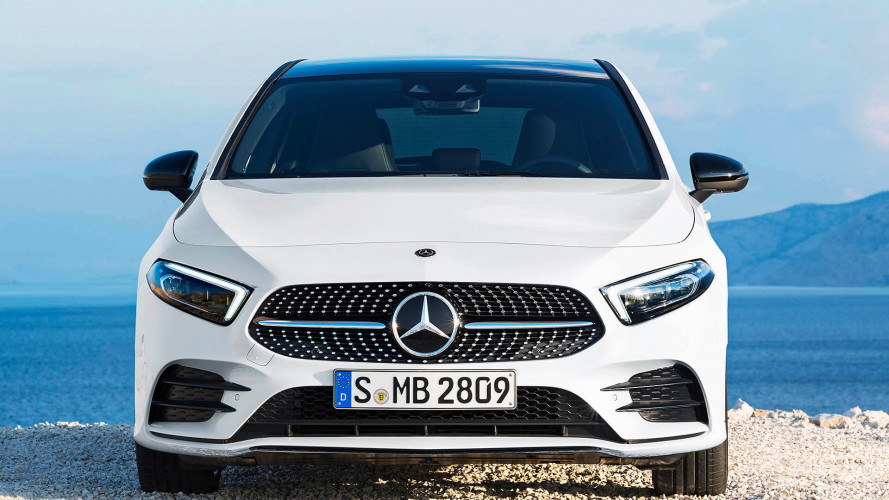 Also implemented in the CLS, Mercedes says the new look is "dedicated to our most progressive cars."

After checking out one of the last teaser images, we had a hunch that the A-Class’ front would end up looking quite similar to the CLS’. It turned out to be a valid assessment as the two cars, despite playing in very different leagues, basically share the same front end design. But that doesn’t mean all future models carrying the three-pointed star badge will get the new fascia as Mercedes has promised to come up with a more diversified design among its models.

Nicknamed the “Predator” face, the sharper headlight arrangement flanking a reversed grille shape will be “dedicated to our most progressive cars,” according to Mercedes’ chief designer Gorden Wagener. Speaking with Australian media at the hatchback’s reveal even last week in Amsterdam, the man in charge with the company’s styling language mentioned the A-Class and CLS (both pictured below) are “very design-oriented” cars. He went on to specify the fact that both are sharing the same face won’t have a negative impact on sales since the two belong to different segments.

When asked about whether future cars from the compact lineup – particularly the GLA crossover and CLA sedan - will carry over the Predator theme, Wagener said these two cars won’t have it. We might add that the same thing can be said about the GLB, which spy shots have shown it will be a boxy crossover with an exterior design inspired by the G-Class. In addition, the B-Class minivan will also take a different approach, judging by what we have seen in recent spy images.

Getting back to the A-Class, Wagener pointed out it was quite tricky to create those triangular headlights, adding these have "actually never been tried before”:

“We squeezed the engineers here quite a bit, but it makes [the A-Class] super aggressive, super high tech and modern looking.”

The jury is still out on which other cars will get the so-called Predator face (A-Class Sedan should be one of them), but Wagener did say the next generation of the C-Class is not on the list. Instead, the W206 will come with a "different face" when it will debut at the beginning of the next decade.

As a final note, it’s worth mentioning “Predator” is also the rumored codename for a hotter A45 derivative set to adopt a hybrid powertrain to generate even more oomph than the regular model’s already confirmed 400+ hp output.