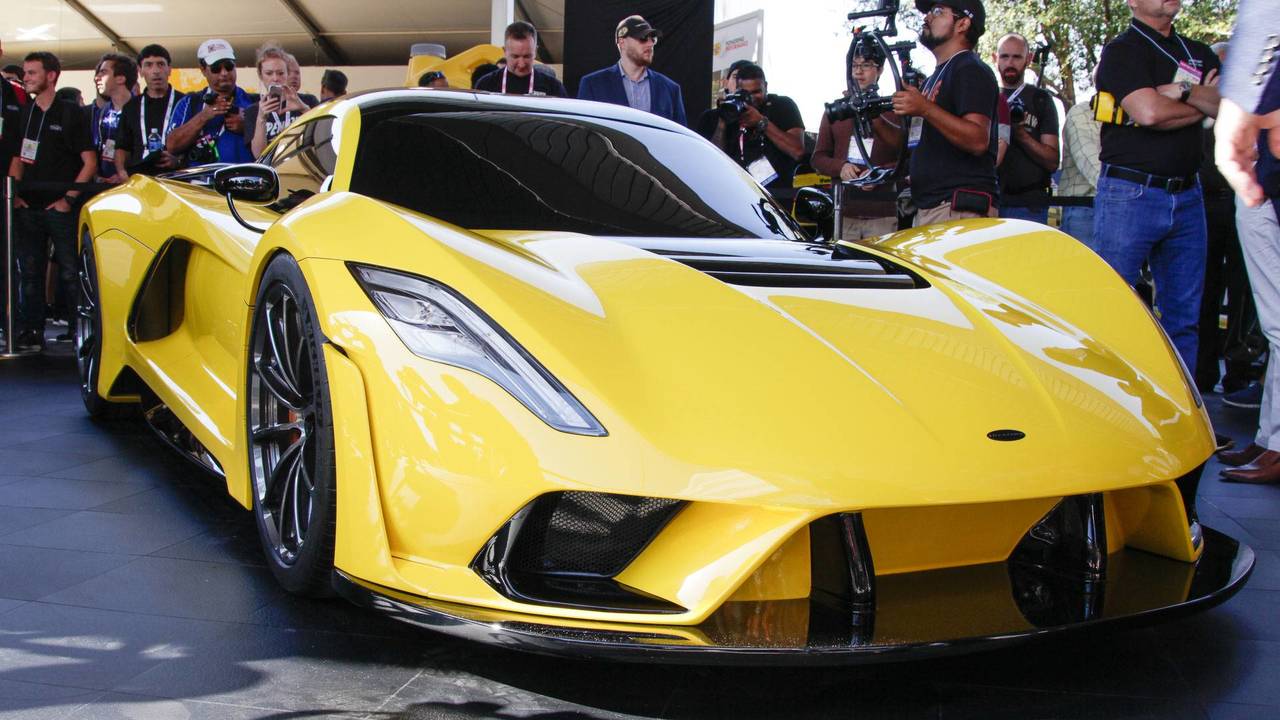 Following a string of teasers, and promises of speeds up to 300 miles per hour (482 kilometers per hour), Hennessey today has debuted its stunning new Venom F5 at the SEMA show in Vegas. Finally. Like the outgoing Venom GT before it, the new F5 is focused on one thing: speed. But unlike the original, Hennessey's latest creation was built from the ground up.

The Venom has plenty of poison

Gone is the Lotus chassis, instead the Venom F5 body comes wrapped around a custom carbon fiber tub. The exterior is also finished in the lightweight material, and the new design makes it a significantly sleeker than its predecessor. The new F5 has a drag coefficient of just 0.33Cd. For reference, the outgoing Venom GT had a coefficient of 0.44 Cd, and the current Bugatti Chiron has a coefficient 0.38Cd.

Don't expect any hybrid powertrain here. "I’m a purist," Hennessey said in an interview with Top Gear. "I like simple, elegant functionality, and that’s not a knock against hybrids, but they’re for the big OEMs to do."

Power comes courtesy of a bespoke 7.4-liter aluminum biturbo V8 pumping out a monstrous 1,600 horsepower (1,193 kilowatts) and 1,300 pound-feet (1,762 Newton-meters) of torque. All that power is sent to a set of Michelin Pilot Cup 2 tires at the rear via a seven-speed single-clutch paddle-shift gearbox. A manual gearbox is optional, of course, but Hennessey says that you’ll be fighting with the GPS-based traction control all the way up to 140 mph (225 kmh).

"I’m a purist. I like simple, elegant functionality, and that’s not a knock against hybrids, but they’re for the big OEMs to do."

When equipped with a special Vmax mode, the F5 lowers its rear wing and seals ducts located just above the spoiler in an effort to improve aerodynamic efficiency. That gives it the ability to sprint to 186 mph (300 kmh) in just 10 seconds, 249 mph (400 kmh) in under 20 seconds, and on to a top speed of 301 mph (484 kmh)… allegedly. For what it's worth, that’s a few seconds quicker than both the Koenigsegg Agera RS and the Bugatti Chiron.

The cabin, coated in swaths of leather, carbon fiber, and Alcantara, is highlighted by an Apple iPad interface, as we've seen teased previously. It's roomy, too; Hennessey promises that it will be able to accommodate a six-foot six-inch football player, as the aforementioned athlete will be one of the first owners.

Just 24 examples of the car will be built at Hennessey's Sealy, Texas facility, each at a cost of $1.6 million – $600,000 worth of options, though, could push it well over $2 million. Potential owners will have to apply and be approved by John Hennessey himself prior to taking delivery of the car.

The new Hennessey Venom F5 makes its debut today at the SEMA show in Las Vegas. Now it’s only a matter of time before we get to watch this monster machine sprint to 300 mph...

Today at the Shell “Pioneering Performance” experience at the 2017 SEMA Show in Las Vegas, NV, John Hennessey of Hennessey Special Vehicles will unveil the much-anticipated Venom F5. Together, Shell, Pennzoil and Hennessey have broken barriers, set records and now they’ve co-engineered the next big thing in the automotive industry - and that’s still just the beginning.

The Venom F5 is an all-new hypercar designed and built from the ground up with one goal in mind: To be the absolute fastest road car on earth. Hennessey and team have developed a completely new design, chassis and carbon fiber body focused on aerodynamics to achieve the lowest possible drag. The new F5 design features active aero that will yield a coefficient of drag of just 0.33.

“We’ve designed F5 to be timeless so that in 25 years it will still have a level of performance and design that will be unmatched,” said John Hennessey, company Founder and CEO. “The F5 is an all new car, designed and built from the ground up, from the engine to the chassis. We expect the Venom F5, named for the most powerful tornado speed winds on the Fujita scale, to be the first road car capable of achieving more than 300 mph and have worked closely with Pennzoil to get us across the finish line.”

The Hennessey team is developing an all new, twin turbo V8 engine that will deliver over 1600 bhp. The Hennessey engine will be mated to a 7-speed single clutch paddle shift transmission and delivering power down to the rear tires. The Venom will also feature an all new light weight chassis and all carbon fiber body, which will give the F5 a curb weight of 2,950 lbs.

The F5’s combination of light weight, low drag and all-American horsepower will deliver a new level of hypercar performance. Acceleration from 0 to 186 mph (300 km/h) will be less than 10 seconds making the new Venom quicker than current Formula 1 race cars. Zero to 249 mph (400 km/h) and back to rest will be under 30 seconds. The top speed of the Venom F5 is projected to exceed 300 mph.

The base price for the Venom F5 is $1.6 million US dollars. The company plans to build 24 road cars.

“Shell is fortunate to have forged technical and co-engineering alliances with some of the most revered automotive visionaries in the industry,” said Patty Lanning, Vice President of Marketing, Shell Lubricants. “Working hand-in-hand with Hennessey on one of the most stunning road cars we’ve seen has been an incredible experience. We share a passion for performance and know that Pennzoil will protect the F5’s engine through development and testing to production.”

In addition to having Pennzoil coursing through the F5 engine, it protects engines in every Hennessey build. Hennessey also relies on Shell V-Power NiTRO+ Premium Gasoline to fuel each of their powerhouses from the test track to the road.

John Hennessey has put his pioneering excellence on full display at the Shell “Pioneering Performance” experience for the remainder of the week at the 2017 SEMA Show. In addition to the Venom F5, Hennessey also brought along a Hennessey VelociRaptor 6X6 and THE EXORCIST TM, based on the 2017 Chevrolet Camaro ZL1.