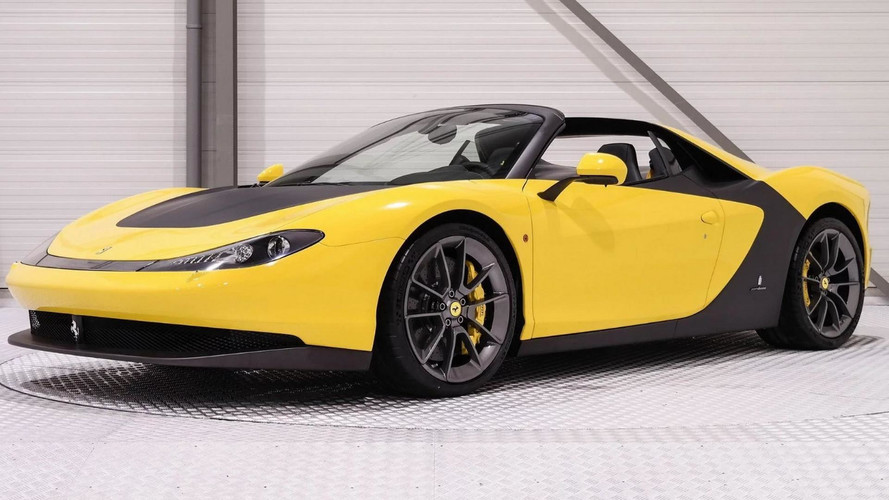 That's about $2 million more than when it was new two years ago.

One of the very few Ferrari Sergio roadsters built is currently available in The Netherlands for anyone willing to pay the hefty price tag of €4,300,000, which works out to approximately $5.06M. It has covered only 73 miles (118 kilometers) and appears to be in pristine condition inside and out. It even comes bundled with a luggage set with stitching that matches the car’s paint.

If you don’t remember the Sergio, it first came out in March 2013 at the Geneva Motor Show where Ferrari and Pininfarina unveiled a concept car (pictured below) as a tribute to Sergio Pininfarina, hence the name. Two years later at the same auto show in Switzerland, the production version was unveiled with sold-out status. Production was limited to just six cars at about $3 million a pop, so in just a little over two years, the asking price has jumped by a massive $2 million.

The exclusive Sergio started life as a Ferrari 458 Spider and then it received a completely bespoke body representing the work of Pininfarina and echoing the design house’s Ferrari creations from the 1960s and 1970s. Painted in red, the first of the bunch was delivered to the SBH Royal Auto Gallery in the United Arab Emirates while three other cars were shipped to United States. As for the remaining two, one was bought by someone from Japan and the other was acquired by a wealthy individual in Switzerland.

This Euro-spec yellow Sergio with a black leather and Alcantara interior was the one to be originally delivered to Switzerland, and like all the other five, it’s powered by a V8 4.5-liter engine. The naturally aspirated mill was actually taken from the 458 Speciale with 605 horsepower (445 kilowatts) and 540 Newton-meters (398 pound-feet) of torque on tap. The prancing horse muscle is good for a 0-62 mph (0-100 kph) run in three seconds.

The Sergio is far from being the only special Ferrari up for grabs as RM Sotheby’s is gearing up for the biggest Ferrari auction ever on the occasion of the brand’s 70th anniversary.