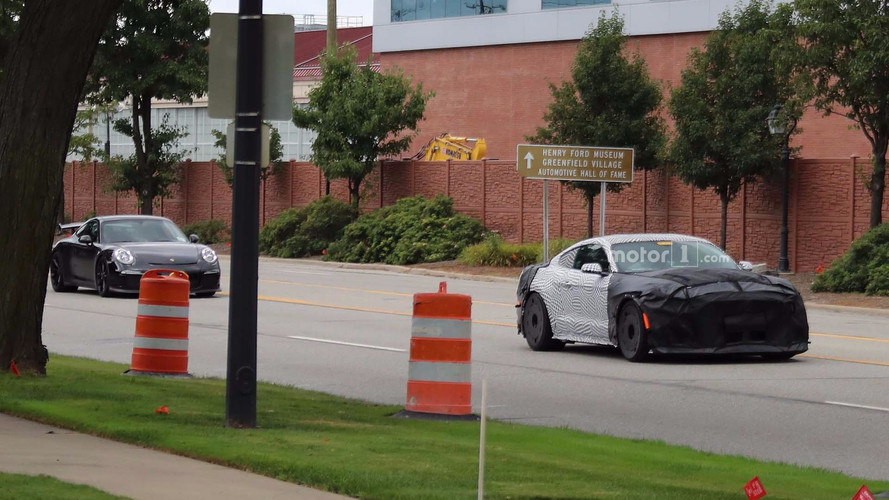 The two cars were spied together near Ford's Dearborn proving grounds.

There’s no question that Ford has upped the Mustang’s game in the last few years, and ordinarily we wouldn’t think twice about seeing a Porsche 911 GT3 tailing a camouflaged prototype. A close look at the photos, however, reveals two very interesting tidbits. Like the covered Mustang, the Porsche is wearing a manufacturer’s license plate. And both are caught making a turn into an area near Ford’s Dearborn proving grounds that's known for Blue Oval performance development. That is very interesting, and it certainly suggests Ford is using the rear-engined GT3 as a benchmark for its front-engined Mustang.

How The Shelby GT350 Drives:

As such, it’s safe to assume that the car under all the coverings is 2019 Shelby GT350. The recently released 2018 Mustang online configurator shows the top-dog Shelby as a carryover from last year, so it makes sense that Ford would have an enhanced version on-deck for 2019. Our sources also tell us this is in fact the next GT350, and we’re inclined to agree.

There’s also a possibility, however, that we’re looking at a new GT500 which is reportedly also in the works. A near-identical prototype caught back in May was thought to be a GT500, showing a bigger grille with a bulging hood just like we see in the current crop of photos. In June we caught a car with covering only on the front that our sources definitively said was a GT500. There is a tantalizing third option – Ford will build both cars. The GT500 could fill the role of horsepower monster to match up against the Dodge Challenger SRT Hellcat and Chevrolet Camaro ZL1, while the GT350 could reprise its role as a track machine. Wouldn’t that be neat?

Whether this car is a future GT350 or new GT500, expect to see more – possibly much more – than the 526 horsepower available in the current GT350. Ford could reveal the true identity of this car in the fall, or possibly at the North American International Auto Show next January.