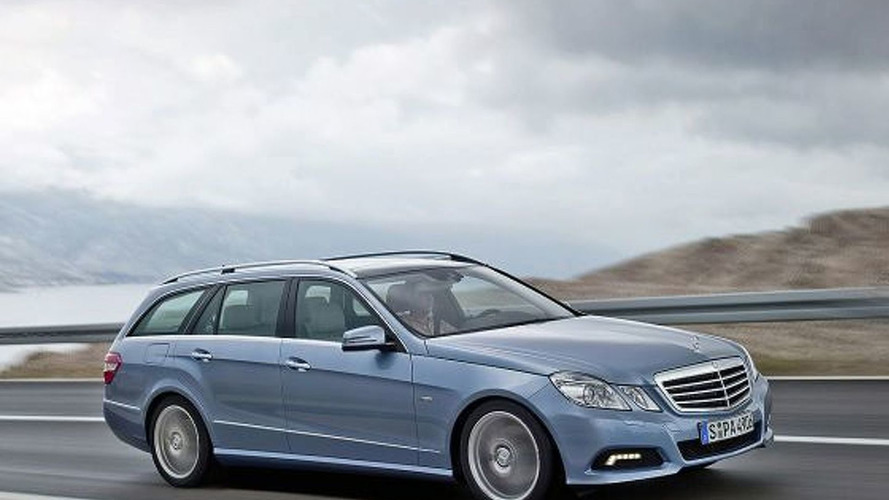 Following yesterday's catch of the 2010 Mercedes-Benz E-Class Wagon almost completely undisguised, the automaker has released official photos of the car.  We don't know if WCF readers Alsuwaidi, in the Middle East, and xLumino, in Switzerland, are to thank for forcing MB's hands, or if Mercedes had always planned to drop the photos today.

What we did not have yesterday was a nice, clear picture of the rear taillights.  Now, we can see LEDs incorporated in the design, which starts on the side panel and wraps around into the hatch.  On one vehicle, we can clearly see oval-shaped dual tailpipes neatly tucked in at the back.  But the beige car appears to hide the exhaust a little bit more than the other model.

The tailgate and cargo cover are expected to open and close mechanically, not manually, on all E-Class wagons.  Overall, the estate is expected to be only a half-centimeter longer than the current model.  Thus, cargo capacity should remain at 1950 liters (68.8 cubic feet).  Inside, we see a somewhat staid layout on the dashboard, that is only cluttered by the tri-tone color scheme of beige, black, and brushed metal.

The car will come with automatic air suspension, active head restraints, seatbelt pretensioners, and nine airbags.  Eventually, the 4matic AWD system will appear, as will other engines.