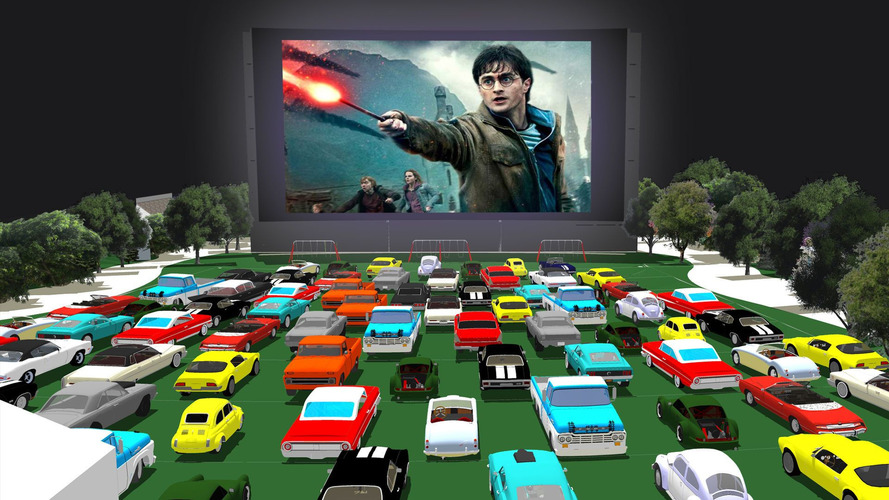 It’s quite likely that most of the people reading this article have never been to an actual drive-in movie theater, and that’s a tragedy. When drive-ins reached their peak in the in the early 1960s there were roughly 4,000 theaters across America. Today there are just 348.

The August Moon Drive-In currently being planned for Nashville, Tennessee, won't up that count to 349. That's because it isn’t actually a drive-in; when it opens in 2018, patrons will park their actual Fords and Chevys and enter a 40,000-foot, air-supported dome not unlike many sports arenas. Once inside, people will purchase tickets that are expected to range from $8 to $20 then proceed to one of several seating areas, which include numerous vintage 1960s cars already arranged in front of what will reportedly be the largest non-IMAX screen in North America.

The whole thing is said to give families a legitimate 1960s outdoor drive-in experience. Grass and trees will surround the cars, with outdoor sights and smells taken straight from a Hollywood movie studio. Even the “sky” will offer sunsets and shimmering stars. Of course, there are other less family-oriented experiences synonymous with the golden age of drive-in theaters, but New York-based entrepreneur Michael Counts – the man behind the August Moon Drive-In – will surely not allow such liaisons.

Counts has plenty of experience in theaters, and he’s signed a letter-of-intent to lease the property where the not-quite-a-drive-in will be built. In addition to the cars, ambience, and massive screen, August Moon will also include dining areas with diner-type food, milkshakes, and because the real cars are actually safe and sound outside, there will be bars for those wanting adult beverages.

We don’t mean to sound pessimistic on such a venture. There are similar venues that combine the typical dinner-and-a-movie date night into a singular experience, and they aren’t bad. And surely there will be people in culturally dynamic areas like Nashville who will enjoy this indoor drive-in experience. But for anyone who’s been to a legitimate drive-in theater, there simply is no substitute for being in the open air – experiencing the sights and sounds under real stars, all from the comfort of your own car.

Still, we certainly wish August Moon the best of luck. Outside of catching one of the 348 remaining drive-ins on classic cruise night, this will be the next best thing.