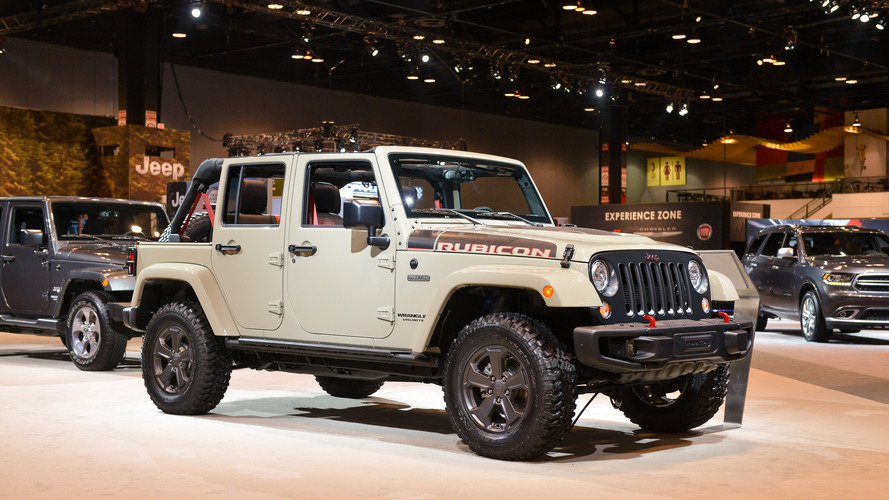 What’s four-wheel-drive and red all over? This special-edition Jeep.

The 2017 Jeep Wrangler Rubicon Recon is equal parts form and function. Arriving as this generation of the Wrangler is on its way out, it builds upon the trail-ready Rubicon trim level with some neat additions. Some of them, like the suspension lift and new hood, are readily evident. Here are several hidden details that you won’t spot unless you get up close and personal with the Rubicon Recon.

These rock rails are shorter in length than the ones on a standard Rubicon. That wasn’t a decision that Jeep took lightly: They’re only shortened so as to accommodate the bigger tires on the Recon (more on that below) without rubbing or scraping the precious rubber.

These 17-inch wheels are new, and are finished in a color called Low Gloss Granite Crystal. But the bigger news (pun intended) is that the Recon wears 35-inch BF Goodrich tires, as opposed to the 32-inchers on a standard Rubicon. Specifically, they’re Mud Terrain T/A tires.

The theme for the Recon is red. That means red accent pieces everywhere: The Jeep badge out front, the mesh nets on the door panels and center console, and even the seat belts. It’s all the better to match the four functional red recovery hooks peeking out of this SUV’s bumpers.

Spec chart on the hood

Part of the reason you buy a toughened-up Jeep is to show off to your friends. What better way than by listing out your Jeep’s parts and specs on the hood? This decal on the Recon spells out various details, like its axles and crawl ratios, to make parking-lot bragging even easier.

Speaking of a red theme, check out these buttons, located to the left of the steering wheel. They control the electronic sway-bar disconnects and differential locks, two key features for making serious progress in rugged terrain. These features are included on the regular Rubicon, of course, but only the Recon has red-painted switches. I suppose that would make it easier to spot them at a glance even if the inside of your Wrangler were caked in mud and grime.