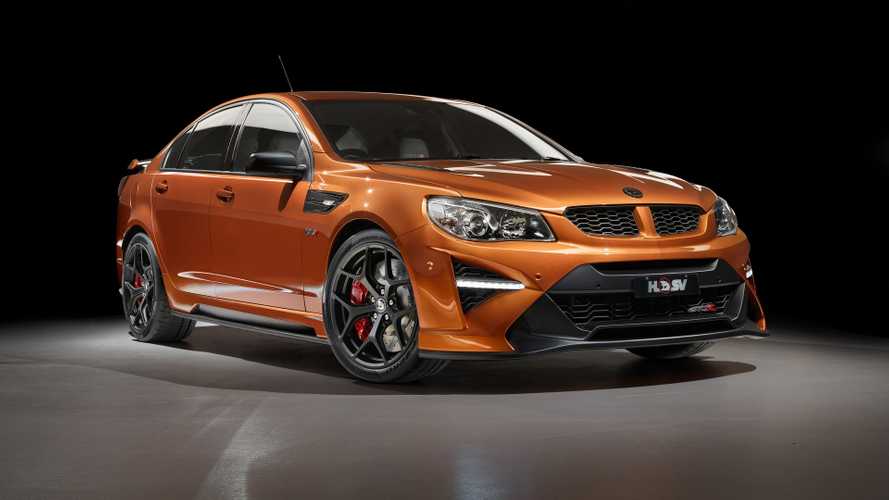 Holden Special Vehicles (HSV) has introduced a trio of hardcore GTSR-badged special edition models to serve as a last hurrah for the long-lasting Zeta platform and also to mark the end of Australian manufacturing of the Commodore set for October 20.

By far the meanest of them all is the W1 limited to around 300 units at $166,990 Australian dollars a pop and rocking a supercharged LS9 6.2-liter V8 engine borrowed from the Chevy Corvette ZR1. It unleashes a whopping 635 horsepower (474 kilowatts), which makes it stronger than a Mercedes-AMG E63 S and its 603 hp (450 kW) generated by a biturbo 4.0-liter V8 engine.

The monstrous power is channeled to the bespoke 20-inch forged alloy wheels shod in Pirelli P Zero Trofeo R tires exclusively through a close-ratio six-speed manual gearbox. Preliminary specs released by HSV are indicating the GTSR W1 will run to 62 mph (100 kph) in around 4.2 seconds en route to an electronically capped top speed of 155 mph (250 kph). Without a limiter in place, the car would max out at around 182 mph (293 kph).

Matching the beast lurking underneath the hood is a considerably more aggressive body with wider fenders, a carbon fiber rear spoiler, and a new diffuser. The interior cabin has been upgraded as well and it now hosts more Alcantara appointments, body-hugging seats, and an assortment of other tweaks to make it stand out from the lesser GTS.

The more attainable GTSR available in sedan ($109,490) and Maloo ute ($96,990) flavors is motivated by a supercharged 6.2-liter LSA Generation IV V8 with (435 kW) on tap channeled via a six-speed manual. At an additional cost, HSV will sell these two with an optional six-speed automatic gearbox worth a premium of $2,500.

To cope with the added punch, HSV has upgraded the brakes of all three GTSR models and these will come as standard with a 6-piston AP Racing brake package with 410-mm front rotors. While the two lesser GTSR versions have the familiar semi-active Magnetic Ride Control system, the range-topping W1 makes use of a newly developed “SupaShock” setup derived from the race-spec suspension engineered by Walkinshaw Racing for the Supercars championship.

“We’re confident we’ve delivered our best product ever, and the greatest performance cars ever produced in this country.”

Talk about going out with a bang…