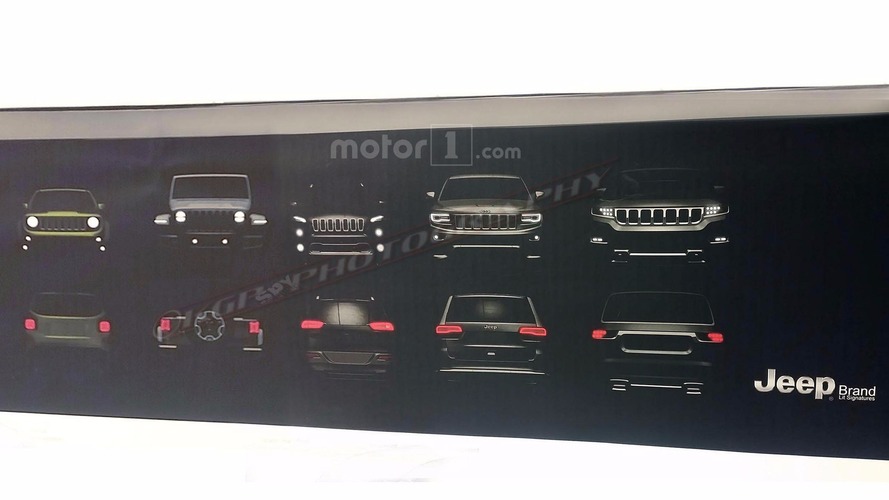 Leaked photos purport to show the next two additions to the Jeep range.

Here’s another look at both the next-generation Jeep Wrangler and Jeep’s planned top-end model, which will likely be called the Grand Wagoneer. These blurry photos come courtesy of an attendee at a recent dealer event, who snapped the photos on a smartphone during a presentation.

The slides appear to show the Jeep lineup from the Renegade through the Wrangler, Cherokee, Grand Cherokee, and Grand Wagoneer (the new Compass is, oddly, missing). It’s the first and last of those vehicles that grabs our attention most, as neither has yet been officially revealed.

The 2018 Jeep Wrangler pictured here adheres pretty closely to what we’ve seen in existing spy photos. Overall, the rough-and-tumble SUV’s design will not change too much, with large, round headlights at either side of a tall seven-slot grille. This model, however, appears to have thin LED running light strips on its wide front fenders – a design cue carried by the Grand Cherokee. Out back, the spare tire will still be affixed to the swinging door; rectangular taillights have a subtle ‘X’ shape inside them, paying homage to the rear lighting on the smaller Renegade.

The next-gen Jeep Wrangler, which we expect to be called the ‘JL’ generation internally, could debut at the 2017 Detroit Auto Show in January. Production of the new model should begin in Ohio early that year. Key changes include a move to more lightweight construction, with some components made from aluminum, as well as the replacement of the Wrangler’s dated five-speed automatic with an eight-speed unit, and the potential for both diesel and hybrid powertrains down the road.

The 2019 Jeep Grand Wagoneer, meanwhile, is a step up from the Grand Cherokee in terms of size and stance. It has a wider face with a more prominent chrome-trimmed grille, as well as all-LED head- and taillights. The rear view reveals a tall, boxy design with twin exhaust tips tucked low in the rear fascia. Though these photos don’t show much so far, it appears this will be a grown-up, more mature take on the Grand Cherokee’s design.

The Jeep Grand Wagoneer will be a six-figure range-topper that takes on the best luxury crossovers from around the world. Built on the bones of the Maserati Levante, Jeep boss Mike Manley has said the Grand Wagoneer project is “moving forward” and suggested that a price tag of $130,000-$140,000 “could be possible.” It could debut in 2018 as a 2019 model. Interestingly, Jeep could conceivably offer two versions of this vehicle: a Wagoneer and a more expensive, more premium Grand Wagoneer.