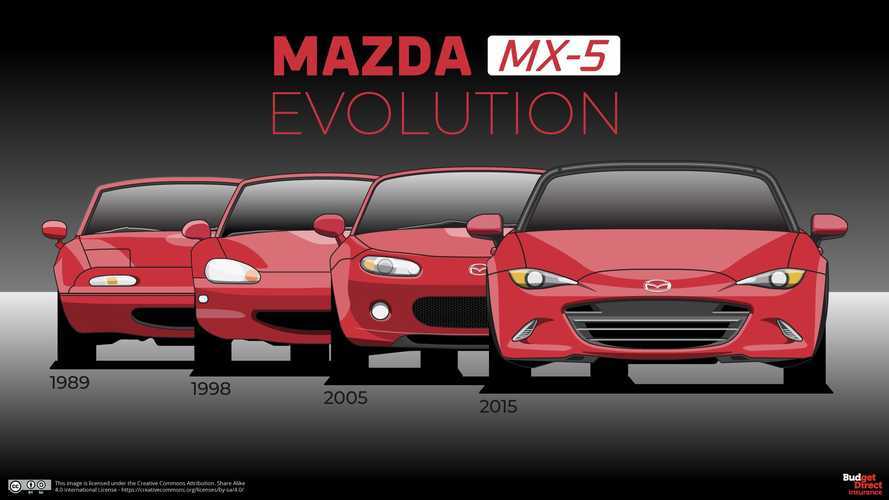 It hasn't changed much over the years, and that's a good thing.

When Mazda introduced the MX-5 Miata at the 1989 Chicago Auto Show, its mission of encapsulating the essence of the classic British roadster was clear. It's formula of light weight and low power was at odds with the horsepower revolution taking place in both the U.S. and Japanese markets, but with 30 years of hindsight there's no denying the Miata was a home run.

It endures to this day as an elemental sports car, appealing to enthusiasts craving a pure, open-air driving experience. Looking through its evolution we see the MX-5's formula has remained true, and in this niche genre that's definitely a good thing. Let's take a closer look at each generation, starting with the very beginning.

Debuting in 1989 for the 1990 model year, the first-gen MX-5 proved that it doesn't take big power to deliver big grins behind the wheel. Its 1.6-liter naturally aspirated four-cylinder offered just 115 horsepower (86 kilowatts), and even with a weight just under 1,000 kilograms (2,205 pounds) it still required approximatey 9 seconds to reach 60 mph. That didn't stop the simple two-seater from being an absolute joy to drive, with the Miata winning the hearts of enthusiasts and numerous awards in the process.

A production delay meant the Miata didn't actually reach U.S. shores until the 1999 model year, but when it did, the pop-up headlights were replaced with fixed units due to new regulations. The NB model also had more power thanks to a larger 1.8-liter engine that arrived during the first-gen run, but developed 140 hp (104 kW) here. A small facelift arrived in 2001, and the NB-generation is also the only generation to see a factory turbocharged model in the form of the 180-hp (134 kW) Mazdaspeed Miata from 2004-2005.

The third-generation NC Miata hit the scene in 2005 for the 2006 model year, still adhearing to the same fundamental formula that made the sports car a smashing success. Fender buldges gave the MX-5 a bulkier, more aggressive stance while more power was standard-issue under the hood. A naturally aspirated 2.0-liter mill dished up 170 hp (130 kW), managed by a choice of five- or six-speed manuals, or a six-speed automatic with paddle shifters. Weight was also up to approximately 2,500 pounds (1,134 kilograms), causing some to question whether the Miata was drifting too far from its roots.

The current ND MX-5 is notable for a couple of significant reasons. Its swooping, curvaceous beltline and sharp angles on the front fascia make it the most distinctive-looking – and arguably the best-looking – Miata of them all. It's also the generation that saw MX-5 sales officially eclipse the one-million mark, easily crowning it as the best-selling two-seat, open-top sports car in the world. Power from its 2.0-liter engine fell slightly to 155 hp (116 kW) but weight also fell by over 200 pounds. From a driver's perspective, the modern Miata is still as delightful as it was 30 years ago.

The Answer Is Always Miata: