More power, more kit, more to love about the Miata.

What can we say about the Mazda MX-5 Miata that hasn't been said already? The lovable, lightweight convertible – now 30 years old in its current iteration – is as good as ever. And for the 2019 model year, the punchier 2.0-liter engine makes it even better.

Our latest tester, a near-fully loaded 2019 Mazda Miata Club, gets that updated engine and then some. Riding on 17-inch BBS wheels, and wielding a retuned suspension, new Brembo brakes, and upgraded Recaro seats (all part of the package), this may be the sportiest Miata we've ever tested. But while enthusiasts will love this Miata for its impressive dynamics, the stiffer, pricier droptop could turn-off some traditional shoppers. 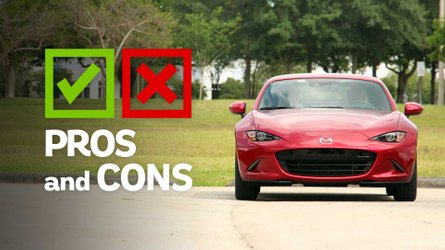 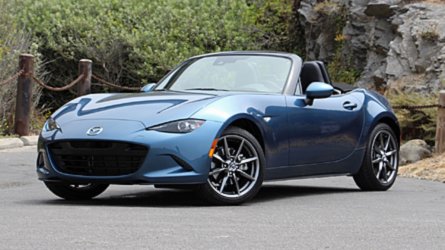 It took five minutes for me to fall in love with the Mazda Miata all over again, having not driven the current version since 2018. The 2.0-liter engine, now good for 181 horsepower and 151 pound-feet of torque (a 26 horse, three pound-foot increase over the pre-facelift 2018 model), gives the Miata more life, the slick six-speed manual shifts quickly, and when you fling this car into a corner it reacts with hilarious precision and composure. The way Mazda tuned this suspension borders on perfection; only the Toyota 86/Subaru BRZ rival the Miata in overall flingability.

But after a week with the soft-top Miata, it gets really tiring to drive every day. Specifically this model, which has the harsher suspension and bigger BBS wheels. The ride is rough, and the removable soft top does nothing to prevent wind, road, and tire noise from penetrating the cabin. Around town it's fine, but on the highway, the Miata is loud as hell. The hardtop RF model makes more sense if you do a lot of highway driving.

The five minutes it took for Jeff to fall in love again with the Miata seems too long. From the first moment behind the wheel of the MX-5, there’s immediate gratification that comes with how special this little car feels. Though great since its introduction in 2016, the MD Miata gets even better with its additional boost. And although 26 horsepower doesn’t sound like much, it makes a substantial difference here. Better yet, revving to redline in first and second gear won’t send you to jail, thanks to this car’s still-modest output. But the Miata’s best quality is how great it is even at six tenths; the short shifter, precise steering, and agile size make it a truly rewarding driver’s car. And while a convertible doesn’t appeal to everyone, the ability to manually drop the top in just a few seconds is a great option to have. This thing rules, and I would take one over an 86 or BRZ every day of the week.

But I wouldn’t drive it every day of the week. Just like your favorite dessert, the Miata is best consumed ever now and then, just not every day. Nothing about it is too intolerable, but there are enough little qualms that can be frustrating. The infotainment controller is too far back on the center console, the car is extremely noisy (even with the top up), and the Recaro seats beat you up during long stints. No sports car is perfect, and while there is absolutely space for one in my future garage, it would have to be parked next to a CX-5 daily.

The Miata has an infectious charm that latches onto you the second you walk up to it. Although Mazda has tried its best to beef up the Club version with lip spoilers, big Brembo brakes, and those stunning BBS wheels, the design still looks cute and approachable. Having spent a considerable amount of time with the original NA generation, I was happy to learn that the current ND loses none of its original fun personality. As my colleagues mentioned, the best thing about driving the Miata is the ability to rev it out in between spotlights without risking spending a night in jail. Plus, this is one of the very last lightweight, manual, naturally aspirated true driver’s cars on sale today, which should help you better swallow its $30,190 asking price.

Unlike my aging colleagues, the Miata’s harsh ride would not be what stops me from daily driving it. Yes, the stiff suspension will jiggle any bit of holiday chunk your new year’s resolution has yet to take care of, and the Recaro seats will make your rear end go completely numb before you get to the office. But the biggest offender for me is road noise. Having a conversation inside of the Miata at highway speeds is a real chore, even with the top up. While its competitors like the Subaru BRZ and Toyota 86 aren’t exactly Rolls Royce-quiet, they are certainly more bearable. However, the incredible driving experience trumps any negative traits the Miata Club presents (many of which could be resolved by opting for the GT trim). In short, although a bit annoying in Club trim, the Miata still manages to be one of my favorite ways to get to work.