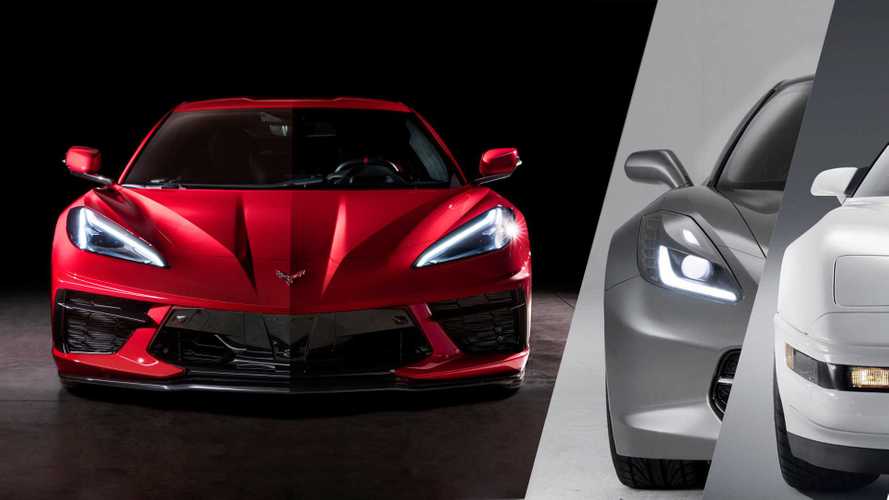 See how the base Corvette from each generation stacks up against the new C8.

The 2020 Chevy C8 Corvette Stingray is here, ushering in one of the most drastic changes in the Corvette's 66-year history – the long-awaited mid-engined layout. Three years of spy photos and wild internet rumors, along with a few alleged setbacks, have all led to this evening as Chevrolet makes the car official. This is the base C8 Corvette with hotter models in the pipeline. However, until those come to fruition, we've decided to look back at each Corvette generation and compare the entry-level offering of each to the all-new C8.

With a 6.2-liter V8 engine making 490 horsepower (365 kilowatts) and 465 pound-feet (630 Newton-meters) of torque, powering the rear wheels through an 8-speed dual-clutch automatic gearbox, the C8 is a far departure from the C1 Corvette that debuted in 1953. The original Corvette packed a 3.9-liter inline-six engine paired with a two-speed automatic gearbox. It made a measly 150 horsepower (111 kilowatts).

The new Corvette is bigger than its predecessor, growing significantly for the first time since 1968. It's fascinating to look back at the previous Corvette Generations and realize the size of the iconic car has changed little. If anything, the wheelbase has grown the most, with a few pounds gained and lost over the years. The C8 Corvette also marks the first time since the C1 that there will not be a manual gearbox at launch.

The mid-engined Corvette has had plenty of false starts over the years, with countless prototypes and concepts teasing such a car. Even from the beginning, Zora Arkus-Duntov, the father of the Corvette, championed the idea of a mid-edged offering. However, it never entered production until now.

The C8 Corvette is here, and, well, it looks a Corvette, even with its mid-engined layout. It's a new standard for the American sports car, and it's more potent than its predecessors. But what do you think? Which is the best Corvette generation ever? How does the new C8 stack up against its new-found competitors? Tell us in the comments below.