Burgess: Out in the woods with the Honda Ridgeline

Camping tent fits in the truck’s bed, not in your heart.

The 2017 Honda Ridgeline needs a bigger bed to carry all of the accolades it has earned. It’s the real deal and a fierce competitor in the midsize pickup segment.

It may also want to consider a bigger bed for people using it as a, well, a bed.

Honda had been showing off its $250-$300 tent accessory that’s custom-made for the Ridgeline ever since the pickup debuted at the Detroit Auto Show. When one came available, I arranged to borrow a truck and took it to Michigan’s Ludington State Park for a car-camping tryout.

The 200-mile trip to Ludington in the Ridgeline was a breeze. The cabin is comfortable, the seats firm and loosely bolstered. The driving position lets you look over other cars but it doesn’t feel as if you’re perched atop a fan boat. The 3.5-liter V6 purrs at 80 mph, and the 280 horses under the hood leave room for more if needed.

But there’s no reason to speed to a camp site. Instead, enjoy the audio system with its eight-inch display and slightly annoying touch volume control. (The easy bypass for the volume is the steering wheel volume button.) The ride is smooth and compliant, so the truck drives smaller than it looks. If you want full impressions on the ride, read the review; I was just going camping. 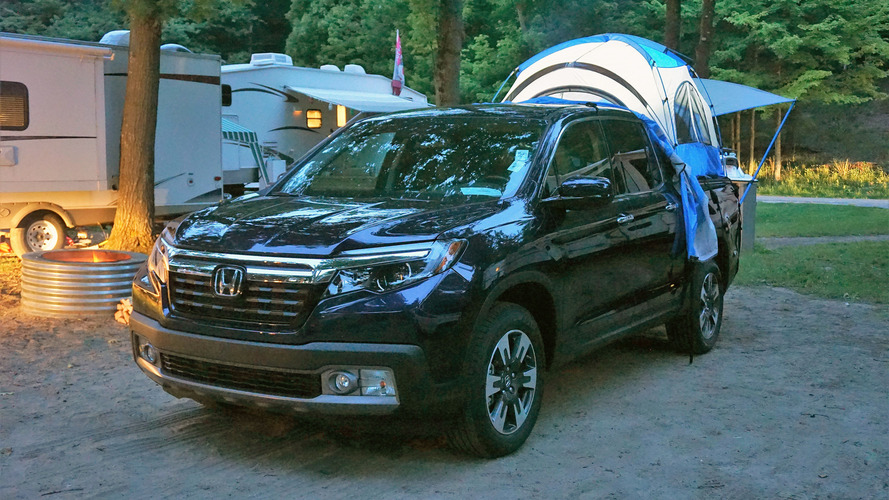 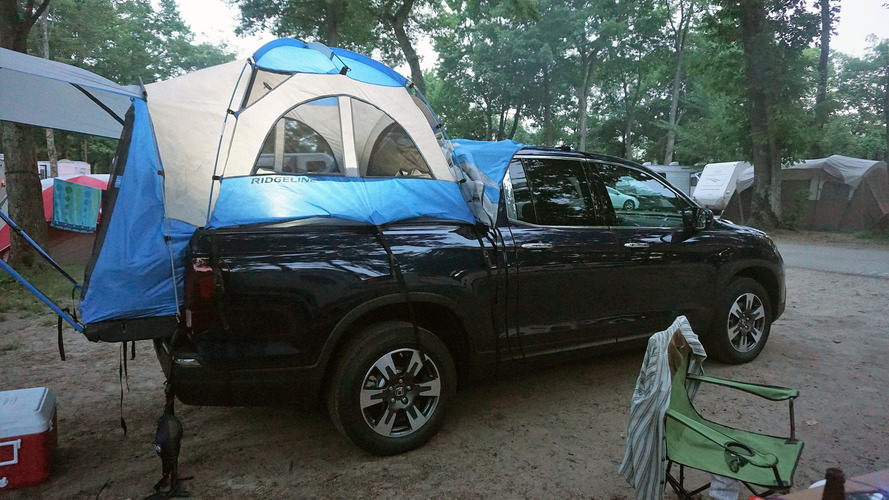 The ride is smooth and compliant, so the Ridgeline drives smaller than it looks.

Turns out, Ludington State Park is one of the most popular in Michigan. There are beaches of white powder. Easy hiking trails covered in shade of beech, oaks, and maples. And, as required by law in Michigan, a lighthouse at the end of one of those trails.

Really, it’s a beautiful place on Lake Michigan, so I wasn’t surprised when I arrived in the early afternoon to find the campground full except my space. Car, or in this case, truck camping has never been my favorite activity. The plots are small and overflowing with trailers, tents, and cars with the constant sound of screaming kids and doors slamming all around you. Ah, nature.

So after surveying the area, I opened up the Honda’s in-bed trunk – using the side opening tailgate – and unloaded. Offering 7.3 cubic feet of space, nearly everything I needed for the two-night trip fit in the lockable compartment, including a cooler and tent.

As far as tents go, the Honda Ridgeline bed tent is pretty big with enough room for two adults. It’s built to fit neatly in the 83-inch-long (tailgate down), 60-inch-wide bed, which also happens to be roughly the size of a queen-sized air mattress – not included. But it is unwieldy to set up and seems to have too many pieces – conveniently colored to make setup easier. It took a full 22-ounce beer, two cigarettes, and one break to fully assemble it. See for yourself in the timelapse video below.

The tent is pretty big with enough room for two adults. It’s built to fit neatly in the 83-inch-long (tailgate down), 60-inch-wide bed, which also happens to be roughly the size of a queen-sized air mattress.

I own a four-person Eureka Timberline, have owned numerous backpacking tents, and spent four years in the Army, where I learned to set up a shelter with a rain poncho and some catgut, and none of those took as much time as the Ridgeline tent.

Worse, if I used any of those other shelters and then wanted to drive over to the overpriced general store for jerky and firewood, I could just hop into the Ridgeline. But when the bed tent is up, the truck becomes a $30,000 foundation.

I set up the tent once at home so I would be familiar with it when I got to the campsite. One set of poles did not like the position I put them in and a fiberglass section split open, requiring duct tape to hold it together. To this day, I do not know what I did wrong in the assembly after studying the provided instructions. The front of the tent also attaches awkwardly to the bed with two straps. You lift the tailgate and run them through the opening between the bed floor, then close the gate and pull them through. If you pull the straps too tight, the entire tent moves rearward in the bed, leaving a gap between the tent and the bed wall.

The good news is that the tent does come with some neat features. There are zipper openings that allow you to to access the 120-volt outlet in the bed for your computer, phone recharging or, in case you travel with certain luxuries, a blender. There’s also a zipper to access the bed’s trunk. You can also take advantage of the bed speakers, which provide excellent sound and drown out drunken neighbors arguing over sportsball. 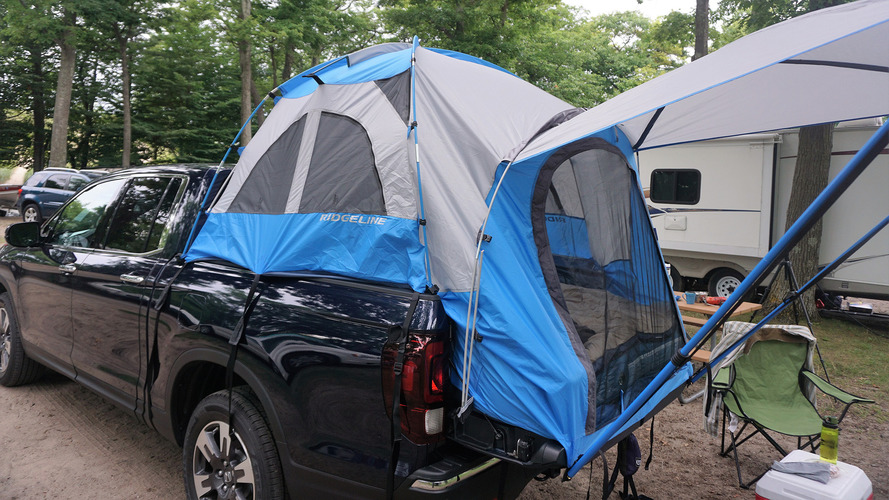 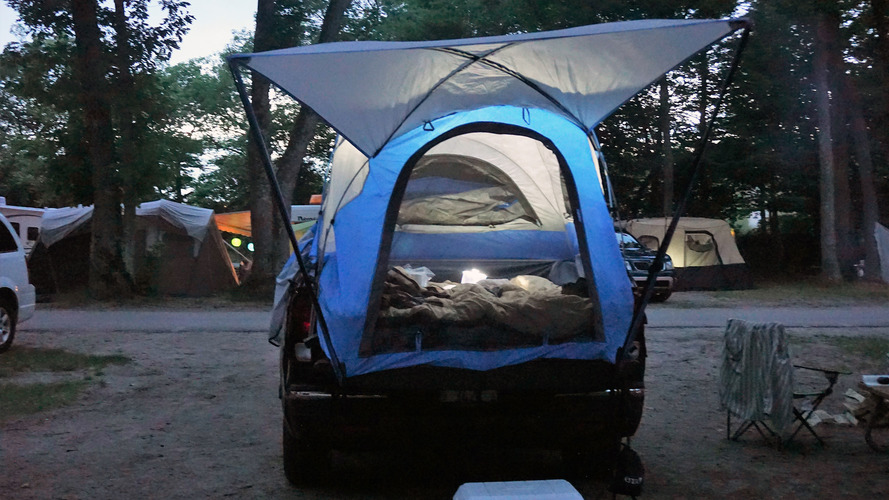 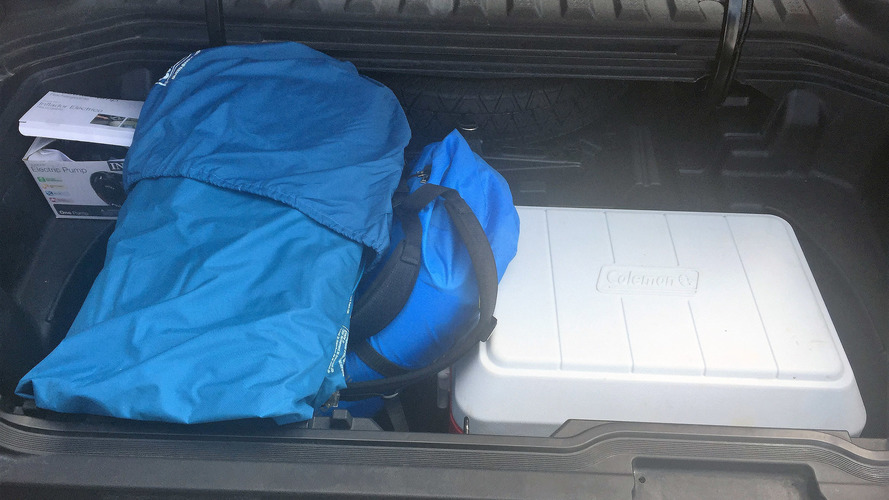 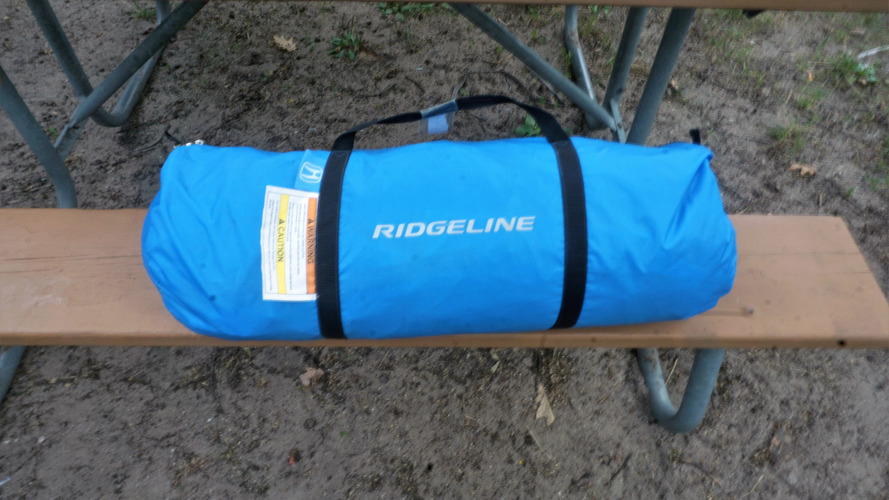 If you really need a tent to match your Ridgeline, get it. But before you do, go to any camping store or military surplus outlet and see what else you can get for $200.

Once the tent was up, it worked well and provided a great place to sleep. Additionally, the tent did a nice job of keeping mosquitoes out. During the assembly, I also put up the second layer to protect against rain and that assembly was much easier, stretching over the tent and part of the cab. It provides a little more privacy.

Finally, in pure car camping luxury, I attached a hammock to a tree and one of the truck’s cargo tie-downs. Perfection for a warm afternoon of doing absolutely nothing. Fortunately, cell service was also nonexistent so I was unable to check emails, answer phone calls, or doing anything else that did not require face-to-face contact.

The concept for the Honda Ridgeline tent is much better than the reality of it. It takes too long to put up and when it’s finally done it looks as if something went slightly wrong. The sides sag and when you fill up the air mattress, it becomes difficult to climb into the actual tent. (I used the cooler I brought as a step and that seemed to work fine.)

It still looks great when professionals set up the tent, which I’ve seen a few times. And now I wonder, what was I doing wrong? Probably nothing. It will be useful for people in very limited conditions, more as a Honda fan novelty than actual camping gear. So if you really need a tent to match your Ridgeline, get it. But before you do, go to any camping store or military surplus outlet and see what else you can get for $200.

If I want great transportation and an excellent all-around truck, I will go to Honda. If I want a good tent, I’ll drive my Ridgeline to REI.