After an interminable wait, Acura’s second NSX is here, and it’s brought the future with it.

There are few spaces quieter than a race track immediately after the last car has killed its engine. The dissonance between an active and still track at Lime Rock Park is especially pronounced, with little but the surrounding woods, farms, and quiet rolling streets to break the newly minted hush. I seemed to hear a low hum as I settled into the post-lap tech talk, but that might have been the vibration of my own body, still charged from the last 130-mile-per-hour run down the start-finish straight.

The 2017 Acura NSX is remarkable in any number of ways: remarkably different than its decades-gone predecessor that shook up the supercar genre; remarkably distinct from the near-supercar class it competes with today. Where the new car nets out has a lot to do with your estimation of the originator of the species and the contemporaries then. But with the tiny bones in my ear singing from a morning on the track, it was easy to appreciate something special in this fresh Acura formula.

The prescription for NSX power has changed dramatically in the second generation of the mid-engined coupe. In fact, while it’s true the the engine still resides between the cockpit and the rear axle, the powertrain has spread the length of the total wheelbase. Gasoline-burning power comes by way of a turbocharged 3.5-liter V6 engine that, of its own accord, creates 500 horsepower and 406 pound-feet of torque. The fun doesn’t stop there. In the same engine bay you’ll find what Acura calls the “Direct Drive Motor,” an electric power unit that sends another 47 hp and 109 lb-ft of torque directly to the crankshaft. Following the flow of power forward you’ll find a “Twin Motor Unit” on the front axle which supplies a maximum of 36 hp and 54 lb-ft to each of the front wheels, when traction demands call for it. (You know you’re having a good time when one of those motors is chugging.) 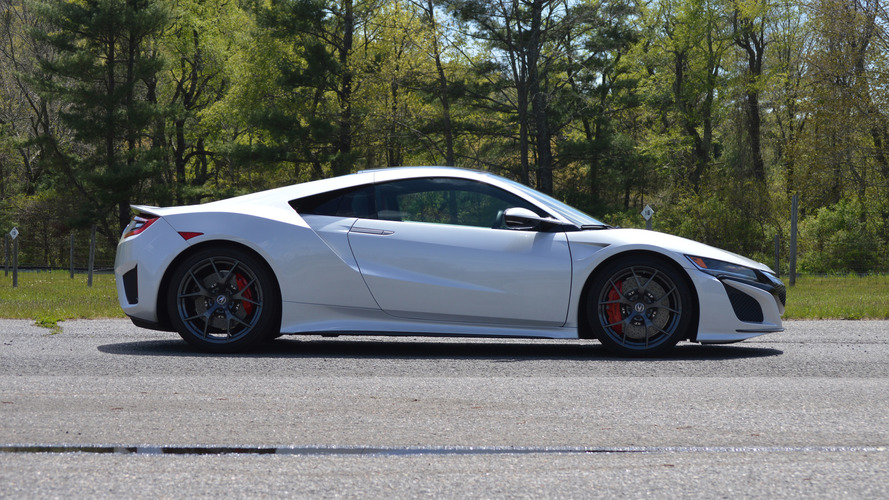 The prescription for NSX power has changed dramatically in the second generation of the mid-engined coupe.

The vagaries of electric motor power and torque outputs, and the situational nature of the NSX’s distribution of motive force mean you can’t simply add the numbers together to reach a total. But the final maximum figures hit 573 hp and 476 lb-ft for the system. All of the power is routed through a nine-speed dual-clutch transmission, that hangs, in the finest mid-engined tradition, at the very back of the powertrain.

We probably just lost the so-called “purists.” But the fact of driving Acura’s intricately driven NSX is a compelling preview of how sports cars will exist in the years soon to come. Porsche, McLaren, and Ferrari have all already dived deep into the world of performance electrification for their flagship models, as has Formula 1, of course. And while Acura’s implementation isn’t quite so potent as those examples, it is unbelievably quick.

The Direct Drive Motor serves up torque to supplant the dead spots of the gas engine. That means that, especially under 2,000 rpm, the NSX has impressive acceleration. I tried a handful of launch-controlled starts in the car, and got a giddy, tingling-in-the-chest feeling that reminded me of the pre-Ludicrous Mode Tesla Model S. Acura doesn’t have an official 0-60 time for the car, but the estimates of about 3.0 seconds seem completely believable. Hell, if someone told me they’d clocked it a half-second quicker, I wouldn’t raise my voice to argue. 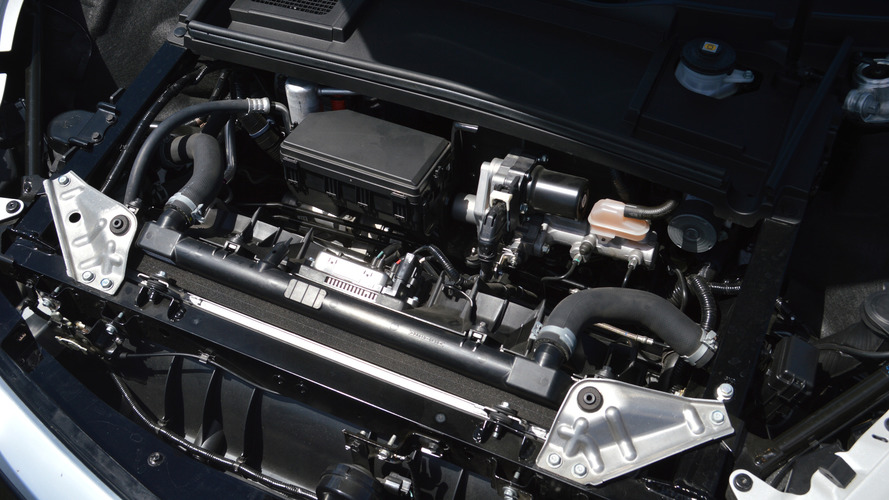 I tried a handful of launch-controlled starts in the car, and got a giddy, tingling-in-the-chest feeling that reminded me of the pre-Ludicrous Mode Tesla Model S.

But the fill-in torque helps to characterize the powertrain all the way up the rev range, not just during that initial, impressive jump. There’s a feeling of linear power delivery, not unlike that found in a naturally aspirated engine – albeit an NA engine of otherworldly capacity. Lime Rock has a very quick, downhill right-hander leading into the straightaway, and the speed with which I was able to cover that stretch of asphalt was almost more impressive than the chest-compressing launch.

Don’t forget about the twinned electric motors up front – they may be small of output but their combined effect on the near-limit handling of the NSX is impressive. Acura has been correctly lauded over the years for the advanced torque vectoring of its SH-AWD system, and this execution is a natural extension of that. Each of the compact units can deliver force to its respective wheel, advancing acceleration, and/or creating a “yaw moment” to neaten up your corner. The system created two nifty experiences for me: first it allowed for tremendously rapid power delivery on corner exit; second it allowed me to quickly recover if I’d botched my line in or out of a particular turn. Essentially, though the NSX is far from light weight at 3,803 pounds, the technology allowed me to “drive lighter” – far simpler than going for a run every morning.

In this class of competition (more on that in a moment) it should almost go without saying, but the advanced structure of the NSX ensures that every corner is taken utterly flat, too. Even with the drive mode settings in the most pedestrian “sport” configuration, the car felt unfettered by undue suspension softness or wobbly behavior under a G-force load. All that and, over the routine stretches of broken pavement I found on our street drive, ride quality is far from brittle. 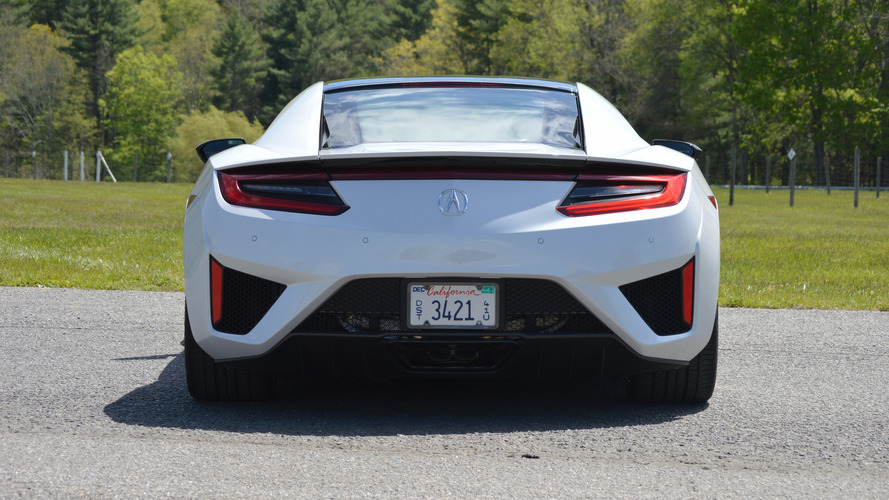 The lack of steering feel doesn’t really affect high-speed performance on highways and fast roads, but it didn’t help me connect emotionally with the car, either.

Unfortunately the portion of my drive that took place on public roads also revealed some weakness in the NSX game. In the track environment, and at high speeds, communication about levels of grip, especially from the fat rear tires, was adequately telegraphed via seat-of-the-pants feel; there was informative vibration happening by way of the body and chassis. But at saner speeds on regular roads, the lack of steering feel becomes far more noticeable. Where Acura has done a fantastic job normalizing the brake pedal feel for its regenerative, by-wire stoppers, tuning for the electric power steering isn’t as successful. In your standard Sport mode, as well as the limited, electric-only Quiet mode, the steering feels very light and sadly numb. The weighting changes helpfully in Sport+ and Track, but the feedback is still missing.

The lack of steering feel doesn’t really affect high-speed performance on highways and fast roads, but it didn’t help me connect emotionally with the car, either. Some of my fellow journalists marked out a lack of personality overall for Acura’s super coupe – and I wouldn’t go that far – but I will say that without the time on the track my feelings about the NSX might be cooler.

Clearly, Acura put a lot of effort into recapitulating the original NSX’s reputation as the “everyday supercar.” And I think this 2017 joint meets that criteria. Even at six-foot, five-inches tall, and wearing a helmet at times, I didn’t find the car’s cabin too close to do work in. Not only are the seats excellent – though I prefer the set with Alcantara inserts to the full-leather jobs – they allow for a huge range of articulation with a perfect forward view. At no point was the chunky flat-topped and bottomed steering wheel impeding my view through the windshield or of the gauge cluster. Fit and finish in the cabin seems impeccably well done, if somewhat restrained in the genre of six-figure sports cars. 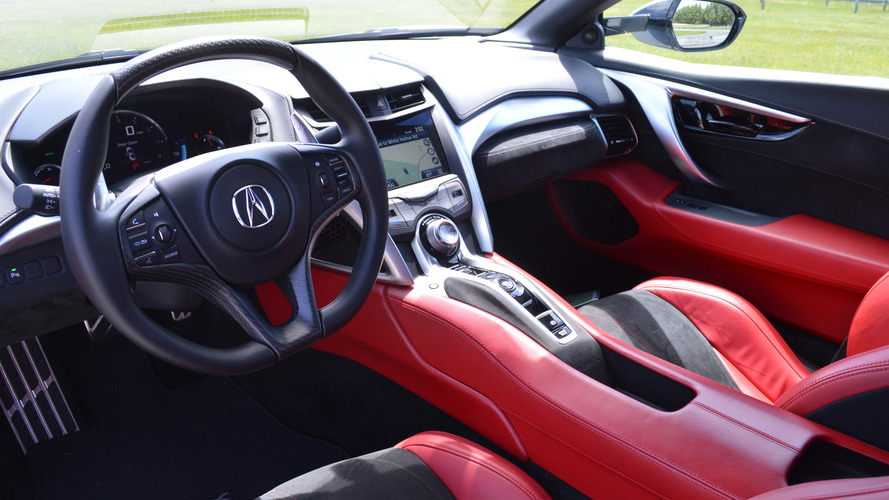 NSX buyers will have to suffer the fact that their infotainment screen and controls look to have been plucked whole from the Civic.

NSX buyers will have to suffer the fact that their infotainment screen and controls look to have been plucked whole from the Civic, and deal with certain technology deficits like no head-up display. I also find it laughable that, at $156,000, the base NSX doesn’t come with standard navigation, but there are worse inequities in the world of high-performance luxury vehicles, I suppose.

Acura used a slide in its technical presentation that showed the tail of a first-gen NSX through the windshield of the new car – the new literally following the old. Back in 1990 there was a bright line between Acura’s supercar – with a light, precise gearbox, a strong reputation for reliability, and easy everyday driving manners – and the exotic coupes it competed with. The Porsche 911 Turbo was in that mix, then as now, but so were underwhelming, difficult cars like the Ferrari 348ts and the Lotus Esprit Turbo (when you’re finished here I highly recommend revisiting Patrick Bedard’s 1990 comparison test). The NSX barnstormed the old guard by making speed approachable, and consistent; more good fun than hard work.

There’s no mistaking the ways in which the NSX is distinct from other expensive and capable sports cars.

Today, the idiom has changed to follow the trail blazed by that novel NSX formula. Cars like the Audi R8 V10, and the latest 911 Turbo can be daily driven without issue, and yet taken to a track day to explore their sky-high dynamic limits. So while the 2017 NSX does, in fact, follow it’s predecessor’s recipe for ease of use, that’s less of a novelty now than it was 30 years ago. For car guys like us, that’s great; having a few terrifically quick and livable options in the $160K-ish coupe ‘segment’ is no bad thing. But making the case for the NSX becomes more difficult for that fact.

With its wildly advanced powertrain and show-stopping looks, there’s no mistaking the ways in which the NSX is distinct from other expensive and capable sports cars. But the decision to put one in your garage, it seems, must be more personal than ever. Still, I think the technology story of the car, its idiosyncratic heritage, and its flabbergasting performance will find it quite a few happy customers. Hopefully a sharp tool in the hands of an enthusiastic driver; one willing to drink in the quiet satisfaction of a cooling track after a session with Acura’s scalding new halo car.