Quiet and confident; this revision to one of the small-crossover segment's best sellers is surprisingly compelling.

The new 2017 Ford Escape doesn’t look a whole lot different from the outgoing model. That’s okay, though. When an automaker releases a new vehicle that is more of an evolution than a revolution, that usually means the foundation they’re building on is strong. It’s a formula that works. Such is the case with the new Escape.

Following Up On The Escape:

The big aesthetic change up front is the new grille (with active shutters). The Escape has a wider stance than before, and new wheel designs help give it a sporty look. There are also three new paint colors: a bright Lightning Blue, a brownish-orange Canyon Ridge, and White Gold, which is more gold than white. They look better than they sound.

Two EcoBoost engines grace the Escape lineup, in addition to the naturally aspirated 2.5-liter I4 (which I didn’t have the opportunity to sample). The twin-scroll 2.0-liter EcoBoost engine is a potent powerplant. With 245 horsepower and 275 pound-feet of torque on offer, putting the pedal to the floor is enough to push you back in your seat. It makes getting up to highway speed a breeze, and overtaking other cars is similarly simple. Combined with the good view in all directions, the punchy motor makes the Escape great at dicing through highway traffic.

Even the 1.5-liter EcoBoost is plenty plucky in the new Ford. While it’s not quite as capable as the 2.0 in making mincemeat of other cars on the highway, it’s got more than enough eagerness to make your daily commute quite entertaining. It was perfectly happy to zoom through the hills above Malibu, particularly with the gear selector in Sport mode. Making use of the paddles mounted on the back of the steering wheel cranks the fun level up a notch, and also helps to maintain proper speeds both up- and downhill. 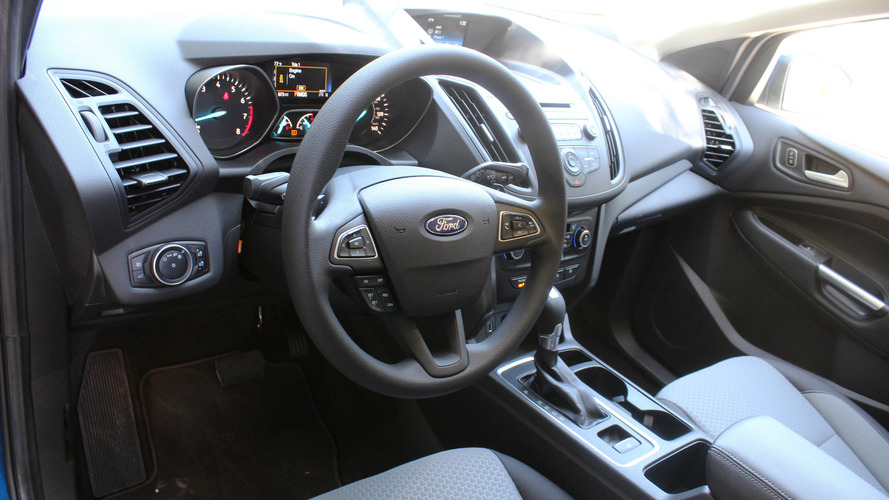 If driving is how you get your kicks, you could do a lot worse than the Escape. The steering is pleasantly responsive and direct with a crisp turn-in. While maybe not the most progressive in terms of weighting up in the corners, sawing back and forth required little effort and no thought. It was intuitive and quick, making easy work of the varying degrees of curves in the southern California hills. The car feels light and chuckable, and combined with the pep of either EcoBoost engine, it’s hard to imagine getting bored behind the wheel of the Escape.

Ford has branded the new Escape with the phrase “Be unstoppable,” presumably referring to the owner’s lifestyle. As for the vehicle's brake pedal, it responds sharply to a bit of pressure from the driver’s foot. Having that sort of stopping power on hand inspires confidence, and while it took a few miles to get used to the sensitivity of the pedal, it complements the overall athletic feel of the engine and steering. Unstoppable I may be (at least after my second breakfast), but the car does a fine job of it.

While there’s plenty of fun to be had in the new Escape, its high level of refinement for the segment is another box the little ute checks with a confident hand. This car is quiet. Eerily quiet (as in, don’t be surprised when YouTubers start posting ASMR videos from the back from the back seat of a moving Escape). Ford did a lot to improve the interior experience through things like side acoustic glass, better sealing and sound deadening materials, and even more aerodynamic side mirrors. The result is a cabin in which you can carry on a quiet conversation at highway speeds. I also noticed that, over a long day of driving, I was more energized than I usually feel after so many miles. If, like me, you’re sensitive to a lot of noise, you’ll find it easy to spend extended periods of time inside the Escape.

If you do sit in the CUV for a while, good news: the chairs are comfortable. The firm padding and nicely shaped bolsters wrap around you to keep you safely in place. I felt well supported throughout the drive, and minimizing the amount of motion one’s body is doing through the corners not only helps maintain a physical level of energy, it also makes the Escape easier to drive. It’s a lot less effort and drama to steer a car when you’re held still, in a good driving position, behind the wheel. Having to lean and reach through the curves does nobody any good. 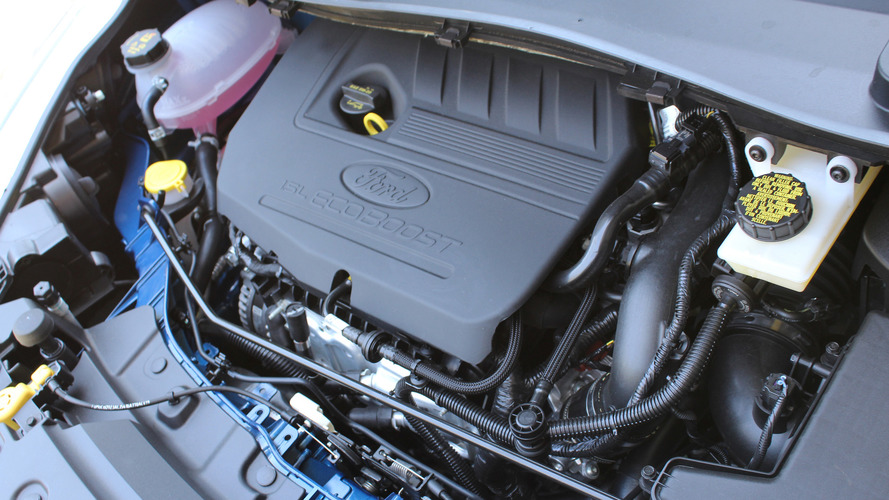 The suspension strikes a nice balance between sporty and comfortable. You don’t get the sensation of riding on air, but there also isn’t that feeling of complete separation from the road. The car definitely lets you know what’s going on via the seat of your pants. At the same time, though, it feels smooth. It’s not jarring, and it handles rough roads and speed bumps without bouncing the occupants around. Some of the higher frequency vibrations make their way into the cabin, but the general sense is one of isolation from most of the sort of motion one finds to be bothersome when it comes to a comfortable ride.

Ergonomically, the cabin is an improvement over the outgoing Escape. Ford deleted the mechanical handbrake, opting instead for an electronic button (you weren’t planning on pulling e-brake turns anyway, right?). While it frees up room for the designers to create a more useful center console, with more spaces to stash your smartphone, and cupholders designed to accommodate a variety of beverage containers. The things you touch throughout the cabin are mostly easy to reach, and use pleasant-feeling materials. The main audio controls in the touchscreen-equipped models look oddly placed, but once I had them figured out, I found them easy to use without taking my eyes off the road. Plus, they’re not in a spot that will accidentally get bumped when making use of those aforementioned cupholders.

The third piece to the puzzle, besides sportiness and refinement, is technology. The 2017 Escape is equipped with the streamlined and easy-to-use Sync 3. Forestalling complaints from brand loyalists, Sync 3 supports both Apple CarPlay and Android Auto. I took the opportunity to tinker with the CarPlay feature (in part by dictating playfully insulting text messages to Motor1 Executive Editor, Seyth Miersma), and found it to work smoothly (unlike Motor1 Executive Editor, Seyth Miersma). The Titanium trim level’s eight-inch capacitive touchscreen made it easy to browse and swipe through apps. It’s a bit like having a tablet device imbedded in the dashboard. Mercifully, Ford makes it super easy to return to the car’s infotainment home screen while using CarPlay or Android Auto. 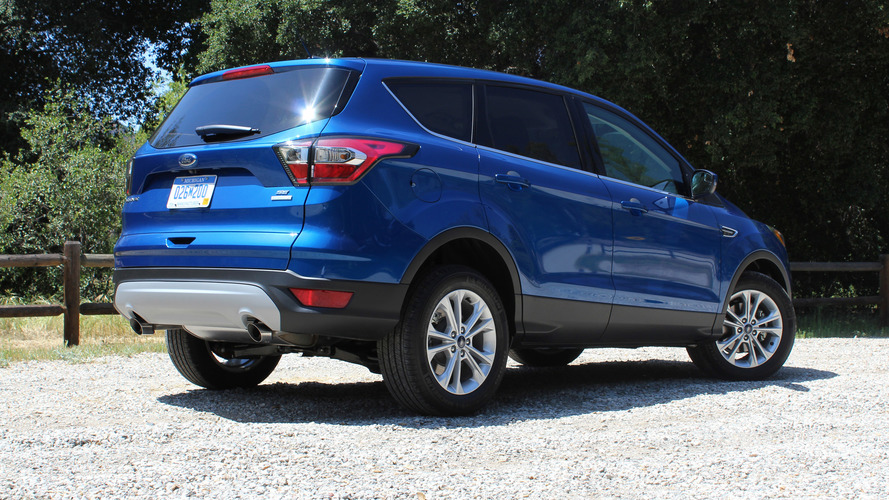 Also on offer are a number of driver assist technologies. The new Escape has available adaptive cruise control, lane keeping assistance, blind spot monitoring, cross traffic alert, and a driver alert system. The adaptive cruise control works smoothly, with four distance options. It’ll slow the car down with traffic as slow as 16 miles per hour, too.

The entry-level Escape comes with a naturally aspirated 2.5-liter I4 and front-wheel drive, starting at $23,600. Both EcoBoost models are available in front- and all-wheel-drive configurations. The S trim level includes the base equipment, which includes cruise control, steering wheel audio controls, and a backup camera. Going up to the SE adds the stop-start, fog lamps, dual-zone climate control, paddle shifters, and, among a few other useful features, several appearance upgrades. The Titanium trim has even more aesthetic improvements, 18-inch wheels, that big, useful touchscreen with Sync 3, heated front seats, and driver assistance features like blind spot monitoring. Then of course, there is the adaptive cruise control package, as well as a panoramic vista roof option.

Also kind of impressive in this segment (at least on paper, as I didn’t get the chance to use it) is the Escape’s towing capabilities. With the $495 Class II tow prep package, the 2.5-liter Escape can haul up to 1,500 pounds, while the 1.5-liter EcoBoost model can tow 2,000 pounds, enough for a trailer and two fueled-up Jet Skis. The 2.0-liter EcoBoost can tow a respectable (for this class, anyway) 3,500 pounds. Compare that to the Nissan Rogue and Hyundai Tucson (1,000 pounds), the Toyota RAV4, Subaru Forester, and Honda CR-V (1,500 pounds apiece), or the Mazda CX-5 and Jeep Compass (2,000 pounds). Maybe you’re wondering how many people will actually tow anything with the Escape, but for a lot of owners — like many in Ford’s home state of Michigan — being able to drag a bass boat to the lake or a couple snowmobiles Up North with your daily driver is crucial. If only the car came in forest camo.

While I am impressed with Ford’s execution of the new Escape, my inner LeVar Burton compels me to remind you, dear reader, that you don’t have to take my word for it. You’ll be free soon enough to head down to your local dealership and request a test drive, and Ford will be happy to oblige. If you’re shopping this segment, you should absolutely cross-shop the new Escape. You might very well end up buying a Subaru Forester or a Mazda CX-5, but if you do so without taking a look at Ford’s offering, you’ll be correct in wondering forevermore if you missed out on a great thing.