In my house, complaining about the BMW 4 Series’ controversially enlarged kidney grille is a crime punishable by swear jar. That’s not because I find the styling attractive (I don’t) but because those gripes are so unoriginal and perpetual that they’re rapidly turning into white noise. Luckily, there’s a new 4 Series variant that may quiet the din: the slightly more graceful, significantly more practical Gran Coupe.

Applying the company’s four-door fastback shape to the 4 Series improves it in just about every way, balancing out the design by toning down the schnoz slightly and elongating the roof. The Gran Coupe also gets more passenger space, and the liftback improves flexibility. Available in 430i rear-drive and M440i xDrive variants, it even costs a couple hundred bucks less than the equivalent two-doors. Spending a few hours behind the wheel of the entry-level Gran Coupe has me convinced it’s the brash Bimmer to buy.

BMW thinks most folks would like the 4 Series if they saw it in person, but that didn’t stop designers from giving the Gran Coupe a little tweak. There are new front fenders that incorporate hockey-stick accents, a slightly more upright grille, and a reshaped front bumper on cars without the M Sport styling package. A flat strip under the door glass results in a more prominent Hofmeister kink on the rear quarter window, resolving what was, in my mind, the 4 Series’ worst styling misstep. The bulging front and rear wheel arches carry over to the Gran Coupe, though BMW’s signature crisp shoulder lines are still absent.

The Gran Coupe rides on the same 112.4-inch wheelbase as the two-door, and at 188.5 inches, it’s only 0.6 inches longer overall. The liftback is 2.0 inches taller however, reducing claustrophobia and improving headroom. The front doors have been shortened to make space for a pair of rear apertures, and a rear hatch opens to 16.6 cubic feet – up from the coupe’s 12.0. That number also doesn’t account for the Gran Coupe’s ability to stow the cargo cover and stack things all the way to the glass (properly secured, of course).

Practicality-wise, the 4 Series Gran Coupe splits the difference between the 3 Series sedan and its two-door equivalent. With 38.6 inches of front and 36.6 inches of rear headroom, the GC is up 0.6 inches on the coupe in front and 1.4 inches in back (though down 0.1 inch and 1.0 inches on the 3er, respectively). Legroom goes up to 41.9 inches up front and 34.9 inches in the back, improvements of 0.1 and 0.4 inches compared to the coupe. Overall, the fastback four-door feels a bit more stretch-friendly than the two-door for front-seat passengers, while rear-seaters are vastly more comfortable than they would be in the coupe.

Even so, the back isn’t a great place to spend time. With the driver’s chair set for a long-legged 6-footer, there’s just enough legroom for a similarly sized passenger in back, though toe room underneath the front row is commendable. The biggest problem is headroom, which is adequate only if you’re under 5-foot-9. Some blame likely goes to the standard sunroof, which is larger than it was on the previous-gen Gran Coupe. The mechanism eats up a fair amount of space in the headliner over the rear seats.

The interior is otherwise standard fare for the 3 and 4 Series. Perforated Sensatec leatherette upholstery comes standard, but the vehicles I drove wore optional Vernasca leather upholstery that felt very nice. Materials are generally good, with hard plastics appearing only on the B-pillar trim and lower door panels. The design features a 10.3-inch display canted toward the driver, with either the touchscreen or an iDrive controller carrying out infotainment commands. A redundant HVAC control binnacle is subtle yet also easy to use, making small climate adjustments a cinch (more complex operations require a trip to the iDrive display). 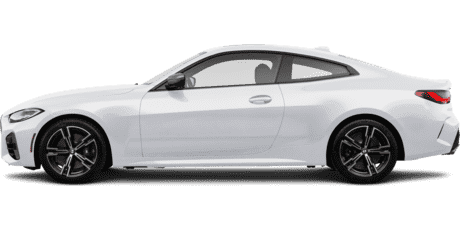 Sit Back And Relax

Like the two-door, the 4 Series Gran Coupe isn’t necessarily a hardcore sports car, but that doesn’t mean it isn’t a capable machine for a canyon drive. The rear-drive-only 430i comes with a turbocharged 2.0-liter inline-four making 255 horsepower and 295 pound-feet, more than enough for daily driving and the occasional romp up a twisty road. BMW says the turbo four can rip to 60 miles per hour in 5.8 seconds. Those who demand the most will want to budget for the M440i xDrive, which swaps in a turbocharged 3.0-liter inline-six and all-wheel drive, good for a sprint to 60 of 4.4 seconds thanks to 382 hp and 369 lb-ft.

Although the four-cylinder is adequate for most driving duties, the smooth and snorty six is a much nicer companion. The 430i has a slightly gruff, agricultural engine note when you rev it out, while the M440i is far sweeter at high engine speeds – typical of a Bavarian straight-six. It’s also impossible to ignore the effects that 177 extra horses have on the M440i’s momentum accrual, meaning it feels much faster both when hammering down a back road and merging onto a freeway.

Even so, both Gran Coupe variants feel much better suited to relaxed driving than a maximum-attack approach. The steering is aloof and overboosted in its normal setting, with Sport and Sport Plus ratcheting up the effort but not the feel. There’s some understeer as the chassis approaches its limits, and unlike BMWs of the past, it’s not easy to balance the 4 Series by lifting off the throttle or gently applying the brakes. And the car isn’t particularly eager to change directions, a dynamic trait that pays dividends in stability at the expense of B-road prowess.

Where both the 430i and M440i xDrive excel is on a long trip. Like any Bimmer worth its salt, the suspension is smooth and well-damped over minor imperfections, giving way to larger dips and divots with a muted thump that takes most of the edge off. Visibility through the rear backlight is limited, but the side quarter windows improve matters when changing lanes. And that sunroof that eats into rear passenger room? It’s actually pretty great if you’re up front, giving the cabin an airy, illuminated feel.

As such, it’s hard not to see the appeal of the adequately powerful and cheaper 430i. Unless you absolutely need all-wheel drive and stoplight bragging rights, the four-cylinder Bimmer is nearly as entertaining and just as comfortable while saving $13,000 off the starting price.

With similar performance, more cabin room, and better styling than the regular 4 Series, the Gran Coupe is an objectively better car, so you might expect it to cost more too. And you’d be pleasantly surprised to learn that compared to its 430i and M440i xDrive two-door siblings, the four-door hatch is actually $600 and $500 cheaper, respectively.

The 430i Gran Coupe I drove started at $46,195 with $995 destination, a reasonable price for the hardware on offer. Loaded down with M Sport suspension and styling bits, leather interior upholstery, Sunset Orange metallic paint, a heated steering wheel and seats, and active parking assistance, it rang the final bell at $57,295. Were it my cash, I’d probably ditch the M Sport package’s adaptive suspension and steering, body kit, and Sensatec dashboard trim to save myself $3,550 and bring the cost to $53,745.

The Gran Coupe strikes a masterful balance between bold design and everyday confidence.

Meanwhile the M440i xDrive starts at $59,195, rising to $67,520 in the case of my San Remo Green test subject thanks to added adaptive cruise control with stop and go, parking assistance, a heated steering wheel and front seats, and a $2,400 high-performance package consisting of an oil cooler and summer tires. That latter feature is overkill and would be the first to get axed on my ideal M440i, bringing its price down to a more reasonable $65,120.

The 430i’s most direct competitor is the Audi A5 Sportback 45 TFSI Quattro, which starts at $46,645 with destination and handling and comes standard with all-wheel drive (a less powerful 40 TFSI Quattro variant is even cheaper, if you’re willing to sacrifice speed). Meanwhile, the M440i xDrive rivals the $55,945 Audi S5 Sportback. Those willing to consider dark-horse alternatives will find a helluva value in the Kia Stinger, whose four-cylinder, 300-horse GT-Line model starts at $37,135, rising to $54,530 for the 365-hp Stinger GT2 AWD.

But the reality is that not many folks are cross-shopping German luxury brands with Kias. Folks like that will face a purely emotional decision when selecting between the 4 Series and the Audi A5/S5. Both feature pleasantly constructed interiors, somewhat tight rear seats, practical cargo areas, and adequate-if-aloof performance. They also get similar fuel economy, with the BMW 430i and A5 achieving 28 miles per gallon combined while the M440i gets 25 mpg to the S5’s 24. While I personally prefer the Audi’s restrained styling, there’s no denying the Gran Coupe strikes a masterful balance between bold design and everyday confidence.

Best of all, it resolves lots of the issues folks have with the regular two-door coupe. The elongated roofline and revised details give the Gran Coupe more presence on the road, and the grille looks subtler here somehow. Even if it still looks a bit like a pig (swear jar, I know).

When does the BMW 4 Series Gran Coupe go on sale?

How much does the BMW 4 Series Gran Coupe cost?

The four-door fastback coupe will start at $46,195 for the rear-wheel-drive 430i model. The all-wheel-drive M440i xDrive starts at $59,195 and includes the M Sport package standard.

How much power does the BMW 4 Series Gran Coupe have?