Not even impossibly high expectations can deter this special, incredible roadster.

Reactions to the Porsche Boxster range from “overpriced poseur” to “Porsche’s best sports car.” I fall somewhere in the middle – my first outing in a modern Boxster was behind the wheel of a highly optioned GTS 4.0, an incredible vehicle whose only drawbacks were a staggering price, tight-fitting bucket seats, and too many gloss black accents for my liking.

Porsche has apparently been reading my dream journal, because the 2021 718 Boxster 25 Years addresses everything I didn’t like about the GTS 4.0 without touching the good stuff. Built to celebrate the eponymous anniversary, the 25 Years wears GT Silver paint (itself a historic color from the Carrera GT supercar), with a single-tone Bordeaux Red interior and matching roof. The front bumper, side air intakes, and anniversary-specific wheels get pale gold trim, recalling the original Boxster show car from 1993. Black upholstery is available, as are black or white exterior colors, but do yourself a favor and go with the retro livery.

In any colorway, the Boxster 25 Years is a very comfortable machine. We’ve come to expect peerless interior construction from modern Porsches, and this particular 718 obliges with leather trim on the dashboard, center console, windowsills, and seats, and soft-touch plastic nearly everywhere else. Genuine aluminum accents and gold-tinged 25 Years badges liven up the design a bit, with the only fly in the ointment being the Boxster’s somewhat dated PCM infotainment software that lacks Android Auto and requires a wire to connect to Apple CarPlay.

Underneath the 1993-aping styling (and 2013-aping tech), the 25 Years comes with the GTS’ 4.0-liter flat-six, making the same 394 horsepower and 309 pound-feet with the manual transmission or 317 with the dual-clutch automatic. My tester featured the former, meaning I had six delightfully slick gear choices under my right hand to go along with pedals nicely placed for heel-toe downshifts. However, the standard Sport Chrono package pre-empted me on that front, with automatic rev matching that made me look far more talented than I am. Put it all together and the 25 Years hits 60 miles per hour in 4.3 seconds, according to Porsche.

That’s certainly not slow by any stretch of the imagination, but it’s also not particularly notable at the Boxster 25 Years’ starting price of $101,450 (including the $1,350 destination charge). And yet, I’m suspicious that Porsche’s number is a bit conservative, partly because it’s a German company and partly because this 718 variant just feels so damn fast behind the wheel. The six-speed is geared tall – second gear goes to about 85 miles per hour – but it still launches with alacrity, a slight aft weight bias helping push those rear tires into the ground.

And when you dig into the throttle, you’d better be sure to activate the standard sports exhaust. Do so and be rewarded with God playing jazz on a baritone saxophone, a mellifluous bellow that’s dangerously addictive. Above all, the naturally aspirated flat-six music is the greatest reason to pick this 718 or its GTS ilk over any other member of the Boxster family. Honestly, the exhaust note is probably what makes the 25 Years feel as emotive and quick as it does – who cares how fast it is when it sounds this good? 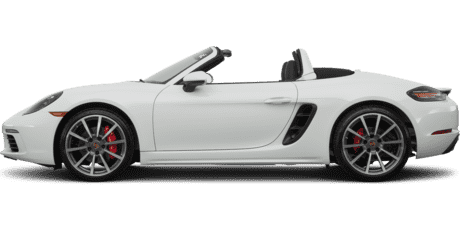 This 718 doesn’t shirk when straight roads turn twisty, either. Porsche was one of the first to really nail electric power steering, and the Boxster reminds its driver of that with every added degree of lock. Turn-in is direct, and there’s plenty of communication about the tires’ limits and the road surface, so it’s easy to become very confident behind the wheel. And as with other mid-engined sports cars, the Boxster 25 Years is beautifully balanced through corners, allowing me to tighten a corner exit by easing up on the throttle – all without fear of snap oversteer.

Stiff, well-tuned suspenders at each corner add to the appeal. Porsche Active Suspension Management is a $290 option on the 25 Years, bringing two-mode dampers and a fixed, 20-millimeter-lower ride height to the party. In their sportiest setting, the shock absorbers deliver plenty of feedback (but little harshness) to the driver, keeping the tires in lock step with the road even over varied pavement surfaces.

Porsche won’t offer its ceramic brake package on the anniversary edition, but I didn’t miss it (aside from the copious amounts of brake dust that come from the standard stoppers). A full day of flogging the Boxster 25 Years over fast, hilly terrain revealed zero signs of fade or inconsistency, finally converting me to the religion that believes that carbon-ceramic brakes are usually overkill on street cars (like the GTS I drove last year).

As brilliant as the Boxster is in the canyons, it’s no one-trick pony. Those two-mode dampers give it a surprisingly smooth, well-damped ride on the highway, and the progressive clutch and aforementioned tall gearing make it easy to trundle around in traffic. The deep front trunk is reasonably sized at 5.2 cubic feet, with the shallower rear luggage area contributing an additional 4.4 cubes. And the 25 Years even gets decent fuel economy, at 19 miles per gallon combined if you believe the EPA and 19.3 mpg if you believe the trip computer after I got through with it.

I sound a bit like a door-to-door salesman right now, all plaudits and praise, and I can tell you’re bracing yourself for the catch. Well, here it is: Every Boxster anniversary edition demands at least six figures, rising from its aforementioned base price to $105,710 in the case of my lightly optioned tester. But even if you could swing the payment, every example of the limited-to-1,250 25 Years has been spoken for. It figures, right? Porsche finally builds the perfect balance of style, daily drivability, and back-road dominance, prices itself out of reach of folks like you and me, and yet still manages to sell every unit it builds.

Looking Back On 25 Years:

Still, the Boxster 25 Years is probably my perfect vehicle. It has all the aural drama of a GTS 4.0 without demanding any comfort or design sacrifices (blacked-out accents just aren’t my thing), and by losing the optional one-piece race buckets and carbon-ceramic brakes, the anniversary special is even cheaper than the Boxster I drove last year. It just doesn’t get better than that, does it?