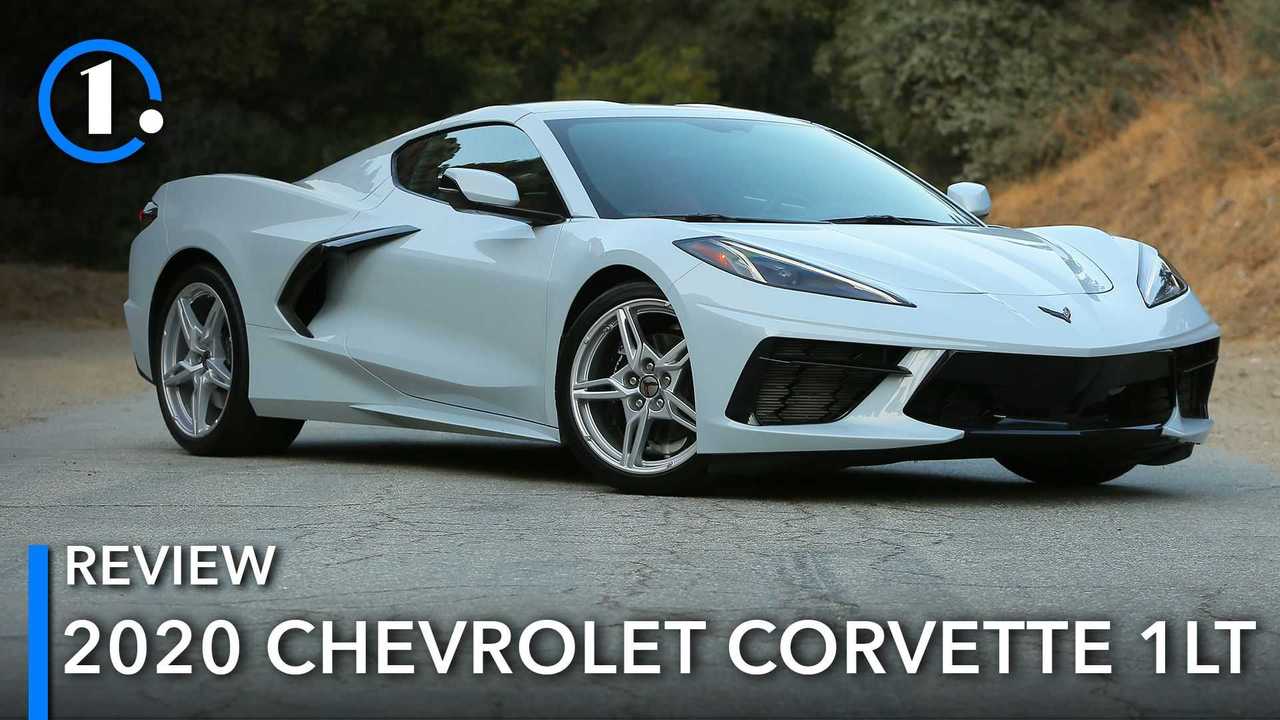 You won’t know what you’re missing. And you’ll be happier for it.

Since its inception in 1953, the Chevrolet Corvette has always been a relative bargain, offering lots of straight-line and cornering performance for less money than similarly capable sports cars. Newly mid-engined, the eighth-generation Corvette Stingray adds exotic styling to the mix. But like its European competition, your dream Chevy gets dramatically more expensive with every passing minute spent on the online configurator or options sheet.

However, there’s a case to be made for a zero-option C8, as I experienced over a weeklong test of a 2020 Chevrolet Corvette Stingray 1LT, dressed in Ceramic Matrix Gray Metallic paint with Adrenaline Red leather (a modern homage to the first Corvette’s white and red color scheme). With a starting price of $58,900 and a $1,095 destination charge, this tester cost five bucks shy of 60 grand, though it felt far richer than that. Even (or perhaps especially) in its most basic form, the C8 Corvette is a genuinely enjoyable sports car, and like its forebears, it does nearly everything well.

The Chevrolet Corvette is only the second mid-engined car from GM (following the Pontiac Fiero). Yet despite its parent company’s limited experience building such an exotic type of vehicle, the Corvette is remarkably composed and enjoyable to drive, offering instant thrills that only increase as the driver becomes more accustomed to the idiosyncrasies associated with the engine placement.

Part and parcel to that familiar (but exotic) driving experience is the ‘Vette’s engine. Just like the C7, the C8 gets a direct-injected 6.2-liter V8 with two valves per cylinder, but the 2020 model receives dry-sump lubrication, which allows it to sit lower in the chassis than before. Producing 490 horsepower and 465 pound-feet, the V8 sends power to the rear wheels via an eight-speed dual-clutch transmission, Chevy’s first such gearbox. In sum, the powertrain works very well, with the good ol’ American V8 playing nicely with the DCT even at low speeds.

Although we won't get world-beating Ferrari and Lamborghini levels of performance until the Z06 and ZR1 arrive, the base engine leaves nothing to be desired. Nearly 500 hp is plenty for a vehicle that weighs as little as the carbon-intensive Corvette (3,535 pounds), and the eight-speed ratchets off gearshifts instantaneously – though like other DCTs, it can only dispatch gears one at a time. Helping compensate for this mechanical limitation is a feature that allows the driver to hold down the left paddle, forcing the gearbox to downshift sequentially as engine speed allows – useful when approaching a corner, for example.

This is also one of few performance cars that doesn’t require an exhaust upgrade to sound good. Around town, the base exhaust fades into the background, but as speeds (and RPMs) rise, the V8 makes itself known with a husky, decidedly American burble that seems wholly at odds with the Corvette’s newly exotic form factor. That said, the $1,195 performance exhaust seems like a decent buy, though I doubt you’d be able to feel the extra 5 hp and lb-ft it adds. If I were signing checks, I’d probably skip it, if only for the meme of a sub-60k Corvette.

For all the strength training in the engine room, this particular Stingray doesn’t seem to have skipped its agility classes either. Even riding on base-spec all-season tires, the Chevy rarely wanted for grip, thanks in part to a mechanical limited-slip rear differential and massively meaty 305/30R20 rear tires (245/35R19s show up in front). In fact, the most exciting thing about piloting a mid-engined Corvette is how deftly it handles power on corner exit, eliminating the high-speed hairiness that often plagues rear-drive sports cars.

Thanks to those wide tires, the brakes are even better at stopping than the engine is at going. Brembo four-piston front calipers bite down hard on 12.6-inch rotors, while two-piston clamps and 13.3-inch rotors show up on the rear axle. The $5,000 Z51 package brings larger rotors and one-piece calipers to the party, but the base setup is good enough for even max-attack canyon driving – I suspect the Z51 stoppers would make more sense in sustained track driving, but outside of that extreme situation, the base brakes are more than capable enough.

For all the strength training in the engine room, this particular Stingray doesn’t seem to have skipped its agility classes either.

The Z51 pack also includes tighter suspenders that, again, probably feel sublime at Buttonwillow or Sebring, but the base suspension is just fine for the Angeles Forest Highway while yielding a creamy ride on the broken pavement. Body motions are absent in this base model, and although its vertical center of gravity is actually a bit higher compared to the C7 Corvette, the C8’s seats are mounted much closer to the vehicle center, making the new ‘Vette feel more responsive and exciting. What’s more, the engine’s rear-mid placement lightens up the front tires significantly, yielding light steering that’s nearly telepathic on a twisty road.

Unfortunately, that rear-biased weight distribution (the Corvette carries 60.6 percent of its mass over the back) means that the front wheels start to slide out when getting on the gas too early in a corner. It’s easy to quash this behavior by easing up on the throttle, but it’s a disappointing regression from the nearly perfectly balanced C7, especially since the abundant rear grip seems tailor-made for quick corner exits. Understeer in a modern Corvette – who’d have guessed? But driven with some care, the C8 is capable of a supremely quick pace, putting the driver deep into extralegal speeds with little provocation.

Gone are the days when buying a Corvette meant sacrificing comfort and convenience in exchange for a low price and hot performance. The standard coupe comes with an 8.0-inch touchscreen infotainment display running on GM’s newest software that makes it very easy to navigate. Meanwhile, a 12.3-inch digital instrument cluster serves up crisp, attractive graphics and a variety of layouts, and swapping between displays is easy, even on the fly.

The base, “Mulan” leather seats are also among the best buckets ever offered in a GM product, with plenty of support even though they’re only adjustable eight ways. The interior is yet another case of blissful ignorance – if you haven’t seen the 3LT’s leather-wrapped dashboard and available two-tone upholstery options, you won’t miss it. That said, we do wish the base seats offered at least some lumbar adjustment. They’re nearly perfect for me as-is, but not every driver will like them as much as I do.

That same caveat applies to the tall center console and squared-off steering wheel. Although the C8 Stingray is far more livable than many other mid-engined cars, climbing aboard and finding a comfortable seating position is more difficult than it was in the C7. For my part, I fit in the Chevy just fine, and the fighter-jet steering wheel and long strip of secondary controls separating the driver and passenger felt very exciting and cockpit-like. The ergonomics take some getting used to – finding the hazard lights took about 45 seconds, for example – but once I figured out where everything was, I bought into the gee-whiz design.

It’s not all ray guns and roses, however. Removing the roof panel yielded headache-inducing buffeting at freeway speeds, with the windows up or down. And while the mid-engine layout affords the driver a panoramic view of the road ahead, the Stingray now has massive side and rear blind spots. While most Corvettes before it have offered quarter windows or a wraparound glass hatch, checking the adjacent lane on a C8 is all but impossible, and the smallish side view mirrors help only a little. Every traffic maneuver was an exercise in prayer, making the C8 a much more stressful daily driver than its predecessors.

The Stingray now has massive side and rear blind spots.

Also notably lacking, at the base or any other price, is active safety technology like forward collision warning and automatic emergency braking. Chevrolet is already known to be rather slow at adopting modern safety technology – active safety features are frequently only available on top-spec models, but their omission on even the top-rung Corvette is all but inexcusable. Blind spot monitoring is available, but only on the 2LT trims and above.

2020 Chevrolet Corvette Stingray Review: A Lot Of Perfect, A Lot Of Poor
⠀

Even without those modern features, the 2020 Chevrolet Corvette 1LT feels far more exotic than its price would ever suggest – and that’s before even considering the cachet of mid-engine ownership. Every fuel stop and traffic light was an opportunity for an admiring onlooker to ask about the car, and more than a few were surprised to learn it was a Chevrolet, not something far more exotic. If value were only measured by what your neighbors think you spent, the Corvette Stingray is the deal of the century.

But even on less frivolous terms, this $59,995 Corvette is a massive bargain. Chevrolet quotes a 3.0-second time to 60 miles per hour, eclipsing the Porsche 718 Cayman (and even the far more expensive 911 Carrera). It also features competitive – if not class-leading – comfort and interior quality, and it’s styled as exuberantly as one would want of a weekend plaything. Admittedly, it’s not quite as competent a daily driver as its predecessors were, but a week in the 2020 Chevrolet Corvette Stingray 1LT has us convinced that most new owners are spending way more than they need to – the base model is still near the top of its class.