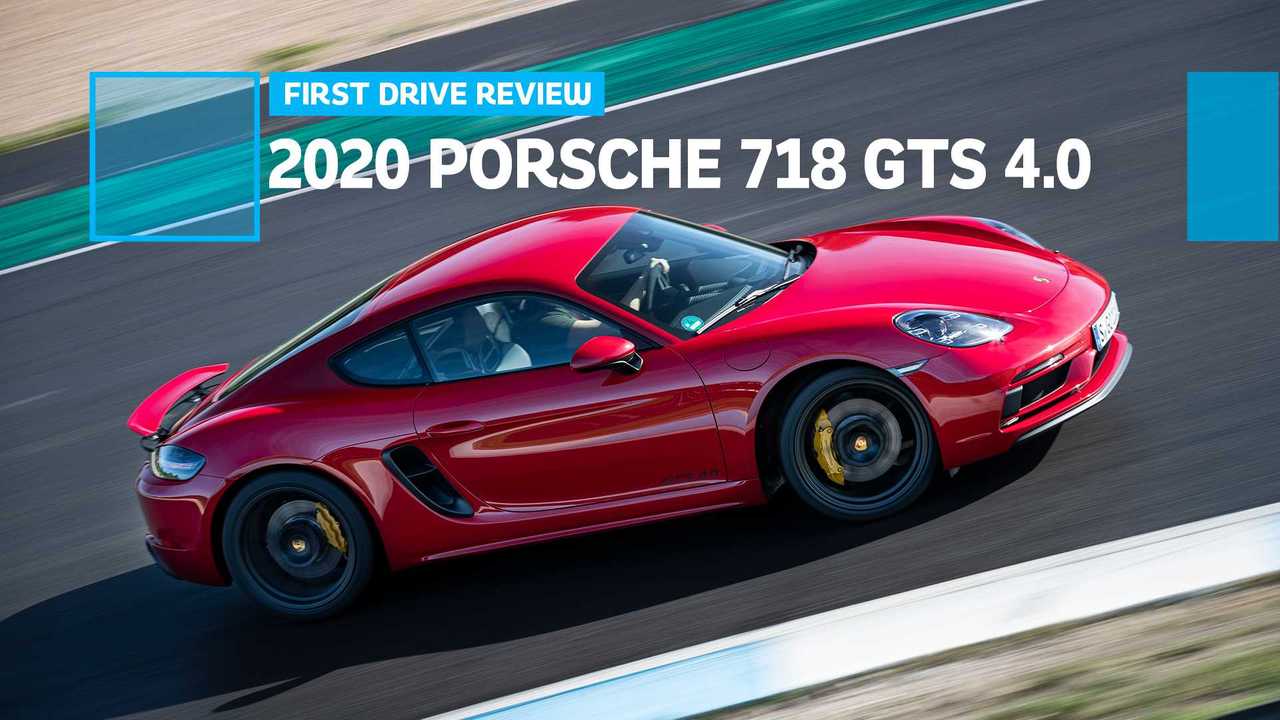 In an era where sports cars are increasingly under threat from stricter emissions and fuel economy regulations, launching a sports car with a large, naturally-aspirated engine and a manual transmission is an occasion worth celebrating. And if instead of two sports cars instead of one, as is the case with the 2020 Porsche 718 Cayman and Boxster GTS 4.0, is worth double the celebration.

Porsche’s GTS line, born in 1963 with the spectacular 904 Carrera GTS, splits the difference between the base models and with the higher-performance variants. In the case of Porsche’s smallest mid-engine sports cars, the new GTS sits between the Cayman S/Boxster S and the hardcore Cayman GT4 and Boxster Spyder… just like the last 718 GTS did. This model improves on its predecessor, though, by adopting the GT4/Spyder’s 4.0-liter flat-six.

Gone is the turbocharged 2.5-liter flat-four, with the new 4.0-liter mill marking a return to natural aspiration, which we haven’t seen in a Boxster or Cayman in this generation. And what an engine it is.

The new 4.0-liter flat-four sits amidships and packs 394 horsepower, a 44-hp increase over the Boxster S/Cayman S and 29 hp more than the last GTS. Sacrificing the turbocharger means losing some torque, though. The GTS 4.0 offers 309 pound-feet of torque, matching the turbocharged S models but losing eight lb-ft to the last GTS. A bummer, sure, but the 7,800-rpm redline (300 revs more than the flat-four) makes up for the minor drop in torque.

Perhaps most interesting of all is that Porsche will only offer a six-speed manual in the new GTS at first – US consumers can order the company’s famed dual-clutch auto later this year. The six-speed sends the engine’s power rearward to a mechanical limited-slip differential, for a little extra oomph coming out of corners.

While fuel economy isn’t much of a concern with sports cars, the GTS 4.0 will net a respectable 10.8 liters per 100 kilometers (roughly converted, about 22 US miles per gallon) thanks in part to a cylinder-deactivation system that allows the GTS to shut down half of its six cylinders when the driver calls for less than 74 lb-ft of torque.

The exhaust system, according to Porsche, comes straight from the Cayman GT4 and Boxster Spyder. It’s also one of the features that differentiates these new models externally from their predecessors, since the design of the rear fascia features two separate exhaust tips instead of a twin-pipe, center-exit setup.

From the first turn of the steering wheel, the superb feedback of both GTS 4.0s is striking. The steering is as direct as it is precise, heavy in the right way but constantly communicating with its driver. Porsche placed the three pedals perfectly, tuning each so that the clutch is easy to modulate, the brake pedal predictable and well weighted, and the accelerator sharp and energetic. Changing gears with the short lever is both a delightfully mechanical and an impressively precise process. This is one of the best manual transmissions we’ve ever tested.

Our Boxster GTS 4.0 tester featured an Alcantara wrap on the Sport GT steering wheel that made the drive even more pleasant. This car is agile and tremendously lively, exhibiting impressive poise in corners. The Boxster also allows more of the 4.0-liter’s sound to reach the driver’s ears. If quietness is a priority, the fixed roof Cayman is, obviously, the smarter option than the fabric-topped Boxster, which allows the mid-mounted engine to flood the cabin.

The 718 feels firm on the road, though, with every bump making its presence felt on the steering. It’s not an uncomfortably stiff car, though. And because it changes direction so eagerly, the 718 feels fun even when driven casually. It’s a vehicle that drivers can enjoy at any pace.

The naturally aspirated flat-six is punchy at even low engine speeds, but it really comes alive above 5,000 rpms. This is also where the sound changes, becoming the typical howl so common in Zuffenhausen’s six-cylinder boxers. Power delivery is extremely progressive and predictable and combined with the communicative chassis and steering, the 718 is an easy car to judge while accelerating hard out of corners.

The 718 feels fun even when driven casually.

Both the Boxster and Cayman GTS 4.0 feature Porsche Active Suspension Management, an adaptive setup that drops the car three-quarters of an inch compared to the S models. GTS 4.0 owners can also opt for an additional 0.4 inch drop. While PASM is standard, the Porsche Carbon-Ceramic Brakes and their bright yellow calipers are an option (and one we recommend if track-ready braking performance is a high priority).

The standard brakes are ample, though. They feature 13.8-inch front rotors and 13.0-inch rears with six-piston calipers in front and four-piston units in back. The PCCB setup features 13.8 inches at both ends of the cars, making them the better option for bringing the staggered tires (235/35/20s in front and 265/35/20s in back) to a stop. Unsurprisingly, the carbon-ceramic brakes exhibited zero fade during our testing.

We put the track-ready performance of the hardtop Cayman GTS 4.0 to the test at Portugal’s famed Circuito do Estoril, where we chased a 911 Carrera S around the 2.6-mile, 13-turn track. The atmospheric redline of the 4.0-liter flat-six feels at home on Estoril – the engine pulls hard, even at high engine speeds. This car feels tremendously quick, even on a wide, F1-caliber race track, a place where road cars normally feel too slow to take advantage of all the space.

The manual gearbox, which worked spectacularly on the road, is even better on the track. Switch the drive mode to Sport and Sport Plus and the 718 GTS 4.0’s rev-matching feature comes into play, making us even more confident while approaching turns. The transmission’s short throws are perfect for quick shifts

As long as we choose the right gear, the Cayman feels almost equal to the 911 pace car in terms of lap times. The turbocharged Carrera S is quicker in a straight line (60 arrives in 3.5 seconds, compared to 4.3 in the GTS 4.0), exhibiting more immediacy when exiting corners – the 718 is lighter and more agile, though, and gains ground on entry.

The on-track stability of the new GTS is equally impressive. The rear only moves when its driver provokes it or is too impatient to get back on the power. The front end, though, is surgically precise and obedient, exhibiting understeer only when the driver pushes way too hard. The GTS 4.0 features Porsche Torque Vectoring, although the system does its job invisibly on the track.

Real toys for purists, like the 718 GTS 4.0, are in danger of extinction. Increased safety gear increases weight, emissions regulations are forcing naturally aspirated engines to adopt turbochargers or even batteries, fundamentally changing their character, and an entire generation of motorists are missing out on the joys of manual transmissions. The 718 is a reminder of what we stand to lose. But it’s also a car worth celebrating. Somehow, we doubt this car’s future owners will have any problem doing that.