GMC offers a pricey off-road option to compete with the established crop.

There are a lot of capable, affordable off-roaders on sale today. Some of the best options come from brands you know and love like Ford, Jeep, and Toyota. But if you want something a bit different, from a company that’s less established in the space, the GMC Yukon AT4 is an interesting alternative – as long as you're willing to pay a hefty premium.

With genuinely capable hardware like a standard four-wheel-drive system and a limited-slip differential, plus more competitive off-road angles than the standard model, the Yukon AT4 will tackle the tough stuff with relative ease. But like all modern Yukons, this version is also comfortable, nice to drive, and loaded with some impressive tech. If you can swallow the $74,960 asking price as-tested, the Yukon AT4 makes for a weirdly compelling off-road vehicle.

“Big” and “bold” are the first two words that come to mind when looking at the GMC Yukon AT4. As if the standard Yukon weren't in-your-face enough, the AT4 package pumps up the exterior styling with a trim-specific grille that swaps chrome mesh for vertical slats, fog lights with unique black surrounds, and a brush guard on the bumper that helps protect the underbody when off-roading. The AT4 even has red tow hooks that are both functional and fun to look at.

The wheels are unique to the AT4, as well. These 20-inch aluminum rims have a six-spoke split design with black inserts and carbon grey accents, and those wheels are actually two inches smaller than what GMC offers on the Denali (again, for off-roading). But not much changes on the rear of the AT4 compared to the standard Yukon – the only thing this trim does differently is that it swaps the bright chrome accent above the license plate frame for a darkened finish.

The Yukon line and the Chevrolet Tahoe have nearly identical interiors since they're essentially the same vehicles underneath. The only outlier is the Yukon Denali, which has a distinctive dash layout with a crisper 10.2-inch touchscreen embedded within the dash. In the AT4 and all others, the 10.2-inch touchscreen sits atop the dash. Perforated leather covers the seats and steering wheel, but the AT4 only offers Jet Black with very subtle brown accents. It looks nice, but it's a bit monotone – and the swaths of leather and cloth might be hard to clean after serious off-roading. 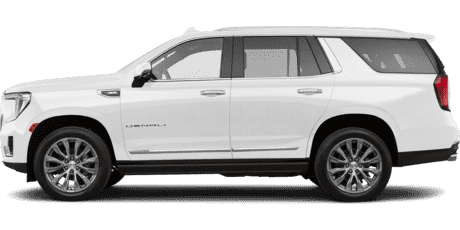 For as huge and hulking as the Yukon AT4 is, it actually has a nice ride. The adaptive air suspension and Magnetic Ride Control, which we’ve praised previously, keep the 5,677-pound SUV well in check. The Yukon AT4 is smooth, composed, and quiet on the highway, and even though it does exhibit expected body roll around corners, it’s nowhere near as unwieldy as its size suggests.

Once you hop into the cabin, which is a bit trickier due to the taller ride height (10 inches versus 8.0 inches), the front seats are not the best we’ve placed our butts in. The leather is stiff, bolstering is virtually nonexistent, and it feels like you’re sitting on top of them rather than in them. The second-row captain’s chairs suffer the same fate – they’re very stiff and very flat. But as with the front, the second row is at least heated (a $370 option).

The Yukon AT4 comes standard with a 10.2-inch touchscreen and a corresponding 8.0-inch information screen embedded within the analog gauge clusters. The central touchscreen runs GM’s over-the-counter user interface, which you’ll find on everything from the Silverado pickup to SUVs like the Blazer, and even in most Cadillac products. Although that UI is a bit overused, it’s at least concise and clean, with color-coordinated icons that are easy to parse when driving.

Apple CarPlay and Android Auto both come standard on the Yukon, but you will have to pay extra for wireless connectivity, which is available as part of the $9,145 Premium Plus package on our tester. Wireless Android Auto worked very well in our two-week test. Apart from one or two connectivity issues, the Android Auto icon always illuminated on startup.

There are some things on the GMC Yukon AT4, though, you won’t find elsewhere in the range. The head-up display is a hearty 15.0 inches and projects things like local speed limits, driving speed, audio, navigation directions, and more. The Yukon also has nine different camera views, including a high-definition 360-degree cam and a rearview mirror backup camera. Each of those features is part of that expensive Premium Plus package.

The lone engine option on the Yukon AT4 is a 5.3-liter V8. This unit produces 355 horsepower and 383 pound-feet and comes paired to a 10-speed automatic transmission and – on the AT4 model – standard four-wheel drive. We’d be lying if we said we didn’t prefer the more powerful 6.2-liter V8 or diesel options available on other Yukons. The 5.3 is fine, but 420 hp from the larger V8 or 460 lb-ft from the straight-six diesel is more appropriate for this 5,600-pound SUV, even if only available as an option.

Otherwise, the Yukon AT4 is delightful to drive. The combo of Magnetic Ride Ride control and the air ride adaptive suspension make the AT4 feel manageable in turns – not unwieldy like some other three-row, body-on-frame SUVs. The steering is good too, with solid feedback and a weighty feel. There is body roll, but again, not nearly as much as you might expect.

Admittedly, Florida doesn’t offer much in the way of off-road trails, but the Yukon AT4 proved capable on the few dirt roads we did traverse. Its revised front bumper gives it an approach angle of 32 degrees – nearly as much as a base Toyota 4Runner (33 degrees) – and additions like all-terrain tires (P275/55R20), a four-wheel-drive system, and a limited-slip differential makes it all the more capable on dirt.

The Yukon AT4 comes standard with GMC’s Pro Safety Plus package, which includes lane-keep assist with lane-departure warning, lane-change alert, rear cross-traffic alert, automatic emergency braking, and a bit more. On top of that, the Premium Plus package adds a 360-degree HD camera and rear pedestrian alert – two exceptionally helpful features when trying to shove the AT4 into a tight parking spot.

As with any full-size body-on-frame SUV, the Yukon AT4’s fuel economy isn’t great. The GMC achieves just 16 miles per gallon city, 20 highway, and 18 combined with standard four-wheel drive and a 10-speed automatic. The Tahoe with the same engine and all-wheel drive achieves identical figures, while the Ford Expedition also gets 18 combined with 4WD. At least the GMC isn’t the worst of the bunch; that honor goes to the Nissan Armada, which achieves just 15 mpg combined.

The base GMC Yukon starts at $52,595 (including a $1,695 destination charge), but the rugged AT4 asks at least $66,620. Few companies offer a direct competitor to the popular Yukon AT4 (an off-road, body-on-frame, three-row SUV) but there are a few indirect alternatives to consider. The Ford Expedition with the FX4 off-road package costs $58,950 by comparison, while the Nissan Armada only asks $51,900 with four-wheel drive. Although the Toyota Land Cruiser is technically dead in the US, that off-roader did ask $85,000 to start (and came with a lot more capability to boot).

Our tester costs $76,485 after options, which is steep for a vehicle that lacks basic equipment like adaptive cruise control. The options list includes the $9,145 Premium Plus package, which consists of a number of features previously mentioned, as well as a $350 power-sliding center console and $370 power-release captain's chairs in the second row. You could ditch some of those options, like those last two items, but the Premium Plus package is a necessity that will still net you a $70,000-plus asking price.