The 2021 Nissan Armada soldiers on into the new year with only minor aesthetic changes atop its same old-school body-on-frame design and naturally aspirated V8. In some ways, we appreciate the Armada and others like it for sticking to its roots. But in a market now booming with better options, it's hard to recommend this large SUV to anyone outside of the hardest of hardcore Nissan faithful wanting something that can tow a boat or handle an off-road trail.

The Armada is thirsty, not nice to drive, and for as large as it is, it still falls well short in passenger space compared to some roomier, more modern competitors. Plus the Armada is one of the most expensive options in the class with a starting price of $52,900 (for now) and an as-tested price of over $70,000.

The previous Nissan Armada had too much going on up front – downturned headlights, a chrome-heavy grille, fog lights, and a huge lower vent opening all shoved onto a front fascia that didn't have enough space. On this 2021 model, though, Nissan raised the hoodline and made room for sleeker U-shaped headlights and a cleaner V-motion grille, with fewer fussy details elsewhere. The end result is an SUV that looks more modern, even if it still isn't our definition of attractive.

This particular Platinum model wears a shade of Hermosa Blue Pearl paint that we quite like, combined with 22-inch darkened chrome wheels that come standard on this trim – inarguably the best wheels of the bunch. And if you want to toughen up the Armada's exterior even further, Nissan offers a Midnight Edition model, which swaps the chrome finish on the front grille, side mirrors, and more, for a gloss black instead. But we actually prefer the clean styling of the Platinum.

A deep shade of Espresso Brown leather covers the seats – quilted on the top-trim Platinum model – while the dash wears a combo of black leather and a strange marbled lacquered wood trim that looks outdated. Apart from that, the addition of a new 12.3-inch touchscreen atop the dash and a new 7.0-inch information screen within the instrument cluster makes the old cabin feel a bit more modern. 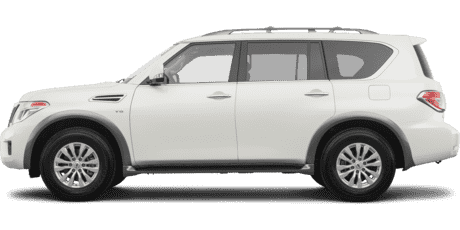 The Nissan Armada is like a bank vault on wheels, and not just because it looks like a bank vault on wheels. Impressive sound deadening makes it feel like you're sealed off from the outside world. On top of that, the hulking 5.6-liter V8 doesn't rumble or shake on startup, the suspension is buttery smooth and makes for an absolutely sublime ride, and the quilted Zero Gravity front seats feel like they might have come from La-Z-Boy.

Passenger space, as you might have guessed, is solid considering the Armada's daunting size. The Nissan has 39.8 inches of front headroom and 41.9 inches of front legroom, although those aren't best-in-class figures – the Chevrolet Tahoe (42.3 / 44.5) and Ford Expedition (42.0 / 43.9) both do better in these respects. The second-row captain's chairs (an extra $650) are cushy, comfortable, and well worth the additional price. Plus both the first and second row get standard heating on this Platinum model.

But for as large as the Armada is, the third row falls short of being comfortable. The 36.4 inches of headroom and 28.4 inches of legroom are among the worst figures in the class, and you feel it sitting back there. On top of that, the cramped third row only gives way to 16.5 cubic feet of room behind the seats. At least you can fold the third row flat for a healthier 49.9 cubes.

The biggest improvements to the 2021 Armada are inside. Gone is the tiny and outdated 8.0-inch touchscreen from last year, and in its place is a shiny new 12.3-inch screen with a fresh user interface and split-screen functionality. Also standard is wireless Apple CarPlay and Android Auto connectivity, as well as baked-in Wi-Fi.

This setup is much easier to use than on the previous Armada. The touch response is quick, scrolling functionality is smooth, and the layout is clean and easy to use. One issue we do have, is that due to the standard split-screen setup, Android Auto and Apple CarPlay projections only take up a small part of the lefthand screen. The projection (by our measure of holding a smartphone to it) only uses about seven inches or so of the 12.3 available.

Just below that central touchscreen is a totally redesigned center stack with a cleaner array of buttons, HVAC knobs, and various dials, which are all very easy to use. Lower down on the stack, near the gear lever, are additional features like a wireless charging pad, USB-A and USB-C ports, and a trailer brake controller.

We expected the 2021 Nissan Armada to drive like the large and lumbering, body-on-frame SUV that it is, but even we were surprised at how uncouth it felt. This vehicle weighs nearly 6,000 pounds – more than the Tahoe and Expedition, and just as much as the Toyota Sequoia – and it's extremely top-heavy.

Even in the slightest corner, the Armada exhibited nasty body roll and overwhelmed the tires on exit, wafting from side-to-side like a ship on the ocean. Not even the four-corner independent suspension controlled body movements well. And the steering didn't help; it's sloppy and vague.

Beyond that, the 5.6-liter V8 produces 400 horsepower and 413 pound-feet, paired to a seamless seven-speed automatic transmission. The V8 rarely lacks power, easily moving the massive SUV without making much sound or shuddering in the process. We won't go so far as to call the Armada quick, but it definitely doesn't feel slow.

The 2021 Armada comes standard with a suite of active safety features like adaptive cruise control, automatic emergency braking with pedestrian detection, blind-spot monitoring, lane departure detection, and a bit more. Most of those are brand-new for 2021.

The so-called “Intelligent Cruise Control” worked well enough in our test, maintaining a safe distance to the vehicle in front of it without braking or accelerating too harshly. Unfortunately, this system won’t brake all the way down to zero, nor does it offer lane-keep assist technology. Nissan didn’t fit the new Armada with the more advanced ProPilot setup because the platform is too old, but that certainly would have helped.

The Nissan Armada is thirsty. The four-wheel-drive model only achieves 13 miles per gallon city, 18 highway, and 15 combined. Compared to the Armada’s nearest alternatives, that’s only slightly better than the Toyota Sequoia (14 combined), and down compared to the Chevy Tahoe (16 combined), GMC Yukon (16 combined), and Ford Expedition (19 combined). If you want slightly better fuel economy, you’ll have to make do with a two-wheel drive Armada, which gets 16 mpg combined.

Nissan promises to eventually add a base S trim to the 2021 Armada (like every other model it offers), but until then, this vehicle remains the most expensive option in the class. The current entry-level trim, the Armada SV with two-wheel drive, costs $52,900. Four-wheel drive is an extra $3,000 on top of that. When the S arrives, it will start at $48,500.

The range-topping Platinum tested here starts at $65,300 with 2WD, and our car asks $68,300 out of the box with 4WD. There aren’t a ton of options to be had; the Hermosa Blue paint and Espresso interior are both no-cost extras, and the second-row captain’s chairs are $650. The total cost of our tester is $70,465 with destination, which is pricey given the Armada’s outdated driving dynamics. Something like a fully loaded Tahoe or Expedition both offer more at around the same price.