General Motors is at the start of an ambitious journey that will see the former World's Largest Automaker initiate its long-overdue journey toward electrification. There are new Ultium battery packs, promises of electric Cadillac luxury crossovers, and the brutish GMC Hummer EV, along with more pedestrian metal aimed at families. That's far from obvious in the here and now, of course, where the General is preparing a slate of truck-based, diesel-powered, three-row SUVs.

The 2021 Chevrolet Tahoe and Suburban are the first of these vehicles to adopt a 3.0-liter turbodiesel six-cylinder, an engine introduced in the Duramax-badged Silverado and GMC Sierra pickup trucks. And like the diesel-powered Silverado we tested earlier this year, the addition of the torque-rich straight-six makes for a more pleasant everyday driver. Introducing the Duramax to the Tahoe and Suburban line, though, not only grants these large SUVs segment-leading fuel economy, but it creates a version with no natural competitors. Taken as a whole, this diesel-powered SUV is hard to ignore.

If you read our review of the diesel-powered Silverado, the output figures for our Tahoe RST tester will look familiar: 277 horsepower and 460 pound-feet of torque, which provides even a weighty boi like our four-wheel-drive tester (official figures aren't available, but we're guessing around 5,700 pounds) with plenty of pace off the line. The torque arrives in a fat dollop, all up front – peak twist sits at 1,500 rpm – and thankfully, the Tahoe makes it easy to manage via a smooth, progressive throttle.

The pedal tuning allows minute adjustments that pair neatly with the always-there torque, giving the Tahoe driver confidence in the kind of tight situations this huge vehicle seems to always find itself in. Dialing in additional power is simple, while the 10-speed automatic manages the oomph admirably. Go wide open and the pairing of engine and gearbox mean nearly seamless acceleration that makes the Tahoe feel more like a freight train than a typical large SUV. While the diesel engine doesn't improve the Tahoe's maximum tow rating – 8,200 pounds in two-wheel-drive form (Chevy hasn't released figures for the four-wheel-drive diesel) – the abundant torque should at least make the job easier on the driver. 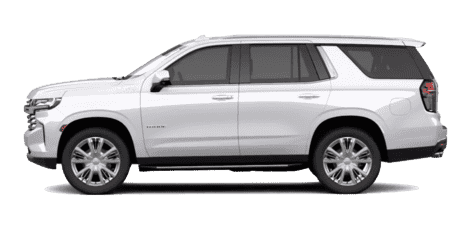 In around-town driving or at highway speeds, the diesel engine makes a strong argument with its refinement, too. This is a quieter engine at speed than either Chevy's 5.3- or 6.2-liter gas engines, while gentle acceleration is nearly as pleasant as cruising. Only under heavy acceleration and at high engine speeds does the straight-six lose the plot, which we'd say is true of other diesel engines. And yes, there is some diesel clattering on cold starts, but the 3.0-liter settles down quickly.

While daily drivability is a strong justification for the straight-six diesel over the base 5.3-liter V8, the best excuse is fuel economy, especially if the majority of your mileage comes at freeway speeds. The EPA rates our four-wheel-drive Tahoe tester at 20 miles per gallon city, 26 highway, and 22 combined compared to 16 city, 20 highway, and 18 combined for the 5.3-liter V8. The 6.2-liter is the thirstiest member of the family at 14 city, 19 highway, and 16 combined.

In our first drives of the Tahoe's longer sibling, the Suburban, as well as our tests of the new GMC Yukon and Cadillac Escalade, we raved about the fantastic air suspension and magnetic dampers. The pairing instilled a level of calm over small and medium bumps that no body-on-frame model can match at the moment. With that in mind, we specifically asked Chevrolet to send us a Tahoe that normal folks might buy, rather than another air-sprung, $85,000 High Country.

The RST is that model, and by and large, it remains a likable package. While it's easy to get wrapped up in the styling – black badging, darkened grilles, in-your-face 22-inch wheels, and red contrast stitching in the cabin – the most substantial change is what's missing from the High Country we drove in August. The fully independent front and rear suspension loses the air springs and magnetic dampers. Instead, we have simple coil-over shocks front and rear – it's also worth mentioning the RST is the only variant short of the range-topping High Country to offer standard 22-inch wheels.

The subtraction of the air suspension and trick dampers is a detriment, but it’s a less substantial loss than you might think. The Tahoe's reactions to rough roads are more noticeable, but Chevrolet still deserves credit here. Like the Suburban High Country, body-on-frame badness – the secondary shuddering of the body after the suspension fails to hide a bit of crumbling pavement – only really creeps through on severe bumps.

Over more mundane roads, the standard setup struggles to isolate the cabin as thoroughly as the air springs/magnetic dampers, but rarely reminds the driver or passengers of the body-on-frame roots (and remember, that's with 22-inch wheels). That said, the gap between the Tahoe and the Ford Expedition is far narrower without the fancy tech, and we'd have a hard time ordering the Chevy in this spec.

Of course, price is a real consideration and with our $60,100 tester adding just over $9,000 in options (including the $995 engine upgrade) and a $1,295 destination charge, this is still a $70,000 SUV. But price between it and one with the revelatory air springs is expansive. The fancy springs are only available on the $73,895 High Country and they carry their own $1,465 premium. The Duramax diesel, meanwhile, requires an extra $1,500 (it's just $995 for the RST). We may be talking about pricey vehicles here, but there's nearly $7,000 separating these two, and the improvement in ride quality probably isn't worth that increase.

Ultimately, the 3.0-liter diesel makes as compelling a case in the Tahoe as it did earlier in the year with the Silverado. Inarguably, this engine is an improvement on the base 5.3-liter, and it's possibly even more pleasant to live with than the 6.2-liter. But unlike the Silverado, where the larger gas engine is available on more than half the trims, the 6.2-liter is only available on the top-spec Tahoe/Suburban. That makes the 3.0-liter Duramax an easy choice for consumers that want additional refinement and daily-driver performance without climbing too far past $70,000.

Notably, the Chevrolet Tahoe is on our list of the SUVs with the Best Towing Capacity.