The compact crossover finally has its day in the sun.

I love a surprise in almost any form, be it a birthday party, an onion ring in a basket of fries, or a jump scare in a horror movie. That’s why I had such a wonderful time in the 2022 Hyundai Tucson, a competitor to the Nissan Rogue, Honda CR-V, Toyota RAV4, and myriad other small crossovers. No longer content to merely be competent and average, Hyundai gave the Tucson a shocking exterior design, matched to a roomy interior and plenty of tech.

The edgy 2022 Tucson is not only a major improvement over its predecessor, it also might be one of the best compact family SUVs on the market. I kept thinking back to my week with the Nissan Rogue (also a stellar cute-ute) and finding myself impressed at how well the Hyundai handled the same tasks as its rival from Hiroshima. And although I was only able to spend a few days in one, the Tucson stood out with many welcome (and one or two unpleasant) surprises.

The compliment “sharp dresser” is usually figurative, but in the case of the edgy Tucson, it’s literal. Taking a few cues from the Elantra sedan, the Tucson gets several interconnected surfacing lines that create positive and negative space on the body sides. For example, the parallelogram-shaped inset on the door skins is sunken in a bit from the bulging, geometric wheel arches. An arch-shaped front fender and triangular chamfering on the rear quarter panel collect light for the upper body and create shadow for the door and rocker panels.

Triangles are rare design features on a car, but Hyundai is leaning into that novelty with a distinctively patterned grille, whose outermost elements hide daytime running lights behind a translucent chrome finish. Like the smaller Venue crossover, the Tucson puts its headlight array in a little nacelle on the front bumper, precluding the need for separate fog lamps. The taillights reside within a set of four fang shapes on the rear, connected by a full-width light bar. Get close and you’ll see that the lights, when illuminated, take on an almost glittery, galaxy-like appearance.

The compliment “sharp dresser” is usually figurative, but in the case of the edgy Tucson, it’s literal.

Details like these keep the eyes engaged if they ever get tired of taking in the Tucson’s overall styling, which we doubt will happen quickly. But “interesting” is often a backhanded compliment when used in the place of “beautiful.” Personally, I think the Tucson makes excellent use of its weird angles and edges to look distinctive, and in spite of all of those intersecting lines, it’s a cohesive and attractive shape overall. Not everyone on staff agrees, but I’m still glad to see Hyundai taking design risks, even with its commodity cars.

The Tucson’s lovely interior design is sure to be less divisive. Sweeping metallic arcs frame the center stack and separate the dash top and windowsills from the rest of the cabin – a bit like the twin-cowl design used on Mustangs and Thunderbirds of the mid-1960s, but modernized via Hyundai’s unusual four-spoke steering wheel.Materials are class-competitive, with the front dash top and upper door panels well padded, while the lower doors and center console are rigid. Like the Nissan Rogue, the rear seats swap in hard door panels, with soft-touch appearing on armrests and elbow pads only. 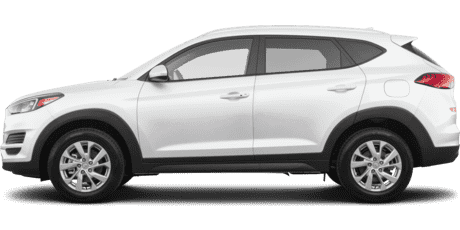 The all-day-comfy front seats get 41.4 inches of legroom and 38.1 inches of headroom, beating out the CR-V by 0.1-inch and the RAV4 by 0.4-inch in both respects. The Rogue, meanwhile, gets 0.1-inch more legroom and 1.3 inches more headroom. The Tucson starts to strut its stuff in the second row, with a massive 41.3 inches of legroom and 39.0 inches of headroom. Of those competitors, only the Honda and Toyota are marginally larger in headroom. The Tucson’s supportive, reclining rear seat – heated, in Limited form – makes the most of this stretch-out space, and the Tucson is genuinely comfortable for four adults.

Cargo space is also impressive, with 38.7 cubic feet available when the 60/40 rear seats are up or 74.8 with them folded flat. Only the Honda’s seats-down number is better, at 75.8 cubes; otherwise the Hyundai Tucson is comfortably at the front of the pack among its core competitors. The cargo area also features an accessory power point and convenient seat-fold releases in the side walls.

The Tucson starts to strut its stuff in the second row, with a massive 41.3 inches of legroom and 39.0 inches of headroom.

My tester’s 10.3-inch infotainment screen and touch-sensitive climate controls reside in a glossy panel for a clean and modern design, but I’d still rather have physical controls for volume, station tuning, and climate controls. Those functions are currently too distracting to use when driving down the road, with lettering and icons that are too small to scrutinize at a quick glance. At least the Tucson’s infotainment system is reasonably easy to use – a home button would be welcome, although there’s a multifunction star icon that can be programmed as such. A 10.3-inch digital instrument cluster offers further adjustability and customization.

Unless you opt for a hybrid or plug-in hybrid Tucson, your right foot commands a naturally aspirated 2.5-liter inline-four mated to an eight-speed automatic transmission. The example I drove has all-wheel drive with a manually locking center differential for slippery surfaces, but even left to its own devices, it’ll shuffle power front and rear as appropriate.

A drive selector has four settings – Normal, Sport, Smart, and Snow – but unless you possess more patience than I have, you’ll want to leave it in Sport as much as possible. The normal setting blunts throttle response far too much, making the Tucson feel substantially slower than surrounding traffic.

In terms of handling and braking, the Tucson falls into roughly the same tier as the Nissan, Toyota, and Honda.

The sporty driving mode feels much livelier, though with only 187 horsepower and 178 pound-feet motivating 3,651 pounds of crossover, the Tucson is still only adequate when it comes to driving excitement (for now). It feels about as spry as the 181-hp Rogue or 190-hp CR-V, but the 203-hp Toyota RAV4 is better, while the Mazda CX-5 and its optional, 250-hp turbocharged engine is the hot rod of the group. In terms of handling and braking, the Tucson falls into roughly the same tier as the Nissan, Toyota, and Honda – it’s secure and stable, but not much fun.

Making the Hyundai a more attractive commuter is a long list of standard active safety features. Forward collision avoidance with pedestrian detection, lane-keeping assistance, and driver attention monitoring come on every Tucson, while the Limited I drove adds adaptive cruise control, Highway Driving Assist, and blind spot camera monitors. The competition features much of the same standard equipment, but only Nissan’s ProPilot suite feels as well integrated as the Tucson’s driver-assist technology, which keeps the vehicle well-centered in the lane and distanced from leading vehicles, even on curves and in heavy traffic.

Unfortunately, Hyundai gets left behind when it comes to fuel economy, achieving 24 miles per gallon in the city, 29 highway, and 26 combined – I saw a computer-indicated 23 miles per gallon after some hard driving. The Honda CR-V is this segment’s most parsimonious, with 29 mpg combined, and both the Toyota RAV4 and Nissan Rogue manage a respectable 28 mpg. The 2022 Tucson is an improvement over its immediate predecessor, but I still expected a combined number closer to 30 and a highway number of at least 31 or so. Those seeking frugality might like the Tucson Hybrid’s 36 mpg combined (though the 39-mpg RAV4 Hybrid does better still).

The base 2022 Hyundai Tucson SE starts at $24,950, offering an 8.0-inch touchscreen, the aforementioned standard safety features, and LED lighting front and rear. The mid-level SEL adds heated seats, a proximity key, blind spot warning, and adaptive cruise control for its $26,500 price. The sporty-styled Tucson N-Line gets unique wheels, a cloth-and-leather interior, and a digital instrument cluster (but no major performance upgrades) for $30,600, while the Limited justifies its $34,700 price with a panoramic sunroof, Smart Park assistance, and 10.3-inch infotainment screen. HTRAC all-wheel drive is a $1,400 option across the board.

This handsome Limited HTRAC tester, painted a greenish Amazon Gray, costs about $36,100 before the as-yet-unconfirmed destination and handling, a good bargain for its full-figured equipment set as long as you’re not seeking athletic performance from your small crossover. The $36,930 Nissan Rogue Platinum AWD follows a similar formula, though it has better fuel economy and ergonomics. Still, the new Hyundai Tucson rises to the top of the class in terms of space, comfort, and style while matching competitors’ powertrain and handling star graphs. Alongside the Palisade and Sonata, the Tucson is yet another must-shop from Hyundai.