Hyundai Explains The Science Behind The 2021 Tucson’s Intricate Lights

It's literally done with smoke and mirrors.

Once upon a time, having hidden headlights generally meant the lights would pop up from the hood or front bumper when turned on. Some cars concealed lights in the grille behind grille-matching covers, with the classic 1968 - 1970 Dodge Charger arguably being the most well-known example of them all. Hyundai says its new Tucson also incorporates hidden lights, though they're hidden in plain sight as part of the SUV's parametric grille.

In this case, hidden is certainly debatable. Looking head-on at a new Tucson with its lights off, it's not hard to distinguish the lights from the rest of the grille. Still, they are technically part of the grille, and it's rather interesting how Hyundai incorporated the lenses into the Tucson's smiling face. In short, the automaker utilizes half-mirror tech that involves applying a thin layer of a metal surface coating on the inner part of the outer lens. In conjunction with the smoked chrome grille, the overall effect is a singular presence on the front clip. Hyundai also talks about clever lighting at the rear, though it's not really hidden.

Of course, things aren't quite as simple as that simple. The Tucson's lamp assembly is rather complicated, as the above photo gallery shows. Notching everything into the grille requires numerous components, and the nature of the design requires more power to the LEDs so they shine brightly through the parametric grille. In turn, that requires sensors to ensure temperatures don't get too hot in the lenses, so yeah, getting clever on a design can certainly add complexity. And with all the components in this light assembly, it could be a fortune to replace in an accident.

Get To Know The New Tucson: 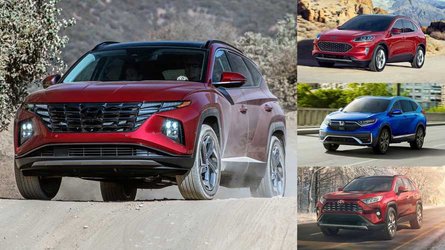 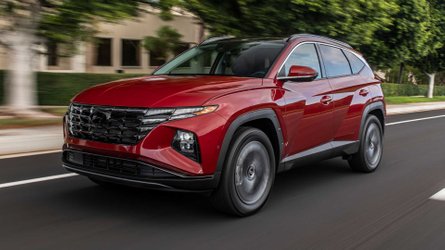 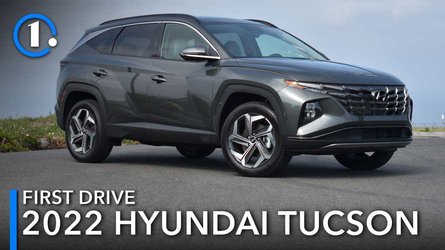 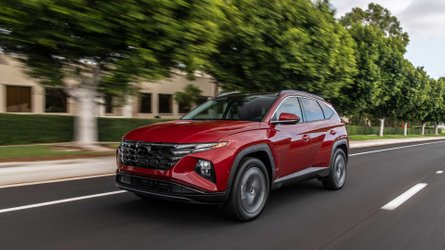 2022 Hyundai Tucson Pricing Reveals Something For Everyone

Still, there's no argument when it comes to unique styling these days from Hyundai. The SUV segment is positively filled with cookie-cutter shapes and the new Tucson absolutely stands out among the crowd. You can see it standing out on US shores in the spring of 2021, when it goes on sale as a 2022 model.

Offenbach, 10 December 2020 – Hyundai Motor has released new details about its signature Hidden Lighting technology, which recently made its debut in Europe with the launch of the all-new Tucson.

Most concept cars designed by automakers stand out due to their vivid, high-tech designs. However, most of these models do not go on to enter mass production. The all-new Tucson, on the other hand, bears an almost identical look to Hyundai’s Vision T SUV Concept, which was unveiled at the 2019 LA Auto Show. Vision T gained public attention at the time for conveying Hyundai’s new “Sensuous Sportiness” design identity and a bold radiator grille featuring futuristic Parametric Hidden Lights.

In 2019, Palisade, Hyundai’s flagship SUV globally, became the first vehicle to be equipped with the company’s Hidden Lighting technology. Its long, vertically stretched tail lamp is connected to a matte chrome garnish. Usually, the garnish is just one of many design elements that adds a three-dimensional effect; but when turned on, it gives off subtle rays of LED lighting and glows softly. These early Hidden Lights were introduced primarily for aesthetic reasons, adding beauty to Palisade’s tail lamps.

Later that year, another model, the eighth-generation Sonata, became the first Hyundai model to feature Hidden Lighting technology in the headlamps. Sonata’s designers, also guided by the “Sensuous Sportiness” design identity, found a novel way to hide LED lamps in chrome garnish. They achieved this by applying chrome surfaces inside Sonata’s Daytime Running Lights (DRLs), which appear like a regular chrome garnish when the lights are off. This was accomplished through a “laser-etching” process, which etched the chrome over the LED at different intensity and intervals. Sonata’s DRLs provide increased visibility due to the wider area of light emitted by the application of Hidden Lighting technology.

The most distinctive feature of the all-new Tucson is that it perfectly reproduces the bold and futuristic frontal design of the Vision T Concept. When its lights are switched off, the front of the vehicle appears covered in dark, geometric patterns, with no distinction between the grille and the seamlessly integrated signature LED DRLs.

The all-new Tucson’s DRLs are about five times larger than those of the new Grandeur. Therefore, if the laser-etching technique were to be applied to drill fine holes for effective light penetration, it would look different than the radiator grille when switching off, and the manufacturing time would be too long. To produce the all-new Tucson’s large lamps, Hyundai utilised state-of-the-art half-mirror lighting technology. This process involved applying a thin layer of specialised metal surface coating on the inner part of the outer lens. When the DRLs are switched on, the dark chrome grille appears to transform into jewel-like shapes, bringing an eye-catching element to an otherwise sleek appearance.

The structure of the all-new Tucson’s Hidden Lights

As the new construction method was applied, Hyundai’s engineers proceeded by verifying their reliability and made improvements accordingly. By setting up harsh virtual environmental conditions by varying the heat sources inside and outside of the lamps, they were able to test for cracks and for heat expansion. The engineers applied nickel-chrome materials to provide heat resistance, while using subtle dark chromium colours in the radiator grille to ensure both durability and shade. As a result, the all-new Tucson’s Hidden Lights can withstand complex environmental conditions.

Adding materials to the LED lamp’s lens naturally reduces light penetration, reducing efficiency. It was therefore necessary to reinforce the brightness of the lights in order to adhere to safety standards. Hyundai increased the power and number of LED units in order to increase the brightness so that it exceeded the required level, even after applying the nickel-chrome coating.

Thanks to the increased performance of LED modules, it was possible to ensure the power and visibility of the LEDs. This allowed Hyundai’s designers to integrate jewel-like lamps by applying half-mirror-type lights. In addition, the outer lenses were coated with nickel-chrome on the inside. This means they look exactly like the radiator grille when switched off, and also serve as the DRLs and direction indicator lights while switched on.

However, the increased amount of electricity also means an increased temperature inside the lamps. In response to this, Hyundai introduced Over-Heat Protection (OHP) technology. This system uses a temperature sensor to prevent damage. If the sensor detects excessive heat, it immediately reduces the amount of power in order to regulate the lamp module’s temperature, providing a safety net that manages to satisfy the design, function, and durability of the lamp, without affecting brightness.

The all-new Tucson’s designers also applied Hidden Lighting technology to its equally-dramatic tail lamps. These appear as triangular parts arranged on either side of the tail lights and stretch horizontally. The grey translucent lenses partially block out light from the outside when the lights are switched off. When the LED lights are switched on, the light curtain lens spreads the light widely and evenly, completing the intense look that appears as if the triangles spread their “wings” together.

However, the implementation method differed from that of the DRLs, which used the half-mirror technology. The outer lens of the tail lamp was processed through the use of both a translucent lens and a black lens with a relatively low penetration rate. In addition, the inner parts of the back cover were all coloured black to maximise the Hidden Lighting effect. Hyundai’s designers completed the look of the all-new Tucson’s unique rear tail lamps with engraved triangular patterns. When the lights are off, these parts hide the light curtain lenses and conceal them.

Hyundai intends apply its Hidden Lighting and half-mirror LED technology to more models in the future. In particular, the new processing technique can be used for much larger lamps, such as those of the all-new Tucson. The company expects that its future self-driving vehicles will be able to send information directly through their lamps to surrounding vehicles and pedestrians alike. In taking the Vision T Concept’s Hidden Lighting technology to the next level, the all-new Tucson demonstrates that beautiful design can only be achieved through technological evolution.