We all went through an awkward phase as we grew up. Maybe you had frosted tips and wore a puka-shell necklace, were way into anime, or looked like the stereotypical emo kid. Mazda had a phase too, and while you try to ignore your quest to look like an extra from The O.C., we'd rather not forget about the Japanese brand's Zoom-Zoom phase.

That, broadly speaking, is because it's over. Mazda has outgrown Zoom-Zoom and is making a well-executed transition to its next stage in life – elegant fascias and crisp lines have supplanted the derpy smiling grilles and the organic-looking sheetmetal flourishes, while minimalist interiors with rich, luxurious materials are taking over for simple, functional, and affordable. Turbocharging, too, became common, as Mazda pushed for the status of “Near-Premium Automaker.”

But the 2021 Mazda CX-30 Turbo has us wondering if maybe, just maybe, Mazda should take it down a notch. Go back to cheap and cheerful value or embrace the fun and irreverent times where driving joy was more important than elevating the brand. You know, throw on a trucker cap or an Ed Hardy shirt and be Mazda again. This is a fine compact crossover, but it's the least Zoom-Zoom Mazda we've driven in a long time.

Raising Some Of The Stakes

That lack of Zoom-Zoom isn’t initially obvious by looking at the spec sheet. Like the Mazda3 Turbo, CX-5, and Mazda6 that came before it, the Mazda CX-30 Turbo's big addition is a force-inducted 2.5-liter four-cylinder engine and standard all-wheel drive. With 250 horsepower on deck and a backing track of 320 pound-feet of torque, this variant marks a huge improvement over the likable base engine, which offers an adequate 186 hp and 186 lb-ft of torque.

But what else do you get by stepping up to one of the three turbocharged trims? Aesthetically, there are black wheels and mirror caps, brushed aluminum roof rails, and a small “Turbo” badge on the tailgate. Even by the depressingly low standards of your off-the-shelf black accent packages, that's weak. 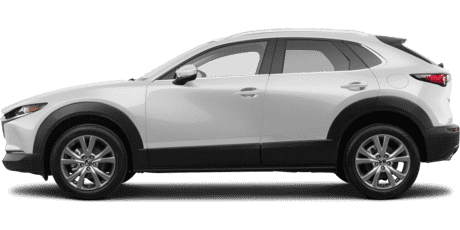 The cabin has fewer enhancements still – the only difference between the CX-30 Turbo and Premium trims and their naturally aspirated equivalents is a frameless auto-dimming rearview mirror. The high-end, turbo-only Premium Plus, though, has rear automatic emergency braking and traffic jam assist, which complements the full-speed adaptive cruise control (standard on every Turbo trim) with steering assistance below 40 mph.

Changes to the suspension account for the turbocharged 2.5-liter's added weight, with Mazda proudly saying it's “retuned to stay the same” with negligibly stiffer springs and dampers. A reinforced rear differential can handle the increased torque, while tweaks to the Sport mode up the power of the G-Vector Control Plus system, giving the CX-30 an even nippier character on turn-in. On the transmission front, a six-speed automatic remains, although with ever so slightly shorter gearing.

This is a roundabout way of saying that the CX-30 Turbo is about extra power and not much else. If you thought adding 64 hp and 134 lb-ft of torque to a 3,500-pound package would result in transformative performance, be prepared for disappointment. Sure, the CX-30 Turbo is quick, but it's not set-you-back-in-your-chair speedy. Instead, the performance is perfectly predictable, increasing everyday drivability without feeling like a bother.

You'll notice the turbocharging when you stand on the gas, sure, but more often than not it'll come into play when climbing gentle grades or executing lazy passes in traffic. There's a swell of torque that gives the CX-30 added confidence in these situations. Where the normal CX-30's six-speed might need to drop one or even two gears, the Turbo model plugs away. In terms of increasing refinement, there's little question that the CX-30 Turbo is an overwhelming success – the new engine even sounds a little nicer. But in every other way, this is the same subcompact crossover.

The CX-30 Turbo is about extra power and not much else.

For better or worse, Mazda's decision to tune the heavier CX-30 Turbo to handle like the naturally aspirated model is a success. Present the more powerful CUV with a corner and it demonstrates the same snappy reflexes and eager turn-in character as before, cementing its role as one of the most agile CUVs around. Overall, it's a fun partner that still manages to maintain on-road ride comfort. There's a similar story with the six-speed automatic and the brakes, the latter of which are unchanged from the standard CX-30, despite the added power.

More Power, Same Everything Else

Like so many automakers, Mazda is charging more for added power and not much else. That's fine. But in upping the CX-30's price to account for the turbocharged 2.5-liter engine, the brand upset the standard car’s balanced pricing position. With prices starting at $22,050 and extending to $31,870 for a loaded, all-wheel-drive CX-30 Premium (including $1,175 destination charge), the naturally aspirated car undercuts the premium competition Mazda wants to challenge, remains affordable to mainstream shoppers, and still manages adequate performance with its 186-hp engine.

The CX-30 Turbo's higher price point shines a harsh light on the anonymous styling. While Mazda essentially told Motor1.com that the black wheels and small Turbo badge were enough to distinguish the 250-hp crossover from the 186-hp original, we firmly disagree. For 99.9 percent of onlookers, a $35,000 CX-30 will look just like the $22,000 one.

The dollar-to-space ratio doesn't make a lot of sense, either. While we can accept the CX-30's minuscule cabin for $25,000 to $28,000, it's hard to swallow the tiny trunk (20.2 cubic feet) or the petite backseat (36.9 inches of legroom) at nearer to $36,000. Compare that with Mazda's own CX-5 and you'll find 50 percent more cargo space and an extra 2.5 inches of legroom. And on the premium end, the Mercedes-Benz GLA offers more rear legroom (38.0 inches) while the Audi Q3 has a roomier trunk (23.7 cubes). Neither of those advantages are huge, but they are notable.

And while Mazda is dead set on becoming a premium brand, we're not sure it's done the legwork to convince people. The company is building some exceptionally pretty cars, and they remain good to drive, but it's impossible to change how people see a badge in just a couple years. Hell, ask Hyundai and Kia about that uphill battle. But the biggest concern, especially in the case of our test model, is that the CX-30 has entered an incredibly competitive part of the market.

The Honda CR-V Hybrid Touring, a loaded-up Hyundai Santa Fe SEL, a Jeep Cherokee Limited, a Ford Edge SEL, an Audi Q3 40 Premium Plus, and a bare-bones Mercedes-Benz GLA 250 are all available within $1,000 to $2,000 of our $35,720 as-tested price. More damningly, Mazda's own CX-5 Grand Touring Reserve starts (with front-drive, mind you) at $36,560, or just $840 more. It's nearly as well equipped – you'll miss a few small active safety items, like automatic rear braking and traffic jam assist – far more spacious, and arguably as attractive and enjoyable to drive.

The 2021 Mazda CX-30 Turbo is by no means a bad car. On the merits of just being a subcompact crossover, this is an attractive option that features a gorgeous cabin, an impressive roster of safety equipment, and the kind of performance that makes everyday driving a breeze. That it's still fun in the corners only helps matters. But in the broader context of the Mazda brand, the CX-30 Turbo is a worrying move away from what made the company so compelling in the first place: unapologetic, affordable fun.