2019 Audi Q3 Premium Plus Review: What We Were Waiting For 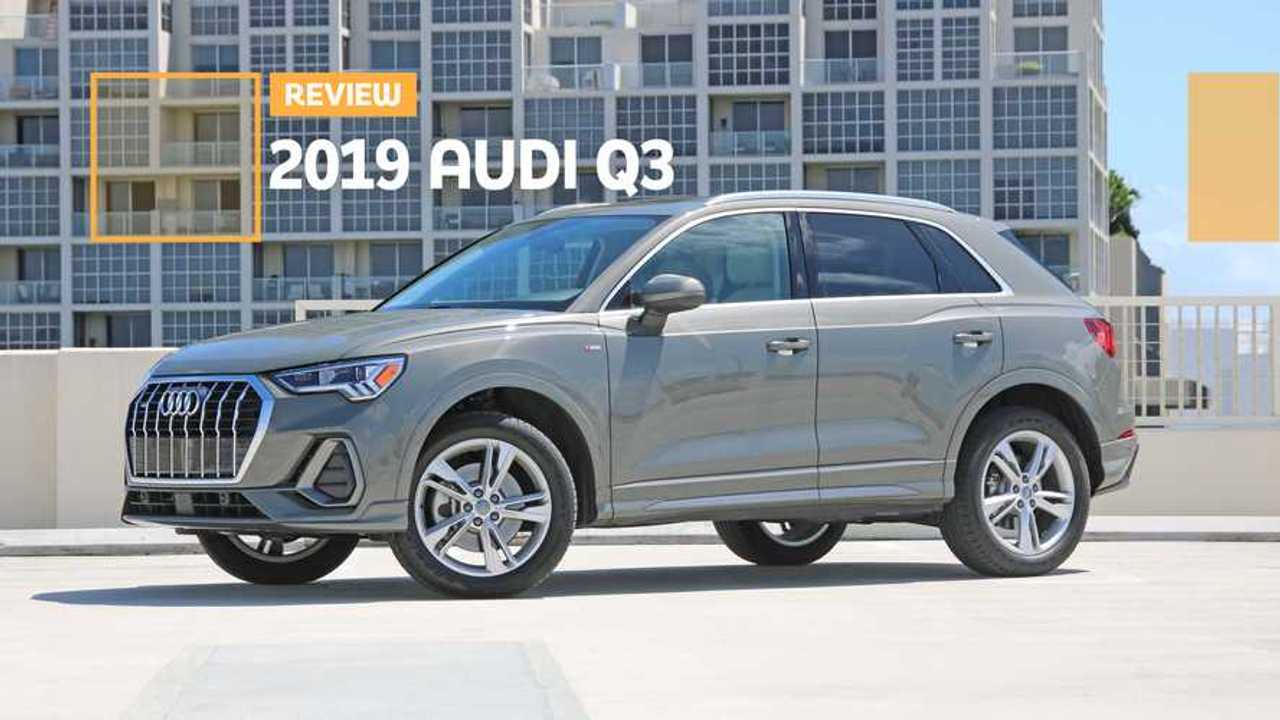 When the first Audi Q3 arrived on American shores, it was already something of a dinosaur. Released internationally in 2011, Audi of America didn't start importing the compact crossover until 2015, where it arrived with a legacy cabin and technology that lagged behind its newer, larger siblings.

While still a likable product, the Q3 lacked the freshness of its competitors, the Mercedes-Benz GLA-Class and BMW X1. It took a few years but in mid-2019, Audi put the new Q3 on sale. This redesigned crossover has all the trimmings of a modern Audi product, finally making the Q3 as clever and fresh as its newer siblings. It comes up short in a few areas, though, with meager fuel economy for a small, turbocharged crossover. At the same time, its rivals, (notably the BMW X1) are more engaging to drive.

Vehicle ratings updated in January 2021. A vehicle's ratings are relative only to its own segment and not the new-vehicle market as a whole. For more on how Motor1.com rates cars, click here.

Audi's conservative and refined exterior design has undergone something of a renaissance over the past couple years, with the Q8 and E-Tron informing the design of the company's other crossovers.

The Q3 ditches its predecessor's anonymous look in favor of a more aggressive fascia. Highlights include more emotive headlights and a prominent eggcrate grille. The squat-looking rear end is tight and clean, with taillight signatures reminiscent of Audi's larger CUVs. The Q3 is clean in profile, with a fast D-pillar and handsome character lines over the front and rear wheel arches.

The cabin is, for the most part, lovely. The design is clean and, although it's less reliant on touchscreens, still reminds us of the Q8. The big distinction between the Q3 and Audi's larger crossovers is the bank of buttons and knobs for the climate system rather than a separate, dedicated touchscreen. It's simple and functional. There are only two interior elements we really dislike. Both the key fob and the traditional gear lever look and feel like something you'd find on a $20,000 Volkswagen rather than a $44,000 Audi.

A high seating position and wide, supportive, leather-wrapped seats make the Q3 a fine way to while away the rush-hour commute. Visibility is excellent to the front and sides, although the slim rear window means rear visibility suffers somewhat. Still, as a place to hang out while sitting in traffic, the Q3 is just fine.

Material and build quality is, typically, excellent here. Aside from the flimsy and unattractive gear lever, everything in the Q3's cabin feels fastidiously fastened together. This is a quiet interior, too, with little wind and tire noise making its way to the driver. Ride comfort is adequate but could certainly be more comfortable. Our tester's S-Line trim mandates at least 19-inch wheels, with 20s available as an $800 option. Our advice, if you can give up the aesthetic benefits of the larger alloys, is to pass on the S-Line and take the 18s that come standard on the base Premium and the mid-range Premium Plus trims.

The second-row bench is adequate for two tall adults, with 36.1 inches of legroom, although those passengers are better off with longer legs than taller torsos. The Q3 has an aggressive rake to its roofline that has a dramatic impact on second-row headroom – the Audi's 37.6 inches is only half an inch greater than the swoopy BMW X2 and is down an enormous 4.3 inches on the more conventionally styled X1. Your author was brushing his head against the roofline, although only just.

Man, Audi’s Virtual Cockpit is just an excellent piece of technology. The cluster display is beautiful, with plenty of adjustability in the way it displays information and, considering all the capability, a relatively shallow learning curve. The same is true of the MMI infotainment system. It's attractive and easy to use, although once we came to grips with the 12.3-inch digital gauge cluster, we used that almost exclusively for basic functions. We wish Audi offered a way to stow the 10.1-inch center screen, like you can on the A3. Regardless of which display you opt for, both are responsive to inputs and brisk in action.

As part of the $2,000 package that adds Virtual Cockpit, customers will also enjoy two other pieces of advanced tech: wireless Apple CarPlay and handwriting recognition. The wireless setup is excellent, maintaining a consistent connection between an iPhone and the Q3's infotainment. As for the handwriting recognition, it makes entering destinations on the nav system quick and easy.

Other impressive tech includes an available USB-C charging port (in addition to the three USB-As scattered throughout the cabin). USB-A has been the ubiquitous setup for ages, but friends, replacing at least some of these ports with USB-C is darn exciting, if only because you can just stick a cord in without worrying about whether it's the right side up. The Q3 Premium Plus trim also adds a wireless charge pad and a “signal booster”. We didn't notice much improvement in cell reception, although to be fair, we weren't really looking for it.

Stop us if you've heard this one before: this small crossover has a turbocharged 2.0-liter engine. Shocking, we know, considering nearly every small CUV has a 2.0T under hood. In this case, the four-pot produces 228 horsepower and 258 pound-feet of torque. That sounds like enough to get about, until you realize the Q3 tips the scales at a staggering 3,916 pounds.

It takes an even seven seconds to get to 60, a full seven-tenths longer than a BMW X1 xDrive28i takes to do the same. The 3,655-pound X1 has identical outputs from its 2.0-liter engine, and both cars have an eight-speed automatic sending that power to all four wheels. Despite being slower on the stopwatch, the Q3 feels quick enough for everyday driving. There's ample low-end torque, making this hefty high rider feel spry off the line. But it's a boring car to accelerate in.

It's boring to drive, too. The Q3 just kind of… exists. It negotiates turns easily enough, but the Audi is never fun or eager in the way that vehicles this size should be. That, more than its straight-line disadvantage, is probably down to the ample weight. Throw the Q3 into a bend and it rolls; the behavior is predictable, but there is a lot of body motion. Someone at Audi headquarters hit the mute button on feedback, too, as the Q3 simply fails to vocalize what's happening between rubber and road. We shouldn't expect telepathic behavior, but this Audi could certainly stand to be more engaging and entertaining during the daily grind.

The Q3 Premium Plus packs almost every piece of active safety gear Audi has in its quiver. It's all standard on the range-topping Prestige, although the price to add full-speed adaptive cruise control on the mid-range Premium Plus is an attractive $800. If you pass on that opportunity, your Q3 will still pack automatic emergency braking, blind-spot monitoring, lane departure warning, and an automatic parking system. LED headlights are standard on every trim.

Unsurprisingly, this suite of tech earns the Q3 a Top Safety Pick Plus prize from the Insurance Institute for Highway Safety.

Despite its small size and turbocharged four-cylinder, the Q3 is not especially efficient. The EPA rates this Audi at just 19 miles per gallon in the city, 27 on the highway, and 22 combined, among the worst in the class. We hate to reference the X1 again, but it enjoys a sizable advantage at the pump, returning 23 mpg city, 31 highway, and 26 combined. The Cadillac XT4 nets 22 city, 29 highway, and 24 combined, while the Volvo XC40 nets 22 city, 30 highway, and 25 combined. That said, while all three of these competitors require premium fuel for their turbocharged 2.0-liter engines, the Q3 will happily burn 87-octane petrol.

Prices for the Q3 start at $34,700 for the base Premium trim without the S-Line package, and thankfully, they don't climb much from there. Getting the sportier aesthetic costs a modest $1,300, while jumping from the Premium to our Premium Plus trim demands just $3,100. It's possible to get a well-equipped Q3 for just over $40,000. Don't do that, though.

There are packages you'll want, and our tester had the most important: the $2,000 Navigation package adds the full Virtual Cockpit suite along with a navigation function for the 10.1-inch center display. It also includes wireless Apple CarPlay. You want this setup. We'd also recommend the $800 Driver Assistance package. There's also an $850 Bang and Olufsen audio system – you can pass on that if you want. All told, you can snag the car shown above for $44,690, including a $995 destination charge.

The Q3 undercuts its chief rival, the all-wheel-drive-equipped BMW X1 xDrive28i rather easily – that car starts at $37,200. Option up an X1 to match our Q3, though, and the out-the-door prices aren't all that different. We'd expect to spend around $46,000 on a comparable X1. Whether the X1's superior performance trumps the Q3's $1,500 advantage and excellent tech implementation is up to the consumer and we don't envy them for having to make the decision.