The 2019 Lexus UX looks nothing like the CT hatchback it essentially replaces. And that's good, considering the two are vastly different vehicles. The Lexus UX is handsome, efficient, and actually pretty darn fun to drive, unlike the prior Lexus hybrid hatchback. The base 200 model scores an admirable 6.4 stars out of 10 on our scale. But after driving the hybrid model, we’re confident this is the one to get.

With help from a pair of electric motors, the Lexus UX 250h takes everything we love about the pure gas-powered model and amplifies it. The UX Hybrid is more efficient (obviously), more powerful, and only slightly pricier than its non-hybrid sibling. All things considered, the Lexus UX 250h is a seriously solid luxury subcompact.

The Lexus spindle grille either works or it doesn't. On the UX, it does. The subcompact crossover looks surprisingly good with the Lexus face affixed, and even better with a lower chrome trim accent piece and a superb (no-cost) Nori Green Pearl paint job. The rest of the body is edgy, making the UX stand out over its more staid competitors. There's even a bit of body cladding above the wheel wells to butch it up a bit. The rear light bar is a unique accent piece you’ll find on few other cars in the class, and the standard 18-inch, two-tone wheels improve the styling even more.

With the optional Glazed Caramel faux leather and matching Glazed Caramel "Washi" dash (part of the $1,675 Premium Package), the Lexus UX feels like one of the more premium options in the class. No, you can't get real leather on the seats, but even without it, the Lexus UX's cabin mimics that of a more expensive vehicle. The front seats feature leatherette with a nice quilted pattern and black inserts, while high-quality stitching covers the dash and door panels. You do get nice, real leather on the steering wheel and shifter. And even though the back seats don't feel as well-finished as the two front seats, the UX still gives off a premium vibe. 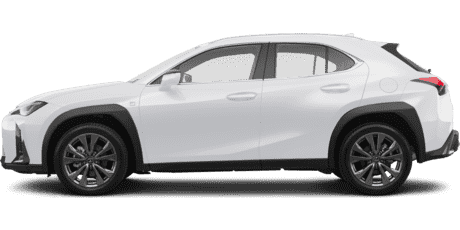 There's a lot to like about sitting in the driver's seat of the Lexus UX. The subcompact crossover has a low-down seating position, which makes it feel more like a hot hatchback from behind the wheel. The faux leather is soft and form-fitting; the steering wheel is chunky, easy to adjust, and positioned well; and the pedals are well-placed, too. Even with the low-down seating position, the large front windshield and windows offer plenty of visibility – looking out of the tiny rear window, though, isn't great.

We also like the UX Hybrid's on-road quietness. There's little-to-no engine noise in the cabin at low RPMs (thank the electric motors and good sound deadening). And at high speeds, little audible wind or tire noise. Talking to your passenger takes only a whisper.

But spacious the UX is not. The tiny Lexus feels tight from any seat, which brings its score down some. The UX Hybrid’s 37.2 inches of front headroom is slightly worse than what you get in the Volvo XC40 (37.6 inches), and noticeably down compared to the Cadillac XT4 (39.5 inches), Audi Q3 (39.6 inches), BMW X2 (39.8 inches), and others. The backseat is also extremely cramped; the UX feels too tight to comfortably fit your six-foot-tall author over long stretches. And the numbers support that. Its 33.1 inches of rear legroom is worse than all of the above vehicles mentioned by a noticeable margin. The next closest is the Audi Q3 with 36.1 inches of rear legroom.

The Lexus UX's default infotainment screen measures just 7.0 inches. But the optional 10.3-inch display in our tester is the better option, even if it costs $2,200 and isn't a touchscreen. The on-screen graphics are crisp, the home layout is clear, and because it's angled towards the driver, the screen is easy to read. But the infotainment setup suffers from the same frustrating trackpad (a.k.a., the Remote Touch Interface) found in other Lexus products. And even though the company adds Android Auto to the UX for 2020, our 2019 tester only has Apple CarPlay and Amazon Alexa voice compatibility.

But the optional content (though some of it pricey) makes those two issues easier to overlook. A moonroof is $1,000, a power rear liftgate with a kick sensor is $600, a color head-up display is $500, an auto-dimming rearview mirror is $325, a heated leather steering wheel is $150, and a wireless charger is just $75. There's even a Wi-Fi hotspot for up to five devices (part of the $2,200 multimedia display). Of all the Lexus products currently on sale, the UX is inarguably one of the most forward-thinking in terms of tech.

Powered by a 2.0-liter four-cylinder engine and aided by a 24-kilowatt-hour battery pack that powers a trio of electric motors, the Lexus UX Hybrid produces 181 horsepower. That's more than the standard gas-powered model (169 horsepower), even if the UX Hybrid is no performance crossover. Torque from the electric motors dissipates just as quickly as it arrives, and the 2.0-liter engine lacks the top-end grunt you get from other, more-powerful options in the class. This is not a quick crossover; the Audi Q3, for example, feels punchier.

But the UX makes up for its lack of power with hatchback-like agility and atypically crisp, quick steering. The suspension is taut and responsive, but maybe a bit harsh for normal driving conditions. The F Sport model undoubtedly rides better with its adaptive dampers. The electronically controlled gearset that mimics a continuously variable transmission is inoffensive, and the brake pedal is a bit spongey. Otherwise, things like braking and power aside, the Lexus UX Hybrid is a fun vehicle to toss around, horsepower be damned.

Brownie points to Lexus for having the only pure hybrid subcompact luxury crossover in the U.S. The UX Hybrid's next-closest competitor is the Mini Countryman All4 PHEV – but even the Mini, which at least offers plug-in charging, returns a mere 27 miles per gallon combined (though it can drive up to 12 miles on battery-power alone). It also isn’t a true "luxury" vehicle. The Lexus UX Hybrid, meanwhile, gets up to 41 mpg in the city, 38 on the highway, and 39 combined, making it the second most efficient crossover on the road. Only the Kia Niro (52/49/50) is better.

But look at the competition. The Lexus UX Hybrid holds its own price-wise in a class of pure gas alternatives. The Audi Q3 starts at $34,700, the Cadillac XT4 starts at $35,695, and the BMW X2 starts at $36,400. Only the Volvo XC40 is more affordable with a starting price of $33,700. The gas-only UX is the better value of the two, but even the hybrid option undercuts many of its alternatives.