The new Encore GX is a better Buick, but struggles with its position in the market.

The year 2021 marks the second in a row that GM's near-premium Buick brand has sold two different vehicles with the name "Encore" on the back. There are a few good reasons for that, but if you take one thing away from this review, it's that you want the Encore GX rather than the normal Encore.

While the two cars share a name, the commonality more or less stops there – the Encore GX is built in a different factory, in a different country, on a different platform, and with different powertrain options. It's smarter, better looking, and more efficient. The Encore GX's only perceptible flaw relative to the Opel-based car that came before it is the price tag. That's not to say the GX is free of other issues, though. This is a far better Encore, but still a so-so subcompact crossover.

Of GM's four brands, none have offered such a consistent string of visually attractive vehicles as Buick. The Encore GX, though, stands out as a dramatic improvement on an already attractive vehicle. The GX is only three inches longer than its predecessor, but almost all of that is between the axles – the proportions are far cleaner because of this gain. But the subtle floating roof, strong wheel arches, and modern front and rear ends are all significant improvements, too. Buick nailed the Encore GX's exterior design.

There's less progress in the cabin, though. It's neither as premium nor as luxurious as its exterior would suggest, and too similar to the GX's down-market sibling, the Chevrolet Trailblazer. A mish-mash of plastics and faux leather litters the dash, while common GM switchgear abounds. The black-on-black color scheme is drab and uninviting, although the Whisper Beige or Signet designs on Buick's consumer page induce little excitement, either. 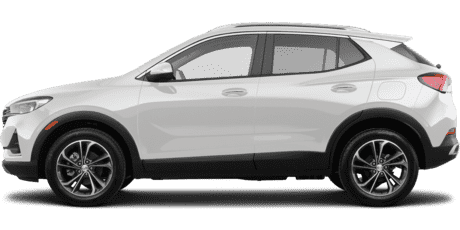 The extra length in the Encore GX's wheelbase yields a slightly larger cabin overall and noticeably larger cargo area compared to the standard Encore. But if you were hoping for a plusher or more refined driving experience, the GX is more of the same and, in a few areas, a bit less than its older sibling.

Total passenger volume is up from 92.8 cubic feet to 94.3, which translates to a noticeably roomier first and second row. The front seats offer ample space, with more than enough headroom and even plenty of shoulder room. A 10-way power driver's seat is standard on all but the base trim, while the range-topping Essence we tested wears upholstery that Buick claims is leather. The material itself is inoffensive, but it lacks the richness or soft feel of real hides.

Second-row passengers can stretch out somewhat, with the GX offering up 36.0 inches of legroom to the normal Encore's 35.7 – both models best a Mini Countryman (33.8 inches) but fall short of more traditional competitors like the Mercedes-Benz GLA (38.0 inches). The cargo hold is where the GX stretches its lead over the older Encore, with 23.5 cubic feet of space to 18.8, and a max of 50.2 to 48.4.

Steps backward happen, though, with noise, vibration, and harshness from under the hood. As with the Trailblazer we tested last year, the Encore's turbocharged three-cylinder is a thrashy, unpleasant singer, with Buick's trademark QuietTuning doing little to mute the 1.3-liter engine. At least the Encore's ride is plush, with enough sound deadening to hide suspension impacts and tire roar, and the right tuning to hide most small and medium road imperfections.

Most of the equipment works well, too. Buick's current infotainment – a reskin of what the GM offers in Chevy, GMC, and Cadillac products – is responsive, and the 8.0-inch touchscreen offers decent graphical fidelity. The layout, as we've noted in other reviews, is logical and easy to learn, so even tech-averse consumers will come to grips quickly. Wireless CarPlay functionality was faultless during our testing, with the system connecting quickly on startup and showing none of the bad manners we've encountered in other vehicles.

Other features, like GM's rear camera mirror and wireless charge pad, are little things to make life easier. The head-up display is helpful, but the flip-up glass plate feels a little low rent and the image itself is tiny. But hey, at least the green font is mostly visible with polarized sunglasses.

The Encore GX is available with one of two three-cylinder engines. The base turbocharged 1.2-liter and optional turbo 1.3-liter are classic examples of the breed, with the latter engine packing the most oomph, at 155 horsepower and 174 pound-feet of torque. Performance is diesel-like, with a swell of low-end torque dominating the driving experience and making low-speed, urban commuting a breeze. Peak twist arrives at just 1,600 rpm, so there's seemingly always torque available in around-town motoring.

Task the Encore with high-speed commuting, though, and it struggles with the same problems that afflict most turbocharged three-cylinders and diesel-powered engines: it runs out of steam fast. There's little power to work with above 3,500 rpm, so any time you stand on the gas pedal, you'll face an excruciating wait for the speedometer to climb.

A nine-speed automatic is available but pairing front-wheel drive with the larger 1.3-liter engine requires a continuously variable transmission. There's some rubber-bandiness in this CVT when asking for full power, but it's competent overall. Our biggest issue is that it exacerbates the 1.3-liter's horrid soundtrack. As in the Trailblazer we tested last year, this engine sounds harsh, unrefined, and almost agricultural in tone.

The ride in the Encore GX is quite good, but that comes at the expense of the handling. The steering is deader than Generalissimo Francisco Franco and the Encore's body moves freely when processing a corner.

We don't write this often, but props to General Motors for including a comprehensive active safety suite on every trim. Regardless of the Encore GX you order, it'll have automatic emergency braking with pedestrian detection, automatic high beams, and lane-keeping assist with lane-departure warning. The only active safety items that cost extra – adaptive cruise control and a surround-view camera – come with the Advanced Technology pack, which includes a head-up display and rear camera mirror for $1,790.

In practice, our Encore GX tester worked well enough. The lane-keeping assist received the most criticism, as it lacked the sophistication found in pricier rivals, such as the Mercedes-Benz GLA or Audi Q3. Befitting its inbetweener status, though, it was on par with what you'd find in a Mazda CX-30, with occasional ping-ponging between lane markers. The camera-based adaptive cruise control was also decidedly average, not wowing us with its ability to manage vehicle speeds in traffic, but also not scaring us either with sudden braking events.

One thing we'd like to call out that doesn't get enough attention is GM's Teen Driver Assist. Standard on most of its models, Teen Driver Assist is a helpful way for parents to monitor their child's driving behavior and to set limits on things like speed and audio volume. We wish more automakers would take GM's lead with this sort of tech.

Issues with the Encore's three-cylinder engine aside, it's an efficient little bugger. Paired with a continuously variable transmission that sends power to the front wheels, you'll score segment-leading fuel economy regardless of which competitive set you're looking at. Our tester, the most efficient configuration, returns EPA estimates of 30 miles per gallon city, 32 highway, and 31 combined.

If you consider the Encore a sub-compact premium crossover (as we do), it largely betters the pricier competition. The all-wheel-drive-only Audi Q3 (19 city, 27 highway, and 22 combined), and front-drive versions of the BMW X1 (24 city, 33 highway, and 27 combined) and Mercedes-Benz GLA 250 (25 highway, 34 highway, and 28 combined) struggle against the Encore. That said, each of those vehicles features more power and added powertrain refinement. Still, only the Buick comes close to our class target of 32 mpg combined.

The Encore GX starts at $24,200 (not including destination), which easily undercuts the Audi, BMW, and Mercedes-Benz we consider rivals. The Buick even acquits itself against mainstream competition from Mazda, Mini, and Fiat – the base CX-30 is cheaper, but the Encore is even with the Fiat and more affordable than the Countryman. Our range-topping Essence tester, meanwhile, starts at $29,595, which is about equal with the Mini and range-topping 500X, but still well below the Germans.

Things go to pieces quickly, though, if you dig into the options. For a start, Buick offers exactly one color as standard, regardless of trim. Unless you're willing to live with white, plan on ponying up at least $495 or at most $1,095 for a different shade.

The nickel and diming continues with the 1.3-liter engine adding $395. The two main packages – Advanced Technology and Experience Buick – carry prices of $1,790 and $1,500, respectively. You can safely pass on the latter, as its only addition of note is the smallish “panoramic” sunroof. The $770 Convenience pack is a good value, though, adding a rear camera mirror, automatic parking assist, wireless charge pad, and front/rear parking sensors.