If we know anything about the automotive marketplace, it’s that certain cars have cult followings. It’s not necessarily exciting, but the Honda CR-V sure is loved by many. For 2020 the company adds the first-ever CR-V Hybrid to the lineup, hoping to entice even more buyers into its best-selling car.

We first drove the hybrid earlier this year and came away impressed with its refined, pleasant character. However, the competition Honda faces is tough, and it’s worth remembering that there are several other winners in this segment, like the Toyota RAV4 Hybrid, Ford Escape Hybrid, and (potentially) the upcoming Hyundai Tucson Hybrid.

The CR-V Hybrid is a great crossover, and it’s downright better than its gas-only twin. With legit competition from the hot-selling Toyota RAV4 Hybrid (available in both conventional and plug-in forms), an electrified Honda CR-V was a no-brainer for the company to build. Headlining this car’s spec sheet is a strong set of EPA ratings: 40 miles per gallon city, 35 highway, and 38 combined. This means a gain of 8 mpg combined over the standard CR-V and a powertrain that feels just as easy to live with on an everyday basis.

Powering the hybrid is a 2.0-liter four-cylinder engine, mated to two electric motors. Total system output is 212 horsepower and 232 pound-feet. Those figures are moderate improvements over the gas-only model, but that’s not the point. You buy this car for the good it does to your monthly gas bill, not because it bombs on a highway onramp.

The CR-V Hybrid is a great crossover, and it’s downright better than its gas-only twin.

Though I’m greedy and would appreciate just a bit more torque, the engine is otherwise rock-solid. It’s quiet as can be when transferring between gas and EV power and produces enough oomph to keep you from cursing in traffic. A single-speed, direct-drive transmission manages the power, which the CR-V can split between the axles. The CR-V Hybrid impressed over a week of testing, with its transmission beating some of Honda’s CVT efforts.

The downside comes in the cabin, where the CR-V uses Honda’s 7.0-inch touchscreen and an ancient operating system. This display’s size barely cuts it and the software is borderline unacceptable for a new vehicle. I’m not a fan of the confusing menu layouts – the more modern system in the new Accord and the upcoming Civic is much cleaner – while multiple inputs in a short time span often cause the screen to freeze. This software has been around since 2017 and it needs to go, but the bones date back much further. This is one of those times where I offer thanks to Apple CarPlay. 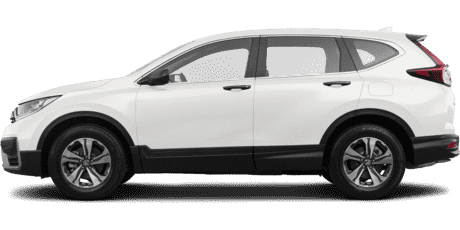 At least the CR-V includes plenty of safety kit. Every trim includes standard automatic emergency braking, lane-departure warning, lane-keep assist, and adaptive cruise control. During our test, each of the systems work as intended, but the lane-centering can be a little aggressive at times.

Overall, I really do like the CR-V Hybrid. But this class is only getting more competitive, and I’m not sure this car would be my first pick. You’d have to pull me away from the more expensive Toyota RAV4 Prime for that to happen.

The Honda CR-V used to be one of the first crossovers I'd recommend when friends asked for advice. Now, and in contrast to my colleague, the CR-V Hybrid is more or less the only CUV I recommend. There are CUVs that are more efficient, affordable, and better to drive, is a perfect mix of those qualities, matching its class-leading, gas-powered counterpart in most ways and exceeding it in a few others. The CR-V Hybrid is one of the best gas-electric models you can get.

That's partially because it doesn't shake up the standard CR-V formula. The exterior is indistinguishable aside from “Hybrid” designations on the front fenders and subtle blue tinting around the edges of the Honda badge on the nose and tail. It's a similar story in the cabin, where Honda's push-button shift mechanism takes the place of the conventional CR-V's flimsy shifter as the lone significant change.

This new variant matches its gas-powered counterpart in most ways and exceeds it in a few others.

Under hood, the CR-V Hybrid ditches the likable turbocharged 1.5-liter inline-four for a naturally aspirated 2.0-liter, a 1.4-kilowatt-hour lithium-ion battery (packed in the floor, so there's no loss of cargo space), and a pair of electric motors. Total system output is a hearty 212 horsepower and 232 lb-ft, and all-wheel drive is standard.

The only person that will realize this CR-V features an engine and two motors is the driver. This crossover features the same smart tuning as the Accord Hybrid I drove a few weeks back, relying on the electric motor as much as possible – the gas engine only kicks in under hard or high-speed acceleration. The CR-V is smoother and more refined because of this arrangement, although like the Accord, I found the gas engine too buzzy and occasionally too loud when it's running.

More On The CR-V:

To cap things off, this all-wheel-drive CUV returns far better fuel economy than its gas-powered counterpart. Look for 40 miles per gallon city, 35 highway, and 38 combined – those numbers best the front-drive, ICE-powered model by 11, 3, and 9 mpg, respectively. In my 150 miles of mixed driving, I basically matched the combined figure at 37.5 mpg. Not only will the CR-V Hybrid be cheaper to run, then, but with just $1,200 separating the base Hybrid EX from the gas-powered EX AWD, you'll see a return on that investment pretty darn quick. Like I said, this is the CUV for most people.

So why would I pick it over its two more modern rivals? For a start, the interior is a substantial improvement over the plasticky Escape. The materials are a much higher quality and the available faux wood looks fantastic in the CR-V. The RAV4 is a tougher nut to crack. It’s the more efficient choice, but Toyota’s Synergy Drive hybrid system isn’t quite as refined as the CR-V’s – the Honda relies less on the gas engine at low speeds, so some of the bad manners that come from juggling power sources are absent. Still, if ultimate fuel economy is your priority, the RAV4 might be a better choice.