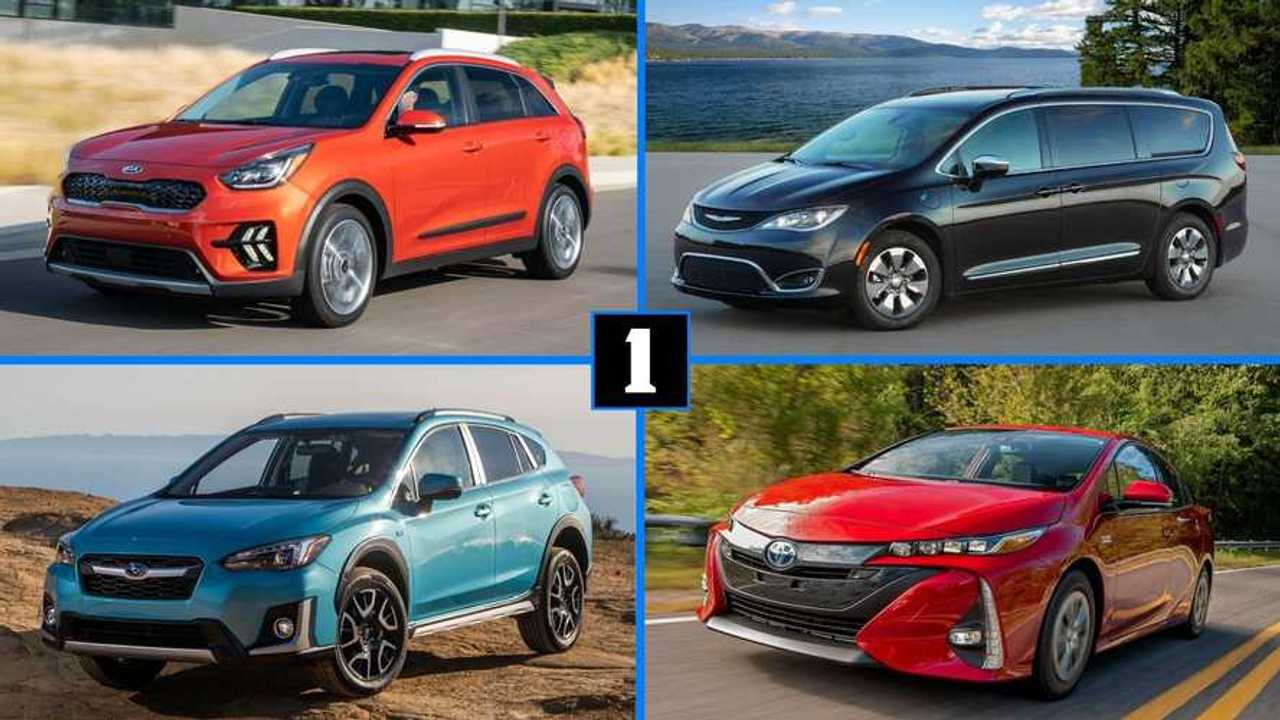 With respect to death and taxes, the one thing we can always count on is fuel prices going up at some point. For every happy situation that drives the cost of gasoline down to unsustainably low prices, there comes a crisis that sends the price surging. So why not insulate yourself from that uncertainty with an ultra-efficient car or SUV?

That's where we come in. While automakers continue to offer tiny hatchbacks with small, thrifty engines and electric motors to amplify them, today's lineup of hybrids for sale in the US covers compact and midsize sedans, and even crossovers and minivans. And there’s even variety among electrified offerings.

Plug-in hybrids, which feature far larger batteries and typically enough all-electric range to cover the standard American’s commute, have joined traditional hybrid models, which blend gas and electric power without the driver’s input. The addition of the plug makes for more fuel efficient driving, but the asking price is higher too. And if you don’t have regular access to an outlet, good luck realizing the benefits of modern plug-in hybrids.

Meanwhile, there are more hybrids on the way, with brands like Mercedes-Benz and Jeep getting in on the action in the near future. No matter whether you choose a plug-in or standard hybrid, today’s a good time to get in on the electrified movement. Check out our full list for a breakdown primer on today's best fuel-efficient hybrids and plug-in hybrid vehicles.

Ah ha, you thought the top hybrid would be a Toyota Prius, didn't you? Nope, it's a Hyundai. And in a lot of ways, the 2020 Ioniq, available as a standard hybrid, a plug-in, or an all-electric model, is the anti-Prius. Sure, it's efficient, but the Ioniq looks and drives like any other four-door that starts in the mid-$20,000 range. This Hyundai isn't just a great choice if you're trying to save fuel – it's a great choice if you want to save fuel without anyone really knowing.

Get pricing on the 2021 Hyundai Ioniq Hybrid.

The trusty Toyota Prius remains one of the most fuel-efficient vehicles on the road. Slightly more expensive than the Ioniq and a lot more polarizing, Toyota's trend-setting hybrid is a better accessory for conspicuous ecowarriors than just about any other car you can buy . While it wasn't the first hybrid, the Prius' combo of a gas engine, an electric motor, and a battery set the standard for all future hybrid vehicles.

Get pricing on the 2021 Toyota Prius.

If the Ioniq is too anonymous and the Prius too obnoxious, the Honda Insight is the sweet spot. With styling heavily influenced by the Civic (and occupying the place of the discontinued Civic Hybrid), the new Insight features a naturally aspirated 1.5-liter engine and a lone electric motor to produce 151 horsepower. Fuel economy is ample, although the Insight isn't quite as efficient as the aforementioned cars from Hyundai and Toyota. That said, this Honda is safer for 2021.

Get pricing on the 2021 Honda Insight.

The Toyota Corolla Hybrid is a weird car, considering the Prius exists. The two cars share powertrains, with a 1.8-liter gas engine, an electric motor, and a nickel-metal hydride battery, along with an electrically controlled continuously variable transmission. The Corolla's more conventional shape, though, is less aerodynamic, which is where the difference in fuel economy comes from. That said, the Corolla Hybrid is nice alternative in the Toyota family if you can’t stomach the way the Prius looks.

Get pricing on the 2020 Toyota Corolla Hybrid.

Compact cars return the best fuel economy, but mid-size sedans balance efficiency with passenger-hauling space, and there's no better example of that than the current Toyota Camry Hybrid. Riding atop the automaker's latest TNGA architecture, the Camry Hybrid is relaxing to drive and easy to live with. Unlike the Corolla and Prius, though, it features a larger, more powerful 2.5-liter gas engine, along with an electric motor and e-CVT, to help motivate its additional heft.

Get pricing on the 2020 Toyota Camry Hybrid.

A new and intriguing hybrid is the Hyundai Sonata Hybrid. The base model, the Blue, is the most fuel efficient, but there are a number of trims available for the gas-electric Hyundai. Take this route and you'll score an avant-garde exterior design along with a high-quality interior setup, which includes a healthy array of driver-assistance technology. There are some good deals on the Sonata Hybrid right now, too.

Get pricing on the 2021 Hyundai Sonata Hybrid.

The updated Kia Niro FE straddles the line between crossover and hatchback, but what's certain is that it's very efficient, pairing a 1.6-liter gas engine with a 43-horsepower electric motor and a 1.6-kilowatt-hour lithium-ion battery. It looks rather funky too, and unlike the similarly sized compacts on this list, the shape is more versatile and the ride height a smidge more commanding.

Set for a refresh, the 2020 Honda Accord remains the best choice for sedan drivers seeking efficiency and a pleasant driving character. The Accord is as close to being fun to drive as anything on this list, mixing a 2.0-liter four-cylinder engine with a 181-hp electric motor and a 1.3-kWh lithium-ion battery. The total output is a healthy 212 hp, which is plenty for a sedan that tips the scales at just 3,327 pounds

Get pricing on the 2020 Honda Accord Hybrid.

The new kid on the block, the 2020 Ford Escape SE Sport Hybrid adds a bit of visual spice to its efficient character. It also, in our humble opinion, is the best version of the new Escape to drive. Beyond the 2.5-liter engine, electric motor, and battery, the Escape Sport Hybrid adds a 12.3-inch digital instrument cluster, 19-inch wheels, and blacked-out exterior treatment.

Get pricing on the 2020 Ford Escape SE Sport Hybrid.

Toyota's line of Prime vehicles, the tag it applies to plug-in hybrids, are a good blend of out-and-out efficiency and useful all-electric range. See the Prius Prime, which goes even wilder with its exterior design while offering consumers up to 25 miles of all-electric range and 640 of total range. With its larger lithium-ion battery drained, it'll still net a healthy 54 mpg.

Get pricing on the 2020 Toyota Prius Prime.

Like we said, the Ioniq is available as a plug-in hybrid, where it bests the Prius Prime on all-electric range. The Toyota is a bit thriftier overall, though, and can go a smidge further in total. And unlike the Prius, the design differences between the Ioniq Hybrid and Ioniq Plug-In are very, very minor.

Get pricing on the 2021 Hyundai Ioniq Plug-In Hybrid.

The third-generation Ford Escape introduces the line's first plug-in hybrid model, and its stats are impressive. Packing 37 miles of electric range and 41 mpg combined when that battery runs flat, it also undercuts its chief rival from Toyota by just over $5,000. That said, the Escape PHEV is only available in front-wheel drive – do you pick the efficiency or the ability to send power to all four wheels?

Get pricing on the 2020 Ford Escape PHEV.

While it comes in $5,000 pricier than the Ford Escape PHEV, the Toyota RAV4 Prime is available with all-wheel drive, and it can go further than the Blue Oval, too. Total EPA electric range sits at 42 miles, while the EPA's stated range overall is 600, 70 more than the Escape. But the Toyota is less efficient overall, with lower combined fuel economy scores. Picking between these two is no easy feat.

Yes, you can go off-road in a plug-in hybrid, provided you check out the Subaru Crosstrek Hybrid. This one is a bit of a weird one at the moment, as Subaru has just updated the gas-only model – it's unclear what the future holds for the Crosstrek Hybrid, but for now, this lifted PHEV returns 90 miles per gallon equivalent and can cover 17 miles on a full charge.

Get pricing on the 2020 Subaru Crosstrek Hybrid.

This variant of the BMW i3 isn't so much a plug-in hybrid as it is a proper electric car with a gas-powered generator attached, like the old Chevrolet Volt. A 42.2-kWh battery, far larger than any other car on this list, is standard, along with a small gas engine that can increase its range from 126 miles to around 200. But the fuel tank is tiny, and the cost of the range extender is high, at about $4,000. And you better hurry to find a new i3 with the gas engine at dealers; BMW is pulling the plug on this plug-in.

Get pricing on the 2020 BMW i3 with Range Extender.

While other automakers are getting in on the hybrid minivan game, Chrysler was the first there, and it remains the only brand with plug-in capability. The Pacifica Hybrid is a charmer, to the point that it topped our list of highest rated vehicles in 2019. The 32 miles of electric range is ample, and an EPA range of 520 miles is more than enough for some solid road-tripping. You give up the innovative Stow-n-Go system in this model, but the added efficiency is worth it.

Get pricing on the 2020 Chrysler Pacifica Hybrid.

Both Mini and plug-in hybrid ownership are lifestyle choices, so combining the two makes a good bit of sense. The updated Mini Cooper SE Countryman features the familiar shape of Mini's high-riding five door, but pairs it with a pleasant three-cylinder engine and an electric motor. The 18 miles of range isn't stellar, but it is definitely usable, especially if you have access to charging both at home and at work. And as a bonus, like all Minis, this plug-in hybrid is a joy to drive.

Get pricing on the 2021 Mini Cooper SE Countryman.

Which hybrid gets the best gas mileage?

The Hyundai Ioniq Blue is as efficient as hybrids get, offering owners up to 57 miles per gallon city, 59 highway, and 58 combined.

Which hybrid SUV gets the best gas mileage?

The Kia Niro FE straddles the line between crossover and hatchback, but we'll classify it as the former. It nets 52 mpg city, 49 highway, and 50 combined. If you're looking for a more traditional crossover, the Ford Escape SE Sport Hybrid nets 44 mpg city, 37 highway, and 41 combined.

Are all hybrids fuel efficient?

Compared to gas-powered cars, typically. But it depends heavily on how the owner will use them. Hybrids do their best work at around-town speeds, where they can recuperate energy and take advantage of their ability to run with the gas engine off. But if you spend more time on the highway or in high-speed, constant-throttle situations, you rob hybrids of their key advantage. In that case, you may see better results with a gas- or diesel-powered engine.

Which PHEV has the longest range?

The BMW i3 with Range Extender packs the longest plug-in range, but there's a caveat: it's not really a plug-in, so much as it is a pure EV with a small gas engine attached. It technically nets 125 miles of all-electric range. Among more typical plug-ins, the Toyota RAV4 Prime offers up to 42 miles of range, although the star in this regard is the dearly departed Chevrolet Volt, which packed over 50 miles on a single charge.

Is a plug-in-hybrid vehicle better than hybrid?

It depends on the use case. Consumers with short commutes may be able to take full advantage of their plug-in's all-electric range and essentially eliminate fossil fuels from their daily lives. Traditional hybrids, though, typically offer better fuel economy than a PHEV once its all-electric range runs out. Plus they’re cheaper than plug-in hybrids because their battery pack – typically the most expensive component of electrified vehicles – is much smaller.