At the risk of boring you with sales figures, know that the Honda CR-V is America’s most popular crossover and hasn’t seen a sales drop in over 10 years. So, there’s little reason to fix what ain’t broke. And the facelifted-for-2020 model follows that adage to a tee; a light fascia reconstruction, new wheels, and additional interior bits separate this year’s CUV (barely) from its predecessor. The only major update comes in the form of the CR-V Hybrid, but it’s a welcomed one.

A 2.0-liter four-cylinder engine, plus two electric motors (one starter-generator and another propulsion motor), equals one CR-V Hybrid. Add extra power, additional range, and more safety tech to the base model’s already successful formula, and you have the same best-selling Honda CR-V buyers love, only better.

Vehicle verdict added in February 2021. A vehicle's verdict is relative only to its own segment and not the new-vehicle market as a whole. For more on how Motor1.com rates cars, click here.

Honda CR-V vs. Mazda CX-5: The Head And The Heart Of SUVs
2017 Honda CR-V Review: The Best Gets Better

The CR-V Hybrid and its pure-gas-powered sibling look almost exactly the same. Only the blue-tinted Honda logo, a barely noticeable “hybrid” badge on the tailgate, five-LED fog lights (on EX and above), and a lightly redesigned bumper divulge the hybrid CR-V's secret identity. And we appreciate Honda's restraint, given there's nothing wrong with the CR-V's styling as is. For 2020, the entire range (Hybrid included) gets a redesigned front fascia and rear valance, darkened grille accents, smoked taillights, and new wheels. Granted, the CUV won't win any awards for its styling – by our eye, the Toyota RAV4 and Mazda CX-5 are more appealing – but the light makeover won't scare off traditionalists, either.

That same straightforward thinking carries over to the inside of the CR-V Hybrid. Little separates the Hybrid’s cabin from the standard model’s, but with model-specific graphics on the digital instrument cluster, a push-button gear selector, and new drive modes (Sport, Econ, and EV), it feels more functional. The well thought-out, nicely trimmed interior makes for an extremely nice place to sit. Base LX models get cloth seats, but our Touring tester wears cushy leather instead. Mixing in soft black plastic and optional faux wood-grain trim pieces, the CR-V Hybrid has a more premium feel than some of its competitors. It's one of the more comfortable cabins in the entire class and offers tons of space to stretch out, both front and back.

Even with batteries underneath, the hybrid CR-V keeps the traditional CR-V's best-in-class 40.0 cubic feet of rear cargo room behind the second row, and 75.8 cubic feet with the second row folded flat. And a full redesign of the center console for 2020 (on every trim) improves storage for both driver and passenger, offering three configurations for carrying everything from cell phones and glasses to larger purses and handbags.

Front and center there's a 7.0-inch touchscreen running the latest Honda infotainment setup. But “latest” doesn't equal “new;” the same software from 2017 carries over, and it's starting to feel dated. The home screen is small and cluttered, touch responsiveness isn't great, and there aren't enough physical buttons. At a minimum, there needs to be a tuning knob. Adding Apple CarPlay and Android Auto alleviates some of those ease-of-use issues (and an optional Qi wireless charger, new for 2020, is nice), but the entire setup could stand to be more intuitive. 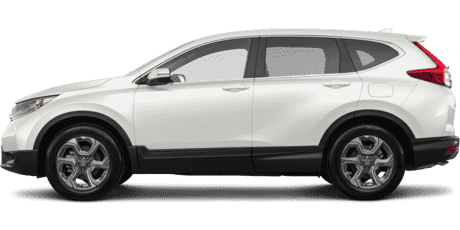 At least there are safety features aplenty. Every CR-V boasts standard active safety equipment for 2020, Hybrid included. Even the base LX model offers automatic emergency braking with pedestrian detection, lane-departure warning, lane-keep assist, and adaptive cruise. The only thing the EX models and above get that the LX doesn't is blind-spot detection with cross-traffic monitoring.

And all the systems work as intended. The CR-V Hybrid's lane-centering system keeps the vehicle to the centered without being too forceful, adaptive cruise maintains a steady pace with the car in front of it, and braking is smooth down to zero. But Honda is ditching the passenger-side blind-spot camera on all of its cars, which projects an image of the adjacent lane to the infotainment screen. That used to be one of our favorite safety options in any car.

The Honda CR-V Hybrid is quite likable on the road. No, it won't win any awards for handling, nor wow with its straight-line speed – the CR-V Hybrid is just very good all around. Its cloud-like suspension and improved sound deadening (part of the 2020 facelift) make the CR-V Hybrid one of the most comfortable crossovers in its class. Steering is nicely weighted, too – it's neither too heavy nor too soft – and the continuously variable transmission is inoffensive, for the most part; it only whines when pushed, such as during 60 mile-per-hour sprints.

The 2.0-liter four-cylinder engine and two electric motors produce a total output of 212 horsepower and 232 pound-feet of torque. Both figures beat the pure-gas-powered CR-V (190 hp and 179 lb-ft), and that torque number bests any other hybrid in the class. And all that extra torque arrives in an instant; throttle responses are quick, and the additional kick from the electric motors give the CR-V Hybrid more oomph over its pure-gas counterpart, which makes the compact crossover pretty sprightly in the city and decently quick on the highway.

No, it won't win any awards for handling, nor wow with its straight-line speed – the CR-V Hybrid is just very good all around.

Tug at either of the “paddle shifters” behind the steering wheel, rather than rowing gears (obviously, because it's a CVT), and they adjust the regenerative braking function. The left paddle adds more regenerative braking power, and the right paddle reduces it. In the most aggressive regenerative setting, the CR-V Hybrid slows almost to a standstill; it's a great resource for longer downhill bouts, as it charges the battery quickly, but it's not especially useful on flat roads. Also, it shuts off without warning. And while there is an “EV” mode, the CR-V Hybrid only travels about one mile fully charged before the gas engine kicks in. The CR-V Hybrid definitely isn't a replacement for your electric vehicle or plug-in hybrid.

All-wheel drive comes standard on the CR-V Hybrid. And versus the Toyota RAV4 Hybrid's electric motor-driven all-wheel-drive system, which applies power reactively, the Honda's all-wheel drive uses a more proactive electronic diff that engages power before wheel slip. We tested both cars on the dirt, and found the CR-V Hybrid's all-wheel-drive system more fluid, sending power to each wheel individually as needed. It's a minor feature that makes all the difference.

The calling card of any good crossover is fuel economy, and the Honda CR-V Hybrid gets 40 miles per gallon in the city, 35 mpg highway, and 38 mpg combined. That’s a 50-percent increase in city fuel economy over its pure gas sibling. We recorded even better numbers during our test: a sustained 45 miles per gallon in more than 30 miles of city driving. Impressive. Still, the EPA rates both the Ford Escape Hybrid (44/37/41) and Toyota RAV4 Hybrid (41/38/40) higher.

But of the bunch, the Honda CR-V Hybrid is still the most affordable. The base LX starts at $27,750, while the cheapest Escape Hybrid asks $28,255 and the entry-level RAV4 Hybrid costs $28,350. Our fully loaded Touring tester costs $37,070, which feels like a good price for all you get.

And at only $2,000 more than the gas-powered model, it's hard to argue against the Honda CR-V Hybrid. More efficient, standard with all the active safety you'll ever need, and very nice to drive – really, our only major gripe with the CUV is its outdated infotainment system. But, bottom line: the Honda CR-V Hybrid is another great option atop the already great CR-V.