Aspirational, in more ways than one.

Cadillac has seen epic highs and crushing lows in the past 20 years. But through these consistently inconsistent years, the Cadillac Escalade has remained a reliable bright spot for the brand. One of the few American luxury products confident enough to ignore the German competition rather than vainly chase after them, the Escalade has also entrenched itself as a cultural icon. This is the only Cadillac to see such success.

But while the Escalade stands out in the Cadillac lineup, the traits that made it successful are the same ones the company has relied on all along: Above all, be big, comfortable, and ostentatious. But the 2021 Escalade also takes on a technological leadership role, like the S-Class for Mercedes-Benz, introducing fanciful technologies unmatched in the brand's broader portfolio. The 2021 Escalade is a preview of what future Cadillacs should – and hopefully will – be.

Look At Me Now

While it remains a close relative of the Chevrolet Suburban and GMC Yukon underneath, the Escalade looks and feels is a flagship rather than just another popular product. That's clear the minute you get behind the wheel and gaze on the enormous tiered display. With three individual curved screens, spanning 38.3 inches in total – 7.2 inches on the driver's left, 14.2 inches in the middle, and 16.9 inches on the right – the Escalade has the biggest display housing on four wheels.

Cadillac turned to organic light-emitting diode (OLED) technology, like on high-end TVs, to make sure the screen real estate offers colors and resolutions to match its immense size. The result is the breathtaking clarity, brilliant contrasts, and ultra-rich black levels that TV snobs have spent years raving over, but in a vehicle that can tow 8,000 pounds.

The Escalade looks and feels is a flagship rather than just another popular product.

Cadillac says there are twice as many pixels as on a 4K TV – it won't tell us the exact resolution, but we'd guess better than 4K and worse than 8K. Goodness, does it look good. In particular, Apple CarPlay thrives on the new OLED setup – it's like high-dynamic range is at work, emphasizing brighter colors and showing icons with a degree of clarity normally reserved for, well, an iPhone. There's a crispness to every icon or letter that makes other modern systems, like BMW's iDrive, look like antiques.

Thankfully, you'll find as much joy interacting with the displays as you will looking at them. There's a thoughtfulness to the design and layout of all the different functions so that even the tech-illiterate will find the Escalade approachable. The largest display, at driver's right, fulfills all the duties of an infotainment system, the center screen is an instrument cluster, and the leftmost screen is for trip info or adjusting the layout of the head-up display or cluster.

That's it – histrionics and needless complications are absent here. If you can manage an older Cadillac infotainment system, this one will feel very familiar. The biggest change is the 14.2-inch digital instrument cluster. With two inputs (at most) on the left screen, drivers can replace the digital speedometer dial with a full-screen map, a night-vision camera feed, or a high-def view from the Escalade's nose.

With a destination programmed into the navigation, the computers use augmented reality to overlay directions on the feed – it's similar to what Mercedes offers, but in a more prominent and useful place.

Switching between these displays is quick and easy, which is the theme for the entire tech suite.

While Mercedes limits AR to approaching turns, the Escalade's camera can run continuously. Beyond that party trick, it's the system's potential that has us most excited. It's hugely consequential as a driver-assistance feature. Imagine using AR to highlight lane markers or obstacles in the road, display the status of traffic lights, warn of emergency service vehicles, or to visually block off roads with heavy traffic.

Switching between these displays is quick and easy, which is the theme for the entire tech suite. The new infotainment operating system accepts swipes and jabs and taps and all manner of inputs, serving up the next screen with haste.

Our range-topping Escalade Premium Luxury Platinum complements its huge interior display with a standard 36-speaker Studio Reference audio system from AKG. The Escalade is the company's first automotive effort (although its parent company, Harman, is deep in the business), but we hope this won't be its last.

This is hands-down one of the best audio systems on the road. Crank the volume up, and while you're busy trying to figure out how a crummy pop track streamed over Bluetooth can sound so clear, the 3D quality creeps up on you. It's all-encompassing sound on a scale we've never experienced in a car. The entire experience is brilliant to the point that it wowed even non-audiophiles. Not even Lincoln's excellent Revel audio system can match the Escalade's AKG unit.

A Good Place To Be

The Escalade’s cabin is so far beyond the company’s new sedans in terms of fit and finish that it feels like a product from another automaker. That’s why we’ve criticized the CT4 and CT5 so harshly – GM has this frustrating tendency to play favorites, putting its best efforts into a select few vehicles. The new Escalade is just the latest example of this.

The Escalade’s cabin is so far beyond the company’s new sedans in terms of fit and finish that it feels like a product from another automaker.

Beyond the eye-catching 38.3-inch display housing, the broader cabin shows off a clean, modern design dominated by horizontal lines. A beautiful strip of wood, sandwiched between the climate vents and the leather-covered dash upper, is the bedrock Cadillac built the screens on. There's abundant wood and leather on the doors, too.

What's missing? Plastic. Aside from the certain buttons, a cheap-feeling electric shifter, and the redundant control knob for the touchscreen infotainment screen, the Escalade does away with the cheap materials of the CT4 and CT5, even in hard-to-spot areas. That said, certain elements like the center console or door panels don't feel especially sturdy. And while it's a small thing, there's virtually no damping on the center console cubby – open or close it with any degree of force and the clatter shrieks of cheap, flimsy plastic.

During our testing, we also longed for more comfortable front seats. The Escalade comes standard with 12-way front seats, but our Premium Luxury Platinum ups the ante to 16-way chairs. There's little thigh or back support – the Cadillac's front seats lack the cosseting nature of a Mercedes-Benz GLS or Range Rover and the adjustability of the Lincoln Navigator's 30-way chairs.

We piled over 200 miles onto the Escalade during a day of testing and none of those were in a comfortable seating position. This is doubly odd, considering we found the chairs in the Yukon and Suburban inoffensive, with enough support for long legs and satisfying bolstering. The Escalade falls short here. 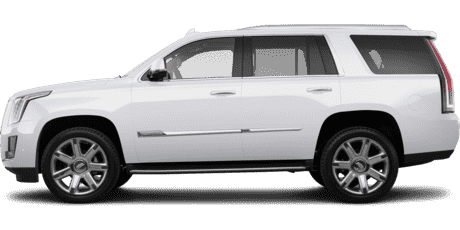 The Escalade is the third and final member of General Motors' redesigned large SUV line to cross our driveway since August. As with the Chevrolet Suburban and GMC Yukon Denali, it uses the same 6.2-liter V8 and 10-speed automatic, features the same magnetic dampers, air springs, and independent rear suspension, and benefits from all the same body enhancements as the Suburban and Yukon Denali.

Dynamically, the Escalade is identical to its more affordable siblings. Put these three SUVs in a Pepsi Challenge and we'd fail. Considering that, we aren't going to waste your time with another version of something we've already published twice. If you want detailed drive impressions, hop over to our reviews of the Suburban and Yukon Denali and pretend every mention of Chevy/GMC or Suburban/Yukon reads as “Cadillac” and “Escalade.”

The Cost Of More

Despite these similarities, the Escalade experience – vehicle dynamics aside – is dramatically different from the Yukon or Suburban and the price reflects that. The Escalade starts at $76,195 (even for the diesel), not including a $1,295 destination charge. That's $10 (no, that's not a typo) more than a Lincoln Navigator and $7,795 more than Caddy's sibling, the GMC Yukon Denali. The European competition undercuts the Cadillac, but you'll be living with a six-cylinder model and not saving too much coin – the BMW X7 xDrive40i starts at $74,900 and the Mercedes-Benz GLS 450 at $76,000 even.

Top-trim Escalades Platinums start at $101,290 and are available in either a Premium Luxury (featured here) or Sport aesthetic – unlike the Suburban High Country and Yukon Denali, things like the air suspension are standard. Four-wheel drive adds $3,000 to that price, regardless of style. Again, that overshadows the Germans – an X7 M50i comes in at $99,800 and a GLS 580 at $98,800, both featuring standard all-wheel drive – although the options sheet in the Cadillac is blissfully short.

You can spend $2,000 on night vision, $2,500 on SuperCruise, up to $1,225 on paint, and $600 on a towing pack. Beyond that, the options list is little more than kitschy accessories. Out the door, the Escalade featured here would cost $107,515, thanks to the fancy white paint and night-vision system. That's less than fully optioned European challengers, and it's only a little more than a loaded Navigator Black Label.

The 2021 Escalade is not a perfect vehicle. Its refined driving experience should be even more premium and more distinctive, and the cabin needs to nail the smaller details. But we've tested three new Cadillacs this year and the Escalade is the first one that feels worthy of the badge. Cadillacs should be big, comfortable, and ostentatious, but as the 2021 Escalade proves, cutting-edge tech is crucial. This remains an aspirational product for customers, but with its well-executed tech offensive, the new Escalade should be an aspirational product for the team at Cadillac, rather than another lone bright spot. Make them all like this, folks.

Notably, the Cadillac Escalade is on our list of the SUVs with the Best Towing Capacity.

See our list of all 3-row SUVs and Crossovers.