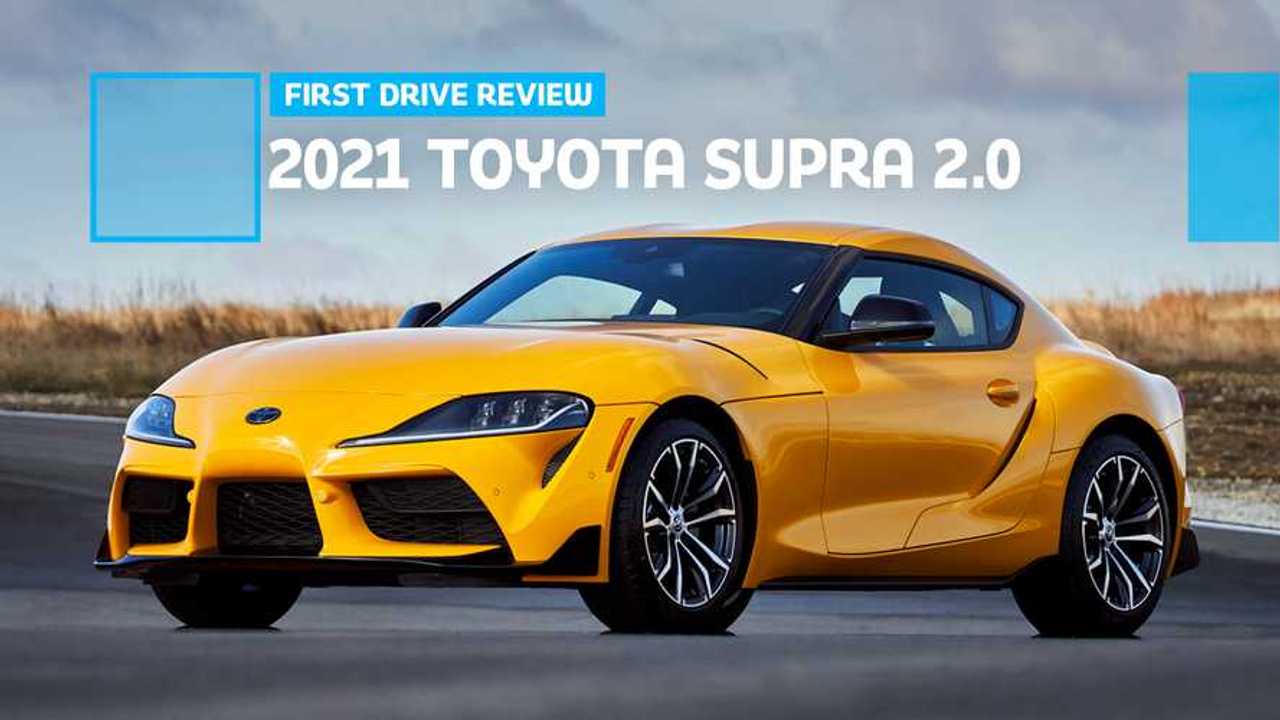 You’ll give up more than power in ordering the four-cylinder Supra.

Allow us to answer the biggest question about the 2021 Toyota Supra and its four-cylinder engine right off the bat: Should you buy this over the updated six-cylinder model? The short answer is “not yet.”

But don't blame the powertrain. In fitting a turbocharged 2.0-liter to the 2021 model, Toyota dropped some of the key performance and comfort equipment that made last year's Supra such a great all-around sports car. The 2021 Supra 2.0's equipment roster blows right past “affordable” and strays too close to “budget.”

What about the revised six-cylinder model, though? The temperature during our three days with the six-cylinder Supra rarely crept north of 40 degrees as snow squalls rolled through the area, preventing us from collecting much in the way of driving impressions. We've included what we could get from our frosty adventure in the 3.0 but are looking forward to a follow up test in the next few weeks.

The BMW-sourced turbocharged 2.0-liter in the new Supra 2.0 is plenty familiar to American consumers. At different power levels, it motivates everything from the new BMW 330e and X3 xDrive30i to the Mini John Cooper Works Hardtop. And yes, it's also found in the BMW Z4 sDrive30i. In the Supra's case, there's 255 hp and 295 lb-ft of torque, as with its German counterpart.

The 2.0-liter has a broad, accessible torque curve, with peak twist available from 1,550 to 4,400 rpm. But more importantly, you can wind out the Supra 2.0 without worrying about police attention. This engine revs willingly, but the available power is manageable and fun, rather than frantic.

The straight-line performance in the 2.0-liter is arguably more satisfying than the 3.0-liter.

But you don't need to beat this engine into submission (unless you want to, of course), even though it sounds swell at higher engine speeds. There's plenty of torque for everyday conditions so that driving around in Normal mode with the gearbox set to full auto is a relaxed experience. The Supra's new engine sacrifices none of the six-cylinder's livability.

That's also true of the gearbox. The Supra 2.0 shares its ZF-sourced eight-speed automatic with its six-cylinder counterpart, offering similarly capable performance in traffic. Set to manual and with the Supra's drive mode in Sport, the performance increases, with quick upshifts and eager downshifts via the wheel-mounted paddle shifters. Like almost everything else in the cabin, these are BMW paddles and they're merely okay – the materials could be better, as could the action, but swapping cogs via the wheel is still more entertaining than letting the computer handle things.

When the 2021 Supra debuted, Toyota tried to frame the four-cylinder as being the lightweight choice, and it's easy to understand why. But reducing the engine size by a third only accounts for some of the Supra 2.0's 200-plus-pound weight loss. This car also drops a pair of important performance items that come standard on the six-cylinder model: adaptive dampers and an active rear differential.

We're less concerned about the absence of the trick diff – it'd help while accelerating out of corners, but the grip levels are so high and the torque so manageable that the limited-slip diff rarely feels necessary – than we are about the fixed dampers. Every Supra rides on McPherson struts in front and a multi-link arrangement in back. But the six-cylinder car and its standard adaptive dampers felt more composed on rough roads, where the four-cylinder car exhibited more vertical motion (particularly from the rear axle). We didn't come across any mid-corner bumps during our dynamic testing, but it's possible to imagine the base car getting out of sorts when faced with such a challenge.

Do the adaptive dampers help handling? Probably, but Mother Nature prevented us from finding out for certain with the six-cylinder car. Whatever the answer though, the four-cylinder Supra is fun to throw around in corners, with tight body motions and predictable behavior. The steering is weighty and direct, which is no surprise considering the electric power-assisted steering is common across Supras.

We're less concerned about the absence of the trick diff than we are about the fixed dampers.

Both cars also come standard with staggered Michelin Pilot Super Sport tires (255s in front and 275s in back), but the Supra 2.0 uses 18-inch alloys and an aspect ratio of 40, compared to the 3.0's 19-inch wheels and 35-series tires. It may be personal preference, but we like the look of these smaller wheels on the Supra's body, and the slightly thicker sidewalls make for a marginally quieter ride. There's little tire noise, although the ultra-sticky rubber picks up tiny rocks on the road, bouncing them about the wheel wells.

Toyota also downgraded the brakes for the four-cylinder model, swapping red four-piston Brembo calipers and 13.7-inch discs in front for black single-piston stoppers and 13.0-inch rotors. The rear brakes retain the 3.0's base setup, featuring 13.0-inch discs. We didn't notice any significant difference in stopping power – the Supra 2.0's pedal was just as easy to modulate, while offering a satisfying feel in hard-braking situations.

What You Leave Behind

Slip behind the wheel of the four-cylinder Supra and, at first, it's hard to pick out that you're in the more affordable variant. Both cars share an 8.8-inch touchscreen display, running an older version of BMW's iDrive infotainment system. The sport seats, also plucked from the base Supra 3.0, wear leather and Alcantara trim and still do a fine job of keeping the driver in place.

But where the base 3.0-liter's equipment level feels out of place in a $50,000 car, the more affordable four-cylinder takes things further. The standard Supra 3.0 packs 14-way, power-operated seats and a 10-speaker audio system – the 2.0-liter model offers manually operated, unheated eight-way chairs and a meager four-speaker audio system. Pouring salt on the wound, the four-cylinder model offers little recourse when it comes to replacing these items.

What we want is a Supra 2.0 Premium – a four-cylinder version of the range-topping six-cylinder.

The lone option pack, the Safety and Technology package, addresses the speaker shortcoming with the same JBL-branded 12-speaker audio setup found in the 3.0 Premium. It also adds a full roster of active safety equipment, a navigation function for the infotainment, and wireless Apple CarPlay. But even a fully loaded Supra 2.0 retains the manual, unheated seats.

What we want is a Supra 2.0 Premium – a four-cylinder version of the range-topping six-cylinder with all the same performance gear. But is there enough space in the pricing scheme for such a vehicle? Toyota hasn’t announced pricing for the 2021 Supra yet, but based on 2020's prices and where we expect the Supra 2.0 to start, there is room. Right now, there's a $4,000 difference between the 2020 3.0 and 3.0 Premium. Apply that price to the four-cylinder, and there'd still be several thousand dollars separating a 2.0 Premium and the Supra 3.0.

The good news for Toyota is that the Supra 2.0 is a joy to drive, even if it's less posh than the 3.0 Premium. This four-cylinder Supra is light and energetic, a capable backroad companion for owners that want something more muscular than a Mazda MX-5 or Toyota's own 86 but aren't ready for the newly enhanced six-cylinder. But as a livable, everyday sports car, Toyota can and should go further to make shoppers of its newest Supra feel as comfortable as they want.