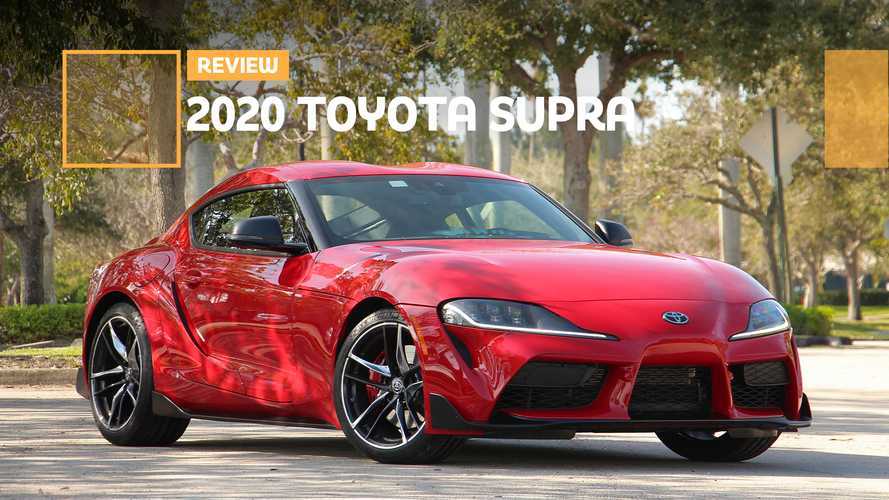 The Supra is great. Full stop.

Yeah, we know – the Toyota Supra and BMW Z4 are pretty much one and the same. Apart from the removable roof, the two cars ride on the same platform, use the same engine, and for the most part, have identical interiors both loaded with the latest BMW infotainment system. For a nameplate as storied as Supra, some purists might be put off by the obvious BMW parts. But, honestly, get over it.

The Toyota Supra is a great sports car, regardless of the context. It's quick, competent, and comfortable, with a refined ride and a punchy turbo engine that pairs well with BMW's impressive selection of tech and safety equipment. It's hard not to fall for the 2020 Supra, even with its obvious German ties (and some major additions on the way).

The Supra looks like a modern running shoe. Its long hood, short overhangs, and sweeping rear end, emphasized by a subtle fixed spoiler, give it definitive sports car proportions. In profile, only the Jaguar F-Type looks anywhere near as good. Some throwback cues in its DNA, like the double-bubble roof and ducktail spoiler, convey suggestive nods to the iconic A80, and even the sizable triple-beam LED headlights, with their extended LED accents, give off a retro vibe.

Another detail growing common in car design, and one that we like here on the Supra, is the “teardrop” air curtain, identifiable by the black vent below each headlight. The detail flanks three larger vents lurking underneath the Supra's elongated schnozz. But like a lot of the “vents” on the Supra, the air curtains aren't functional, and neither are the two exterior fascia vents, side profile vent, or rear taillight vent. They do nothing beneficial from an aerodynamic standpoint. If there's one thing we really dislike about the Supra's styling, it's the lack of functional trim pieces.

And the juxtaposition in moving from the exterior to inside the Supra is jarring. Anyone who's been in a BMW will immediately identify the Supra's German interior, apart from the Toyota badging and new carbon-fiber trim. Still, it's a nice place to sit. High-quality soft black plastic and leather cover most everything, and the optional 8.8-inch screen sits perched atop the dash. The interior, while boring, is clean, high quality, and comfortable nonetheless.

The Supra is a surprisingly good highway cruiser. The 14-way, electronically adjustable leather buckets are super comfortable, with good bolstering and great cushioning, while absorbent sound deadening keeps wind and tire noise out of the cabin. The only thing that penetrates the interior is the exhaust note, but it's a great noise, anyway.

Obviously, the Supra lacks back seats, which might be a turn-off for buyers wanting more of a touring car. If so, buy a BMW M2 Competition or an Audi TT. Ingress and egress can be tough for taller drivers, and there's a measly 9.9 cubic feet of cargo space. The new C8 Corvette, with its normal trunk and its innovative frunk, can hold up to 13 cubes, and even the Porsche 718 Cayman can carry up to 15 cubic feet. Outside of that, the Toyota Supra excels as a daily driver.

There's nothing proprietary about the Supra's tech. Nearly everything, from the optional 8.8-inch touchscreen (a 6.5-inch screen is standard) to the rotary dial, comes from BMW, specifically the Z4. That's a good thing and a bad thing. On the one hand, we'd like to see something more than a copy of what Germany already offers, but on the other hand, the automaker’s iDrive system remains one of the best infotainment systems around.

Everything is clean, functional, and easy to use. The iDrive controller gives you access to the settings and options menus quickly, while wireless Apple CarPlay (standard on the Premium model but a $1,195 option on the base Supra) connects seamlessly, for the most part, outside of a few instances. The digital instrument cluster doesn't offer a lot of customization options but does at least present clean readouts for things like speed limits, audio, exterior temperature, and others. In fact, the retro, video-game-inspired speedometer and tachometer are the only interior elements unique to the Toyota

But some of that tech comes at a cost. The aforementioned 8.8-inch screen with navigation and wireless Apple CarPlay, as well as the Supra-specific 12-speaker JBL audio system, cost $2,460 as part of the Navigation + JBL package. And Qi wireless charging is only available on the Premium model and above.

BMW's turbocharged 3.0-liter inline-six is one of our favorite engines. And it's just as great in the Supra. With 335 horsepower and 365 pound-feet of torque and a quick-shifting ZF eight-speed automatic aiding it, the Supra can hit 60 miles per hour in 4.1 seconds, Toyota says. But screw the stopwatch – the Supra feels much quicker in the real world.

A perfect fifty-fifty weight distribution and super sticky Michelin Pilot Super Sport tires make the Supra supremely good in the corners, too. Flick the switch to “Sport” mode and the steering and suspension tighten up for maximum flingability. The Supra doesn't feel as analog as its sibling, the smaller 86, but it has undeniable charm and a grin-inducing personality.

Turn the Supra's drive settings another notch to “Track” mode, and it’s almost too unruly for public roads. The throttle mapping is way too jerky in this setting. But as we learned in our First Drive, “Track” mode is great for, well, the track. There you can really push the limits of what the Supra is capable of.

What surprises us most about the Supra is how much available safety equipment there is. You get automatic emergency braking with pedestrian detection, lane departure warning with steering assist, and automatic high beams at no extra cost. Full-speed adaptive cruise control, as well as rear cross-traffic alert with rear automatic emergency braking is an extra $1,195 (Driver Assist package), and well worth it. Our tester (a well-spec'd Premium model) gets all of the available active safety equipment mentioned, and it all works flawlessly on the highway. Bumper-to-bumper traffic is a relative breeze – our only gripe is that the lane-keep steering assist can be too aggressive.

Compared to most cars (read: economy cars), the Supra's 24 miles per gallon city, 31 highway, and 26 combined isn't anything special. Thus, it scores just five points on our scale. But against other sports cars, the Supra is actually pretty good.

The Jaguar F-Type with a V6 gets 23 combined, the Porsche Cayman returns 24 combined, and the BMW M2 Competition, meanwhile, earns a lowly 20 mpg combined. The only direct competitor that's better is the BMW Z4 M40i, with which the Supra shares its base. The BMW, weirdly, earns 26 combined, 24 city, and 31 highway, despite offering more power and weighing slightly more.