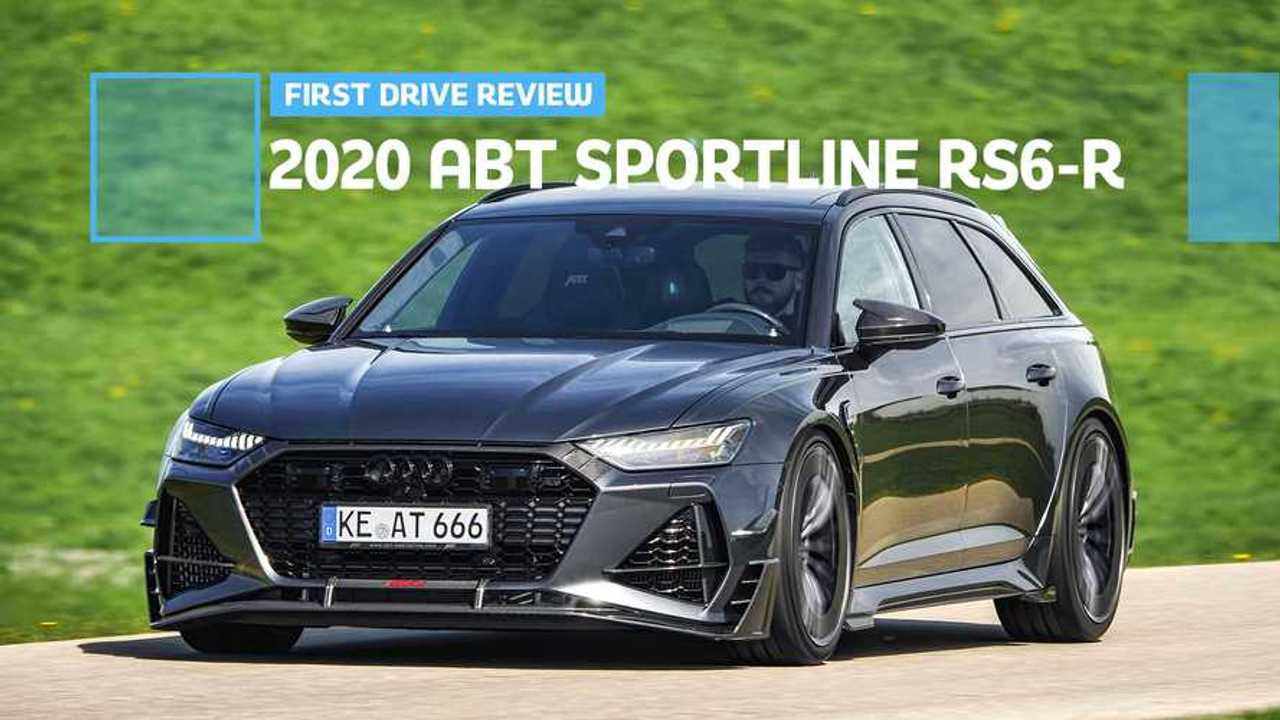 Editor’s Note: Motor1.com Germany recently spent some time with the outrageous ABT Audi RS6-R Avant. Naturally, we weren’t going to limit such a tale to our German-speaking audience and have translated and republished it here. You can find the original story here. All price conversions were correct at the time of publishing.)

This sinister-looking monster is the new ABT Audi RS6-R Avant, probably the ultimate upgrade of the new Audi RS 6 Avant with a hair-raising 730 horsepower. Sure, there will be companies that promise you even more power, but going with ABT should result in a similar level of reliability to an unmodified RS6.

The RS6-R is one of ABT Sportsline’s trademark offerings, a kind of RS 6 Plus Plus. But the reputation of the world's largest VW and Audi tuner is so great that this car is regarded by its customers as a production car. And this clientele is larger than one would expect. While ABT will build 125 cars at its Kempten factory, in the Bavarian region of Swabia, the majority of them sold out about two weeks after the official presentation in early April. Despite a price tag of at least 205,900 Euros ($222,800). As in the past, as soon as Audi announces a new RS 6, ABT starts getting inquiries.

What’s So Special About This Car?

In its 18-year career, the Audi RS 6 has earned a reputation as an absolute speed monster for all days and all weather. But where past models adopted different fascias and wider wheel arches, more recent examples have upped the aggressive appearance considerably.

Well, first and foremost it's all about the so-called ABT Power R performance kit. It consists of a modified turbocharger, a new intercooler, and tweaks to the engine electronics. The improvements breathe an extra 140 hp and 88 pound-feet of torque out of the twin-turbocharged 4.0-liter V8. Considering its standard output of 591 hp and 590 lb-ft, the RS 6 hardly needed help. But here comes ABT, with a station wagon that has more power than a McLaren 720S.

As far as the chassis is concerned, ABT benefits enormously from this RS 6’s excellent starting point. The current car is a quantum leap beyond its predecessor’s driving dynamics, thanks to the new rear-wheel steering setup. In the RS6-R, ABT lowered the ride height by 1.1 inches with height-adjustable sport springs and sport dampers on both axles. On request, the tuner can even replace the Dynamic Ride Control suspension (recommended for the standard RS 6) with a coilover setup.

In addition, ABT attached its own 22-inch alloys with 285/30/22 Michelin Pilot Sport 4S tires under the high-powered wagon. Don't worry about the big wheels, though, as the RS 6 comes standard with 22s, so there’s no risk of rubbing. Our test car also had sharp Aerodisc elements mounted behind the spokes. For an extra 200 Euro ($216), they’re an absolute must, at least in our eyes.

And, Do You Notice Any Differences?

Oh, and how! You would hardly believe how much quicker the ABT RS6-R is, even if you’ve had the pleasure of having your vital organs rearranged by the standard RS 6’s acceleration. This is a different level of brutality. ABT promises a zero-to-62 sprint of 3.2 seconds, four tenths faster than a factory RS 6. We don’t doubt that estimate. That there’s slight slip on the rear wheels when accelerating from a standstill (when did you ever experience that on a car with a Quattro all-wheel drive?) is definitely a good indicator of how potent the ABT treatment is.

The RS6-R is even more impressive at higher speeds. The acceleration is physically exhausting, like a roller coaster in free fall. But the ABT additions have hardly changed the characteristics of the twin-turbo V8. Could the tuner even change it, though? Emission regulations and particle filters have recently led to a pronounced off-the-line weakness in Audi’s sports models – including the the factory RS 6 (at least when you're not in Dynamic or one of the RS modes). Off-the-line punch is better with the RS6-R, but you have to take a short breath before it mercilessly rams your fist into your stomach.

A small but very cool side note: the new stainless-steel exhaust’s note is bassier, but only slightly more present – the sound mixes with a clearly audible whistling from the upgraded turbochargers when accelerating.

Is It Better Around Corners?

Our tester rode on the optional coilover suspension in addition to the RS6-R’s standard suspension tweaks. Due to the already remarkable driving dynamics performance of the production car, the differences, though, are rather small. The RS6-R is a bit flatter overall and shows a less body movement in corners, but please don't expect a completely new handling experience from this heavyweight.

That’s a positive, though. It’s amazing how compact, straightforward and nimble this 4,700-pound colossus can move. The steering is very light and a bit numb, regardless of the mode, but as we said: colossus, not Caterham.

Another pleasing aspect is that the upgraded suspension hardly compromises on comfort. It rides a bit tighter than the standard system but is far from annoying. However, we would make use of the height-adjustable suspension and raise the whole ride up a bit or two. Or would you like to live in constant fear for your expensive carbon fiber front splitter and side skirts?

Fortunately, very close to the original. ABT embroiders the standard seats with its insignia, installs "1 of 125" kickplates on door sills or along with a plaque on the dash in front of the passenger. You also get a grandiose steering wheel with Alcantara and carbon. And if you can't get enough of the carbon fiber, the tuner will also install appropriate panels for the center console and seat frames for 2,580 Euros (about $2,800).

But the mechanical measures are definitely noticeable. The handling seems sharper, while the forward thrust is simply unyielding. The same can probably be said about the car's appearance. This may not be everyone's cup of tea, but in the end it doesn't matter. The RS6-R achieved cult status long ago. This new generation just extends the myth.