The Lexus LS looks the part, but it’s lacking in key areas.

The Lexus LS 500 brings a fresh perspective to the crowded full-size luxury segment. It’s sharply styled (especially in the gussied-up F Sport package), and its twin-turbocharged engine delivers on its promise of performance and efficiency. But problems arise for the Lexus LS when you start looking elsewhere.

For one, the Lexus infotainment system is seriously outdated. Functionality is flawed, and even with Apple CarPlay, it still lacks Android Auto. And compared to what other options offer in headroom and legroom, the Lexus LS feels cramped. We appreciate Lexus’ attempt to inject some life into a segment that’s much of the same, but the LS feels like a fancy middle-of-the-road option. 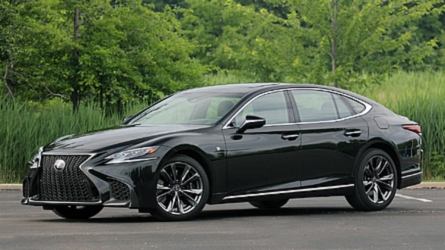 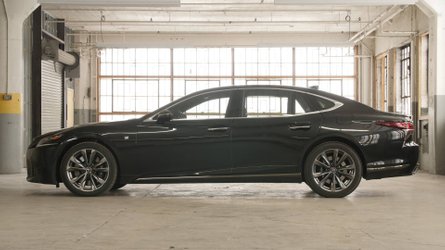 I think the highwater mark for the Lexus LS was back in 1989 when it was first introduced. It’s been downhill ever since, though not for the reasons you might think. Back then, Lexus caught the entire luxury car market flat-footed with a product that was better in almost every way and more affordable. Over time, though, the old guard caught up, and new brands entered the segment using Lexus’ own strategy against it. Today, the LS is phenomenally better than the original car was almost 30 years ago, but it no longer stands out as head and shoulders above its opponents.

One area in which Lexus is trying too hard is styling. The big LS is a perfect example of the brand abandoning generations of handsome exterior styling for a cartoonish look that seems ill-matched to the sort of people who buy expensive luxury sedans. The grille, of course, exemplifies this: its square footage is seemingly determined by whatever it takes to earn the title Biggest Grille on Earth.

And yes, I’m going to mention Lexus’ infotainment system. I hate bringing it up every time we review a vehicle from Lexus, but it needs to be said until the brand finally does something about it. My real problem is not with the screen, whether it’s touch-sensitive or not, or even the graphics. My problem is with the input mechanism and how it functions on the screen. Lexus has doggedly stuck with this pseudo-computer mouse interface for years. You’re basically moving an invisible cursor around the screen as it sticks and releases from one button to another. You use a trackpad as your input mechanism, but there’s a terrible disconnect between your finger moving and the cursor selecting what you want that makes navigating the system incredibly frustrating. Just drop it, Lexus, and start over with something entirely new. Please.

All is not lost, though, because LS buyers do get a superlative engine: a twin-turbo 3.5-liter V6 engine producing 416 horsepower and 442 pound-feet of torque. Here’s what’s great about this engine: despite putting out over 400 horsepower, it still gets 30 miles per gallon on the highway. You get the best of both worlds – performance and efficiency – without having to resort to the hybrid. The car’s 10-speed automatic deserves the lions’ share of the credit, as it allows a particularly large range of gear ratios to suit both situations.

Is a great engine enough to overcome the LS’ other shortcomings? That’s up to you. But unlike 1989, there are plenty of other high-caliber, full-size luxury sedans on the market to choose from these days.

In the interest of disclosure, I did not drive an LS 500, but an LS 500h (if you want to hear how much I loathed the hybrid’s clumsy and dimwitted powertrain, give Episode 9 of the Motor1.com podcast a listen). Still, I wanted to chime in and talk about a few of the similarities between the two. And unlike my colleagues, I’m not going to harp on the horrid infotainment system.

My bigger issue is with the cramped front seats and an awkward seating position. At no point during my week with the LS did I ever feel really comfortable behind the wheel. At six-feet, one-inch tall, I’m on the lankier side of average, but I was constantly choosing between my thighs brushing against the steering column or my head touching the headliner. The seat itself was comfortable, but much like the last-generation LS, there isn’t a wide enough range of adjustability on the chair or the power-adjustable steering column.

The rest of the interior, though, isn’t bad. That’s not to say it’s attractive, so much as to say the LS’ cabin certainly stands out from a flock of full-size luxury sedans that, by and large, play it safe from a design and materials standpoint. I like the black-and-chrome strakes that run along the dash – they remind me of Kylo ren’s helmet – and are inarguably interesting. Attractive accents on the door panels and the same real-metal door releases featured on the LC coupe are high points, too. It’s not everyone's cup of tea, but props to Lexus thinking beyond the standard wood trim.

I've been a fan of the Lexus LS’ look since day one. Much like the LC, Lexus did a fantastic job of keeping the original concept's key design elements intact: the sleek, Nike “swoosh"-like headlights; svelte profile; and gargantuan spindle grille most notably. Outside of the LC, the spindle grille works best here in the Lexus lineup.

With the F Sport package, the LS 500 is even more of a looker. A new diamond-shaped grille pattern; larger, more aggressive wheels; and additional darkened trim pieces give the LS 500 F Sport a distinctive look over its less-equipped counterpart. Hell, I'd say this large Lexus sedan looks downright intimidating in the proper spec.

But it's not all good for Lexus's large lad. In terms of infotainment tech, the LS 500 is still a step (or ten) behind the competition. Finally, the company has adopted Apple CarPlay nearly throughout the entirety of its lineup, but there’s still no Android Auto (at least in the LS). The mouse-like input controller makes navigating the outdated 12.3-inch split-screen display difficult. The graphics aren't as crisp or clean as competitors in the class, and its lack of touchscreen functionality is infuriating. At least the LS offers a class-leading 24-inch head-up display.