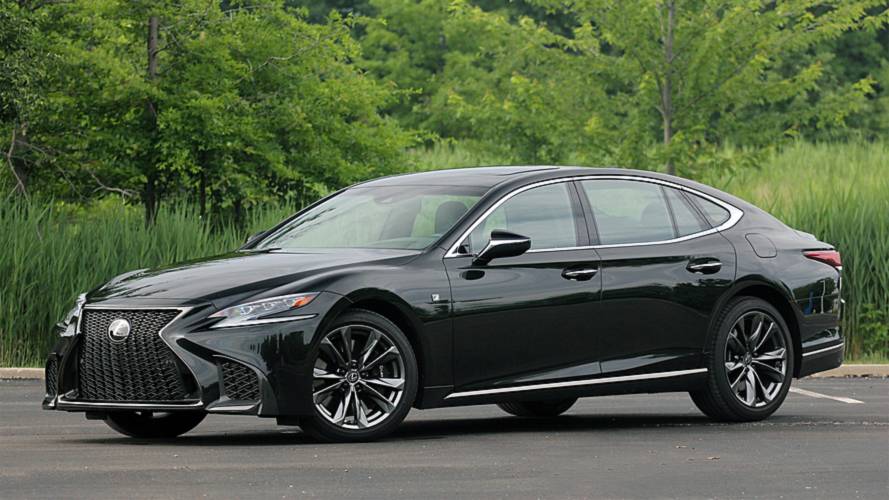 Luxury carmakers are set into a strict hierarchy. There are the Germans at the top, and then brands from every other country – the U.S., Japan, Sweden, etc. – below. It had been that way forever until the Lexus LS came along nearly 30 years ago, which threatened to roust Mercedes-Benz, BMW, and Audi from their perches.

Five generations of the LS have followed, their sole purpose being to compete with the most elite full-size luxury sedans in the world. The latest, represented by this 2018 Lexus LS 500 F Sport, doesn’t manage to upset the order of things the same way the first-generation LS did back in the late ‘80s. Far from it, actually.

The Lexus LS currently occupies a space below its German competition, yet above competitors from Japan and the U.S. The same applies to its price, which starts below the Mercedes-Benz S-Class, BMW 7 Series, and Audi A8, all direct competitors, but above the full-size luxury sedans from Acura, Lincoln, and Cadillac.

Lexus designed the new LS to incorporate all of the brand’s current design language to the Nth degree. The gigantic pinched grille, Nike “Swoosh” headlights, and LFA-style tail lights all make the new LS look overly angry, and the design as a whole seems, to my eyes, far afield from what its traditionally older, more conservative clientele might like. Is it attracting a more youthful customer? Perhaps, but probably at the expense of its current base of loyal buyers. Granted, this is the F Sport with a few extra bits of flair, but all versions of the LS share the same basic look. It earns a high score for originality, but not for overall beauty.

There is one element of the LS 500’s design in particular that hits my eyes like the visual equivalent of nails on a chalkboard: its trio of C-pillars. There’s one for the cut of the rear passenger window so it can go up and down, one for the cut of the rear door itself, and then the actual pillar of the body frame that separates the side windows from the rear window. Look at the same area on any other large sedan and it’s usually designed and engineered with far more elegance than here.

At least the LS 500’s shape serves its purpose as a big sedan. The wheelbase is long, granting lots of legroom, and the roof extends well past where the crowns of rear seat passengers require that height. The trunk, too, can fit a couple sets of golf clubs with room to spare for sailboat parts.

The LS 500 earns higher-than-average scores for its interior design and appointments, but those scores are still a point or two below what we’d give the S-Class, 7 Series, and A8. The design of the dashboard is interesting and there are lots of creative surfaces and materials to explore, but as a whole it doesn’t reach the higher standards of design and construction set by the Germans.

For instance, the digital gauge display behind the steering wheel is rather small. There’s just one digital dial with a pair of smaller displays on either side. On this F Sport model, the central gauge display is actually inspired by the LFA supercar. Its user interface and animations are impressive, but the surface area only gives so much space to convey important information. An Audi A8, meanwhile, offers a huge screen behind the steering wheel on which gauges, maps, and all sorts of relevant info are displayed in a beautifully integrated way.

The LS, though, is a roomy, comfortable sedan with a tomb-like interior. It still does all that well, though again, the Germans do it slightly better. Because this is the F Sport, the aggressively bolstered front sports seats aren’t made so much for comfort as they are for spirited driving, which makes long treks in this version of the LS not as enjoyable as the standard or hybrid versions.

Ouch! That’s a harsh score for such an expensive luxury sedan, but what do you expect when it’s 2018 and your car still doesn’t offer Apple CarPlay and Android Auto. It’s coming, says Lexus, but not soon enough. Also, as is the case for all Lexus vehicles, the LS 500’s infotainment system is crummy. The mouse-like input controller on the center console is a terrible way to operate the system, and its speed and graphics all feel a generation old. This is one area where Lexus needs to find its way, and quickly; its competition, literally every other competitor, is killing it in this regard.

The LS 500 does offer one bit of tech that’s class-leading: a 24-inch head-up display. A solid two-feet long, the HUD expands across the bottom of the windshield like a big screen TV floating in your field of view. Most of it got washed out when I put on a pair of polarized sunglasses, but that’s a common problem with HUDs across the board.

Other than that, though, I was mildly disappointed the LS 500 didn’t offer more unique features that surprised and delighted. Mercedes can pump perfumed scents through its vents, BMW has key fobs with screens, and Audi offers OLED taillights that will put on a light show. Unfortunately, there are none of those fun or forward-thinking features in the LS.

This is the F Sport version of the LS 500, which portends a certain degree of sportiness, but to be honest, it’s mostly skin deep. Lexus says the F Sport model adds things like a specially tuned suspension, larger brakes, and higher-friction brake pads. Those items, combined with more aggressively bolstered sports seats, do make the F Sport feel more athletic than a standard LS. But don’t mistake the F Sport for a performance model on the same level as a Mercedes-AMG, BMW M, or even Audi S car. Those cars are legitimate steps up from their luxury car counterparts in terms of performance. The F Sport, rather, is more like a really well done appearance package.

The F Sport version’s engine is the same twin-turbo 3.5-liter V6 engine used in all LS 500 models. It produces 416 horsepower and 442 pound-feet of torque, which gets routed through the multitude of cogs in the 10-speed automatic transmission. It’s a fine engine with lots of power on tap in any situation, but it’s not an engine with overwhelming force.

As one would expect, the LS 500 offers the full gamut of advanced active and passive safety features, most of which come standard. Blind spot monitors, rear cross-traffic alert, automatic emergency braking, lane keep assist, and adaptive cruise control all come with the cost of admission, while a special Lexus Safety System+ A package is offered for an extra $3,000 that upgrades the cruise control to handle all speeds, includes a front cross-traffic alert system, and tacks on a few other minor upgrades. On the whole, though, it’s not really worth the extra money because the standard safety features are so complete.

Premium fuel is required to power the Lexus LS 500, and it achieves 19 miles per gallon in the city, 30 on the highway, and 23 combined. It’s actually impressive a car this size can reach 30 mpg, though I never hit that during a week of mixed driving. Being an F Sport model, my left foot was a little heavy that week.