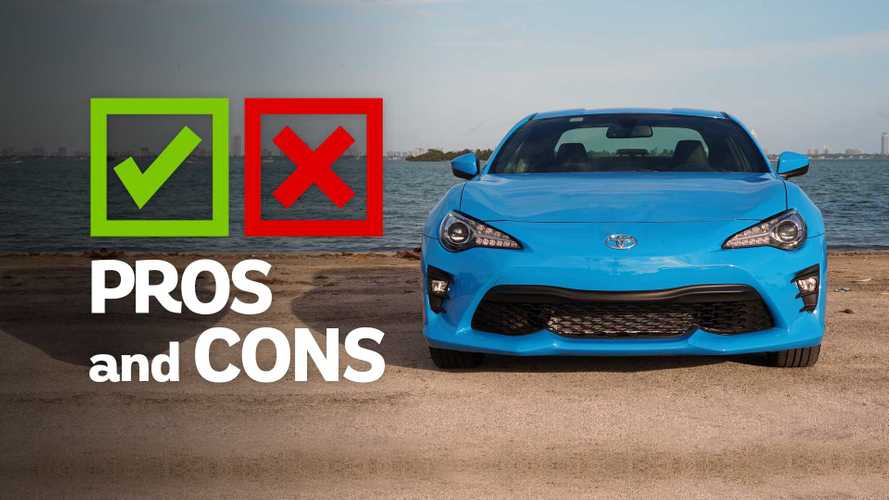 If the TRD Special Edition is the 86 you’re looking to read up on, then click elsewhere, because instead of sending us the latest and greatest variant of its rear-wheel-drive sports coupe, Toyota delivered us a run-of-the-mill 86 GT. Positioned above the $27,225 base model, the $29,355 GT adds comfort and convenience items such as a 4.2-inch gauge cluster display screen, heated front seats, dual-zone automatic climate control, and a proximity key with push-button start. Opting for the GT also nets a rear wing and an underbody panel, both of which lower the coefficient of drag for the 86 from 0.29 to 0.27. Although the 86 is far from perfect, there’s still a lot to like about this little Toyota.

The 86’s predictable and communicative chassis is arguably this two-door sports coupe’s most redeeming quality. Factor in quick and tactile steering, fluid throttle responses, and forgiving Michelin Primacy HP tires, and the rear-wheel-drive 86 is one of the most engaging vehicles available today. It’s also one of the easiest to throw into a controlled drift.

The 86 is far more adept at carrying cargo than its shape suggests. With 6.9 cubic feet of space, the trunk of the 86 offers an extra 2.3 cubic feet of space relative to the Mazda Miata, the Toyota sports car’s closest competitor. Thanks to its coupe body style, the 86 also sports a small two-person rear bench that’s good for carrying small children or additional cargo. A folding seatback allows longer items to come along for the ride, as well.

Say what you will about the details, but the proportions of the 86 are fantastic. With its arching roofline, low hood, and blistered fenders, the 86 looks like a proper sports coupe. That said, we could do without the car’s tacky fender vents and the GT model’s gaudy rear wing, even if it does assist in lowering the car’s coefficient of drag.

While the 86’s trunk and folding back seat prove adequate for hauling larger items, the sports car’s limited interior storage areas makes it difficult to hide handheld accessories from prying eyes. A shallow and open center console with removable cupholders serves as the 86’s most prominent interior cubby. It’s complemented by small door pockets and an even smaller space ahead of the shift lever, neither of which include covers. In fact, the only notable interior cubby with a cover is the glove box – an area not typically used for storing cell phones, loose change, and the like.

With little low-end torque (all 156 pound-feet of torque is available at 6,400 rpm), the 2.0-liter flat-four engine of the 86 requires constant thrashing to make the most of its 205 horsepower (which peak at a sky-high 7,000 rpm). Although the standard six-speed manual transmission is satisfying to row, the powerplant’s grainy groan and lethargy to run to redline tend to overshadow the gearbox’s precise actions and reasonably short throws. A six-speed automatic is a $720 option, but the self-shifting transmission nets just 200 horses and 151 lb-ft of torque from the horizontally opposed four-cylinder engine.