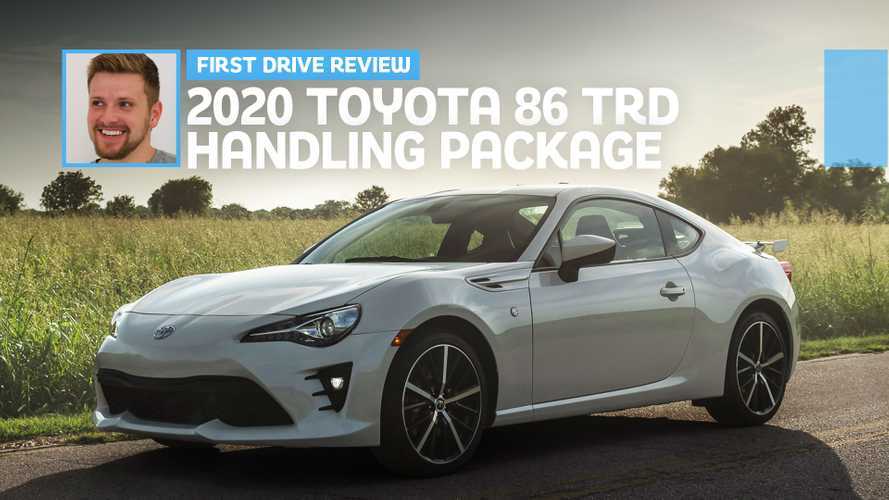 Update: This story has been updated with pricing information.

If there's one thing people criticize the Toyota 86 for, it's power. Or, lack thereof. In nearly a decade (counting the Scion FR-S), this sports coupe has bumped its numbers from a measly 200 horsepower to a hearty – wait for it – 205 horsepower. Bugatti beware.

But while we hear you loud and clear, Internet, we're actually not in the camp that believes this car needs more power. Two hundred horses has always felt like enough. The only thing we've longed for is more grip. It arrives, atop the 2020 Toyota 86 in the form of the TRD Handling package, arguably the best iteration of the 86 sports car to date.

Think of last year's limited Toyota 86 TRD as a taste test. The 86 TRD Handling package, new for 2020, borrows the outgoing TRD model's performance components: Sachs dampers, Brembo brakes, and Michelin Pilot Sport 4 tires included. The only thing it lacks is the TRD's visual flair; there are no TRD graphics or a special body kit like the last one (whether this is a pro or con is up to the consumer).

Every version of the 2020 Toyota 86 also gets an upgrade inside. The TRD Handling package, even in just a short test, gives us our first introduction to the much-improved infotainment system. The 7.0-inch central screen displays much better graphics and now supports Apple CarPlay and Android Auto, like many of its siblings. We'll have to fiddle around with it more, though, as most of our time in the 86 was limited to the track.

Our go in the 2020 Toyota 86 with the TRD Handling package was admittedly short. We'll do a more in-depth test of the car in the near future. But in just a handful of laps on the twisty infield course at Texas Motor Speedway, this car showed major improvements over its less-sticky base sibling. Nearly all of those gains come in the handling department, as its new moniker denotes.

Much like its Camry TRD and Avalon TRD siblings, power output on the TRD-ified 86 stays put. The same 2.0-liter Boxer four-cylinder from the base model, producing 205 horsepower and 156 pound-feet, of torque carries over, as does the six-speed manual gearbox. A six-speed automatic isn't an option with the TRD Handling package, and drops power and torque to 200 hp and 151 lb-ft in the base model, anyway.

But again, power isn't a problem. Manually rowing gears via the snappy six-speed manual gearbox and revving the hell out of the car in second gear is fun enough. Even with its more powerful Supra sibling running up our 86 tester's backside on the track, we only want for more oomph briefly. The thought passes, as does the Supra, and the first corner in the 86 reminds us why 205 horses are plenty.

The TRD-modified Toyota 86’s impressive agility is what cements it in our mind as the best of the breed.

The TRD-modified Toyota 86’s impressive agility is what cements it in our mind as the best of the breed. This car cuts and corners like an NFL-caliber running back. The tiny amount of body roll in the non-TRD model disappears entirely here thanks to the aforementioned Sachs dampers. Unexpected body movement is a thing of the past.

The wider, stickier Michelin Pilot Sport 4 tires give the 86 gobs of grip. The meatier rubber is a huge improvement over the stock all-seasons on, which let loose more easily. Paired to the 86's exceptionally weighted stock steering, we’re able to pitch the Handling package into turns with even more precision. If there's a car that corners as flatly, we haven't driven it. Not even the Supra feels this tight.

Complaints? There aren't many. The clutch has a tiny catch point, which leaves little room for error. Without excellent heel-toe skills or built-in rev-matching, the 86 can get a bit squirrely when attempting to downshift quickly in a tighter corner. And we'd appreciate some new visual cues. The red TRD badge out back is the only thing distinguishing the Handling package from the standard model.

Otherwise, this is a damn-near flawless driver’s car in every respect.