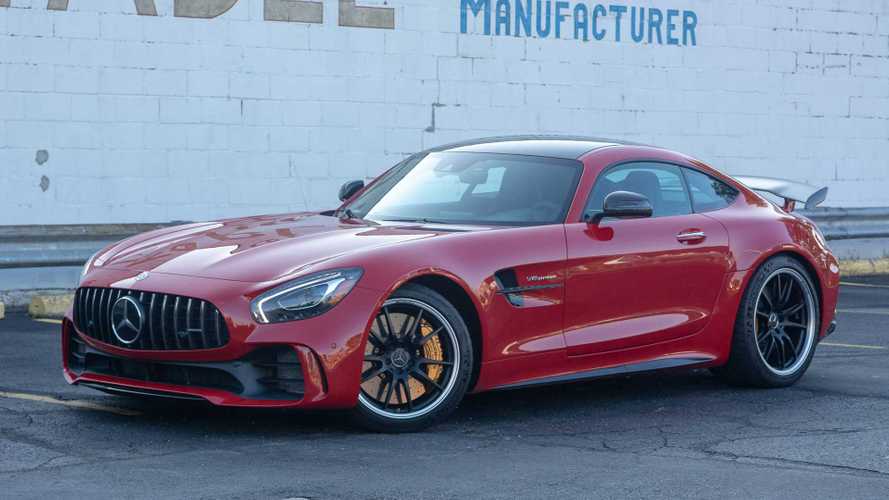 V8 power and villainous looks are a fine recipe for a 911 challenger.

For decades, if you wanted a German sports car, conventional wisdom said you should just go and buy yourself a Porsche 911. And Porsche makes it easy. There's at least 286 distinct trim and power levels, three different body styles, and an options catalog so vast ambitious owners can nearly double the starting price of most of the 911 line by simply checking boxes. And that starting price? The delta between the most affordable 911 ($91,100) and the most expensive ($293,200) covers the entire price of a base, two-wheel-drive Carrera. Twice. With $20,000 left over. The 911 is and always has been a smart purchase because there's one for virtually any budget.

Why, then, would you buy anything else?

Well, because the Mercedes-AMG GT exists, and as delightful as Porsche's flat-sixes sound, there's just something about a V8 and extreme styling. If you want the cream of the GT crop, you'll have to go with the GT R. While it borrows its name from a certain Godzilla-like vehicle from Japan, the German GT R paves its own way with a righteous engine, ample horsepower, and a distinct emotional pull that would make the average 911 owner furrow their brow. It's an absolute hoot.

With prices starting at $157,000, the AMG GT R is not an affordable vehicle by any stretch. But as 577-horsepower track-focused coupes go, the GT R's starting price and our test car's $187,345 configuration are… okay, it's not cheap.

But the Mercedes earns kudos for its pricing because almost all of its optional extras aren't really necessary. For example, you can spend more than $9,000 on carbon-fiber trim or $4,500 on an upgraded Burmester audio system. There's a $1,600 Convenience Package that adds push-button start and heated side-view mirrors. Adaptive cruise control is a $2,250 option, and there's a host of premium paints and upholsteries. Skip them all. The only thing we'd really advocate spending extra on – particularly if you plan on regularly visiting the track – are the $8,950 carbon-ceramic brakes, which offer impressive, fade-free stopping power and a beautiful set of gold calipers.

The GT R does acquit itself well against the aforementioned 911, though. Straddling the capabilities of the 911 Turbo and GT3, the Mercedes lands squarely in between their $161,800 and $143,600 starting prices. There are also vehicles that offer similar performance sans the premium pedigree. Nissan sells three separate trim levels of its GT-R for prices ranging from $99,990 to $128,490 (and a fourth, the GT-R Nismo, which, at $175,490, blows the AMG GT R's starting price out of the water). And a heavily optioned Chevrolet Corvette Z06 is available for around $100,000.

From its cartoonishly long hood to its massive grille and fastback shape, it's hard to argue that the AMG GT R is anything but original. The familial ties to the rest of the Mercedes-Benz range are there, but the GT R exaggerates them, like a predator putting on a threat display.

But is it attractive? That's a tougher question to answer. At the very least, the GT R is striking and purposeful. Despite its occasionally over-the-top design decisions (that hilariously long hood and the elaborate side strakes being the most notable), there's the sense that Mercedes made every design decision with an eye toward performance. Take the greenhouse, for example. It's tight, compact, and ends not long after the windshield sprouts from the hood. It's an aerodynamic look on its own, but it also serves to channel air to that hefty, adjustable rear wing. The wide, flat front-end, meanwhile, wears its gaping grille proudly. The GT R's form clearly follows its function as a high-performance coupe.

That doesn't answer the question we originally posed, though. To be honest, it's tough to call the GT R pretty, especially in a shade of paint as garish as Mars Red. But this feels like a case where the color is doing a disservice to the rest of the car. In its AMG Green Hell Mango launch shade or perhaps Brilliant Blue Metallic, though, the GT R is a far more fetching design. We're giving this one high marks, just so long as you order the right paint.

As indicated above, the cabin of the GT R is not spacious. Frankly, fitting in here with a helmet on would be a challenge. And, even if you could get in the door with a brain bucket on, there are questionable design decisions. The shifter sits along the car's midline, but rests near the driver's elbow, requiring an awkward motion to shift from Reverse to Drive. The twin rows of buttons on each side of the center console are informative enough, but we were happy that the new AMG GT 4-Door adopted a more intuitive interface – a pair of steering-wheel-mounted controls – without ditching these buttons entirely.

But those miscues aside, the rest of the cabin is heavenly. The seating position is pure performance, with a hugely supportive AMG Sport seat available as standard (unlike in other Mercedes models). There's enough adjustment on the tilting and telescoping steering wheel to make life manageable for both long-legged or short-armed drivers. Said steering wheel feels particularly appropriate to the GT’s R version, featuring a flat-bottom design with an Alcantara wrap and a leather hash at the 12-o'clock position. The paddle shifters are fixed to the wheel but are solid metal and have a perfect action.

Material quality is precisely what we'd expect of a six-figure Mercedes product. The leather, Alcantara, and carbon-fiber trim all feel top notch, and there are plenty of bits of real aluminum throughout the cabin. Moreover, there's an enduring sense of solidity to things like the door panels, dash, and center console. This cabin feels like it will last ages.

That said, noise, vibration, and harshness in the GT R isn't great. That shouldn't be a surprise for a low-slung sports car with fat tires and a big V8 in the nose. Despite its name, the GT R is by no means a grand tourer – it's a track vehicle and beats its drivers up accordingly. There's plenty of road noise, and impacts from the firm suspension resonate in the cabin more than some rivals. But this is a performance coupe, and an unabashed one at that. If you're concerned about the GT R's noisy ride or occasionally harshness, the lesser AMG GT models aren't nearly as uncompromising.

To be clear, nothing in the GT R's tech suite is qualitatively bad, so much as it's cursed with old age. Mercedes-Benz’s new MBUX infotainment system is far smarter, more attractive, and more intuitive than the old knob-controlled version of COMAND featured here. It's the age of this system that costs the GT R points for its lack of new or innovative features. We handed out a few points for the neat, dash-mounted traction control dial, but there's not a lot to write home about otherwise. Apple CarPlay and Android Auto are not available in the AMG GT R.

Good gracious, the GT R is a fantastic performer and it all starts with the engine. This is yet another member of Mercedes-AMG's twin-turbocharged 4.0-liter V8 family, and in the R it pumps out a hefty 577 horsepower and 516 pound-feet of torque. That means effortless, ferocious acceleration. The GT R can hit 60 miles per hour in just 3.5 seconds, and unlike faster, more powerful competitors, such as the Chevrolet Corvette Z06, it's easy to manage. There's no question that the GT R's massive rear tires can put down every ounce of power, so getting up to speed is merely a matter of smashing the responsive, linear throttle.

This force-induction engine still doesn't sound as nice as the old naturally aspirated 6.2-liter from the SLS AMG, but it's getting better. Set the exhaust to its noisiest setting and the GT R roars in a straight line, pops and crackles on overrun, and barks with each upshift. This is a very loud, flavorful exhaust, but it lacks the all-encompassing substance of the old M156.

The 4.0-liter works alongside a seven-speed dual-clutch transmission. The so-called AMG Speedshift gearbox is deserving of its name, serving up rapid shifts in its more aggressive settings. And it's laid back settings. And pretty much every time it changes gears. This is a remarkably quick, poised, and intelligent transmission. That last part is worth keeping in mind; there's really no need to take matters into your own hands, because the GT R always seems to be in the right gear at the right time.

The brakes, with rotors the size of manhole covers and calipers that got a little too much attention from King Midas, are relentless in their ability to slow the GT R down. The stopping power is shotgun-like, but the pedal isn't grabby, and there's plenty of feedback well before the ABS starts kicking in. As for the carbon-ceramic squeakiness we've come to expect, the GT R is on the better end of things, only really making noise when the rotors are cold.

Shod in Michelin Pilot Sport Cup 2 tires with staggered offsets (19s in front and 20s in back), there's far more grip available than any driver would need on public roads. Alongside the standard adaptive suspension, the AMG GT R promises extremely sharp handling. There's next-to-no body roll, squat, or dive, while turn-in from the steering is sharp but predictable. At the same time, the GT R manages road imperfections well – it's noisy, but hitting a pothole doesn't send the Mercedes skittering into another lane. High-speed stability is, as we've come to expect from high-performance Germans developed with the Autobahn in mind, excellent.

Well, there are airbags. And crash structures. And really, that's it. The AMG GT R is decidedly light on active safety systems.

As mentioned, adaptive cruise control is available as an optional extra, while blind-spot monitoring and lane-keeping assist are packaged together. Our test vehicle had adaptive cruise, but was missing the more affordable safety package.

Beyond those optional goodies, each GT R comes standard with forward-collision warning with automatic emergency braking that protects both car and driver at speeds up to 65 miles per hour, and a driver attention monitoring system to stave off drowsy driving.

With two turbochargers, eight cylinders, and 577 hp, the AMG GT R puts about as much emphasis on efficiency as Germans do on teetotaling. The range-topping member of the AMG GT family returns an EPA-rated 15 miles per gallon city, 20 highway, and 17 combined. Premium fuel is required.