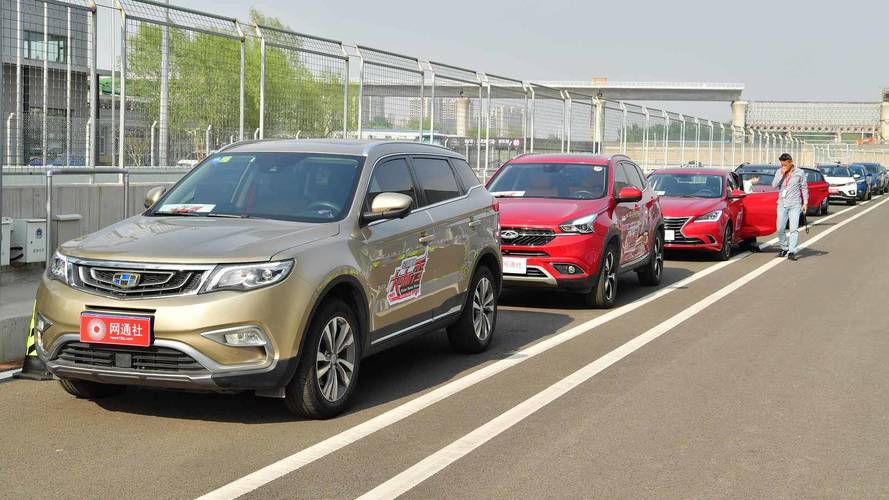 We head to Beijing to sample CDM delights from Geely, Wuling, Qoros, and more.

Last year my friends at the Internet Info Agency in China – no, I could not make that name up – invited me to Guangzhou to drive some Chinese Domestic Market cars. It was a blast, and really eye opening for someone who – like many of you – have heard that "Chinese cars are coming…" for the better part of the last decade.

I received another invitation around the occasion of the Beijing Motor Show, with even more cars on offer, and, better still, a vastly improved facility for testing them.

Our venue this time was the Beijing Kaize Automobile Sports Experience Center. Beijing Kaize Automobile Sports Experience Center. That’s a mouthful for sure, but it’s a nice, bitesized track about 20 miles outside of Beijing. Roughly 1.5 miles long, and with the modest straight bits transformed by unfortunate cone slaloms, it would be a fair place to test low- to mid-powered sports cars.

Of course the rides provided for me were far from sporty. Instead it was a representation of some of the new and improved models on the Chinese market – mostly SUVs. Driving vehicles for the mass-market (and in some cases aimed at the very cheapest end of the market) on a circuit is a little silly. Still, it really called out which of the group was as well sorted as a car I’d expect here in the U.S., and which were significantly less refined. It was a fun day.

Below, you’ll find capsule reviews of the Qoros, Geely, SAIC, Wuling, and Chana vehicles that I tested (there were more, but only time to take notes on so many in a few hours of driving). While not complete First Drives, I hope they provide a peek into the biggest car market on the planet.

And while I’ve faithfully reported the price and specifications of each vehicle as best I could, please take those numbers with a grain of salt. The prices are conversions from Chinese Yuan, of course, and not what the cars would necessarily go for in other markets. The other figures were provided on basic info sheets for each vehicle, though weren’t always backed up by information I gleaned from my driving instructors during the test day.

As is the case with many of the test cars I drove at home, the higher dollar Chinese vehicles seem, as a general rule, to be far better to drive than their budget counterparts. Shocking, right?

So, while the compact Qoros 5 front-drive SUV was amongst the most expensive vehicles I drove at Kaize, it was also clearly the closest to something I could imagine on sale here in the States. At the equivalent of about $30,000 as-tested, the 5 would compete in the near-luxury class in China, I’m told.

The turbocharged 1.6-liter four-cylinder couldn’t quite make the Qoros feel quick, but power delivery was smooth and satisfying thanks to probably the best-tuned six-speed automatic transmission I sampled on the day. Whereas most of the CDM autos seem programmed to get into as high a gear as possible, as quickly as possible, and stay there, this 6AT was more willing to kick down when I asked.

And around the most challenging parts of the track, the sport-tuned suspension, slightly more aggressive tires, and overall nimble dynamics of the Qoros shone through. Perhaps I was influenced by the fact that the cabin felt very Volkswagen-inspired, but the 5 had a resemblance to something like a last-generation Tiguan in the way it went down the road. High praise, considering how sloppy some of the other SUVs I drove really were.

From a styling standpoint, the exterior borrows a little from the Porsche Cayenne at the back, from the Range Rover Evoque at the front, and has a face that, to me, looks like nothing else so much as the last Saturn Vue you ever saw. It’s derivative, but not offensively so. Still, sales in the U.S. or Europe would probably require a facelift for the sake of differentiation.

This compact sedan offered up one of the tidiest laps around Kaize I had all day (bear in mind this one also just one of two non-SUVs I drove all day). As a matter of fact, compared with the softly sprung utility vehicles, it felt downright sporting.

I didn’t confuse that dynamic excellence in context with outright ability, however. I’ve never had the pleasure of driving the last generation Toyota Corolla around a race track, but that’s the closest analog I could come up with after a few rounds with the Eado. The suspension was soft but not utterly hopeless in the fast slalom exercise; the steering overboosted and pretty numb, but quick enough to let one play just a little.

Design-wise the Eado is typical of most other CDM cars: pretty conservative and derivative of existing cars. It’s hard for me to look at the car’s grille and see anything but a cut-down Lexus, for instance, though the profile is still tidy and pretty unremarkable.

Inside, you could be convinced you’re in a fairly high-specification Japanese or Korean compact… if you go by the photos alone. The flat-bottom steering wheel, ample chrome, and big glossy infotainment screen get the palate and the shape right, at least. But closer inspection, especially to the quality of the wood-like trim on the center console and panel fit just about everywhere, shows a lower level of attention to detail than we Americans expect from cars in this class.

Sold in the U.S., the Eado would likely be competing alongside the most inexpensive Mitsubishis and Nissans, and still have to come in at a bargain price to start winning market share. Still, I can see the path forward in this car.

With the exception of the far more expensive Qoros 5, this compact SUV was the best-driving, best-screwed-together example of the day. Geely, of course, is quite an international outfit these days, and the owner of Volvo and Lotus just to name a few. Clearly the Boyue has benefitted from the cosmopolitan nature of the parent company.

Exterior styling is basically anonymous save for the signature – and cool – grille made form concentric pentagons. With the deep character line and floating roof, this could be a Nissan or a Hyundai with just a bit of a eye squint.

The interior is the equal of the exterior in terms of originality: not a lot. This cabin is really just a haven for brushed-metal-effect plastics, and black buttons and knobs. (The aftermarket steering wheel cover did add an element of local flair, however.) Again, this feels a rung below a value-play SUV like the Mitsubishi Outlander Sport here in the U.S.

But solid work has been done in terms of the powertrain and chassis tuning by the Geely team. The turbocharged four-cylinder felt reasonably torquey as I accelerated onto the straight parts of the little circuit. And though the six-speed automatic transmission wasn’t in a huge hurry to kick down, it wasn’t the very laziest auto-box of the day. Most impressively though, aggressive sawing of the steering wheel netted a pretty firm suspension under load, and the tiller itself had some heft, and decently quick response.

This big, narrow, low-powered SUV from Wuling is proof, should you need it, that the Chinese market has entirely different segments that we do in the U.S. Where does a three-row, midsize, 110-horsepower, manual transmission, $9,000-SUV fit in over here? It doesn’t.

With that said, I’m sure there are a ton of budget-conscious buyers on our shores that might appreciate a low-cost utility vehicle of this size. Well, at least the size of its three-row interior, with thin seats and lots of headroom. From the outside the dimensions are weird: consider that it’s the length of a Honda CR-V, as tall as a Jeep Grand Cherokee, but only slightly wider than a Honda Fit.

Materials aren’t weird, so much as rough. The whole cabin smells of cheap plastics and, of course, just a hint of leftover cigarette smoke. Wuling has made its name in China in the van market, which shows in this SUV, but frankly at this price I’d say the quality is acceptable.

Driving dynamics are as dodgy as the specs would indicated. There is no call for this car to be on a race track, for sure, unless perhaps it’s shuttling drivers or crew to and from the pits before the race. Just a hint of lock will induce the S3 into a wild lean, and attempting to drive the cone slalom with any pace at all should only be done by someone with a stout stomach.

I couldn’t help but be charmed by the powertrain, however. Ok, ok, there’s no “power” here to speak of; with just 110 horsepower from 1.4 naturally aspirated liters, acceleration is more of a vague idea than something you’d try to measure. But hey, listening to that little mill rev its guts out in second gear was worth the price of admission – and my coach and I both laughed our asses off as I pushed the skinny tires within an inch of their hard, bitter lives.

The Maxus D90 held the most superlatives of any vehicle in my test group: biggest, most powerful, most wheels driven, and most expensive. With a modern-feeling 2.0T under its hood and an as-tested price north of $40,000 (at least in RMB conversion), you’d expect the D90 to feel the most like a car I recognize from home, too.

The truth of the Maxus, though, is that it feels like a very CDM version of a big luxury truck. The interior is leather clad and, with quilted stitching and cushiony seats, feels like a cowboy-ed up version of some other-world Audi.

That’s not how it drives, however. The S90 may have full-time all-wheel drive but it drives a lot like an old-school body-on-frame SUV (which it is not). Push the pedal to the floor and the D90 leans back on its rear wheels; stop with any kind of force and it dives forward on its soft front suspension. Don’t get me wrong, it’s nowhere near as terrifying mid-corner as the Wuling, but it’s far from a three-row track weapon.

In a way, I’m saving the best for last here. The Geely X1 might be super cheap (its starting price the equivalent of just about six grand), and have very little power (just 87 hp from 1.3 liters), but it’s cheerful as all hell.

Even with an antiquated four-speed automatic transmission, the Geely felt perky on the track, doing the whole “driving a slow car fast” thing in a way that reminded me of learning to hoon as a kid in the 1990s.

Geely calls the X1 an SUV, which is patently absurd. The car sits low, on tiny wheels and tires, and couldn’t be more of a hatchback if it tried, despite the black plastic cladding over its cherubic wheel wells. Even with a very softly sprung setup (notice a pattern here?), the small wheelbase and quick steering make chucking the Geely pretty joyous.

This is meant to be a commuter car – and “good for girls” if I am to believe the many, rather un-woke driving instructors’ opinions – and it’s tinny and rather loud, and I wouldn’t want to be stuck in Beijing traffic with it for too long. With that said, I think it’s an honest city car, and fairly charming despite its humble aspirations.