Six Chinese Market vehicles on a test track prove that a few up and comers could be in Europe, or America, sooner rather than later.

Eventually, if I keep this gig writing about cars long enough, I’ll get really used to traveling to China to drive cars. That much I’m sure of.

But this morning, as our smoking diesel bus creaks out the turn from a narrow concrete lane running beneath a highway overpass, to a narrower still muddy road that tracks some kind of slow-moving waterway, I’ll admit to feeling a world away from a typical driving event.

The world I’m entering is at once both weird and familiar. My bus stops at a small, tightly wound, and almost flat circuit called Haoting Fugang Race Track. Just under a mile in length, the little track is, in many ways, not unlike small local venues you’ll find dotting the U.S. And yet, the complete lack of runoff or safety barrier, and the surroundings of duck farms in fragrant ponds, remind me that I’m certainly not in Kansas.

Innuendo of terrible build quality and sloppy dynamics has been rife, ever since Chinese makers started putting cars on the road; but I came here after reality, and honest driving impressions.

That reminder is hammered home by six distinctly un-track-suitable vehicles staged at the start-finish line, under a big promotional banner. Sure, there’s an E-Class that looks more or less as I’d expect, and the familiar face (at least) of a small BMW sedan, but the remaining quartet of Chinese-maker vehicles are completely new to me.

And frankly, those four are the reason I’m here. I was invited to China to attend the Guangzhou Auto Show, but the real reason for my saying yes to five days of mostly traveling, was the cars here at Haoting Fugang. For years, as the Chinese automotive market has exploded, I’ve been dying to answer for myself, and for the American public, the question of just what the cars over here are like to drive. Innuendo of terrible build quality and sloppy dynamics has been rife, ever since Chinese makers started putting cars on the road; but I came here after reality, and honest driving impressions.

Allow me just a few notes of disclaimer before you read said impressions, however. Remember that all driving was done on a very short, flat, and unoccupied track, or around a “handling course” (basically driving around cones on a big section of tarmac). Slightly less than ideal, considering the main vehicles of interest were midsize crossovers and a minivan. What’s more, I had zero technical information available about all of the test cars. Official information about each of the models is sketchy, too, so what’s provided below is labeled as estimated when hard facts/figures weren’t available. 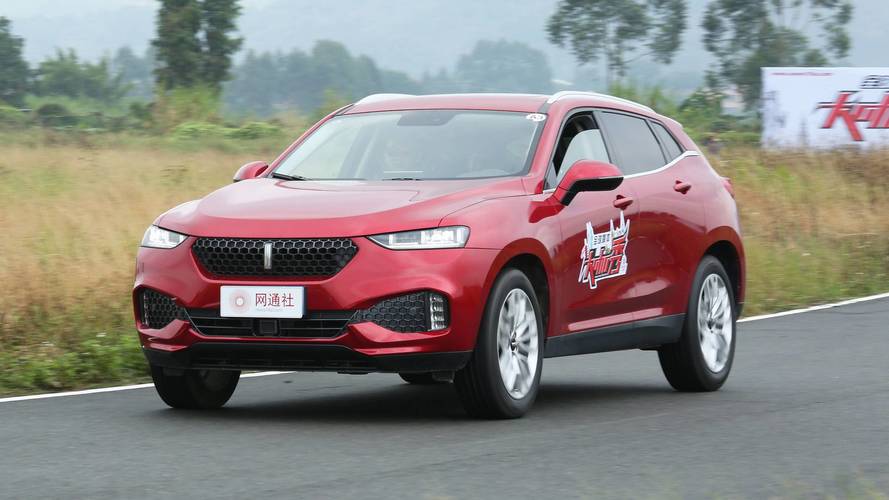 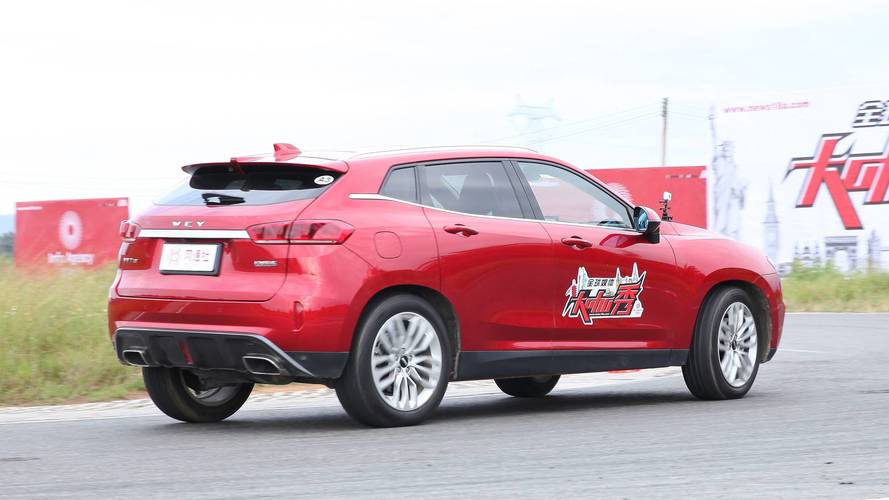 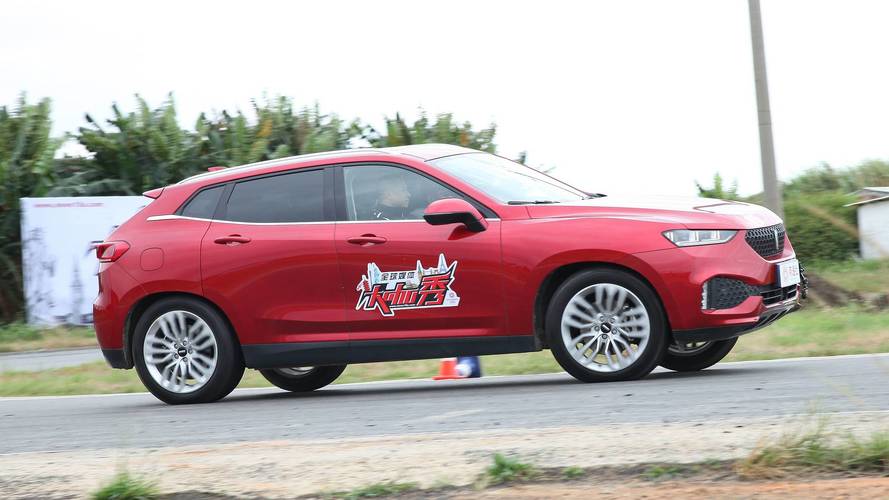 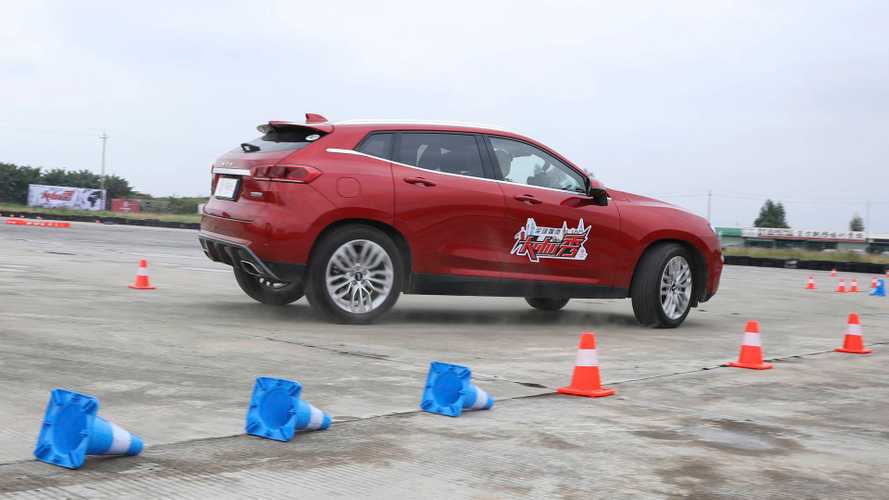 After a fascinating conversation with the company CEO, the vehicle I’m most excited to pilot is the Wey VV7. Wey is the infant luxury division of parent company Great Wall, currently the purveyor of two front-wheel-drive, SUV-bodied models (no one in China likes the term “crossover”), and owner of the most credible product for the U.S. and/or Europe, so far.

From the curbside vantage point, I find the VV7 pretty modern looking, and attractive. You will doubtlessly be tempted to play “spot the styling influence” – I’ve heard everything from Mazda CX-7 to Maserati Levante – but I’d argue the same can be said for most new vehicles of this kind, from any automaker.

Functionally, at least, the rakish rear end of the Wey is suboptimal as it leaves a tiny rear window out of which to see, and contributes to the high beltline and below average side visibility, too.

Still, this five-seat vehicle seems to have comparable room to similarly sized vehicles I’m used to back home (roughly like a Ford Edge or Toyota Highlander). I have no trouble finding a comfortable seating position behind the wheel – despite being very tall – and there’s enough room for two normal sized adults in the rear. Three across back here would be a stretch. 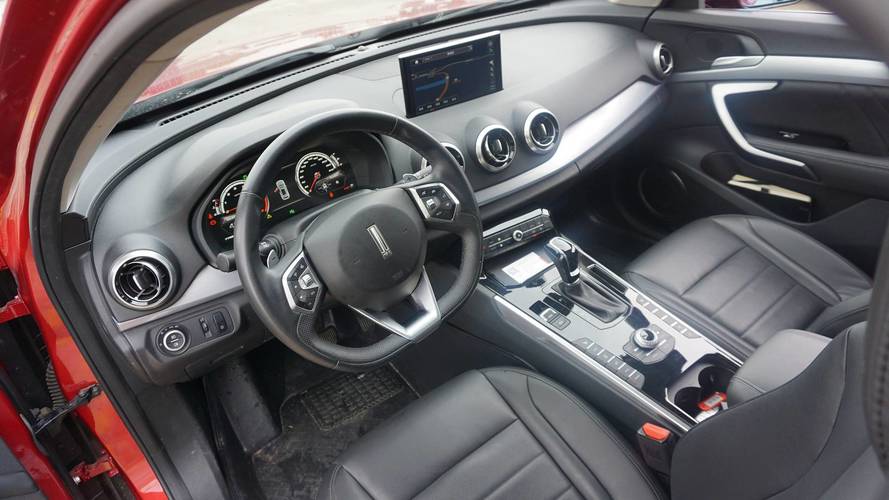 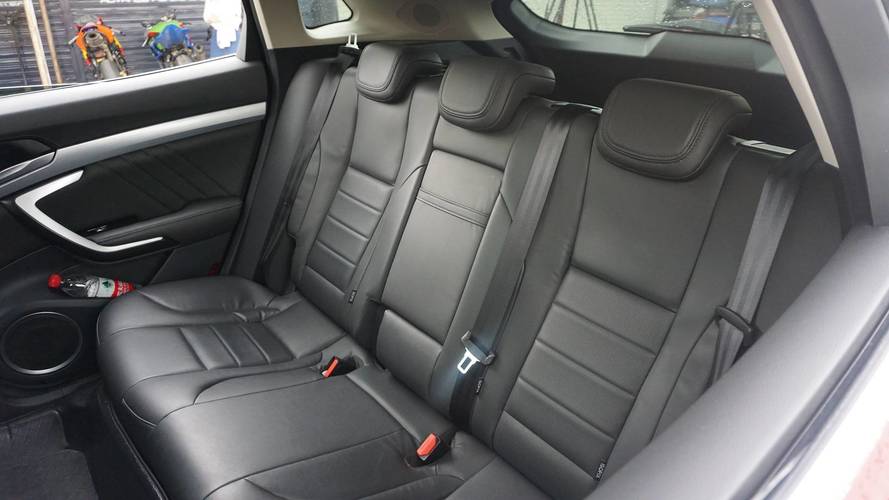 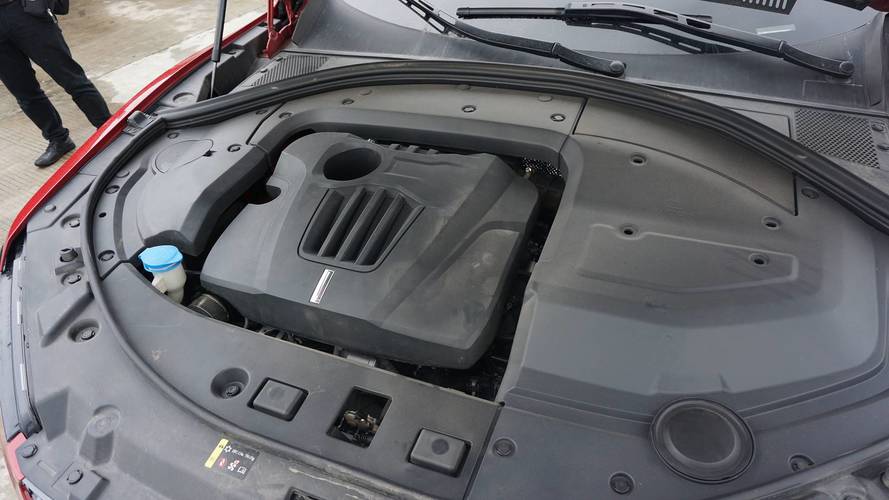 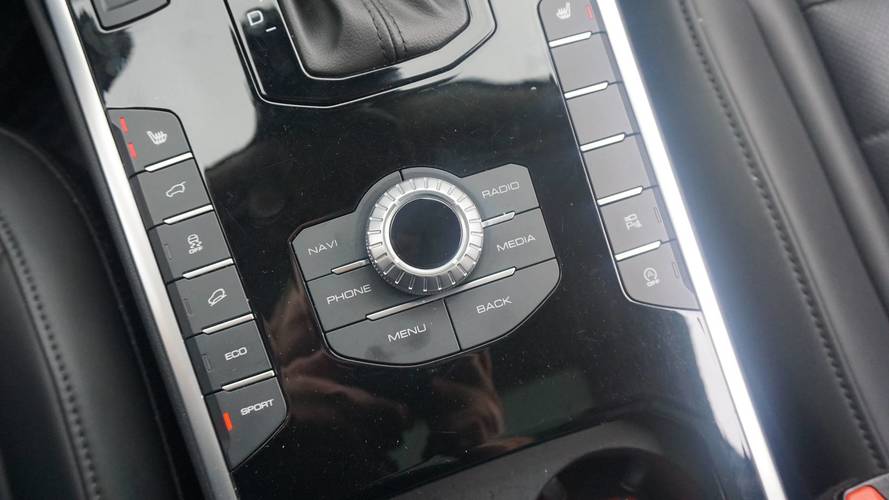 I don’t find a lot offensive about the interior materials or equipment, but compared to say, the new Mazda CX-9 or a Volkswagen Atlas, it feels a generation or so behind.

Keep that Ford Edge in mind in terms of interior fit and finish, too. Wey will compete in the luxury market here in China, but if this vehicle were brought directly to North America or Europe, it would feel more like a lower-tier mainstream offering. That is to say, I don’t find a lot offensive about the interior materials or equipment, but compared to say, the new Mazda CX-9 or a Volkswagen Atlas, it feels a generation or so behind.

On the track, it’s a different story. First, the good news: The engine feels very like what I’d expect from a new midsize SUV offering in the States. Though exact figures are hard to come by, the turbocharged 2.0-liter four is said to be making 234 horsepower and 265 pound-feet of torque – both numbers that feel pretty accurate based on my short driving experience. With that said, the gear of the seven-speed DCT is… strange. First and second gear feel far taller than I’d ever expect or hope for, making for sluggish off-the-line acceleration, even when I try to shift manually. This must be something of a Chinese-market preference, as the Borgward BX7 and the Baojun 730 you’ll soon read about, suffer the same malady.

I really can’t speak to ride quality – the roughest road I have to test on is the low curbing of the track, but pushing the VV7 through corners reveals a soft suspension setup with loads of body movement. Again, I might be experiencing CDM-specific tuning here – all of the vehicles at the track have a soft-riding setup – but this is far-removed from the European and American automaker trend of tuning for a real balance of ride quality with still-sprightly handling.

In short, I see the bones of a vehicle that might appeal to western car buyers eventually. Modifying things like suspension, traction control, or transmission tune is, frankly, small potatoes. Still the devil is in the details, and it’ll be those details that make or break a vehicle like this Wey VV7, if and when it makes it out of China. 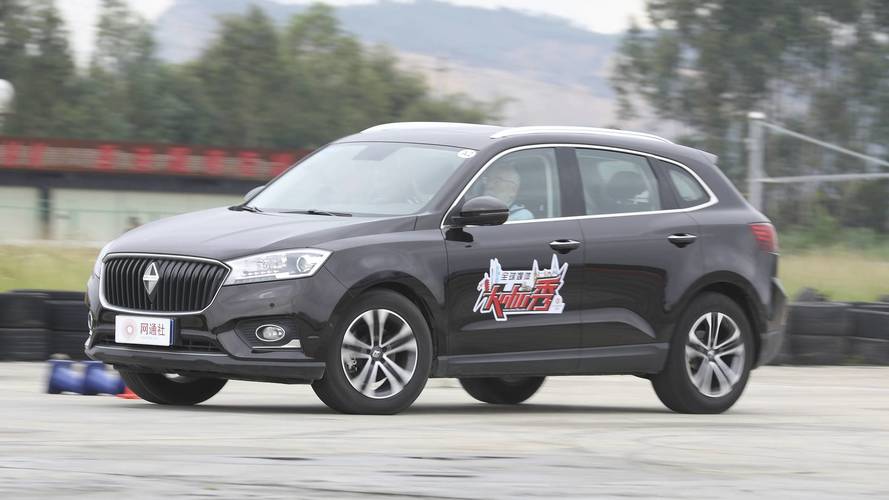 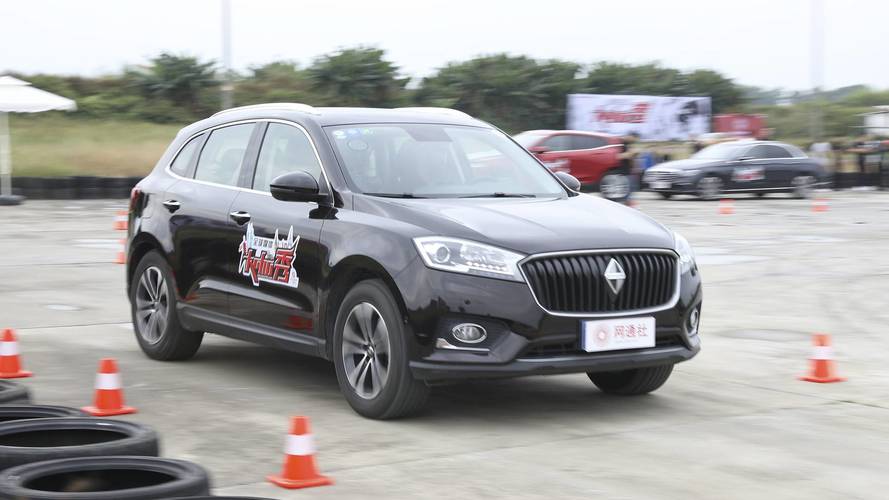 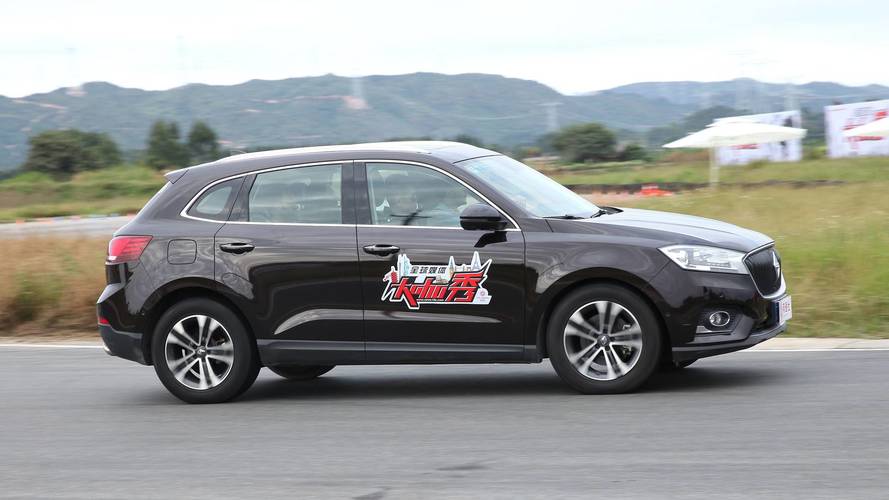 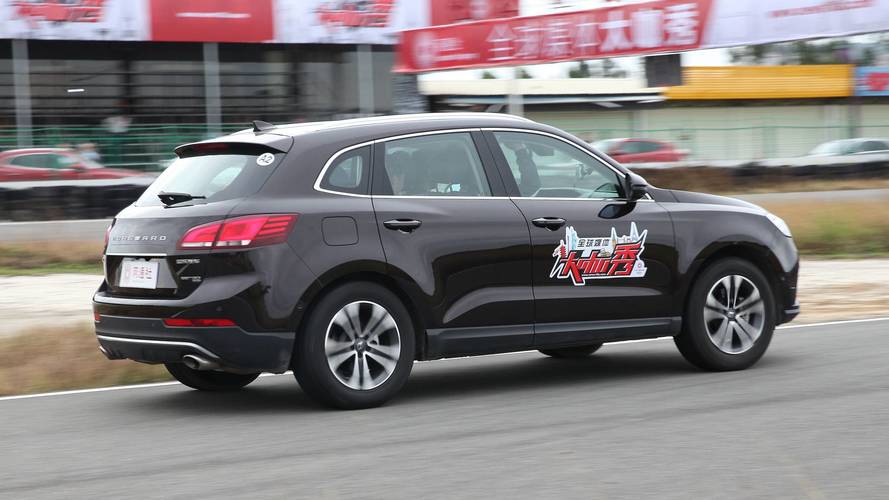 For those of you without a history book handy – or a family member interested in collecting antique cars – the German brand Borgward may sound all new. Suffice it to say that the company, which is a scant year old in its current form, with designs on moving quickly from the Chinese market to Europe, is leaning hard on the fact that its originator was founded in the 1920s. History and lineage mean a lot to the Chinese consumer.

The BX7 is a direct competitor to the Wey VV7 in China – a midsize SUV positioned in the country’s luxury tier. Size- and price-wise, the Borgward is practically in lockstep as well, though you’ll see a small price premium for the all-wheel-drive layout not currently offered by Wey. 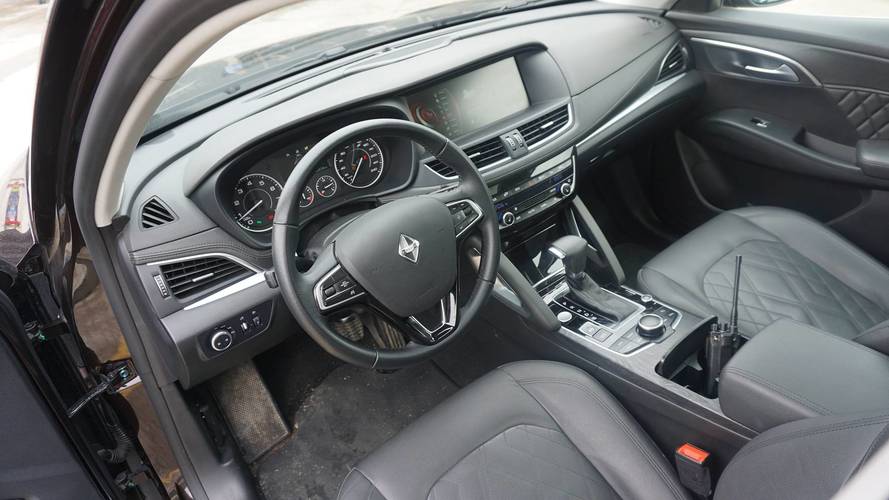 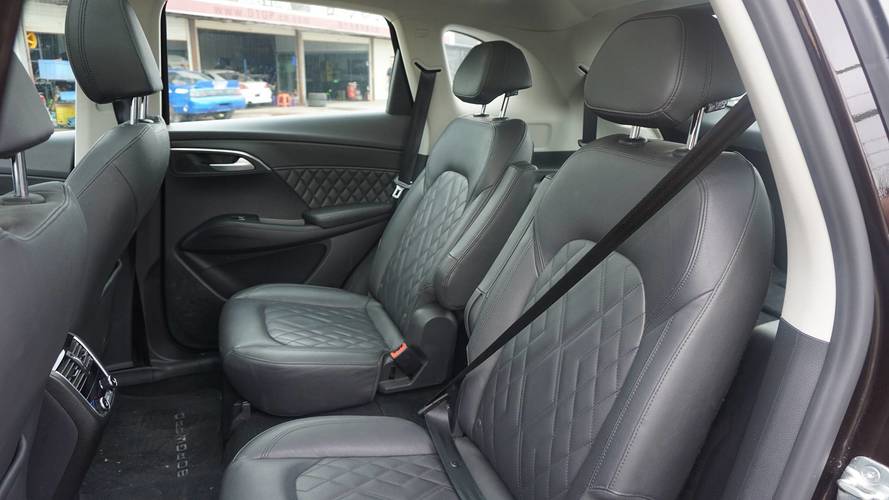 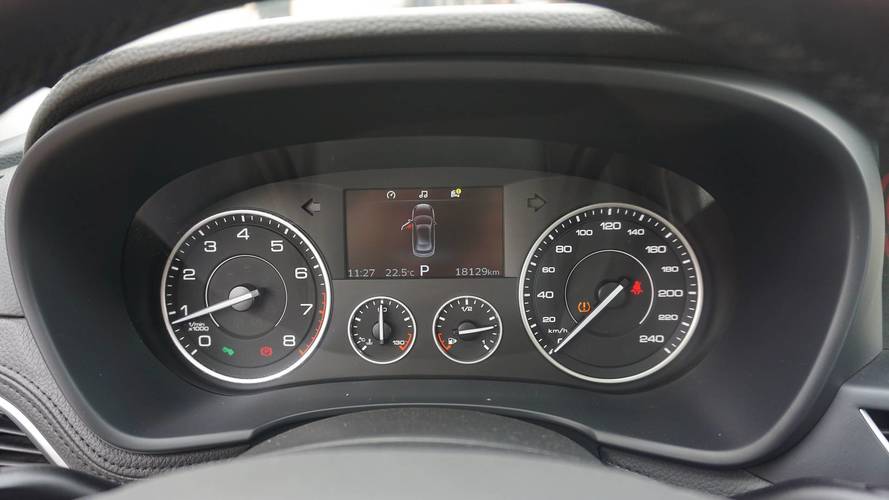 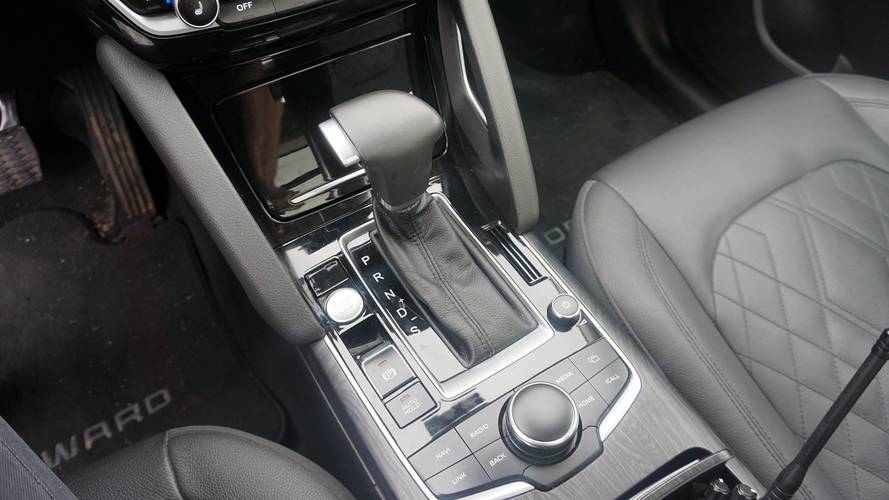 The suspension is so soft as to feel downright mushy, and even under very modest cornering loads it makes the car rather wallow-y.

Despite Audi-aping diamond-stitched seats, and a really big central infotainment screen, there’s even less that I recognize as luxurious in the BX7’s interior. The cabin seems to be screwed together well enough, but the weirdly textured plastics and somber design have more in common with early 2000s Dodge and Chrysler products, than with current German brands.

Again, following the format of the Wey VV7, Borgward powers its SUV with a 2.0T connected to a seven-speed dual clutch. And though the best sources I can find report slightly less power in the BX7 – 221 hp and 221 lb-ft – it’s better delivered on the test track thanks to the all-wheel-drive system, and mercifully shorter gearing on the first two ratios.

In a positive development, the traction and stability control systems don’t feature gut-wrenching intervention in this vehicle. I notice the TC light blinking occasionally when I pull hard out of a corner, or straighten out after the figure-eight on the handling course, but nothing like the previous car’s distracting influence.

Sadly, that’s about the only place where I prefer the dynamic setup of the Borgward over that of the Wey. The suspension is so soft as to feel downright mushy, and even under very modest cornering loads it makes the car rather wallow-y. Steering is really slow, and utterly without feeling, which makes the benefit of AWD almost wasted outside of initial acceleration. 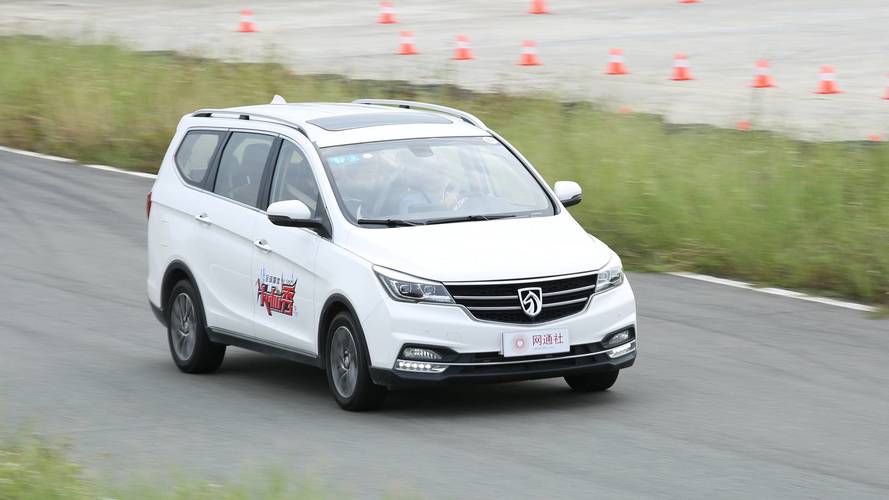 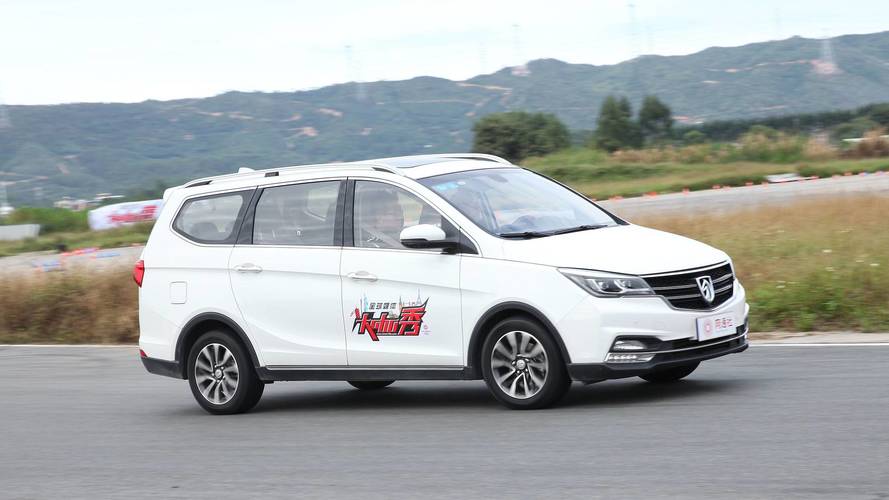 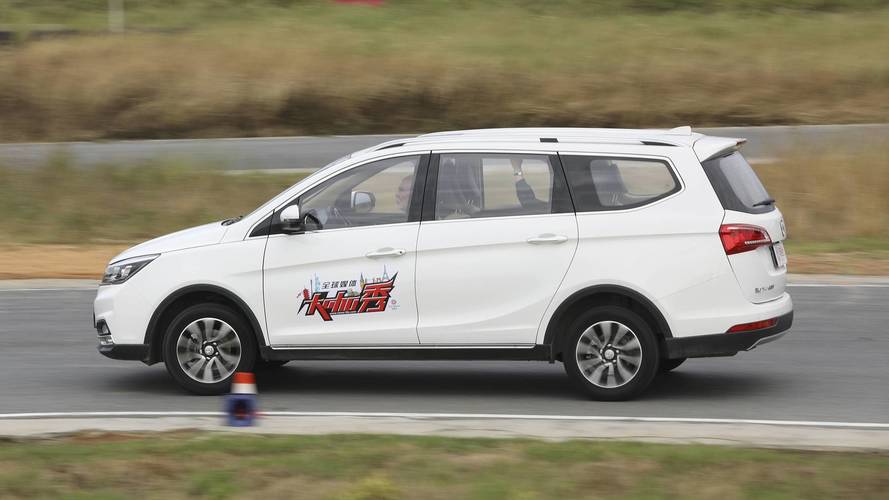 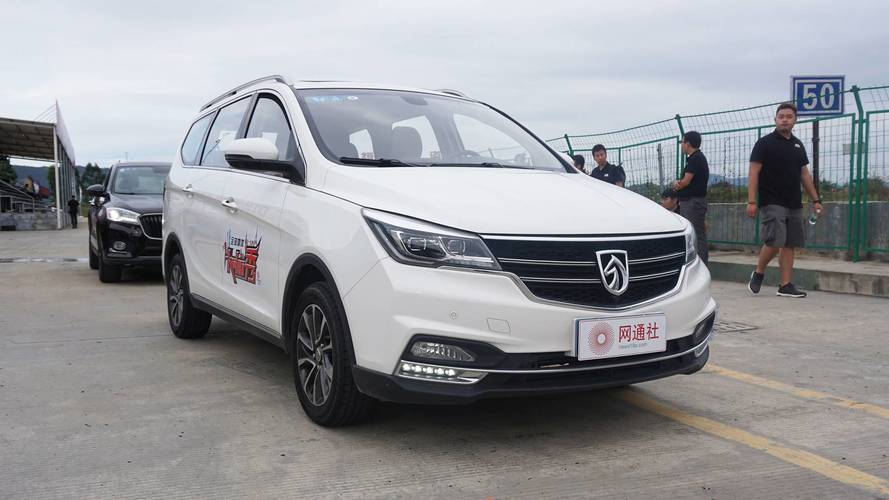 I’ll keep this one brief, as the very idea of testing what is effectively a minivan without sliding doors, on a small track and handling course, is pretty silly. Suffice it to say that, in this kind of testing condition, the SGMW Boujun 730 – product of a three-way joint venture between General Motors, SAIC, and Wuling – feels underpowered, under-tired, and way way out of sorts if I try to push through a corner.

In the context of the actual Chinese consumer market, the setup makes more sense, at least on paper. I’m told that the 730 can be had for the equivalent of $10,000 to $12,000, which, combined with the seven-seat layout, makes up for most, if not all, of the sins of powertrain and packaging. 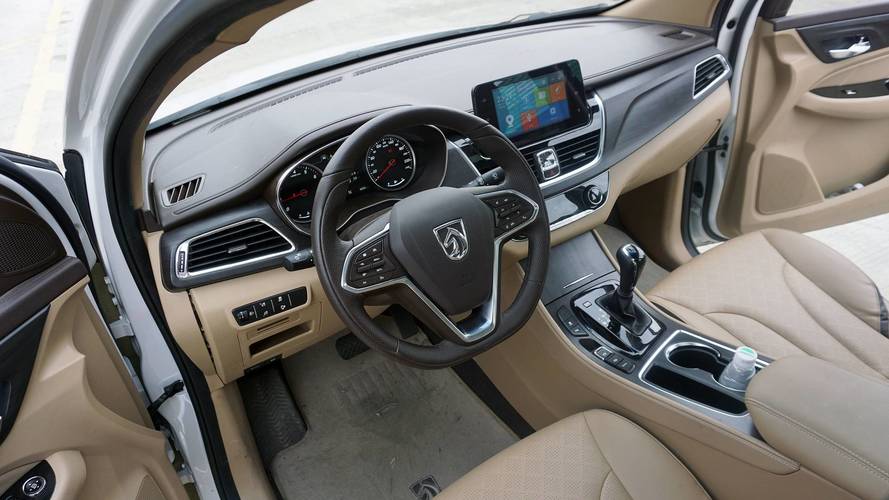 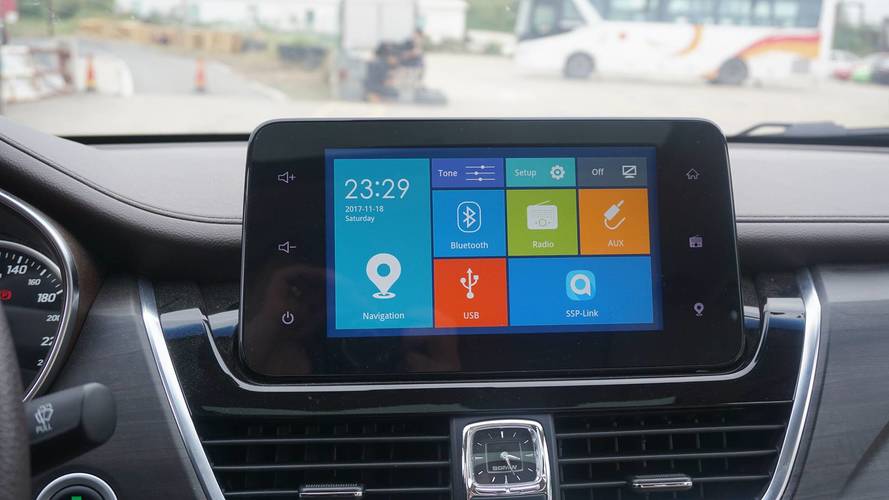 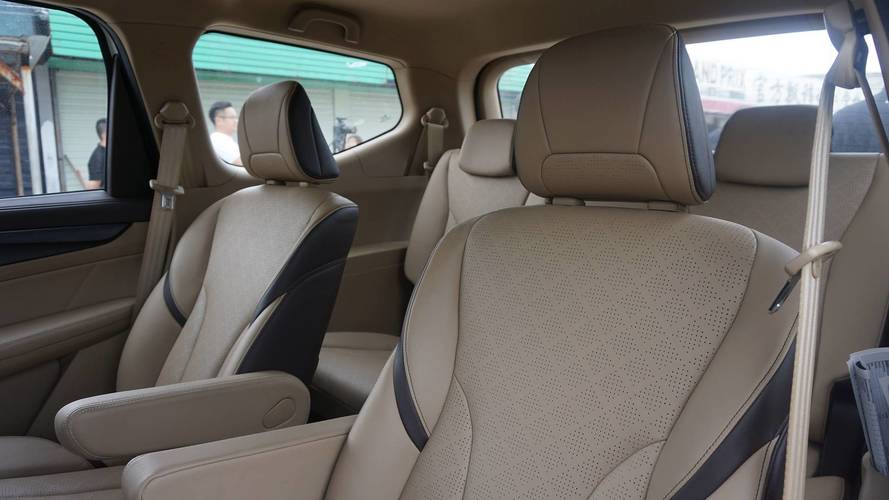 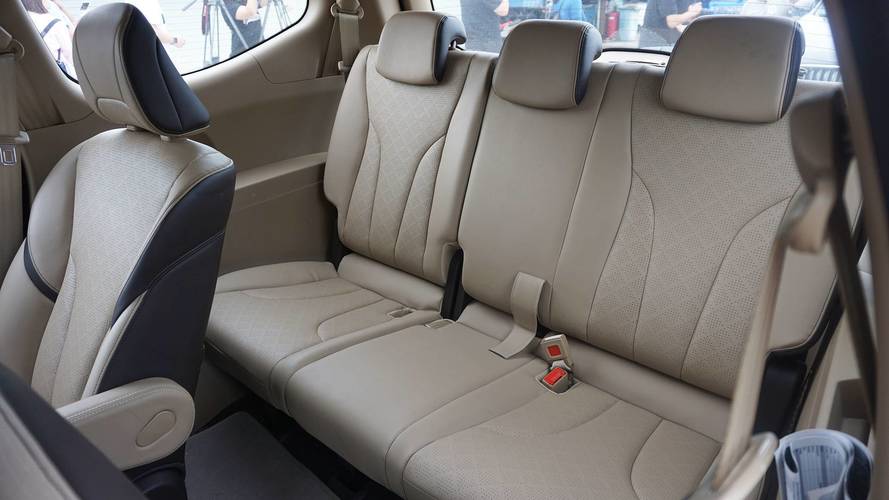 The 1.8-liter four-cylinder is thrashy whenever I’m dumb enough to rev it over about 3,000 rpm; thankfully the lazy five-speed automatic is more than content to keep the engine spinning below that figure, most of the time. Output figures of 135 hp and 137 lb-ft are skimpy, even if this is a size smaller than the minivans I’m used to in the U.S., though in the madness of Chinese big-city traffic there’s little use for huge power.

The interior is pretty practical, though far more what I’ve expected to date of a Chinese-built vehicle. The highlight of the cabin is a big touchscreen that runs software amazingly similar to that of a Windows tablet. But otherwise we’re talking about rough plastics, flat, unsupportive seats, and an overall design that looks a decade or more old.

I have no problem being critical here, but it’s fair to reiterate: this costs ten grand. Even in the North American and European markets, something this utile would find buyers at that price, though it’s hard to imagine building a sustainable business case that way. 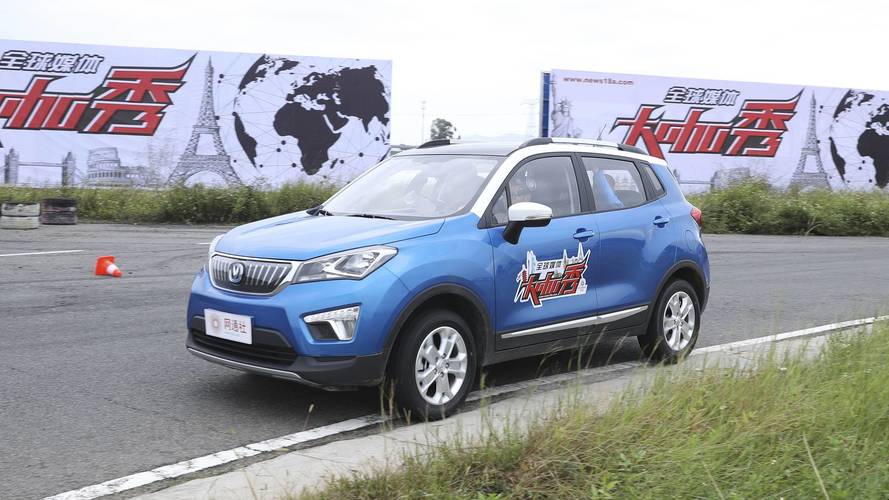 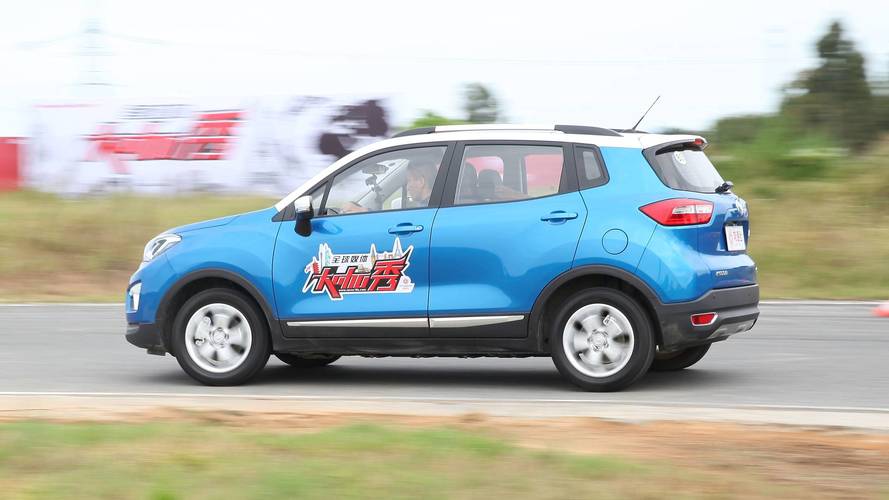 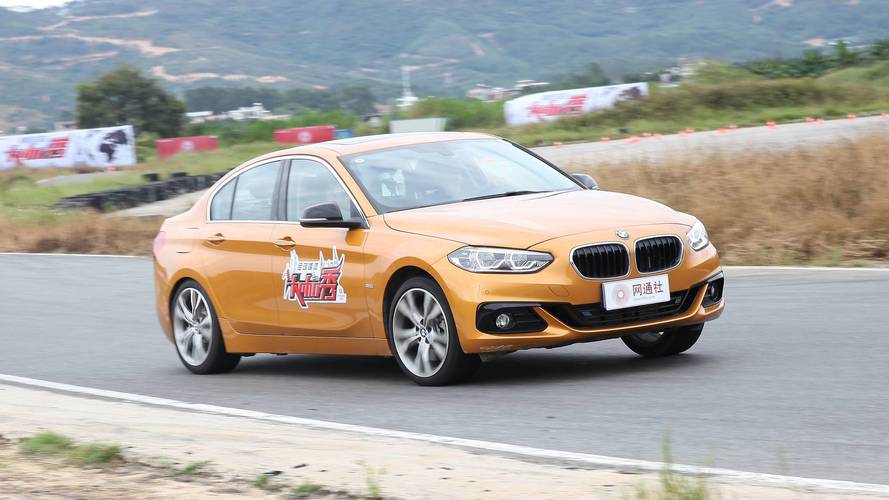 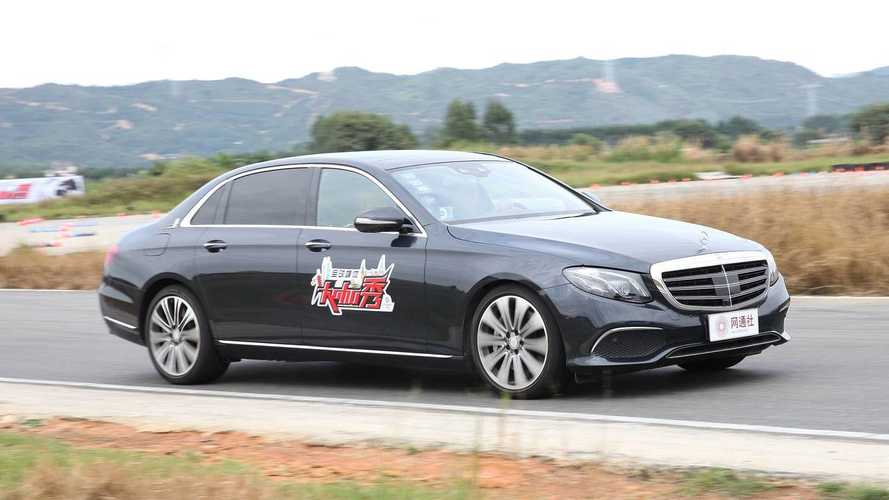 Of the other three cars on offer, I was most excited to sample the Changan CS15 EV. Sadly, the electric vehicle ran low on charge pretty early in the day, so I only really had the chance to sit in it. Mechanically I can’t tell you much, but cosmetically the interior was a fairly nice mashup of Prius and Bolt styling cues: shiny white plastic accents, and a couple big digital displays.

For some reason my hosts also brought a long-wheelbase Mercedes-Benz E320L, and a front-drive BMW 1 Series sedan, both assembled in China. Driving the front-wheel 1 Series was novel, if not mind-blowing; to me it felt a lot like a slightly higher rent version of a Mazda3 sedan. And the E-Class, was, well... long. But apart from the cut-rate limo vibe in the back seat, the car was rather unremarkable.

In the end, I’m not surprised that the two newest vehicles, by brands very focused on selling products in Europe (and eventually here in the U.S.), were the most impressive. If SUVs like those from Wey and Borgward are the current starting point, there’s not so very far to go before Chinese-branded vehicles are dotting the driveways and parking lots of your own neighborhood. There’s work to do, of course, but the future promised by cars like these should have me traveling to China plenty, in the years to come. A world away is getting closer every minute.