Kia’s latest (and greatest) creation has Audi, BMW, and even Porsche in its sights.

Kia makes great cars, this isn’t news. The company’s biggest leap forward came in 2009 when the oddly lovable Soul hatchback hit the market. Since then, Kia’s launched a steady stream of really likable products – vehicles praised by automotive media and the car-buying public alike. Kia’s even at the top of J.D. Power’s quality rankings. Again.

Yet Kia executives admit the brand is still plagued by an ill-informed rhetoric. You know, the “it’s good... for a Kia” nonsense. It’s outdated. It’s dumb. And it stops now. Those same execs are confident that Kia finally has the car to put that image to rest. It’s a labor of love, and man, is it good. World, meet Stinger. 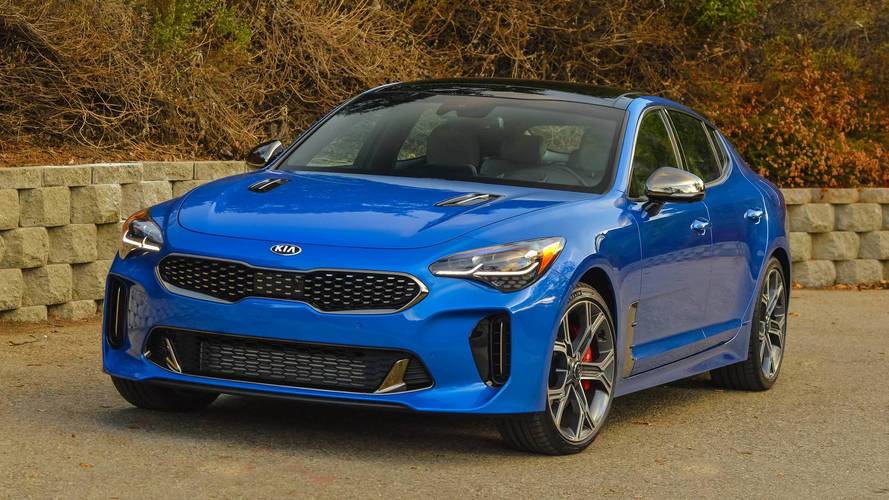 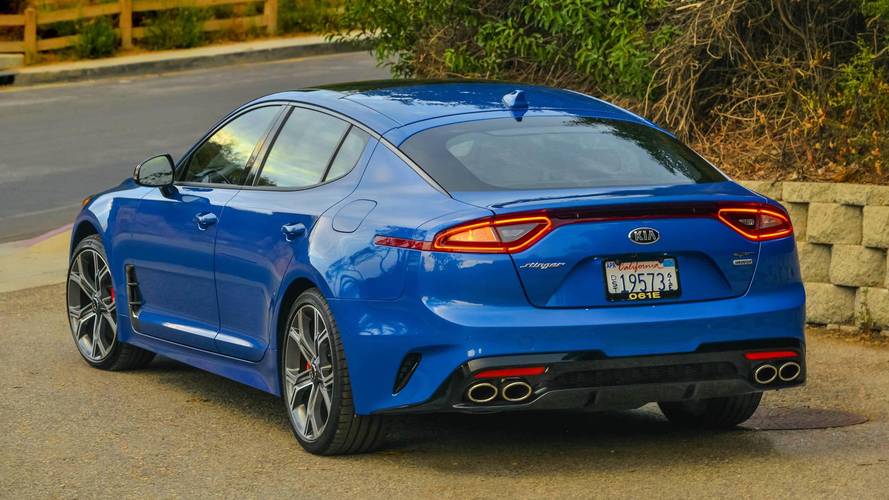 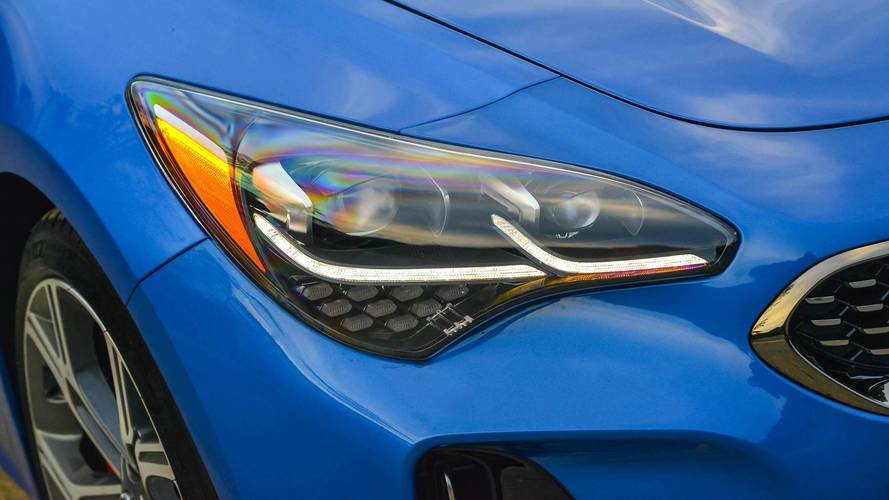 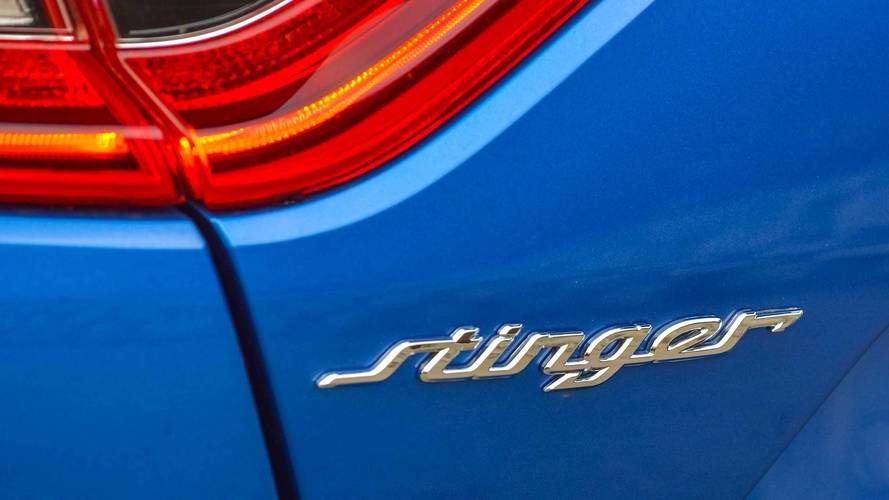 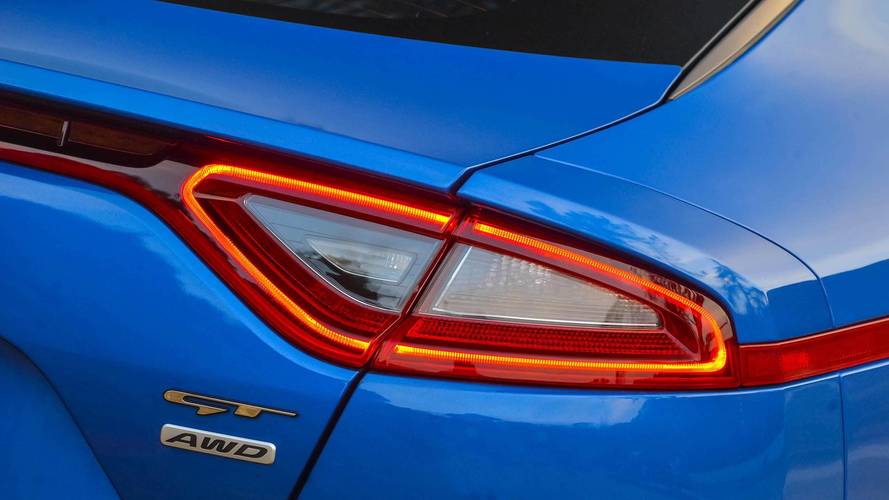 Of the thousands of people who buy the Stinger over its lifespan, a vast majority will do so simply because of its design.

This one’s been brewing for a while. It started in 2011 at the Frankfurt Motor Show when Kia showed the GT concept, a stunning four-door hatchback with a biturbocharged V6 engine and rear-wheel drive. The response was tremendous. Six years later, it’s safe to say the Stinger is one of the most hotly anticipated 2018 model year launches.

It’s more than just a pretty face, though that’s a wonderful place to start. Kia design boss Peter Schreyer and his team hit it out of the park with the GT concept, and it hasn’t lost any of that presence or swagger in the transformation to road-legal machine. In fact, I’ll go so far as to call the Stinger better looking than its conceptual progenitor. This is a car that, from all angles, in all colors, in all environments, commands your attention. I could nitpick elements of the design I find fussy, like the strip of red reflector trim that extends like bad eyeliner from the tail onto the rear quarter panel. But the truth is, of the thousands of people who buy the Stinger over its lifespan, a vast majority will do so simply because of its design.

Only in person can you really get a sense of the Stinger’s size. It’s bigger than you think – dimensionally similar to an Audi A7, BMW 6 Series Gran Coupe, or a Porsche Panamera. That means there’s room for four adults, or five in a pinch, and an ample 23.3 cubic feet of space in the cargo hold, or 40.9 if you ditch your passengers and fold the rear seats flat. 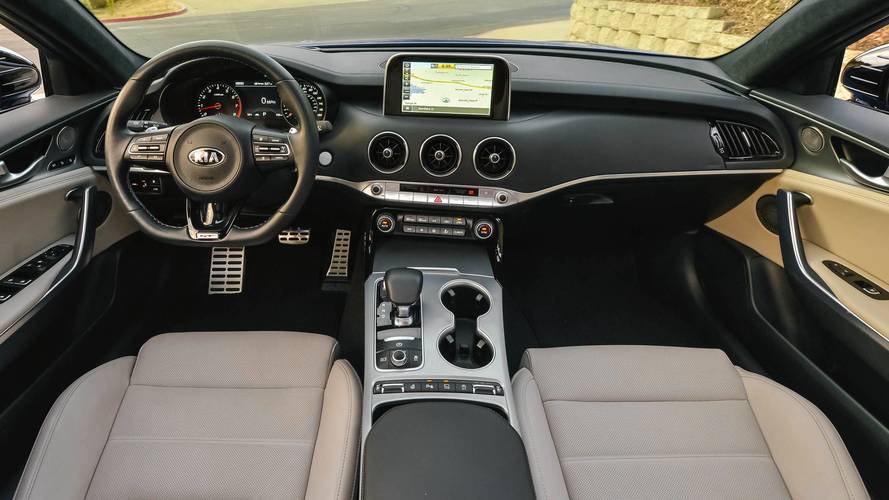 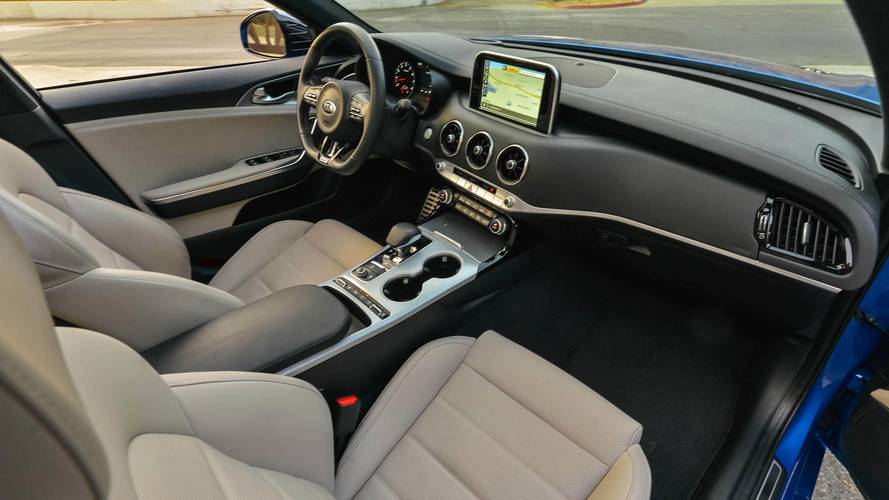 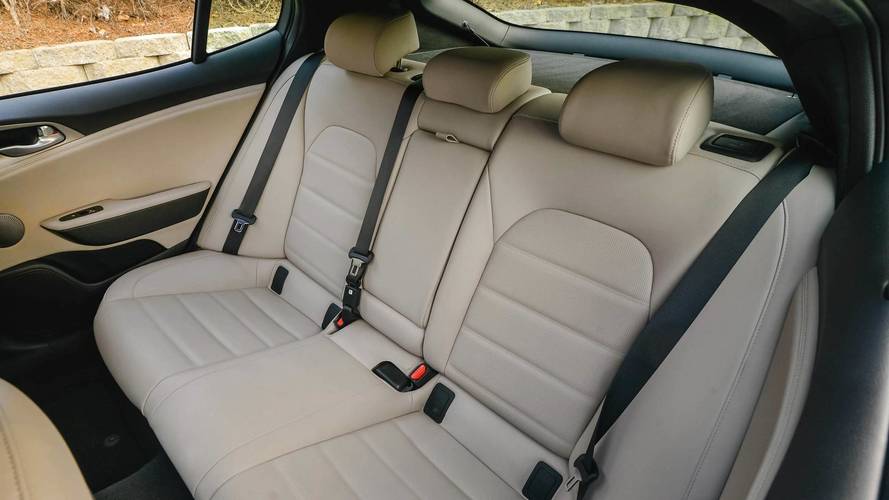 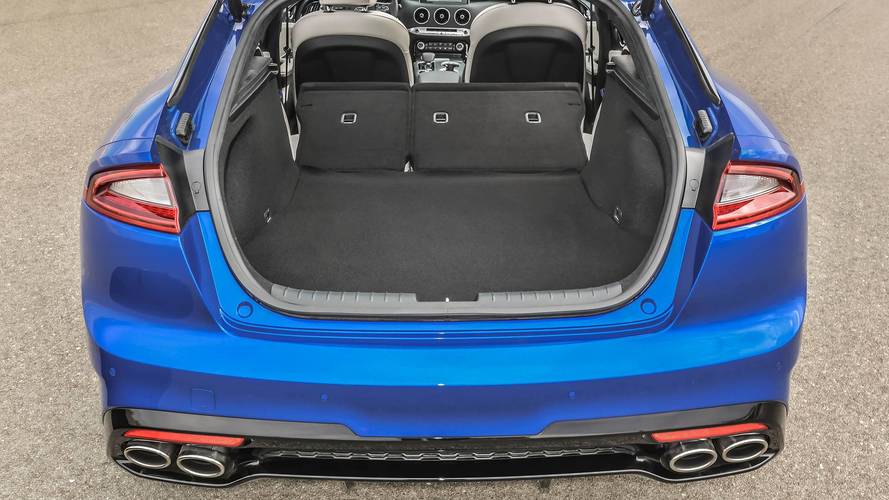 This is a car that, from all angles, in all colors, in all environments, commands your attention.

And don’t think I’m crazy for using Audi, BMW, and Porsche as reference points for a Kia. Those cars aren’t just comparable in terms of size, they’re formidable competitors from a dynamic standpoint, too.

Kia will sell the Stinger with two engines: a turbocharged 2.0-liter inline-four in the base car, with 255 horsepower and 260 pound-feet of torque, or a more powerful 3.3-liter biturbo V6 in the GT, with 365 hp and 376 lb-ft. I’ll have to tell you about the 2.0-liter Stinger another time; Kia doesn’t have any available for testing just yet. But that’s fine. If my experience in the GT is anything to go on, I’ll eagerly sign up for more seat time in the Stinger, regardless of powertrain.

You’ve no doubt heard about Kia’s big engineering coup, stealing Albert Biermann from BMW’s M division with the mission of giving the Korean automaker’s cars a much-needed dynamic zhooshing. It’s worked, too. On a familiar set of canyon roads northeast of Los Angeles, the Stinger shines. The rear-wheel-drive GT dives into a corner with only the slightest hint of understeer. The car stays flat as a wealth of information is delivered through the thick steering wheel. I know exactly what all four of those sticky Michelin Pilot Sport 4 tires are doing at all times, and even in its full-on mode, the traction control is letting me play a little, loosening up the rear end a bit to help that pretty rump shimmy through a turn. Big Brembo brakes offer solid stopping power, with confident feel through the pedal. Optional all-wheel drive can be had for $2,000 if you want it, but on these sun-drenched LA roads, the rear-drive car’s playful rear end has me smiling. 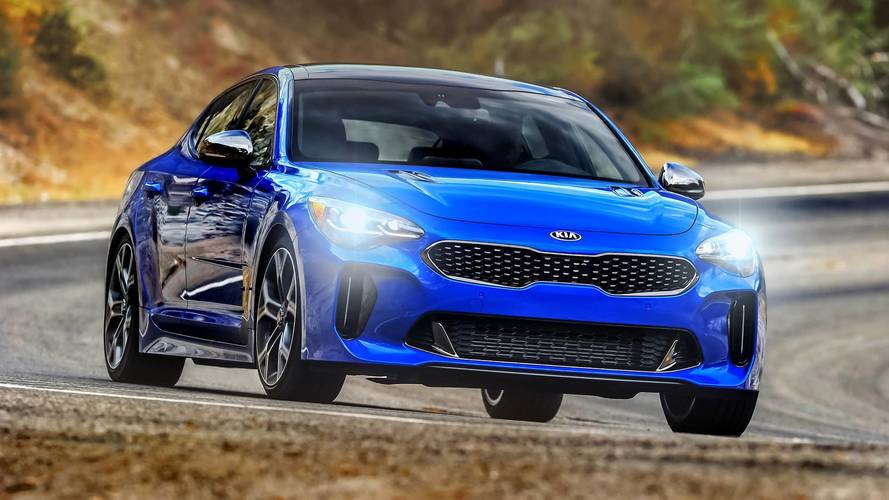 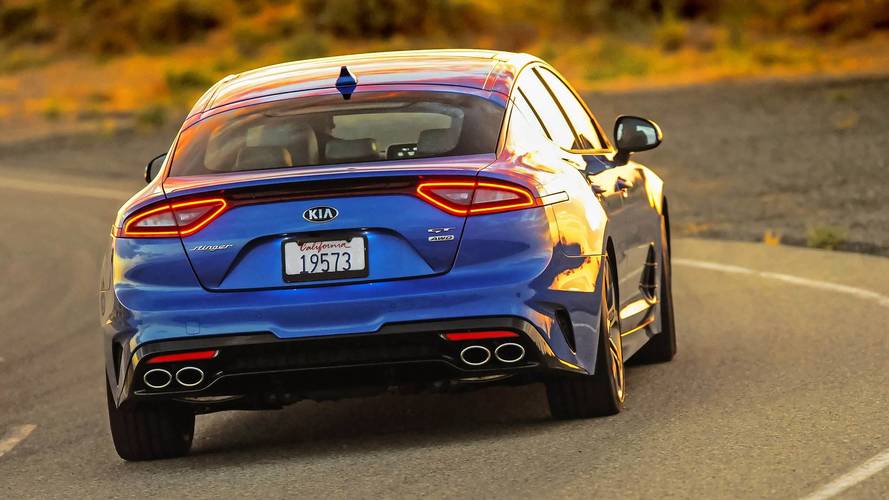 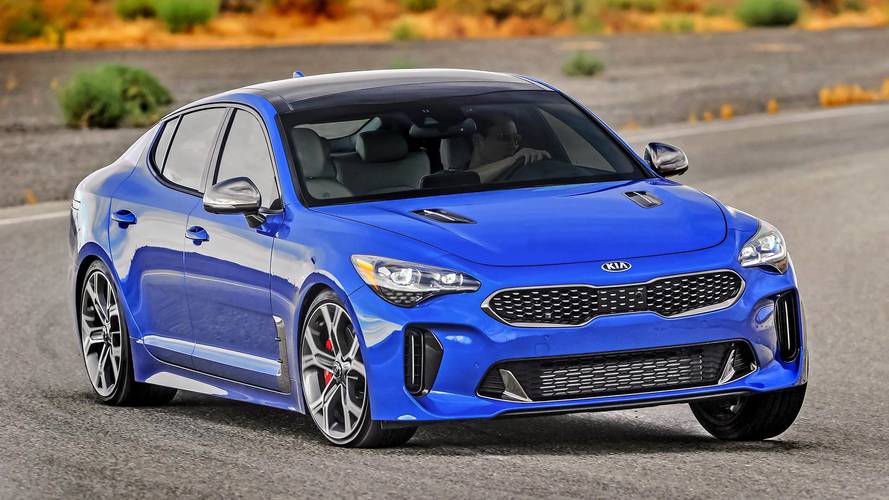 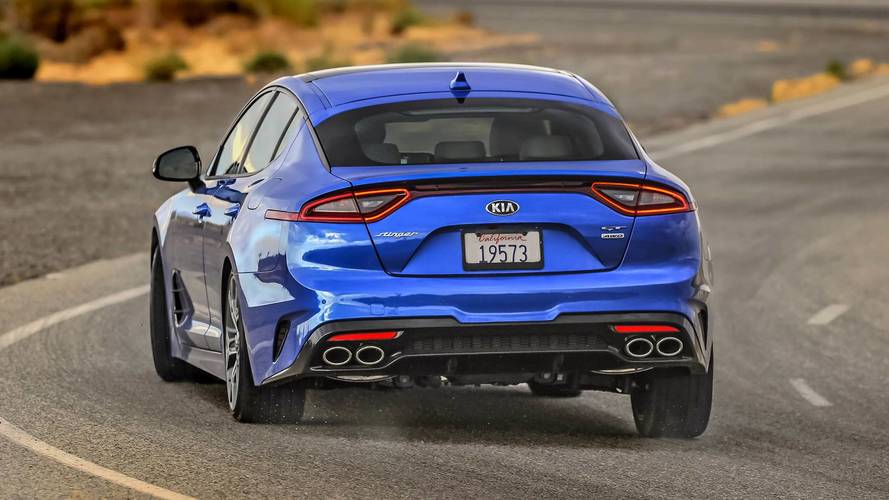 Even in its full-on mode, the traction control is letting me play a little, loosening up the rear end a bit to help that pretty rump shimmy through a turn.

Off the main road, the quicker motions and tighter turns of an autocross course reveal a number of little motions in the suspension, all of which are felt through the Stinger’s body. This is a chatty chassis, especially talkative when pushing the Stinger very hard. A comparative lap in the Audi A7 exhibits a bit more composure in the tight corners, but my seat-of-the-pants feeling is that I’m faster in the Kia.

I’m happy to report that steering feel – a longstanding sore spot for Kia and parent company Hyundai – is mostly good here in the Stinger. In its default setting, there’s no on-center dead spot or false sense of weight to the wheel’s action; heft builds progressively while cornering. But a sour Kia trait rears its head when I turn the drive select button to Sport – there’s no improvement, just added resistance that doesn’t actually result in better steering action. On the other end, turning to Eco mode results in overboosted lightness.

My advice: leave the Stinger in its “Smart” setting. It adapts to your driving style, and won’t fuss with the steering. In fact, whether out on canyon roads or at the autocross course, I recommend avoiding Sport mode altogether. This car is so nicely set up right when you start the engine – Sport mode’s unique throttle mapping, transmission shift points, and steering weight don’t enhance the experience in any meaningful way. 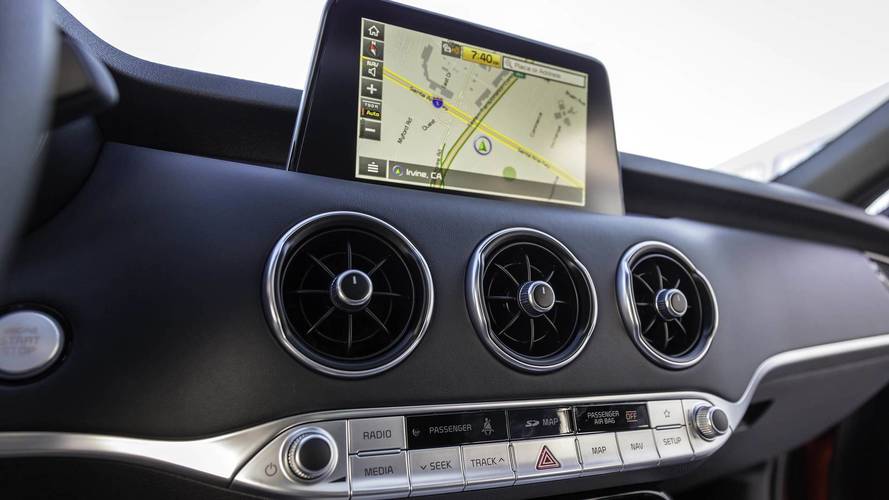 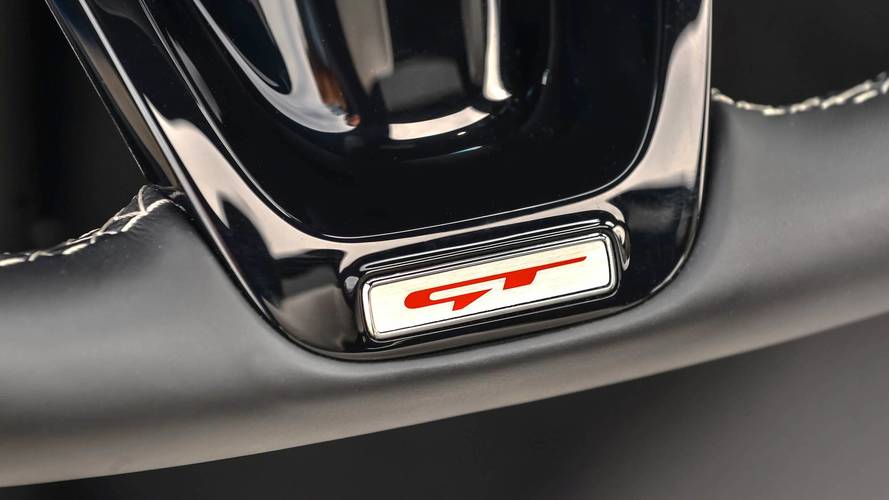 This is a great V6; power delivery is immediate and strong, the eight-speed automatic transmission delivering quick, precise shifts. Kia says the Stinger GT will do 0-60 in 4.7 seconds, but I won’t be shocked if independent testing shaves a tenth or two off that claim. The car is quick, with incredible traction during hard-throttle starts. And while there’s a robust sound from the V6 up front, the quad exhaust pipes out back could stand to have a bit more volume and drama. If this car could sound as good as it looks, it’d be a sensory delight.

From behind the wheel, there’s a lot to like. There’s great forward visibility, with a commanding view down the long hood. I’d like a little more headroom, as well as better sight lines out the back where the thick C pillars cut into the aperture out the raked rear window. But overall, this interior is lovely, though very familiar. The leathers and plastics are nice, as are the metal buttons on the center stack and console, but they’re all obviously plucked from sister company Genesis’ parts bin. The fonts and colors on the instruments are from the rest of Kia’s cars. The Uvo 3 infotainment system works really well, but it’s housed in an average-sized touchscreen, with no unique colors or graphics. The gauge cluster itself looks like it’s been wholly ripped out of an Optima, or maybe a Sorento, or perhaps a Cadenza. Who knows?

Don’t get me wrong, this is a very quiet, very comfortable interior. It just lacks any real Stinger identity. Maybe some real wood accents, carbon fiber, or daring color choices? A fully digital gauge cluster? Those are good places to start. For a car that’s so special to look at and drive, a stronger statement could stand to be made inside the cabin. 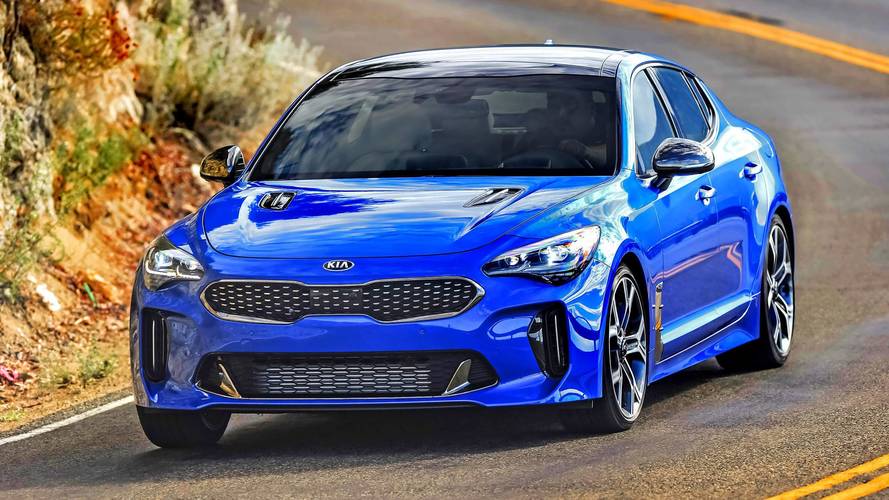 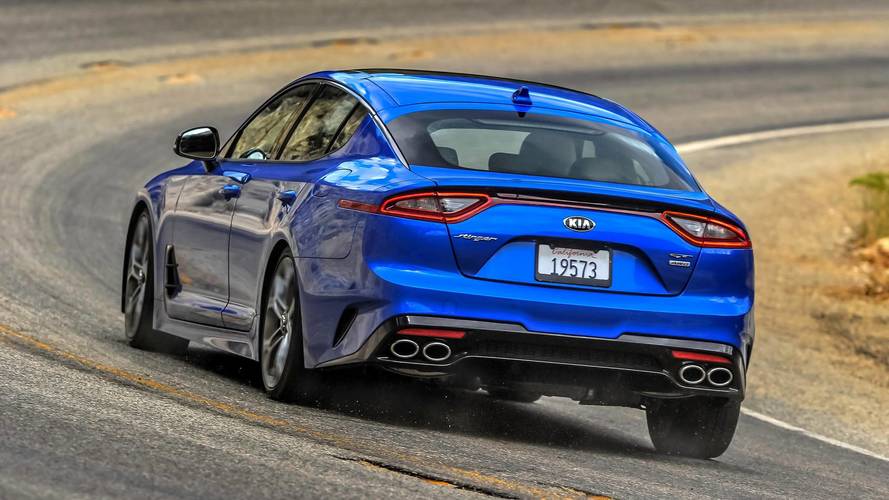 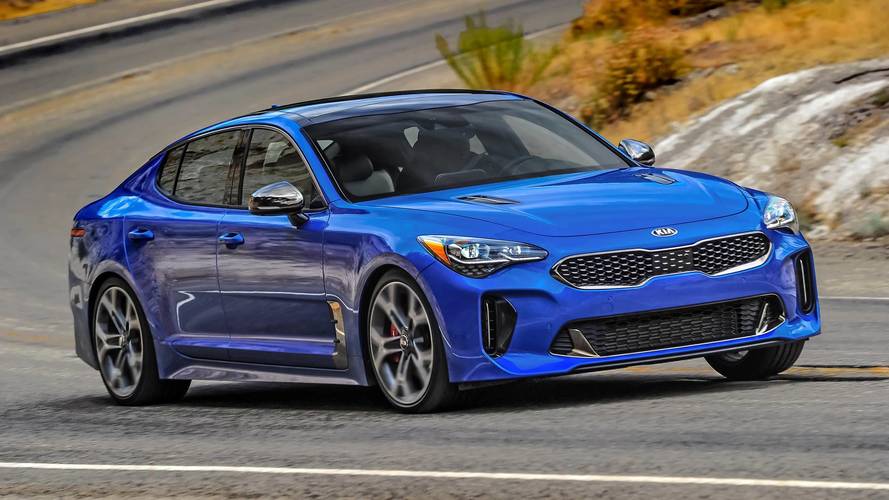 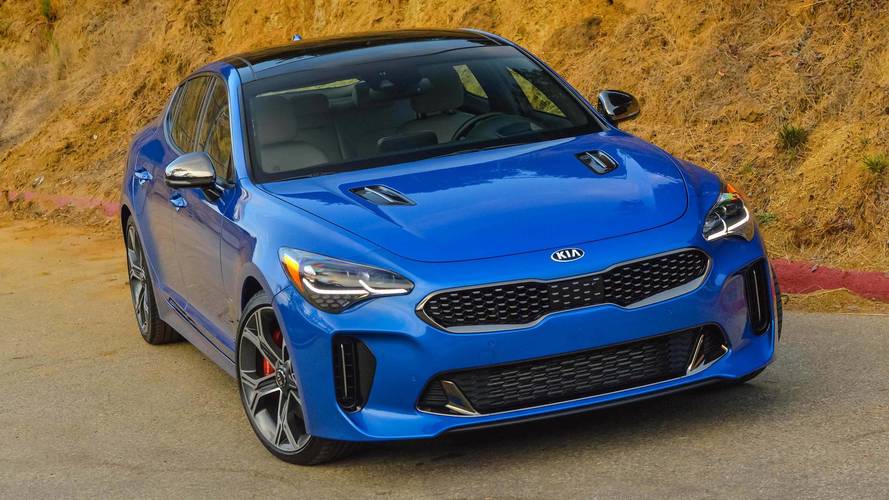 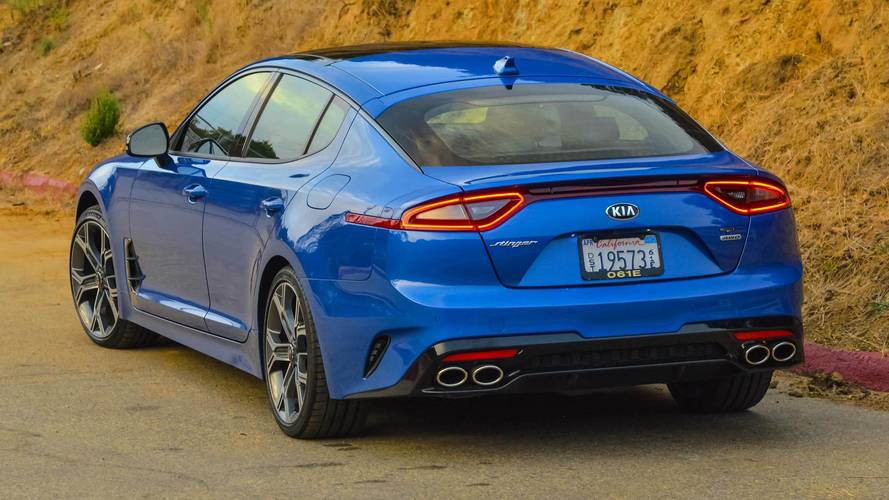 That said, you’re getting a cabin – and a car – that fights way above its price class. Stinger pricing starts at $31,900 for the base 2.0-liter, rear-drive car, not including $900 for destination. GT models with the biturbo V6 begin at $38,350, and a fully loaded version (called GT2) with optional all-wheel drive is a cool $52,100. That’s a huge discount over an Audi A7, which starts around $70,000, and even undercuts the cheaper S5 Sportback, which starts at $54,400. No matter the engine or trim, every single one of the Stinger’s competitors is much more expensive. Don’t even get me started on the Panamera.

Of course, Kia knows it’s not going to change the minds of Audi, BMW, or Porsche customers with its 2018 Stinger. But there’s a whole chunk of mid-market luxury sedans like the Acura TLX, Cadillac CTS, Infiniti Q50, Lincoln MKZ, and Volvos S60 that stand to lose a lot of would-be buyers to this very good-looking, very good-driving Kia – maybe even an on-the-fence A4 or 3 Series buyer, too. Even the forthcoming Genesis G70 has a thing or two to be worried about, especially since the Stinger offers the exact same experience in a far more interesting shape. It remains to be seen how many of these things Kia will actually sell, but hot damn does the Stinger make an impressive statement. And for Kia, that’s a plenty big win on its own.