Ford’s biggest SUV adds more of everything – and that’s a good thing.

No, the fullsize, body-on-frame SUV is not dead. In fact, consumer appetite for vehicles like the Ford Expedition remains plenty strong; truck-based models like this are, in many ways, much more capable overall than car-based family crossovers. But the Ford Expedition had gone a long time without a significant update, letting General Motors’ line of big SUVs – the Chevrolet Tahoe/Suburban and GMC Yukon – take the lead in terms of sales volume. For 2018, Ford fights back with an all-new model.

The big news is that, like the F-150 pickup truck, the Expedition now wears an aluminum suit to help it slim down. The total weight loss is claimed to be as much as 300 pounds, but that mainly applies to the long-wheelbase version. The regular Expedition loses 97 to 199 pounds, depending on configuration, whereas the diet cuts 297-298 pounds for the longer Expedition Max. That’s an impressive weight loss given than the 2018 Expedition adds a whole lot more equipment and grows in length. The standard model is 4.0 inches longer on a 3.5-inch-longer wheelbase, while the extended-length model – now renamed Max instead of EL – grows by 1.1 inches on a wheelbase that’s up 0.6 inch.

Of course, the real numbers you care about are the following: 6 USB ports, 15 cupholders, 8 seats, up to 121.5 cubic feet of cargo space, and tow ratings up to 9,300 pounds. As ever, the Ford Expedition is extremely capable both in terms of pulling stuff and transporting precious cargo on board. Need to venture down unkempt trails? There’s even an FX4 model with improved ground clearance and other tweaks for mild off-roading. 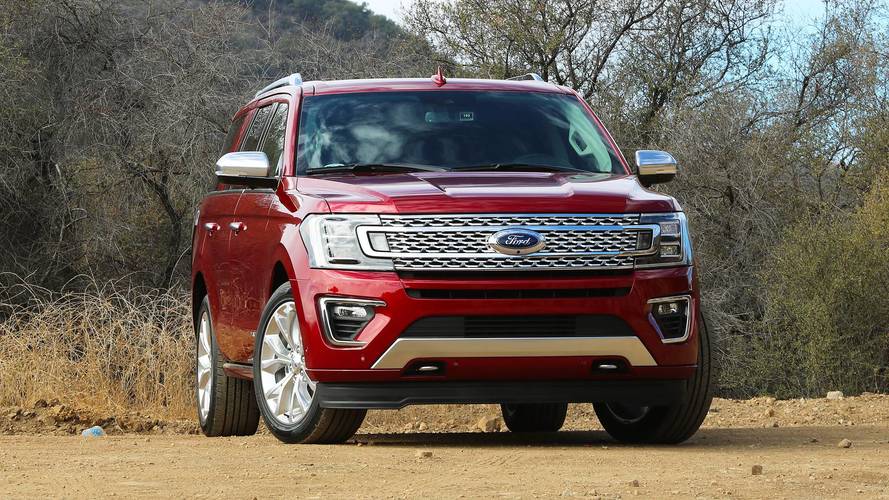 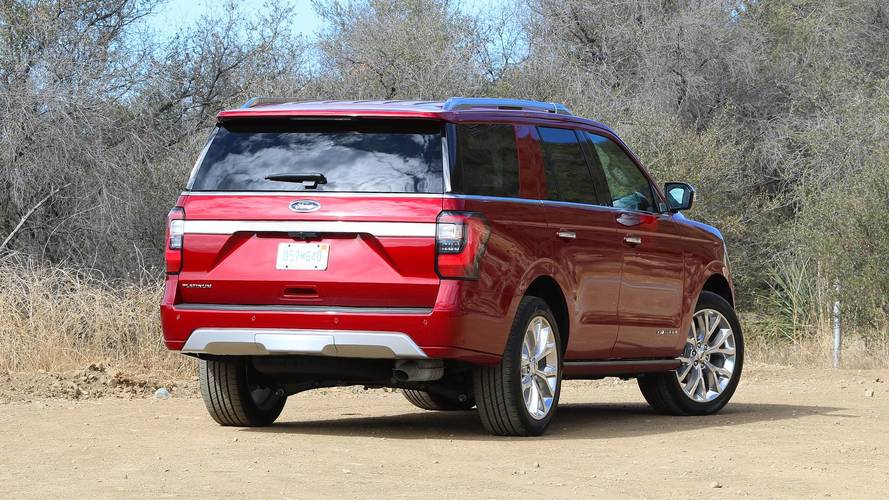 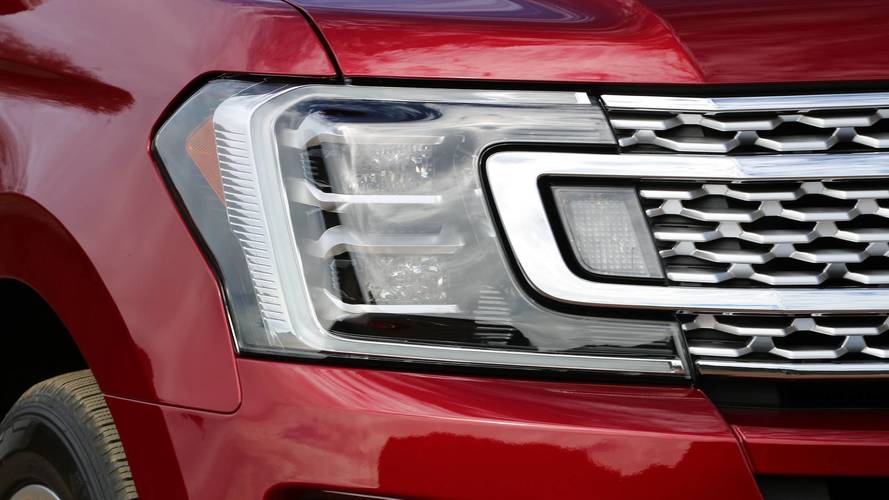 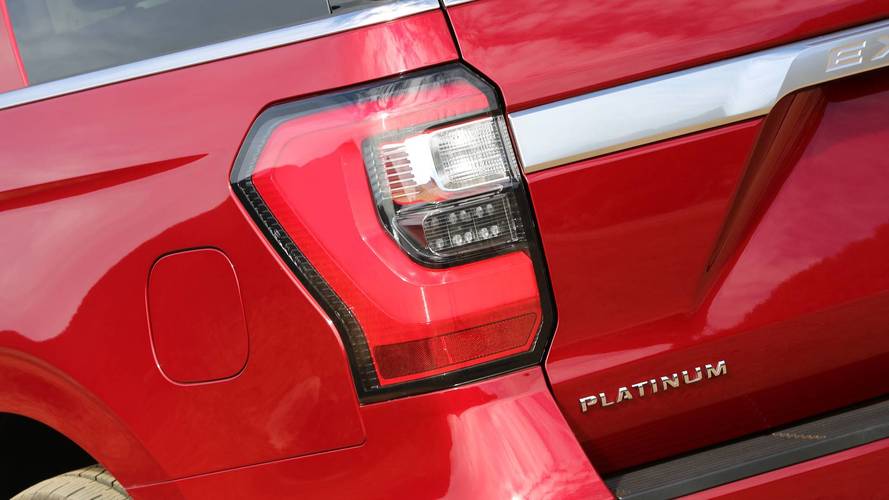 All models retain the rough-and-tumble boxy look of the past Expedition, but with new creasing, chrome trim, and more elegant design elements from every angle. From behind, for instance, the exhaust is now (finally!) hidden behind the bumper. And from the front, the headlights and grille form one sleek bar that makes the nose appear wider. It’s a far less ungainly look than the snout on the Expedition’s luxury sibling, the Lincoln Navigator. The bracket-shaped elements in the lights draw a visual link between the Explorer crossover and F-Series Super Duty pickup line. All told, it’s still a big, boxy Expedition, but it’s now a much more stylish and more modern one.

The weight-loss regime can be felt immediately behind the wheel, with the new Expedition feeling fleeter in every direction. Its biturbocharged 3.5-liter V6 engine pulls with authority, delivering a stout 375 horsepower and 470 pound-feet of torque in most models and an even beefier 400 hp and 480 lb-ft in the top-end Platinum trim. Working in tandem with the new 10-speed automatic, it accelerates briskly, with the transmission swapping ratios eagerly to best deploy the engine’s low-end grunt. And that’s unladen; even when I tow a 5,500-pound trailer up and down a hilly stretch of road, the engine impresses. The transmission never hunts, instead allowing the turbos to settle in and provide a wallop of mid-range shove with only a smidge of surging.

It sounds good, too, with a deep purr as the V6 builds power. Of course, most of what I hear is artificial sound enhancement pumped in through the speakers; Ford admits that it thought buyers would want a tough V8-like noise and thus faked the soundtrack. It’s an odd thought given how popular six-cylinder powertrains have become in the F-150 pickup truck. 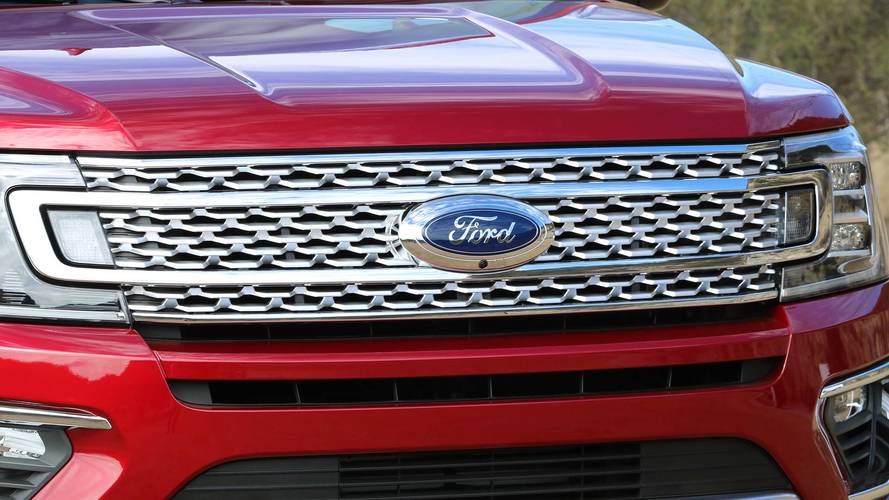 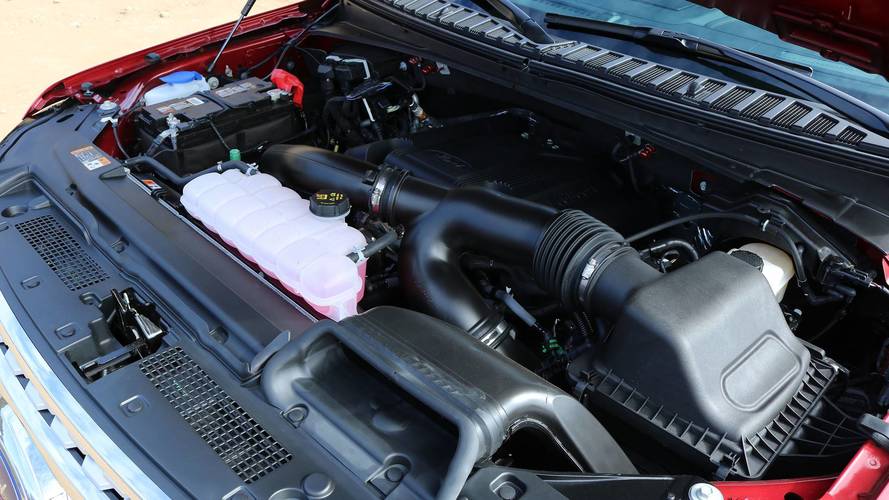 Body motions are impressively damped and controlled through switchbacks; country roads should not cause any motion sickness for passengers.

The Expedition also feels light on its feet when the roads twist. Expertly judged power steering is light enough not to tire, quick enough to make the lengthy SUV feel nimble, and steady enough to prevent any back-and-forth wandering in a straight line. While no one will be entering any slalom contests with an Expedition, body motions are impressively damped and controlled through switchbacks; country roads should not cause any motion sickness for passengers. It rides comfortably on all road surfaces, albeit with the slight shudder over bumps common to all body-on-frame SUVs.

The driver has a commanding view out over the hood and easy access to pertinent controls. The analog gauges and full-color trip computer are familiar from the F-150 pickup truck, as are the blocky steering-wheel controls and straightforward center-stack arrangement. In the loaded-up Platinum models I’m testing, there’s stitched leather for the dash and door panels, real wood trim, and even massaging front seats.

But there are plenty of things that betray the feeling of luxury: you’ll feel some sharp, rough edges as you run your fingers over the controls and plastics. And even this dressed-up model has some very utilitarian touches, like the black plastics on the lower dash that remind of its pickup truck relations. 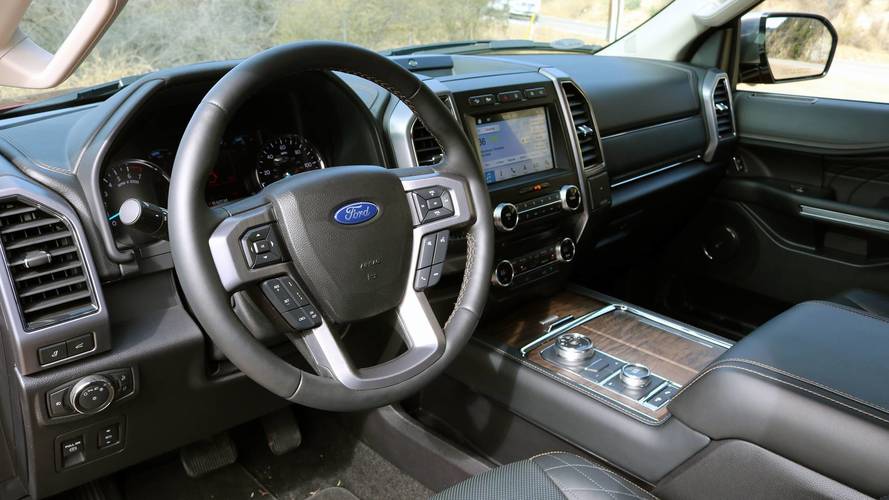 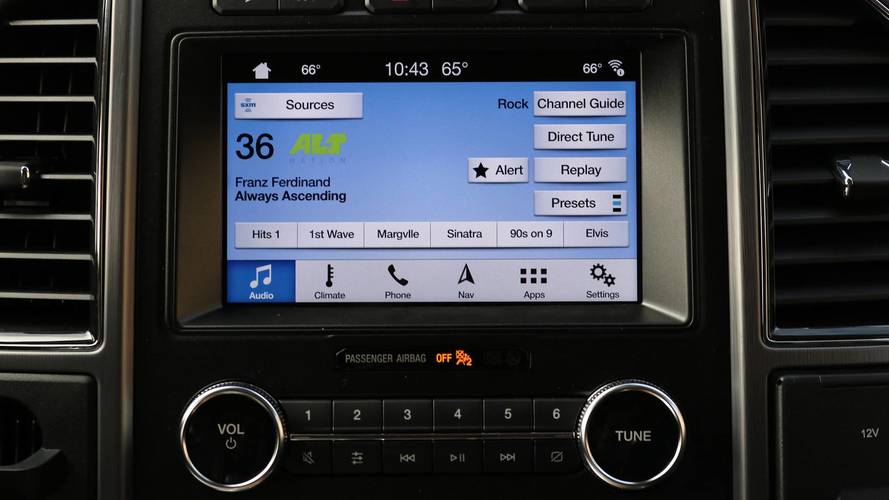 It finally catches up to – and maybe even beats in some regards – the big SUVs from Chevrolet.

Head- and legroom improves in all three rows of seats, and the third row is remarkably accommodating for a fullsize adult like myself. Squeezing back there is easier, too, thanks to tilt-and-slide second-row seats that move out of the way even with a child seat strapped in, a feature that will no doubt please family buyers. There’s ample visibility out of the windows in all rows, and access to cupholders and both 12-volt and USB ports should keep passengers quiet.

Cargo room with all three rows of seats in use is a healthy 19.3 cubic feet in the standard Expedition, which beats the Chevy Tahoe, and 34.3 in the Max, which is a little less than in a Chevy Suburban.

Ford’s Sync 3 touchscreen infotainment system is perfectly functional for everything from navigation to music, with simple menus and reasonably quick responses. The white-and-pale-blue graphic scheme, however, looks dull. Optional gadgets to keep your family entertained include rear DVD-player screens that can show live TV via the Slingbox app, a wireless internet hotspot that can connect 10 devices, and a B&O Play sound system. For the driver, there’s wireless phone charging, Apple CarPlay/Android Auto integration, adaptive cruise control with stop-and-go functionality, a 360-degree camera system, and blind-spot monitoring that still works with a trailer hooked up. Pro Trailer Backup assist, which allows drivers to “steer” a trailer in reverse by twisting a knob on the dash, works flawlessly when I try it. The electric power steering whips the wheel back and forth while I keep my eyes on the backup-camera view and mirrors, saving me a whole lot of hand-over-hand maneuvering. 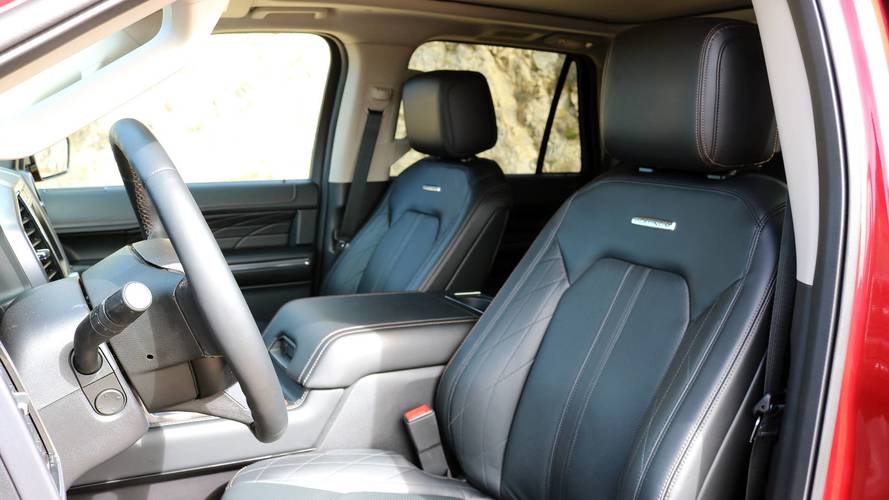 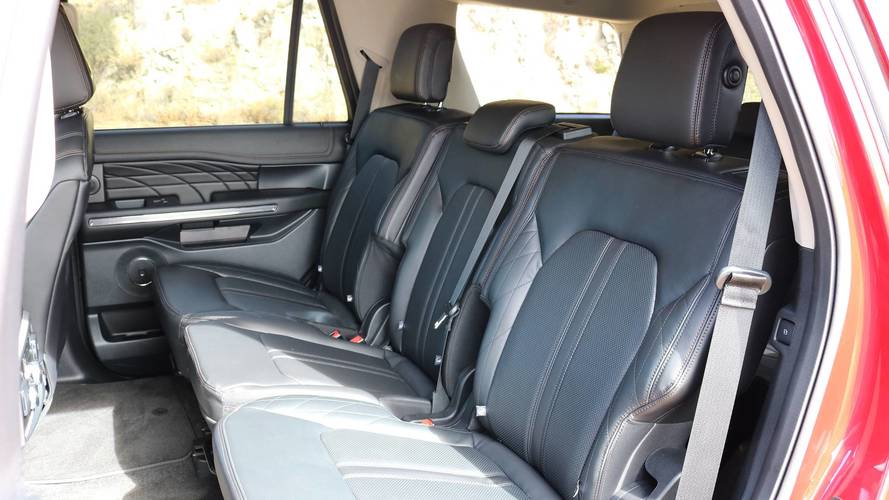 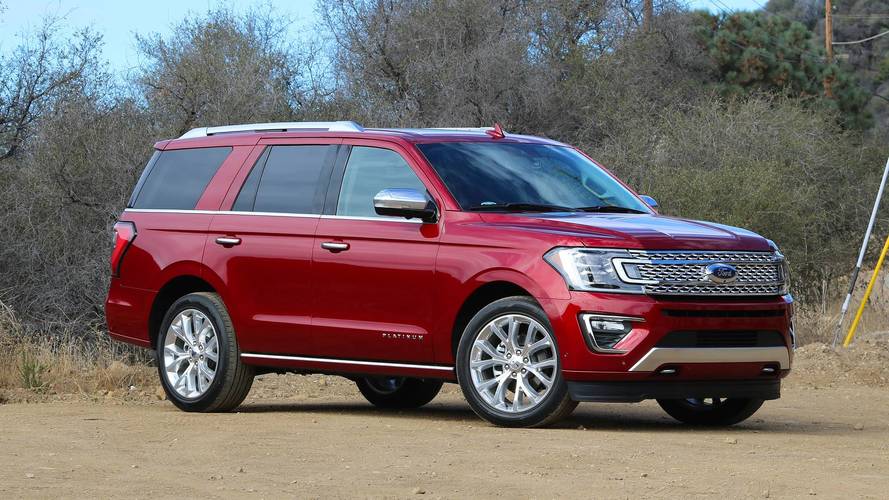 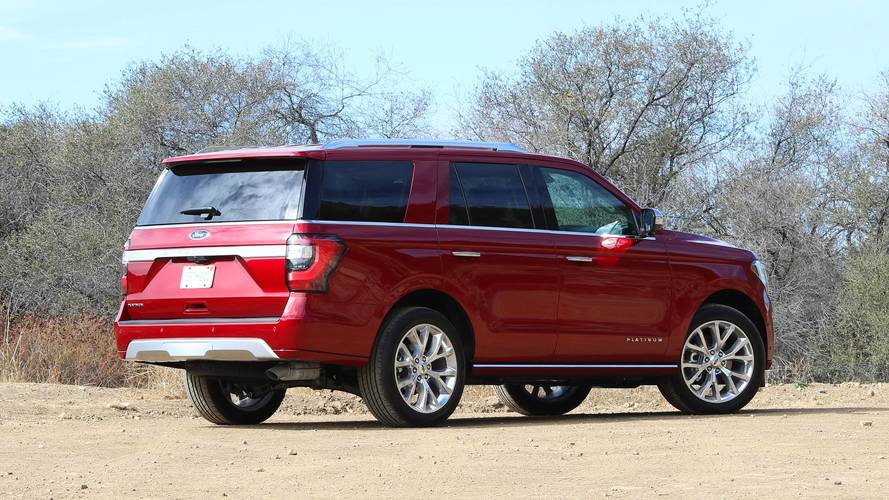 Thanks to the new transmission, improved aerodynamics, and reduced weight, the 2018 Expedition is more fuel efficient than before. It’ll manage as much as 17 miles per gallon city and 24 highway in rear-wheel-drive, short-wheelbase form, down to a minimum of 16/21 mpg if you get the four-wheel-drive Max. That beats out Chevy’s V8-powered Tahoe and Suburban, which manage no better than 16/23 mpg in their most fuel-efficient configurations. Electing the Expedition Platinum, however, requires premium gas to deliver all 400 hp.

Is it worth it? Those prices aren’t anything beyond what this segment typically commands, and represent the incredible amount of ability you’ll find from a full-size SUV like this. The bottom line, though, is that it’s worth the price because this Expedition is really good in every respect. It finally catches up to – and maybe even beats in some regards – the big SUVs from Chevrolet.

The 2018 Ford Expedition is still a beast, but now it’s a beast that’s more capable, lighter on its feet, more enjoyable to drive, and filled with more features to make every journey simpler. Whether you need to tow, carry your entire clan, or tackle some mild off-roading, the 2018 Expedition is ready and willing.