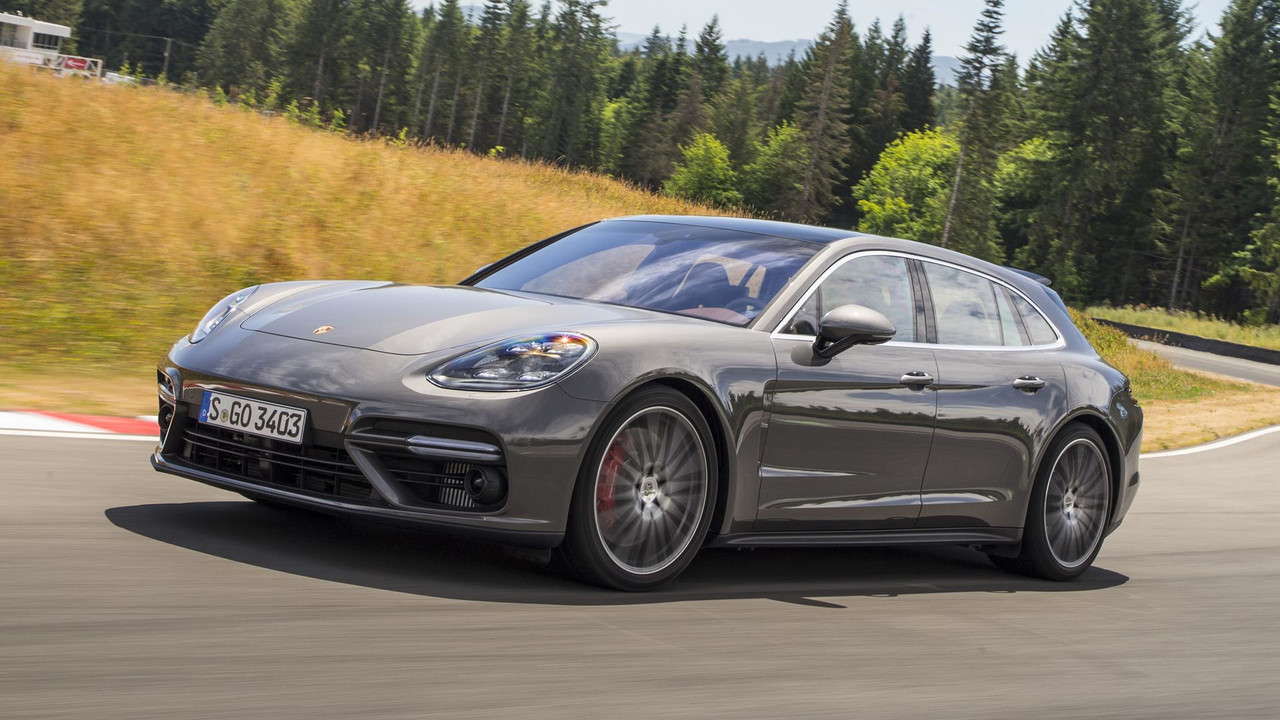 No surprise, Porsche’s fast wagon is a hoot and a half.

Tall trees and green grass flank either side of an empty, winding, sun-soaked road in British Columbia. Behind the wheel of the Porsche Panamera Turbo, these lush surroundings seem to fly by at warp speed. The biturbo V8 roars as it sends massive power to all four wheels, and I’m tossing this Panamera through corners like it’s a 911, smiling and laughing maniacally, manhandling this big Porsche with generous chutzpah.

Indeed, these words could be plucked straight from my recent review of the Panamera Turbo. But this time around, I’ve got an extra reason to giggle. This isn’t just any Panamera, it’s the Sport Turismo. The wagon. The 550-horsepower, 567-pound-feet Porsche station wagon. And holy crap, it’s purple.

For as tactile and agile as the Turbo Sport Turismo is on great back roads, it is still an exemplary grand tourer.

The best thing about the new Sport Turismo – aside from, you know, wagon – is that none of the intrinsic Panamera-ness is lost in the reshaping of its rump. From the B-pillar forward, the Turismo is identical to the standard Panamera, and the butt-lift only adds 88 pounds that, I promise, you cannot feel from behind the wheel.

Switch the drive mode to Sport Plus, mash the throttle, and 60 miles per hour arrives in the same 3.4 seconds as the standard Panamera Turbo, when fitted with Porsche’s Sport Chrono package. All-wheel drive is standard across the Sport Turismo range, which means no rear-end skittishness under hard launches, or any funny business from that reshaped tail during fast cornering.

Every single compliment I can give to the normal Panamera Turbo applies to the Sport Turismo. The steering is brilliant, with great levels of both weight and feedback that inspire incredible confidence as I push the wagon harder and harder down unfamiliar Canadian roads. Whether on the standard 20-inch wheels or the optional 21s, the ride quality is superb, with enough cushion to reduce jarring impacts on broken pavement, but great amounts of stiffness to eliminate body roll or any wafting tendencies. You could drive this thing clear across Canada and never experience discomfort. For as tactile and agile as the Turbo Sport Turismo is on great back roads, it is still an exemplary grand tourer.

The best thing about the new Sport Turismo – aside from, you know, wagon – is that none of the intrinsic Panamera-ness is lost in the reshaping of its rump.

A brief stint in the E-Hybrid reveals it to be a particularly interesting choice. What I love most is the stark Jekyll-and-Hyde contrast between the two ends of the E-Hybrid’s driving spectrum. On one hand, you can effortlessly cruise under full EV power for up to 31 miles, but turn the drive mode switch on the steering wheel one click to the left, and Sport Plus mode lights a fire under the hood. The engine powers on with full force, the throttle response sharpens, the exhaust opens up. Earn quiet applause from your eco-minded colleagues as you silently start up your electrified Panamera, and then yell “just kidding, suckaaaaas!” as you activate Sport Plus and drive off in a cacophony of raspy six-cylinder wail. Yeah, it’s a hybrid. But it’s also a Porsche, so…

That also means the 4 E-Hybrid is just as nice to steer as the other Sport Turismo models. Running the same gorgeous roads north of Victoria, the electrified model rewards me with the same great dynamics as the Turbo. It’s slower, yes – a full second slower 0-60 than the Turbo – but important factors like overall balance and levels of feedback are just as high here. Don’t let the electric-green badge accents and brake calipers distract you: this isn’t just a hybrid, it’s a Panamera hybrid. Wagon. Wee!

If you’re eyeing the Sport Turismo solely for its practicality, maybe try the Cayenne instead.

As for practical wagon stuff, I’ll call the Sport Turismo good but not great. There’s a bit more room in the back seats because of the higher roofline, with two- or three-abreast seating configurations available. With the back seats up, you’re treated to 18.3 cubic feet of storage space, which isn’t even one more cubic foot than the standard Panamera. Even with the seats folded, cargo space only grows by 3 cubic feet (46 for the hatchback, 49 for the wagon). That’s plenty of room for lots of luggage or several homes’ worth of groceries, but if you’re eyeing the Sport Turismo solely for its practicality, maybe try the Cayenne instead.

Of course, if you’re eyeing the Sport Turismo for its shape and panache, I can’t say I blame you. This thing looks killer from all angles, with a sleek longroof shape, wide rear haunches, and a rear end devoid of an enormous, retractable wing. That said, there is a retractable spoiler built into the, uh, spoiler, but it only activates at very high speeds or when the panoramic sunroof is fully open, to aid with aerodynamics. It’s like a cute little aero flap, and nothing more.

Everything else is carryover Panamera stuff, right down to the interior materials and onboard technology. You get the full cockpit experience from the regular Panamera, complete with 12.3-inch touchscreen for the Porsche Communication Management infotainment system, as well as the flat touch-surface panel that surrounds the petite shifter for the eight-sped dual-clutch transmission. Rear occupants are treated to PCM touchscreens mounted to the front seats, and if you opt for the four-passenger layout, there are more controls and storage cubbies in the console that runs between the two rear chairs.

If you’re already going to spend upwards of $100k on one of these, what’s an extra five grand for something that’s a little more functional and a lot more interesting?

As far as I’m concerned, there are only three reasons why you’d buy a normal Panamera instead of the Sport Turismo: 1) You want the base, two-wheel-drive model; 2) You want to spend $200,000 on the 680-hp Turbo S E-Hybrid that isn’t available as a Sport Turismo (which I’ve also driven – stay tuned); or 3) You hate things that are cool. The added cost of the Sport Turismo is between $4,000 and $6,000, depending on model, with the base Panamera 4 starting at $96,200. And, come on, if you’re already going to spend upwards of $100,000 on one of these, what’s an extra five grand for something that’s a little more functional and a lot more interesting?

Besides, it’s not like weird Porsche wagons are a dime a dozen; this is a car that exists not because it has to, but because it can. It’s a thrill to drive and something elegant to behold. It is the pure essence of the already fantastic Panamera, with more room for the life you bring along.