Big brakes and 500 horsepower are enough to make this resto’d Ford fast, even without succumbing to actual, boring modernity.

Taking classic Detroit iron and retrofitting it with modern hardware isn’t exactly a revolutionary concept in 2017. Pro touring builds have been popular for some time now, and for good reason: if done right, they can substantially improve a vintage car’s capability without robbing it of its old-school appeal.

It’s a delicate balancing act that’s executed properly only on rare occasions, but my interest was piqued when I learned that Classic Recreations was behind this GT350CR Shelby Mustang project. For more than a decade and a half the Oklahoma-based coachbuilder has specialized in making over 1960s Mustangs into pavement-pounding monsters the likes of which only rolled out of Ford’s Dearborn, Michigan factory in gearhead dreams. The company’s overall mission is exemplified by its Eleanor-style GT500CR flagship, a head-turner of a car which sports a fuel-injected 545-horsepower, 427 cubic-inch (7.0-liter) V8, a Tremec five-speed gearbox, and numerous other go-fast goodies. It also includes modern luxuries rarely found in old school muscle cars, like fully adjustable seats and functional air conditioning. 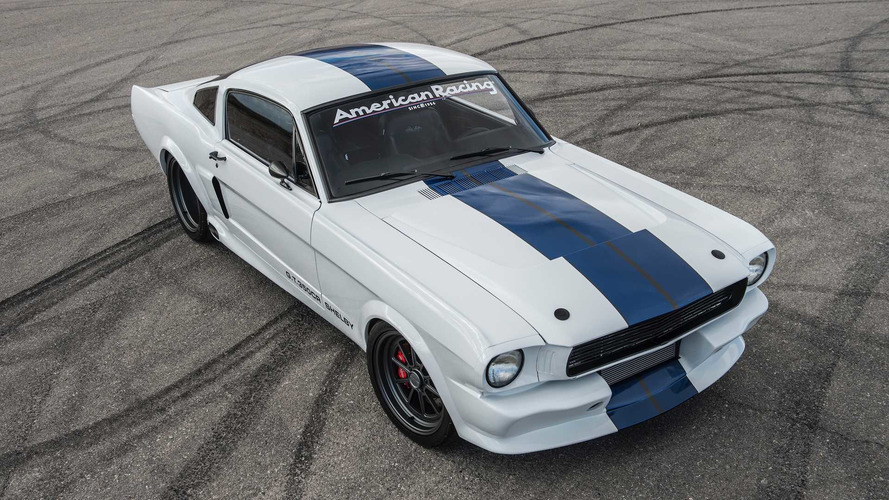 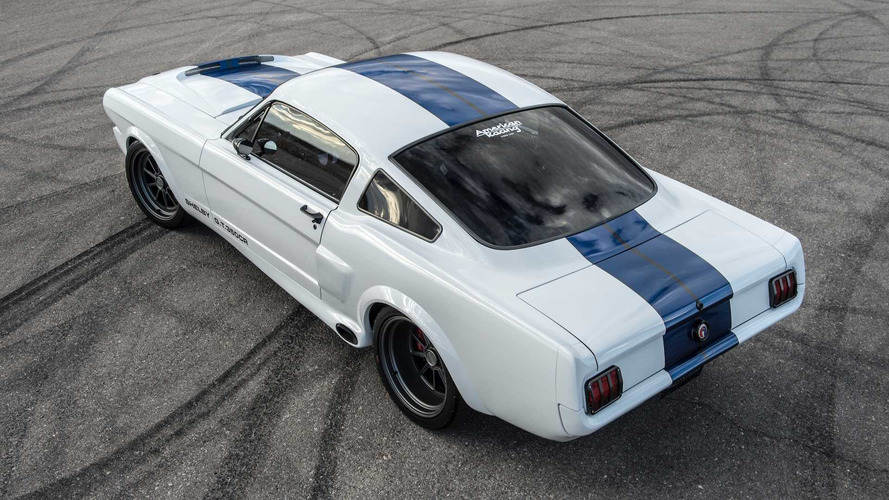 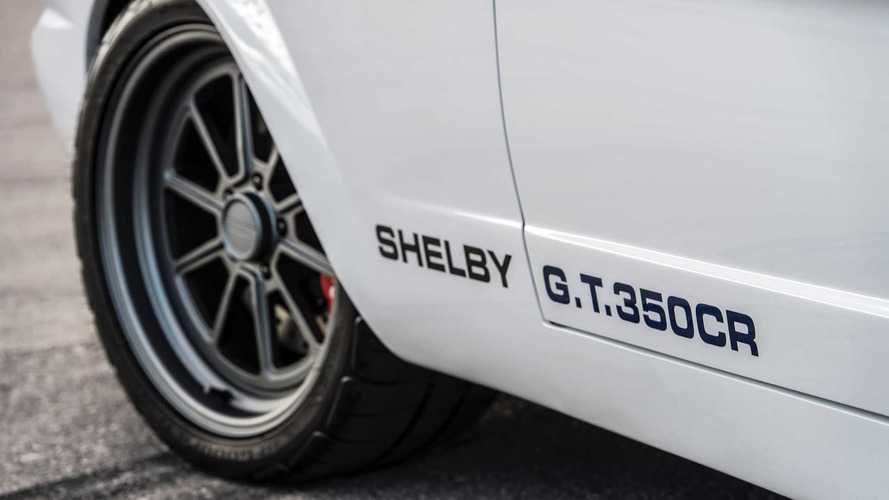 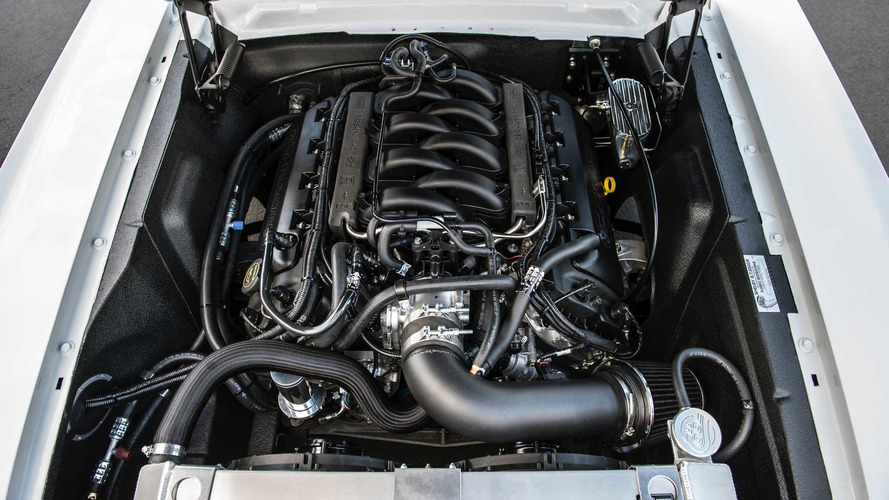 The naturally aspirated powerplant provides the kind of motivation, throttle response, and reliability that original Shelby GT350 owners could only dream of back in the day.

The concept behind the Pro-Touring GT350CR follows that same line of thinking, but this package seems to be more focused on the original intent of the Shelby GT350 specifically. Unleashed on the public in 1965, the Shelby GT350 Mustang was essentially a homologation special, built in order to make Ford’s then-new pony car eligible for the SCCA’s popular B-production racing class. To that end, Ford and Carroll Shelby took a garden-variety Mustang and beefed up the suspension, brakes, drivetrain, and other components all in the name of bolstering the Mustang’s road course prowess.

The GT350CR takes that notion several steps further by injecting a ’66 Mustang chassis with modern-day performance hardware like six-piston Wilwood brakes, rack-and-pinion steering, an extensively reworked suspension system by the engineering gurus at Detroit Speed, and a warmed-over version of the 5.0-liter DOHC V8 normally found under the hood of today’s Mustang GT.

Here outfitted with an intake manifold borrowed from the new GT350 Mustang’s 5.2-liter mill and boasting custom ECU tuning by Lund Racing, the naturally aspirated powerplant makes roughly 500 hp and provides the kind of motivation, throttle response, and reliability that original Shelby GT350 owners could only dream of back in the day. 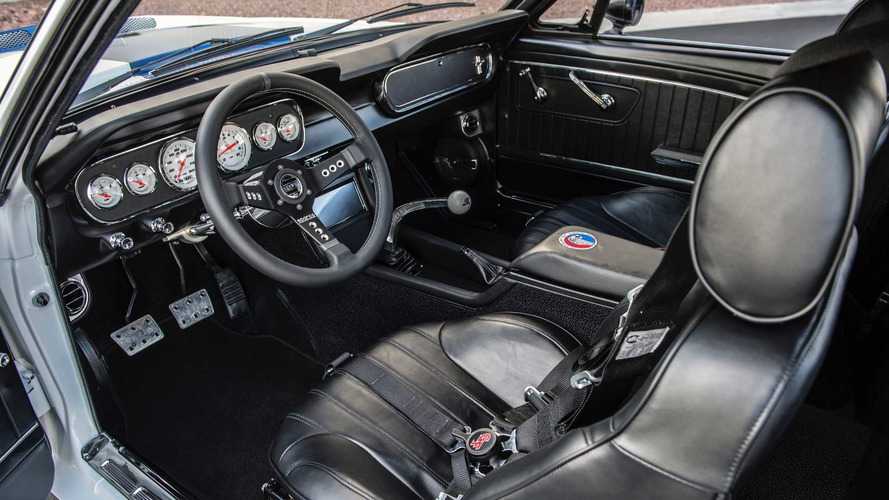 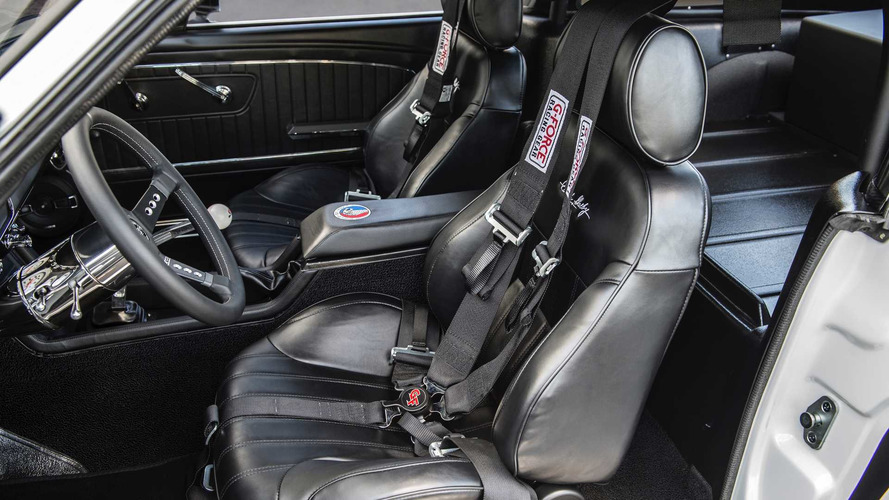 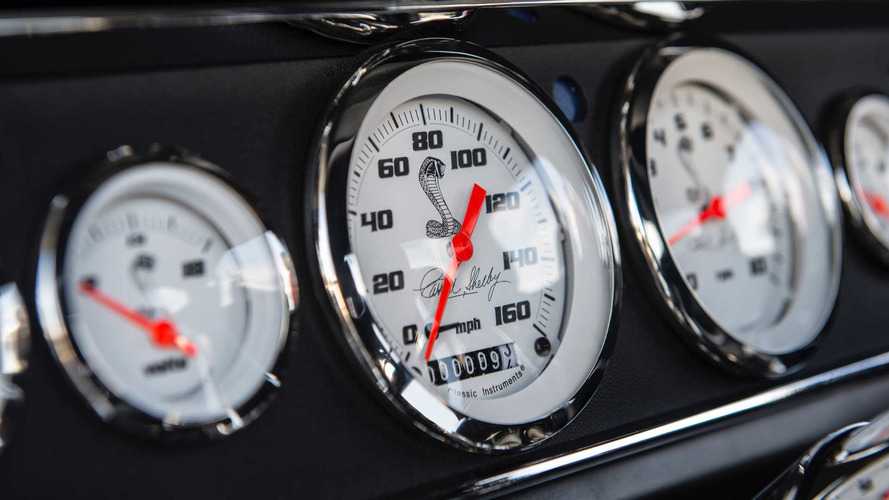 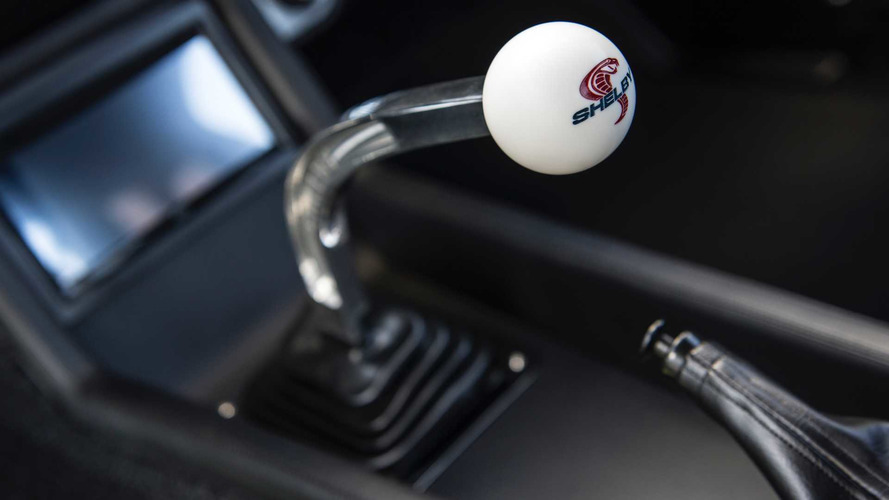 “With the Pro-Touring GT350CR Shelby Mustang we wanted to add a subtle restomod look that wasn’t over the top and served a purpose.”

It looks the part too, cutting the distinctive figure of a first-generation Shelby Mustang while adding some purposeful flare to the mix. “I believe in form and function – that’s something you will hear in my shop twenty times a day,” explained Jason Engel, the owner of Classic Recreations. “With the Pro-Touring GT350CR Shelby Mustang we wanted to add a subtle restomod look that wasn’t over the top and served a purpose.”

Accordingly the bulging bodywork provides clearance for the forged 18-inch American Racing wheels that are wrapped in BFG Rival competition rubber and far wider than the original fenders would allow for, and the custom-fabricated hood features functional heat extractors to improve cooling during the rigors of extended track sessions. The molded rocker panels offer cutouts for the exhaust system’s side pipes, a true dual system which does not incorporate a traditional X or H pipe connector between the two cylinder banks, resulting in a distinctive roar that sounds right at home in this Shelby.

While the pro-touring modifications applied to this ’66 Mustang have undoubtedly improved its capability by leaps and bounds, it still feels like an old-school performance car, for better and for worse. The inclusion of a tilt steering column as well as sport buckets with adjustable seat backs makes the GT350CR a significantly more comfortable machine to operate than an original Mustang – particularly in a performance context – but the heavy clutch, long shift throws, nebulous brake pedal feel, and requisite odd quirks that come with a foundation that’s more than five decades old serve as a reminder that no, they don’t make them like they used to, and that’s not always a bad thing. Still, the physical engagement inherent to operating such a machine has a charm all its own, and there’s little doubt that this Shelby would be an absolute blast at a track day or a local autocross event. 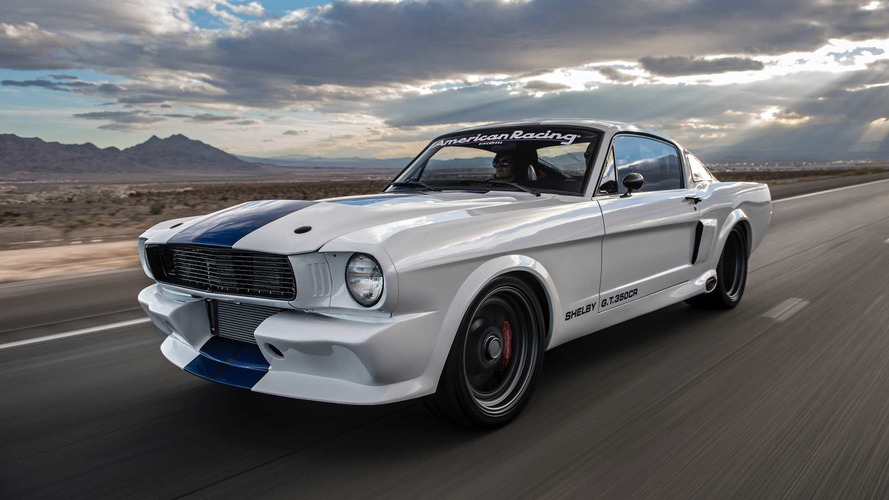 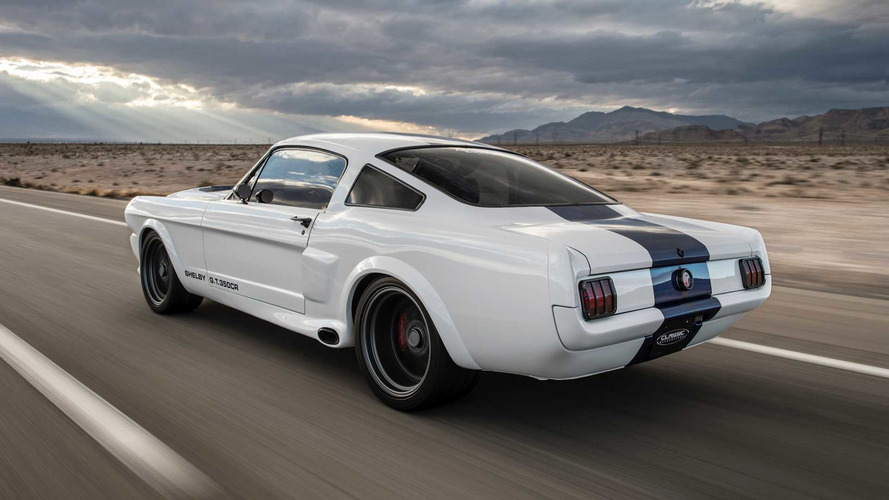 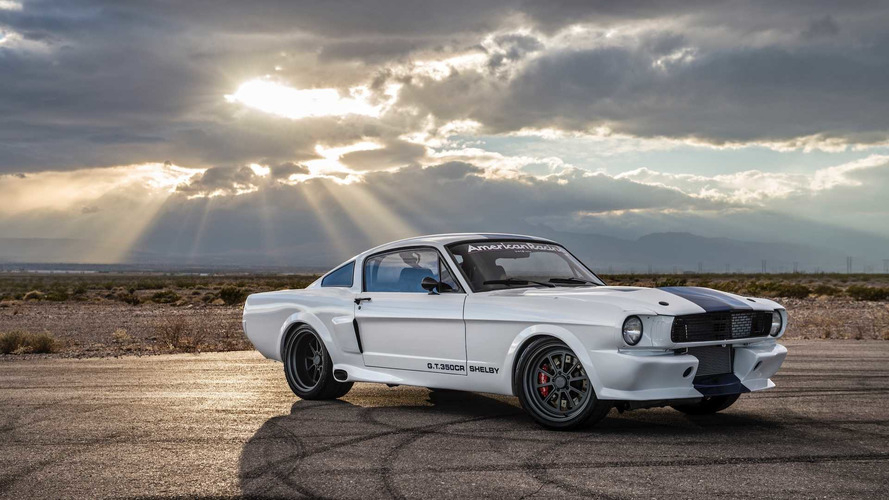 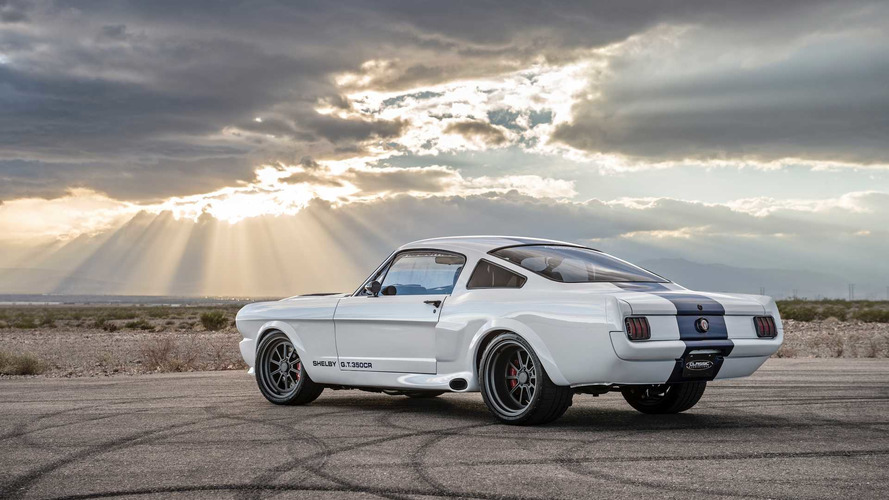 Pricing for the Classic Recreations Pro-Touring GT350CR Shelby Mustang starts at $169,000. Each car gets a spot in the Shelby American Worldwide Registry and is built to order with a wealth of options on tap for buyers, including an available no-charge swap to a 4R70W automatic transmission for folks who’d prefer not to row their own, as well as a host of available upgrades like 1,000-hp biturbo setups, high-end audio systems, full custom paint and interior options, and other tweaks.

While reinventing the past doesn’t come cheap, there’s something to be said for a build that’s this capable and well-sorted right out of the box, especially for those among us who have the means and prefer to spend their time driving rather than wrenching.