Opulent AF: I went tailgating in a $300,000 Bentley Bentayga 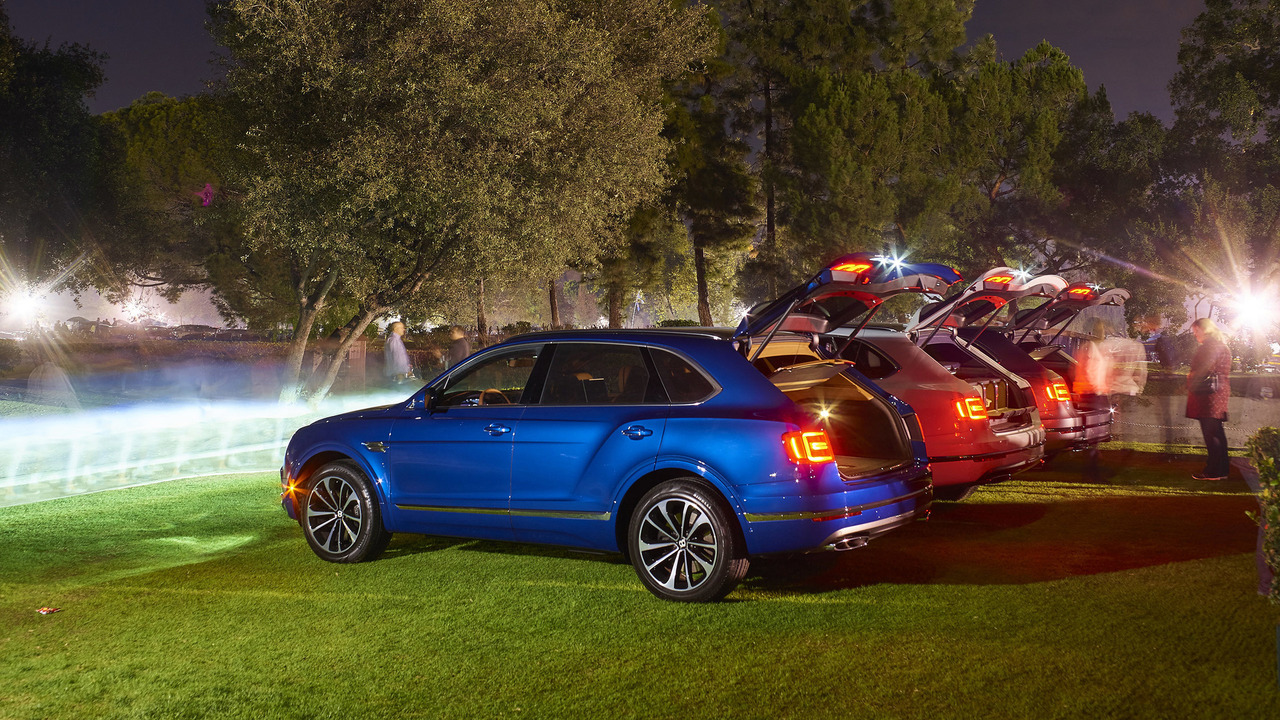 A functional and fancy party partner, whether you’re sipping champagne or pounding brewskis.

I think UCLA won? I don’t know. To be honest, I peaced out around halftime because football bores me. Even after four years of marching band (drumline!) in high school, where I had to attend every single home football game, I never really figured out how it all works. Frankly, I cared more about trying to bum cigarettes from older kids under the bleachers. I like some sports, and I love watching drunk people get super worked up when their team doesn’t get the ball down the field, but football… meh. This time, I showed up because I was promised champagne. And a Bentley.

Not just any Bentley – the new, $230,000 Bentayga SUV, or nearly $300,000 all optioned out. A wonderful, comfortable, powerful brute that looks oddly at home, polished and posed outside the Rose Bowl stadium in Pasadena, California. In addition to being the brand’s first foray into the all-important sport-utility vehicle world, the Bentayga opens Bentley up to a new set of active-lifestyle customers – it’ll go off road (ish), it’ll hold four people and luggage, and it’ll look fancy as hell running up the gravel road to your summer home on the lake.

But to the point of this story, it’ll work a treat outside a football game, and not just because it’s a sweet way to show off to all the other pre-gaming patrons. Call them flashy or gaudy, your Bentayga experience isn’t complete without a number of accessories that make it useful for chugging beers with your buds in the great outdoors.

I’m not just talking about the outrageously expensive ($32,000!) Mulliner Picnic Hamper, though that’s a fantastic place to start. More than just a Bentley booze box, the picnic hamper is an exquisite, leather-wrapped, three-piece storage set that latches into a specially designed tray in the Bentayga’s cargo hold. One compartment comes with plates, cups, and saucers sourced from French porcelain-maker Havilland, with silvery cutlery provided by Alta Robbe and Berking. Behind door number two you’ll find a set of four crystal champagne flutes, designed by David Redman of London, beautifully perched aside two bottles of chilled champagne. And because your aristocratic arse needn’t get dirty during the picnic (or tailgate), the third bin contains a Mulliner cashmere rug.

But why sit on the ground, when you can option your Bentayga with the $3,200 Event Specification? Think of it as the comfiest tailgate seat around. Forget the flimsy-ass folding chair – Bentley offers a leather, cushioned board that extends from a dock in the rear. You can even spec this in addition to the picnic hamper, should you require maximum outdoorsy dynamism, and it all latches and folds into the same tray in the cargo compartment. It’s a great place to sit should the weather turn sour, too – with the Bentayga’s electronic tailgate raised, you’ll stay dry while perched on the event seat. And after some very scientific testing, I can confirm that the fold-out seat is wide enough to comfortably hold two medium-sized, chamagne-soaked thirty-somethings.

The double-thick window glass keeps the outside world where it belongs, so I can’t hear the frat boys shouting obscenities at me.

Wanna get turnt with your favorite jams? Spec the optional Naim for Bentley stereo, $4,690. It’s not just about having 22 speakers – it’s the 1,950-watt amplifier that powers the experience, with a subwoofer in the trunk that gets its own, separate, 300-watt amp. Outside the Rose Bowl, a variety of music came through crystal clear, keeping our party going and making passers-by hella jealous. I’ve experienced the awesome Naim system on the road, with its bright sound quality and warm tone, but crank it to high volume in a tailgate setting, and none of that richness fades. Sure, you can wow your friends with Party Mode in a 4Runner, but no one will give a shit about your booming Toyota when, you know, a Bentley shows up.

Besides, if you follow in the footsteps of a number of UCLA and USC patrons who got too stupid drunk to even walk inside the stadium before the game, the Naim sound system will let you hear all that action-packed sports lingo from the comfort of wherever you managed to pass out, hopefully not anywhere near the Bentayga’s luxurious interior hides.

Despite leaving the game early, I still have to drive across the kinda-manicured Rose Bowl grounds, dodging drunk football fans and other cars with inattentive drivers. But behind the wheel of a Bentayga, everything’s cool. It’s quiet. It’s serene. The double-thick window glass keeps the outside world where it belongs, so I can’t hear the frat boys shouting obscenities at me. If my ass ever finds itself tailgating at a college sports event again, it’d better be with the comforts and conveniences of a Bentayga. I suppose a Mulsanne would be fine in a pinch, but I’d want one of those party hampers installed in the trunk.

Gallery: Tailgating in a 2017 Bentley Bentayga