“Go ahead and put it in Baja mode.” Baja mode. That’s what my instructor tells me as I point the Ford F-150 Raptor’s nose down the start of a 50-mile course carved out through the California desert. With a thumbs-up from the spotter, I’m off like a prom dress, and before I know it, doing 70 miles per hour over rocks and packed sand. I fly over enough small bumps and jumps that, by the end of the run, the FitBit on my wrist shows 11,000 steps I never actually took. I’m dodging shrubs, thrashing a 5,500-pound pickup like it’s indestructible. And hell, as far as I’m concerned, it might be. With so much capability packed into a vehicle this big and badass, it’s easy to assume a state of invincibility from behind the wheel.

But hold on, the Raptor’s story isn’t just limited to its crazy off-road abilities. No doubt, it’ll jump a dune and storm across sand better than any other brand-new, street-legal vehicle you can buy today, but it’s also super comfortable and packed with every modern convenience you could ask for. The high-speed off-road course out in Borrego Springs is indeed the highlight of my Raptor test drive, but here’s the real surprise: it’s silly good fun on paved roads, too. 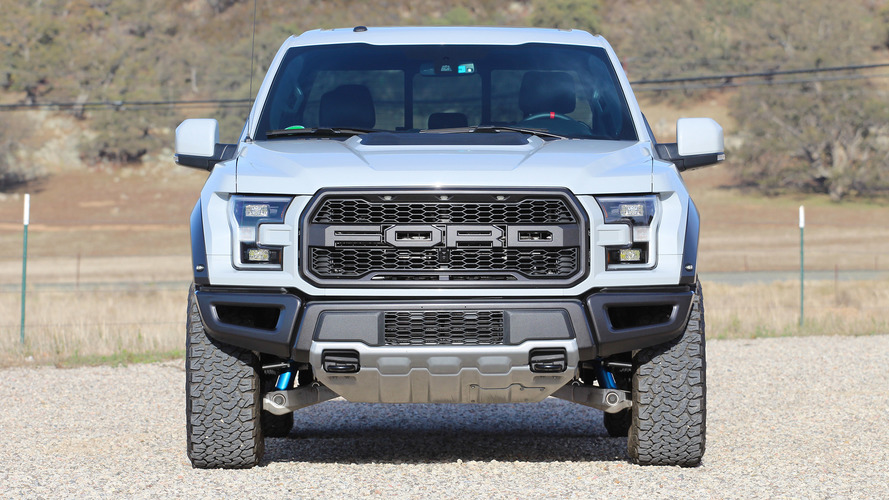 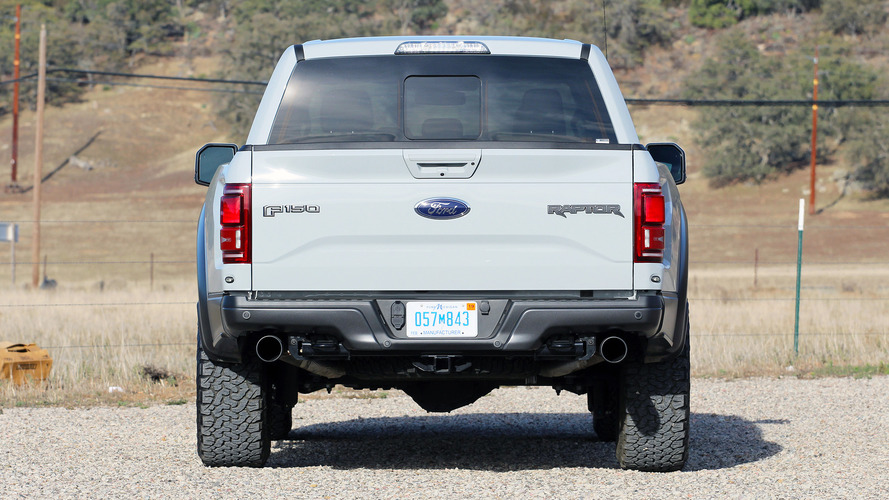 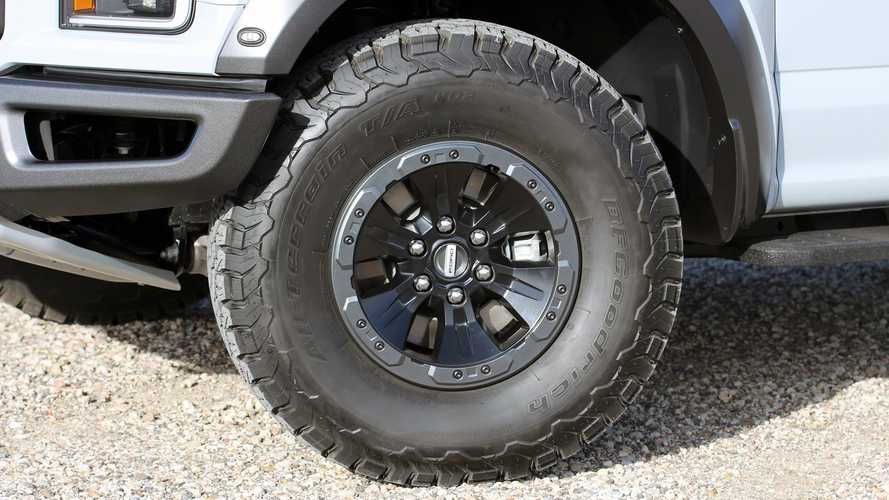 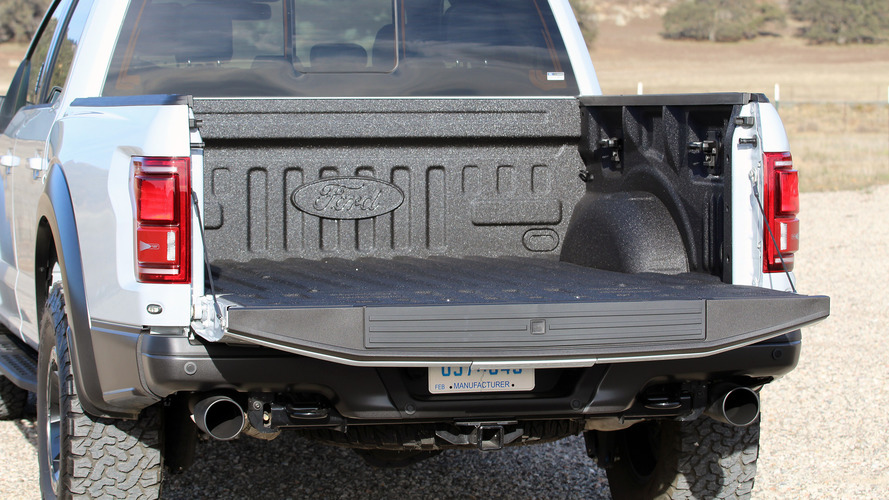 The high-speed off-road course out in Borrego Springs is indeed the highlight of my Raptor test drive, but here’s the real surprise: it’s silly good fun on paved roads, too.

As you’d expect, there’s immense power on hand. Ford’s biturbocharged 3.5-liter V6 works wonderfully under the Raptor’s bulging hood, with a healthy 450 horsepower available at 5,000 rpm and an even healthier 510 pound-feet of torque at 3,500 rpm. The Raptor has an additional 85 hp and 50 lb-ft compared to a standard F-150’s biturbo 3.5-liter V6; the increased output comes courtesy of higher boost from redesigned turbochargers. There’s a hearty, V8-like sound coming from the engine and the rear-mounted dual exhaust (this is the first F-150 to have pipes that go all the way to the rear bumper, by the way). That said, the sound is enhanced through the stereo speakers, just like in the regular F-150, because, well, that’s the world we live in now.

But we also live in the world of – and I can’t believe this is real – a 10-speed automatic transmission. This is Ford’s first application of this deca-cog gearbox, though for the 2017 model year, it’ll also be found in the standard F-150 with the 3.5-liter EcoBoost engine. It’s mostly smooth and settled in normal, around-town driving, but the 10-speed exhibits the same problem found in a lot of eight- and nine-speed transmissions: frequent hunting for the right gear. Toe in for a small amount of acceleration, and the truck will drop from ninth to fifth, or maybe fourth, or even sixth, or seventh. There are just too many gears here, with only small steps between them. And in the racier Sport and Baja drive modes, this transmission throws out the occasional harsh, abrupt shift, constantly moving up and down to find the sweet spot of the engine’s powerband. 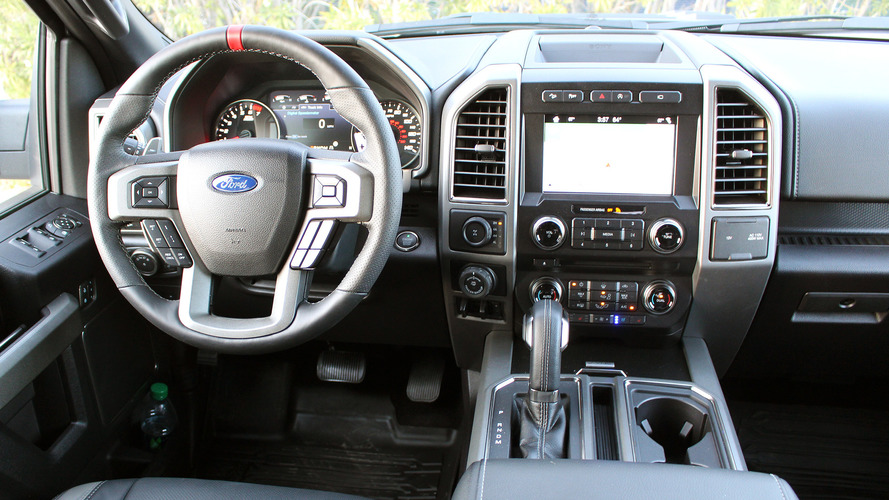 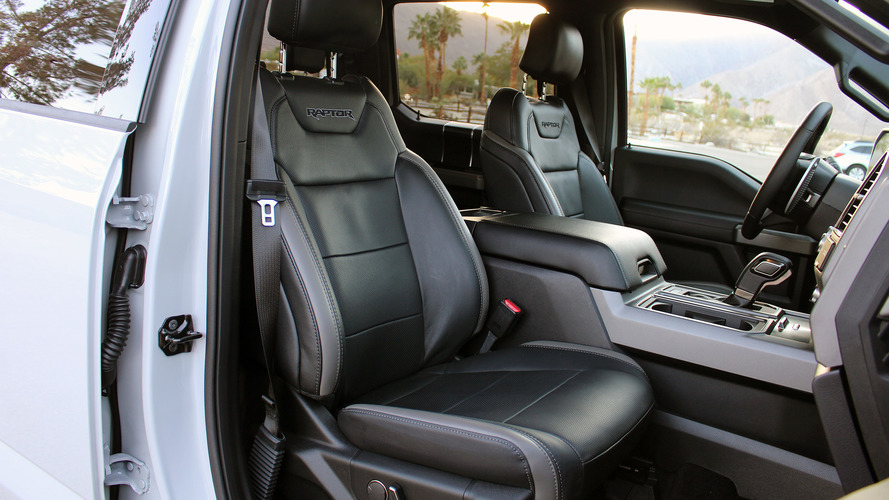 These leather seats are new, and Raptor-specific, with deep, comfortable bolsters.

On the other hand, the transmission will hold gears at high revs for long periods of time if you ask it to – running through the desert in Baja mode never saw anything higher than fifth gear, most of the time, with the engine constantly revving high. Steering wheel-mounted, magnesium paddle shifters offer an alternative for folks who want to row their own, but they’re slow to respond and the truck will automatically shut them off unless you put the transmission into its “M” setting (for “manual”). Even then, the paddles are kind of a chore to operate – when you want to quickly change to a lower gear, say for highway passing, you have to execute a quick flap-flap-flap-flap just to go from tenth to sixth.

The Raptor’s sophisticated suspension components have their obvious benefits given the truck’s intended off-road mission, but improvements have been made that help the truck’s on-road prowess, too. The three-inch diameter Fox Shocks are 44-percent larger than those on the outgoing Raptor, and feature hydraulic bump stops that keep the truck from bottoming-out while jumping in the desert. Overall suspension travel is increased by almost one inch at the front wheels and nearly two inches at the rear, meaning there’s greater ability for articulation while rock crawling. However, the ride quality is much smoother on paved roads – it never really feels overly trucky. Even the knobby, deeply treaded tires – LT315/70-series BF Goodrich KO2s – don’t cause too much roar on the highway, though, as you can imagine, overall levels of grip and steering feedback on-road certainly leave a lot to be desired.

I cannot stress enough how outrageously fun this truck is during high-speed off-roading, but it’s all incredibly easy to manage. That’s the best part: when the going gets tough, the Raptor’s four-wheel-drive system (which can actually act as a variable all-wheel-drive setup in Weather mode) always sets you up for success. From the driver’s seat, just manage your steering and throttle inputs, and leave the rest to the truck. 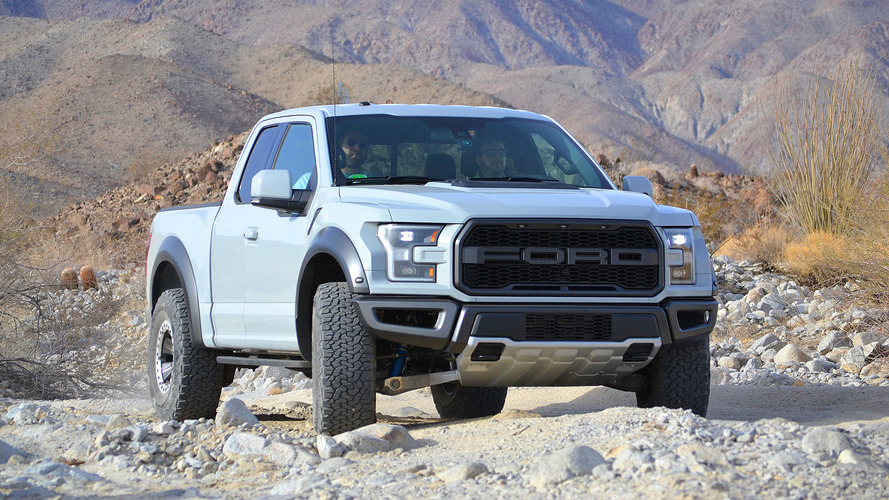 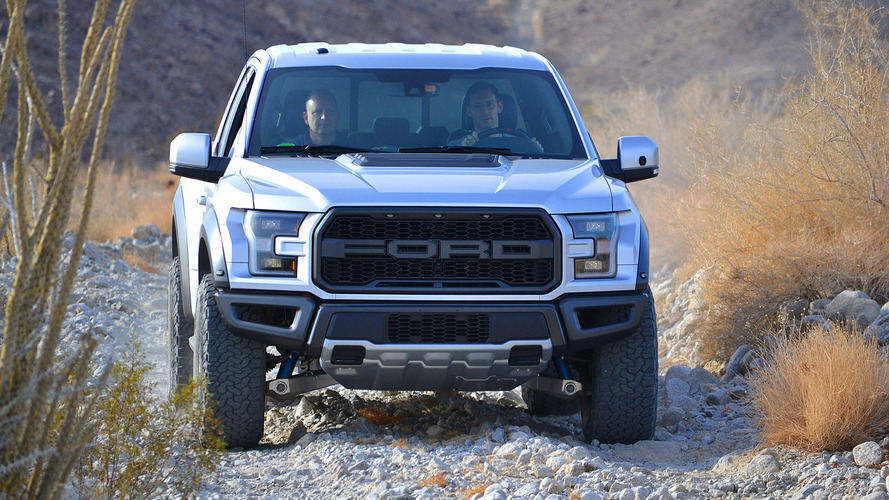 A variety of cameras, including two front-end views and a full 360-degree mode, help with overall visibility while trying not to scratch body panels on the sides of rocky ledges.

And still, drive the Raptor with verve on a winding road and you’ll be pleasantly surprised at how flat the body remains while cornering, and how the nicely weighted steering feels progressive and linear in action. A Toyota Tacoma TRD Pro pitches and dives and rolls around, but the Raptor is incredibly composed. It’s far better to drive than any other version of the F-150, and not just because it has more power.

The only issue after a long period of on-road use is brake fade – after a long downhill run going into Borrego Springs, the brakes feel mushy and lack stopping power. The Raptor’s brakes are unchanged from the base F-150, despite its added power and weight. These stoppers are fine most of the time, and work well during slower-speed, off-road stuff, but the noticeable fade after just two hours of semi-aggressive driving on the route from San Diego to Borrego Springs is a sour point.

Speaking of the slow, off-road stuff, I don’t need to tell you that although the Raptor is outrageously comfortable, its ability to blaze trails is limited by its sheer size. This truck is taller, wider, and longer than the outgoing model, and it’s not what I’d call nimble. Thankfully, a variety of cameras, including two front-end views and a full 360-degree mode, help with overall visibility while trying not to scratch body panels on the sides of rocky ledges. Put this thing into Sand/Mud or Rock Crawl driving modes, let the truck adjust its powertrain and four-wheel-drive systems accordingly, and go with grace. It’s a Ford Raptor. There is nothing it cannot do. 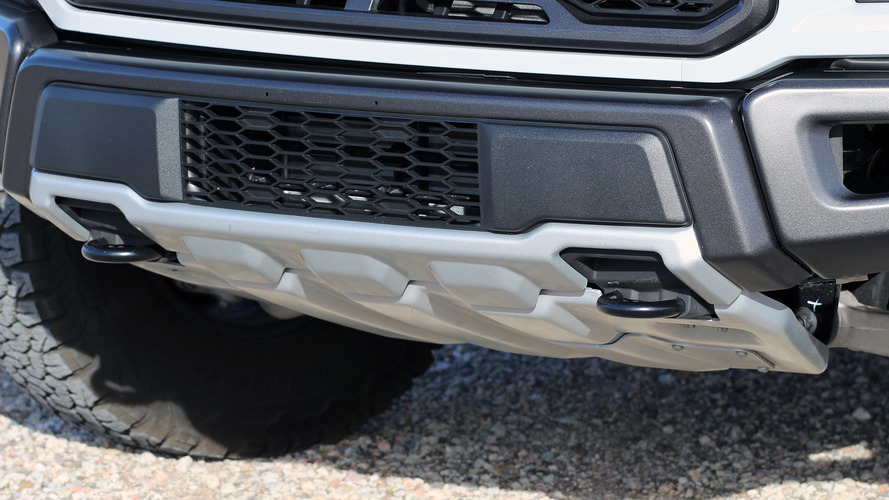 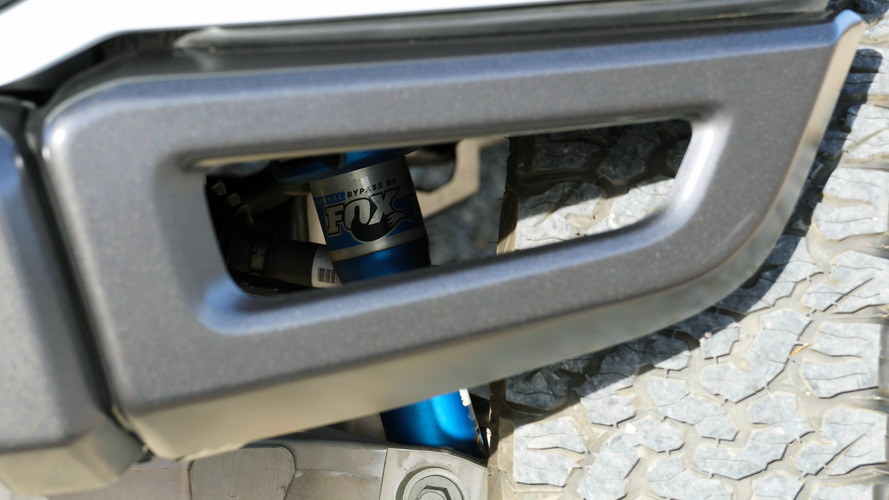 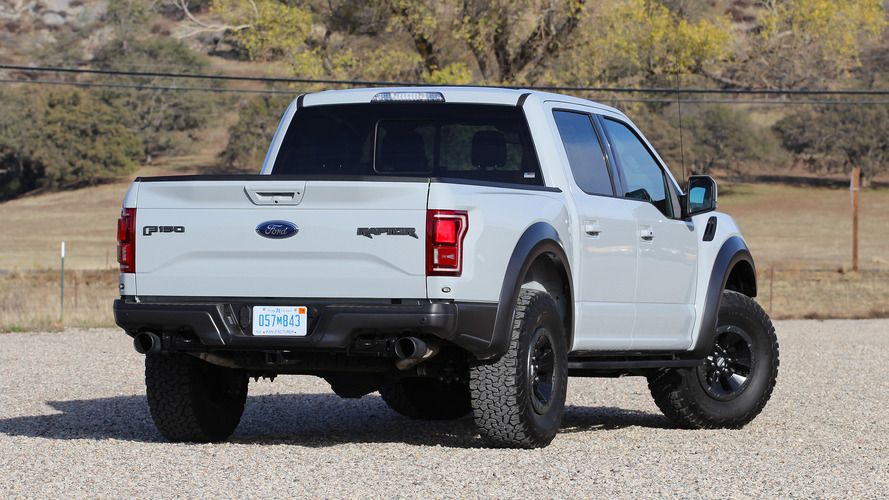 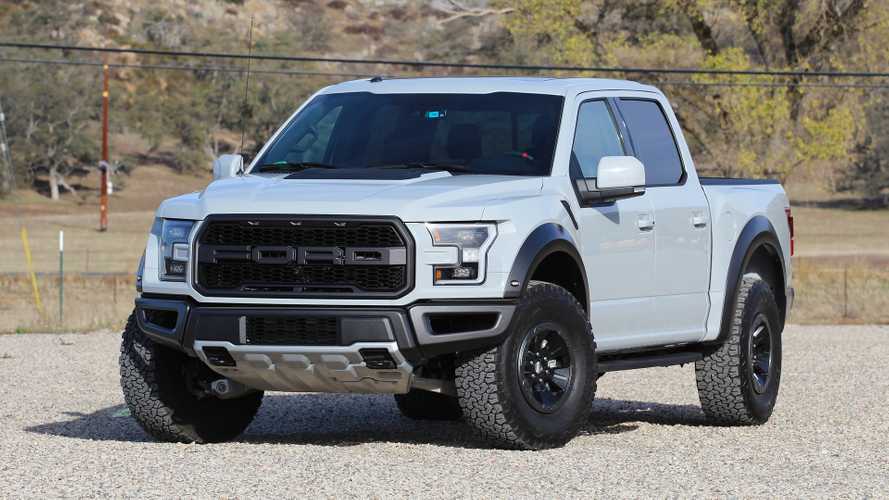 You don’t have to be baja-blasting or boulder-crawling to experience all of the Raptor’s inherent awesomeness.

Like the outgoing model, the new Raptor can be had in SuperCab or SuperCrew body styles, the latter of which offers comfortable rear accommodations for three adults. The cab itself is the only carryover body part from the stock F-150 – everything in front of the A pillar and rear of the cab is unique to the Raptor, and jeez, this thing sure looks cool. A choice of 17-inch alloy wheels are available, including a beadlock design. And you certainly won’t mistake Raptor for anything but a Ford truck, thanks to the prominent grille and optional tailgate badging. Designer Gordon Platto reminds me that every single vent and scoop and opening on the truck is purely functional, right down to the openings that flank the lower front fascia and give an awesome view of those bright blue Fox shocks.

Inside, you’ll find the same interior design and layout as the standard F-150. These leather seats are new, and Raptor-specific, with deep, comfortable bolsters, not to mention heating and cooling. Otherwise, it’s business as usual, with tons of storage in the center console, Ford’s Sync 3 infotainment system, and for the Raptor, a row of integrated auxiliary switches for customers who upfit their trucks with aftermarket equipment. And let’s not forget, it’ll still do truck stuff, albeit not as well as a stock F-150: both cabs get the 5.5-foot bed and their payload capacity is rated at 1,000 pounds for SuperCab and 1,200 pounds for SuperCrew, and towing is rated at 6,000 and 8,000 pounds, respectively. Pricing starts at $48,325, and a loaded-up SuperCrew will top out around $65,000.

That’s a lot of money for an off-road toy, but the Raptor is functional and flexible enough that you can use it as your only vehicle. You don’t have to be baja-blasting or boulder-crawling to experience all of the Raptor’s inherent awesomeness. Ford knows that, too – the automaker admits a good chunk of Raptor buyers never actually take their trucks off road. Seems legit, but man, those folks are missing out. Go ahead and put it in Baja mode and point it toward the horizon. Trust me.