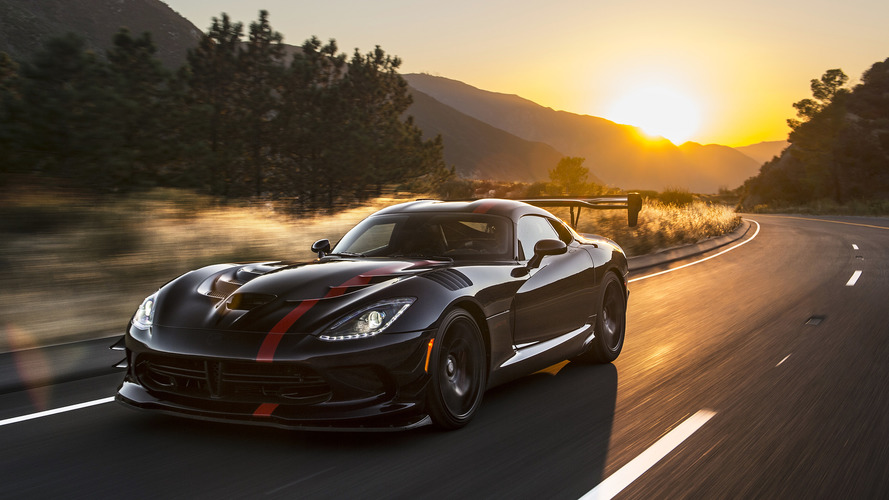 Piloting the ACR around SoCal has us misty about the man we lost and the car we’re losing.

In 1963, Dave Friedman took a photo of Carroll Shelby standing outside the one-year-old headquarters of Shelby American on Princeton Drive in what was then Venice, California. The 40-year-old Texan, smiling for good reason, posed with three of his finest, fiercest children, all of whom happened to be named “Cobra.”

A month ago I stood outside those same headquarters, just a ten-minute walk from my apartment. It’s still a red brick building with a garage door and an exit on the west corner, but the business inside now deals in shoes. I had only one car with me, a Dodge Viper ACR, come to bow a head and a couple of headers to the birthplace of its progenitor. If this were Greek mythology, the Cobra would play the primordial deity Chaos, responsible for birthing a pantheon of Titans over the last six decades. While Shelby is most closely linked with Ford through such divinities as the GT40 and GT350, however, the Dodge Viper is the Cobra’s closest descendant.

How so? In February 1988, Chrysler president Bob Lutz told chief of design Tom Gale, “We really ought to kick off doing a project like a reborn Cobra.” Five years later, the original Viper answered that proposition with two seats, no roof, a giant engine sardined into the front of a tiny body, unthinkable turns of speed, and handling kindly described as adventurous. Although separated by an era and a name, the Viper was clearly defined by the same Suborder: Serpentes as the Cobra. It even followed the same evolutionary track: as the Cobra became the hard-topped, Kamm-tailed Daytona Coupe – originally called the Cobra Daytona Coupe – the Viper evolved into the closed-cockpit Viper GTS.

The Viper ACR possesses the sharpest and most virulent bite among its brethren.

The addition of a solid roof, mod-cons like ABS, and slightly better manners haven’t dulled the fangs, and the Viper ACR – mine wearing the optional, extreme aero kit – possesses the sharpest and most virulent bite among its brethren. I spent seven days being bitten, and I still haven’t got over the effects of it.

Although those bites didn’t hurt, they did take getting used to. We know of several manufacturer offerings labeled “race cars for the road,” suggesting some light massage that prepares a track beast for residential duty. The Viper ACR, on the other hand, is a low-fat race car Dodge happened to leave out on the road. The steering, six-speed shifter, and clutch dial up so much resistance that Dodge could charge a monthly membership to The Viper Gym. The solid buttresses behind the side windows, plus the wing supports, prevent the words “three-quarter” and “visibility” from ever meeting.

And yet, at least below 3,000 rpm, the exhaust note inside the cabin isn’t merely boring, it’s The Man in the Gray Flannel Suit eating a cheese sandwich – American cheese – chased with a glass of tap water.

No reptile outside of Godzilla gets this much attention or breathes this much fire.

The 8.4-liter V10 turns the footwells into convection ovens. On a sunny SoCal day, one passenger asked me, “Why’s the heat on?” I replied, “Because the engine’s running.” Put a whole chicken in a casserole dish on the passenger-side floor and head out on a two-hour road trip, baste with butter during fuel stops, and dinner will be ready at your destination. And there will be many fuel stops. The EPA rates the Viper at 21 highway miles per gallon; with the 16-gallon tank, you should be good for north of 300 miles after a fill-up. That, however, assumes sane motoring throughout those 16 gallons, when sane motoring is impossible in the Viper ACR – the math and the mechanicals won’t allow it.

There’s 645 horsepower and 600 pound-feet of torque on the input side of the How-to-Get-Your-Kicks Flow Chart, and a rear set of 335-series, specially-developed, “nominally street-legal” Kumho Ecsta V720 rubber on the output side. In between is the most capable-yet-capricious Bilstein suspension we’ve ever encountered.

After leaving Shelby’s old HQ in Venice I drove to Westchester, near LAX, where Shelby rented a warehouse as his operation grew. That warehouse likewise houses a new business, but the West Imperial Highway might be topped with the same tarmac Cobras tested on. It’s terrible. Incredibly, the Viper ACR’s suspension has an appetite for nasty roads; this isn’t a Charger, but the ride isn’t harsh on everyday streets. Considering the Viper ACR’s settings and abilities, the ride is pretty good.

The Viper takes muscle to operate, but that operation is so well balanced.

Hit a certain kind of sharp bump on the highway, though, and all the Viper’s tires leave the ground. I found this out while driving to the former site of the Riverside International Raceway, where Cobra dominance compelled Ford to first support Shelby, then install him as head of its GT40 racing program. Every time the Viper bounced I hit my head on the ceiling, and thought to remind Dodge to sell the ACR with a six-point harness or cushioned quilting on the cabin roof. Around LA it took but one airborne fling to memorize a launch spot, but when on road trips – and I took several in the Viper – I simply had to be ready for anything. The car handles such incidents as if nothing happened, but it’s odd to be in mid-sentence with a passenger at 70 mph, then be in the air instructing, “Tray tables up!”

On regular, semi-smooth roads, ideally ones running off into the distance looking like discarded vermicelli, the Viper ACR injects a driver with exuberance-inducing toxins. Driven with confidence and respect, the coupe doesn’t startle anymore. Long, linear accelerator travel brings honest progress, 600 pound-feet moving 3,374 pounds makes that progress righteous. The 295-section front tires turn in with instant, predictable conviction. The giant carbon-ceramic brakes squeal at city speeds, yet when hit hard they get an R rating for brutal violence totally unsuitable for children. Idle burbles at a limbo-worthy 700 rpm. Run that monstrous motor from 3,500 to its 6,250-rpm limit, and the sidepipes finally do proper aural work.

The Viper takes muscle to operate, but that operation is so well balanced. You can’t help but test it all out, repeatedly, which is why you’ll also never see the EPA mileage rating. During my week with the Viper ACR, I did all my shopping one item at a time. That gave me a reason to wring the car out every day between my apartment in Venice and my new favorite grocery store, which – for the week I had the Viper ACR – was in The Valley, 45 miles away, on the other side of several twisty canyon roads. Now that I don’t have the Viper, my favorite grocery store is four flat city blocks hither.

The last Viper off the production line next year shuts the garagiste barn doors on a particular kind of flamboyant Americana the car world will be worse off without.

This car surprised me. I planned to write a story about the Cobra and all that car has given us, but seven minutes behind the wheel of Dodge’s real dart changed my focus entirely. The Viper ACR is hard to see out of, its heavy controls and notchy Tremec gearbox make it demanding to drive at all, the long nose and wide stance make it challenging to drive quickly on narrow roads. It was designed for a cartoon character, so low and wide and swoopy that its design aesthetic could be called “Sexy Pancake with a Wing.” It sticks to the road, and it – literally – flies. You need to roll down the window to enjoy the exhaust note in town. It drinks all your gas money, then beats you up and steals your lunch money so it can get more gas. Going anywhere takes 30 minutes longer than planned because everyone will stop you to ask a question and make a statement: “That’s not a Corvette, is it?”, then, “That thing looks amazing.” No reptile outside of Godzilla gets this much attention or breathes this much fire. The trunk is a couple of awkwardly shaped shoeboxes (but this race car has media ports, pockets, two cupholders, a real glovebox, and will read your text messages to you). Passengers who don’t know better will burn their legs on the sidepipes.

And I have to have one. After seven days and more miles than I’ve put on any other press car all year, I have a single complaint about the Viper ACR: the lightweight, three-speaker stereo stinks. But I can live with that.

It is a travesty that Dodge needs to kill the Viper. Where else can you find a car attached to a wing, powered by a steamship engine, smoking two enormous wheels well over the edge of baroque insanity while the other two wheels cling with their enormous grip to the surprising truth that it’s really not as crazy as it looks? The last Viper off the production line next year shuts the garagiste barn doors on a particular kind of flamboyant Americana the car world will be worse off without. A kind of Americana the Cobra created, in fact. So it’s fitting that the Viper will end it. And be sorely missed.