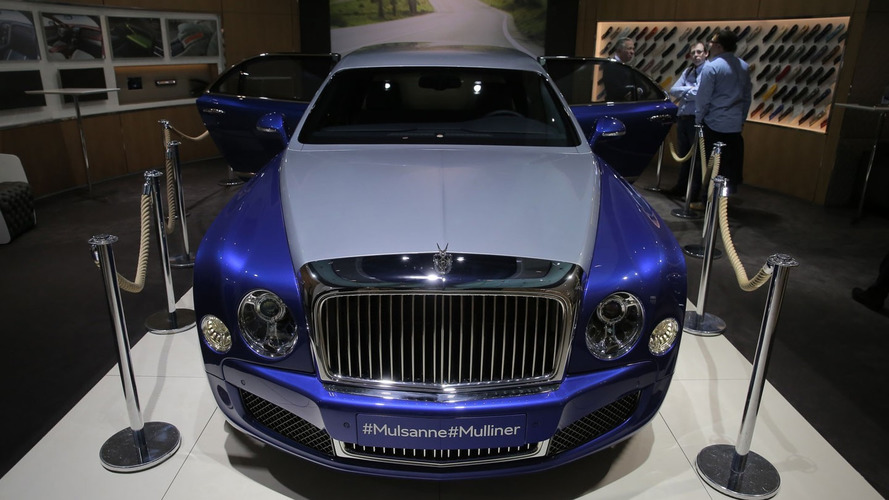 A long name for a very long car, the Bentley Mulsanne Grand Limousine by Mulliner has arrived in Geneva to show the epitome of luxury according to Crewe’s vision.

A long name for a very long car, the Bentley Mulsanne Grand Limousine by Mulliner has arrived in Geneva to show the epitome of luxury according to Crewe’s vision.

Compared to the regular Mulsanne, the extended version is 39 inches (one meter) longer and 3.1 inches (79 mm) taller to enable a more spacious interior cabin which according to Bentley has a seating configuration found in private planes. It’s the first model from Bentley to make use of electrochromic (aka “smart glass”) technology which offers those inside the possibility to choose between a clear or an opaque window glass by simply pressing a button.

Besides this nifty gimmick, the elongated Mulsanne comes with a newly developed HVAC system created by Mulliner with a focus on the rear seats. It also benefits from iPad charging and docking stations, fold-out tables, bottle cooler (with frosted glass and crystal flutes), and even a soft drink cabinet. Moreover, there’s an intercom system to grant communication between the driver and those relaxing in the back.

As far as the exterior is concerned, the Mulliner-prepared stretched Mulsanne has a two-tone Silver Frost & Moroccan Blue paint and an elegant Flying “B” mascot engraved with “Coachbuilt by Mulliner.” The chrome grille and lower bumper grilles have been designed specifically for this model, just like the 21-inch wheels which are color-matched to the body.

Bentley mentions its engineers did more than just stretch the body as the engine, gearbox, suspension and chassis have all been optimized to match the larger footprint.

We don’t know how much it costs, but we can tell you the Mulsanne Grand Limousine by Mulliner is not just for show as it was actually privately-commissioned by a wealthy buyer.